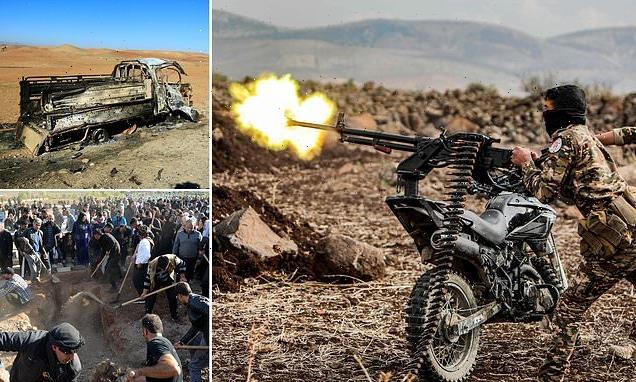 Turkey’s warplanes crossed into Russian and US-controlled airspace for the first time to attack the Kurdish YPG militia in Syria, as the Kremlin urged restraint and called on Ankara to avoid an escalation.

President Recep Tayyip Erdogan hinted at a possible new ground offensive in Syria against Kurdish militants on Tuesday, seemingly in revenge for a terrorist attack carried out in the centre of Istanbul on November 13, though Kurdish groups held responsible have denied involvement.

Kremlin spokesman Dmitry Peskov urged Ankara to ‘refrain from steps that could lead to a serious destabilization of the situation in general’ on Tuesday.

‘It can come back as a boomerang,’ Peskov added.

A Syria war monitoring group said 35 people were killed in Turkish airstrikes over the weekend — 18 Kurdish fighters, 16 Syrian government soldiers and a journalist.

The F-16 jet raids happened in the last few days as Turkey and the YPG escalated tit-for-tat strikes that have killed civilians on both sides of the border.

Kurdish-led Syrian Democratic Forces later said fresh Turkish airstrikes on Tuesday struck a base the group shares with the US-led coalition in the fight against the Islamic State group.

‘We have been on top of the terrorists for the past few days with our planes, artillery and drones,’ Erdogan said. ‘As soon as possible, we will root out all of them together with our tanks and soldiers.’ 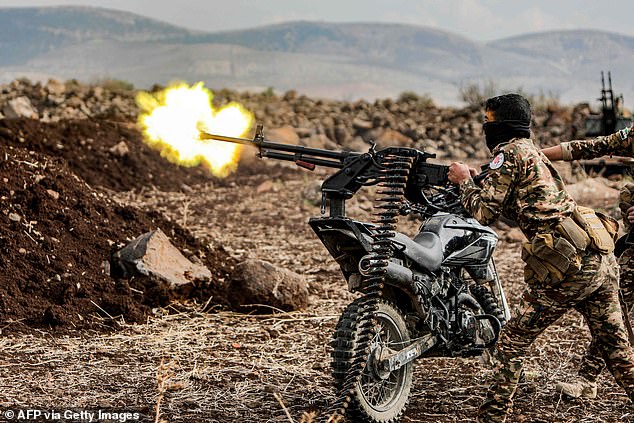 A Syrian fighter backed by Turkey fires a machine-gun mounted on the back of motorcycle in northern Syria as part of a training exercise. Erdogan said he will root Kurdish ‘terrorists’ out ‘with our tanks and soldiers’, signaling his intent of a new operation in northern Syria 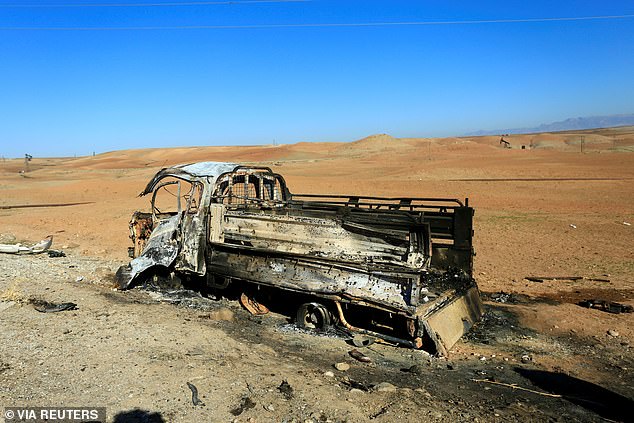 A view shows the aftermath of airstrikes which Turkey’s defence ministry says it carried out in Derik. Turkey’s warplanes crossed into Russian and US-controlled airspace for the first time to attack the Kurdish YPG militia in Syria, as Russia urged restraint and called on Ankara to avoid an escalation 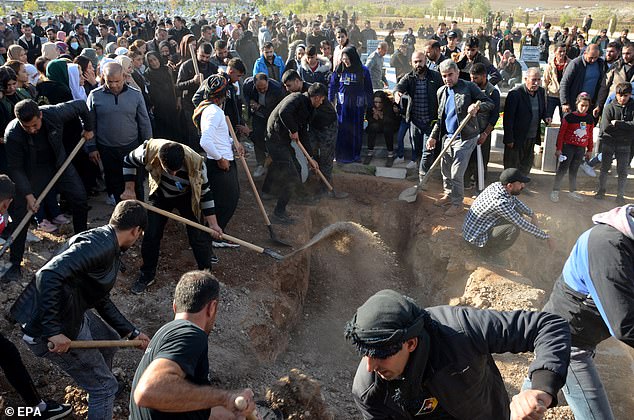 Syrian Kurdish men bury the bodies of Turkish airstrike victims during a funeral. A Syria war monitoring group said 35 people were killed in Turkish airstrikes over the weekend — 18 Kurdish fighters, 16 Syrian government soldiers and a journalist

Erdogan continued: ‘From now on, there is only one measure for us. There is only one border. (And that is) the safety of our own country, our own citizens. It is our most legitimate right to go where this security is ensured.’

The base is just outside the town of Qamishli, 30 miles from the Turkish border. Two SDF fighters were killed and three were wounded, the group said.

Erdogan vowed Tuesday that Turkey would ‘soon’ unleash a ground operation into Syria against Kurdish targets in defiance of mounting international pressure.

Ankara has called the air strikes part of Operation Claw-Sword, a new offensive against Kurdish militias launched in April — hitting dozens of Kurdish targets across Iraq and Syria.

The US embassy in Syria said: ‘We offer our sincere condolences to the families of those civilians killed in northern Syria over the weekend. We urge de-escalation and above all protection of civilians and civilian infrastructure.’

In a veiled threat to Washington, Erdogan said his government knew ‘who protects, arms and encourages those terrorists’.

The US relied heavily on Syrian Kurdish forces in the fight against the Islamic State group.

‘The road has come to an end for those who think they can keep Turkey waiting by playing with letters and changing the name of the terrorist organisation,’ said Erdogan.

Turkey has conducted several large operations into northern Syria in recent years using drones, but it  previously stopping short of sending jets due to Washington and Moscow, allied with the YPG-led Syrian Democratic Forces (SDF), and Syrian president Bashar al-Assad respectively, controlling much of the airspace.

‘We will, of course, call on our Turkish colleagues to show a certain restraint in order to prevent an escalation of tension, and an escalation of tension not only in the north, but also in the entire territory of Syria,’ Russian envoy Alexander Lavrentyev was quoted as saying by the Russian state news agencies in the Kazakh capital Astana. 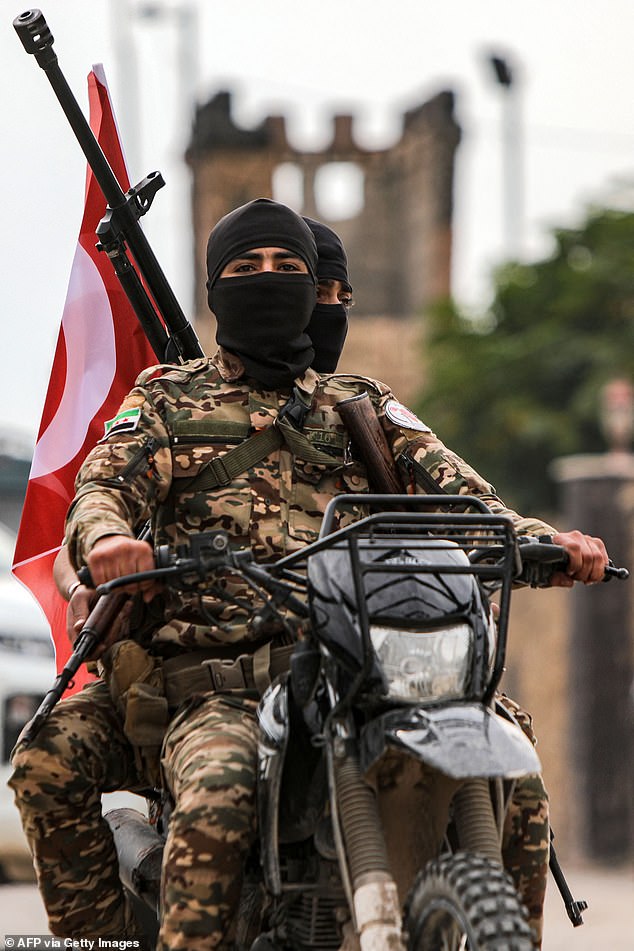 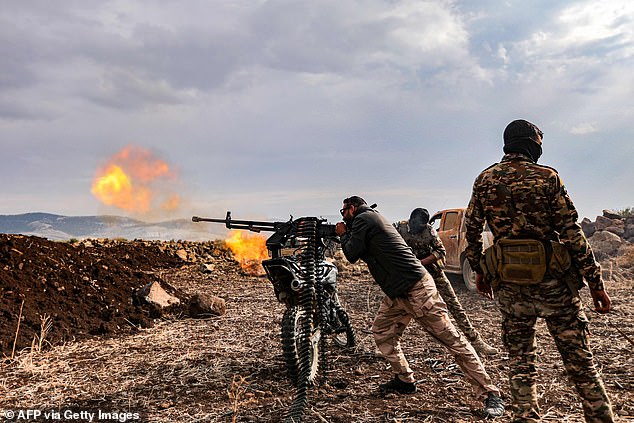 Turkish officials claimed 89 targets were destroyed and many militants were killed in the strike. Russia and the US fear Turkey is gearing up for a new offensive in northern Syria

Russia supports Syrian President Bashar al-Assad in the country’s 11-year war, while Ankara has backed rebels fighting to topple him.

Turkey has launched three major incursions into northern Syria since 2016 and already controls some Syrian territory in the north.

Following the weekend’s airstrikes from Turkey, suspected Kurdish militants in Syria fired rockets Monday across the border back into Turkey, killing at least two people and wounding 10 others, according to Turkish officials.

Three more rockets were fired on Tuesday, but caused no damage or injuries, the state-run Anadolu Agency reported.

While Kurdish-led forces in Syria have not claimed responsibility for the attacks, the SDF on Monday vowed to respond to Turkish airstrikes ‘effectively and efficiently at the right time and place’.

The Turkish warplanes attacked bases of the outlawed Kurdistan Workers’ Party (PKK) and the YPG on Saturday night and on Sunday.

Turkish officials claimed that 89 targets were destroyed and many militants were killed. 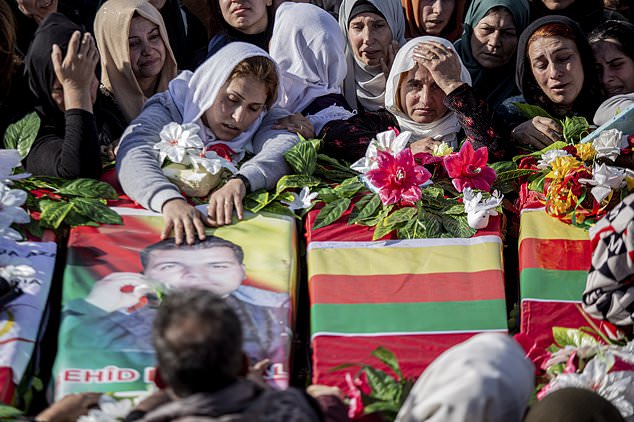 Syrian Kurds attend a funeral of people killed in Turkish airstrikes in the village of Al Malikiyah , northern Syria, November 21 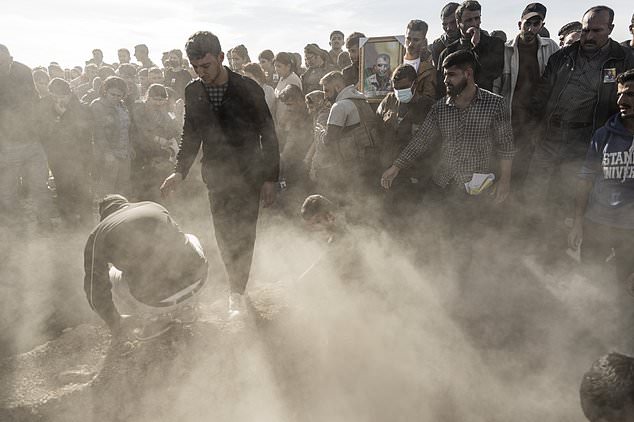 The airstrikes, which Turkey said were aimed at Kurdish militants whom Ankara blamed for a deadly November 13 bombing in Istanbul, also struck several Syrian army positions in three different provinces along the border with Turkey

The air strikes targeted Kobani, a strategic Kurdish-majority Syrian town near the Turkish border that Ankara had previously attempted to overtake in its plans to establish a ‘safe zone’ along northern Syria.

Also Tuesday, German Interior Minister Nancy Faeser reiterated during a joint news conference with her Turkish counterpart that Berlin stands with Turkey in the fight against terrorism, but said Turkey´s response to attacks must be ‘proportionate’ and mindful of civilian populations.

The Istanbul bombing killed six people and wounded more than 80 others.

‘They want to establish a terror state around us, we cannot allow that. It is our duty to protect our borders and our nation,’ he said.

Turkey’s defense minister meanwhile, renewed a call for the United States and other nations not to back the Syrian Kurdish militia group, YPG, which Turkey regards as an extension of the PKK.

‘We express at every level that “PKK equals YPG” to all our interlocutors, especially the United States, and constantly demand that all support to terrorists be cut,’ Hulusi Akar told a parliamentary committee.

Ankara and Washington both consider the PKK a terror group, but disagree on the status of the YPG Under the banner of the Syrian Democratic Forces, the YPG has been allied with the US in the fight against the Islamic State group in Syria.

The PKK has fought an armed insurgency in Turkey since 1984. The conflict has killed tens of thousands of people since then.