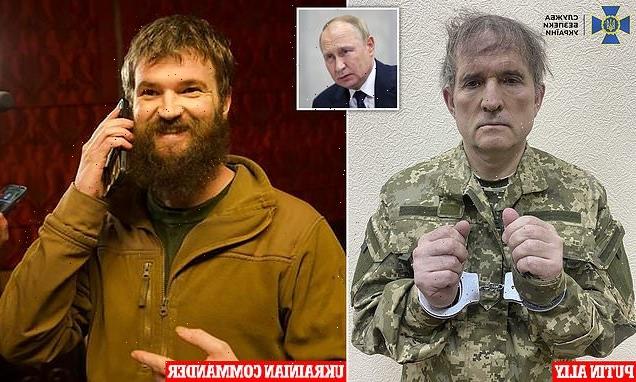 A key Putin ally who chose the Russian leader to be godfather to his daughter has been freed as part of a prisoner swap which has seen Azov battle commanders and 10 foreign nationals released.

Russia has freed 215 Ukrainians it took prisoner after a protracted battle for the port city of Mariupol earlier this year, including top military leaders, a senior official in Kyiv said on Wednesday.

The freed prisoners include the commander and deputy commander of the Azov battalion that held out in the city’s steelworks for weeks, said Andriy Yermak, the head of President Volodymyr Zelensky’s office.

The move comes as a surprise after Russian-backed separatists last month said there would be a trial of Azov personnel, who Moscow describes as Nazis. Ukraine denies the charge.

Also at liberty is Serhiy Volynsky, the commander of the 36th Marine Brigade of the Ukrainian Armed Forces.

The three men had helped lead a dogged weeks-long resistance from the bunkers and tunnels below Mariupol’s giant steel works before they and hundreds of Azov fighters surrendered in May to Russian-backed forces. 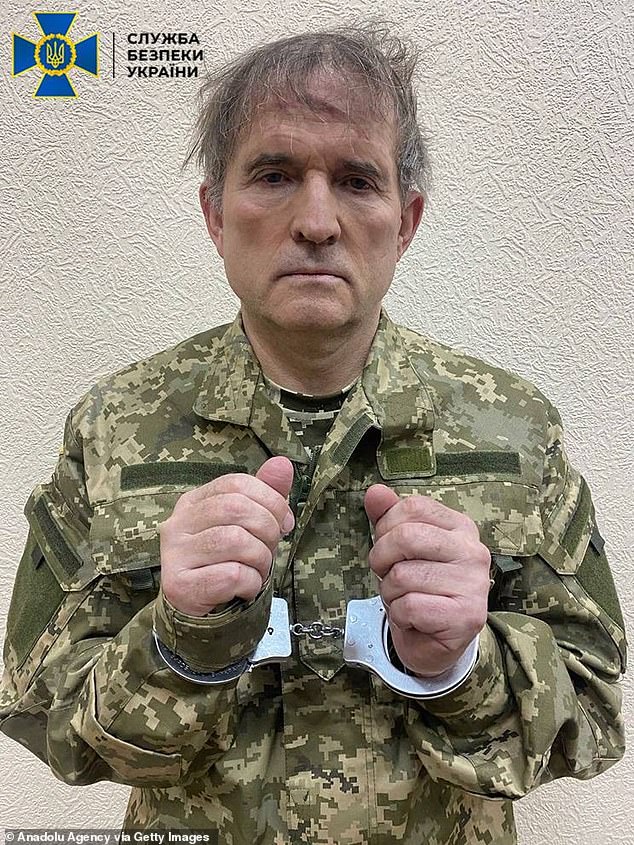 Viktor Medvedchuk, who is said to be a close friend of Vladimir Putin, shortly after his arrest 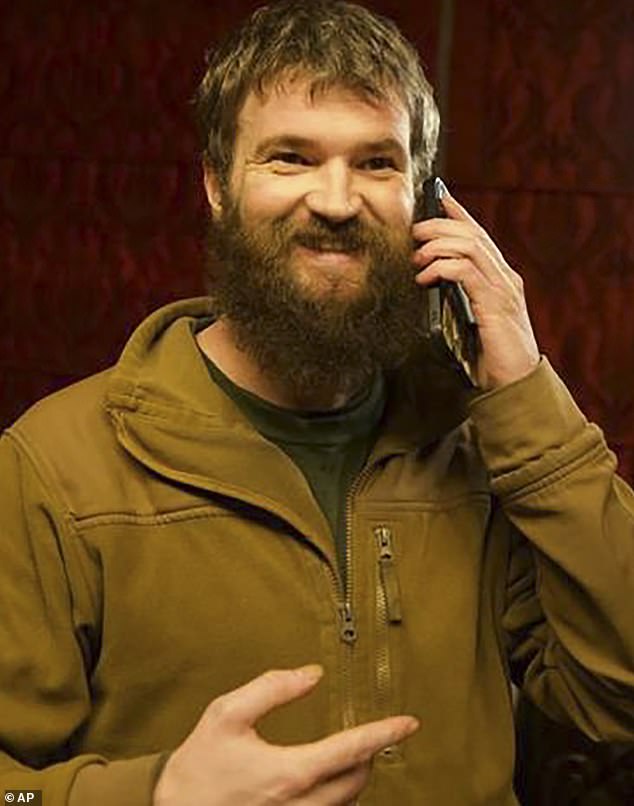 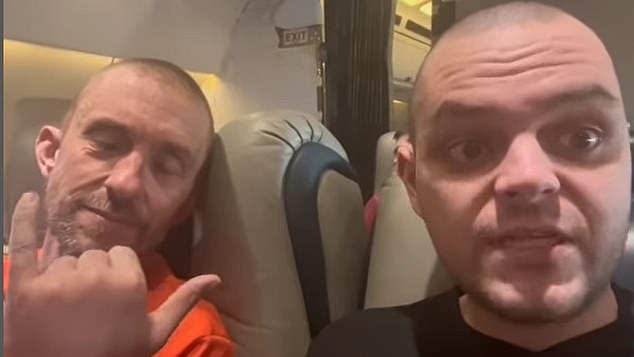 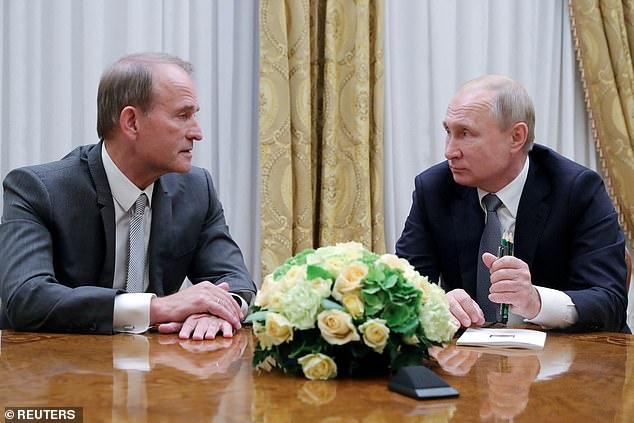 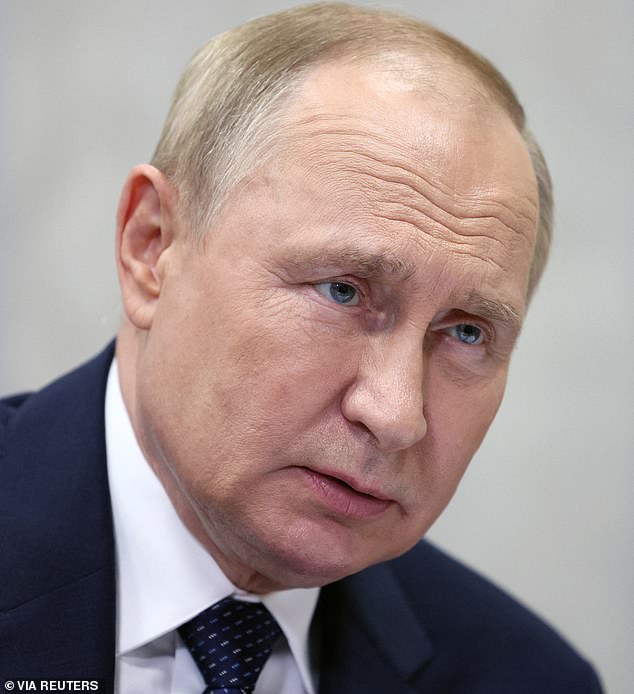 Putin today threatened the west as he mobilised 300,000 reservists for the Russian Army 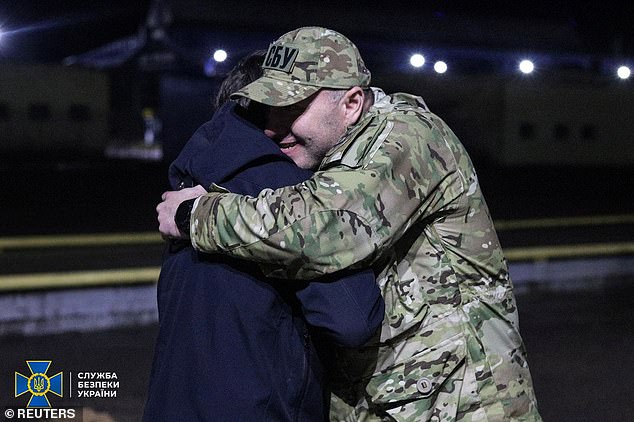 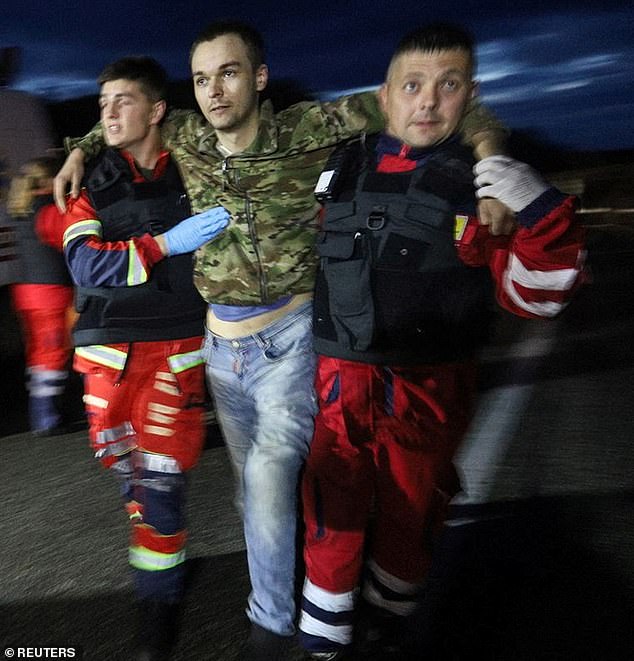 Yermak said that in return, Kyiv had freed 55 Russian prisoners as well as Viktor Medvedchuk, the leader of a banned pro-Russian party who was facing treason charges.

Medvedchuk was arrested in April as he attempted to flee Ukraine and meet up with Russian FSB intelligence agents in Transdniestria.

The Ukrainian lawmaker and tycoon, one of the country’s richest people, is known for his close ties to Putin and says the Russian leader is godfather to his youngest daughter, Darya.

Ukrainian President Volodymyr Zelensky previously offered to swap him for Ukrainians captured by Russia, but Kremlin spokesman Dmitry Peskov had said Medvedchuk had ‘nothing to do with the special military operation.’

‘He is a foreign politician,’ he told reporters, adding that the Kremlin was not aware if Medvedchuk wanted Moscow to be involved.

‘Medvedchuk has never had any behind-the-scenes relations with Russia,’ Peskov added, implying that he would otherwise have left Ukraine before Moscow sent in troops.

Medvedchuk is a hugely controversial figure because of his close ties to Moscow.

He had been under house arrest since 2021 on treason charges over accusations that he tried to steal natural resources from Russia-annexed Crimea and hand Ukrainian military secrets to Moscow.

Meanwhile five Brits are heading home after their release was agreed as part of the prisoner swap and they were flown to Saudi Arabia earlier today.

Public broadcaster Suspline said the exchange had happened near the northern Ukrainian city of Chernihiv. 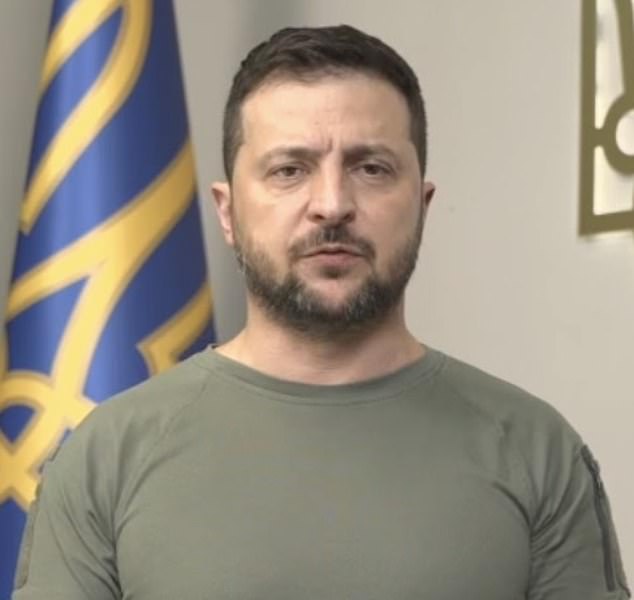 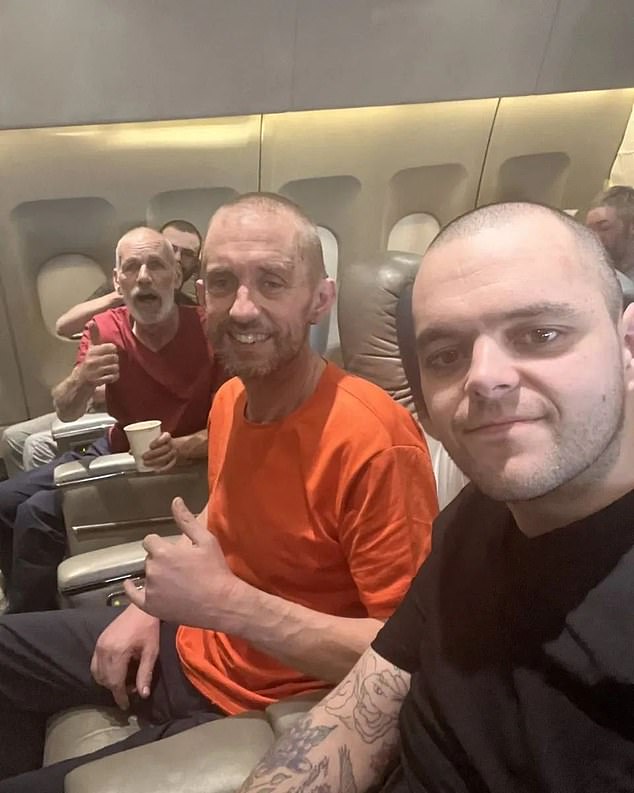 L-R John Harding, Shaun Pinner and Aiden Aslin are released months after being captured in Ukraine

The sister of British prisoner of war Shaun Pinner, who was facing a death sentence at the hands of pro-Russian separatists after being captured in Ukraine, has revealed her relief after he was freed.

Cassandra Pinner says her family, and the relatives of four other British men who were also released, can celebrate after it was confirmed he will be coming back to the UK after being freed from detention today.

The 48-year-old is currently in Saudi Arabian capital of Riyadh after the country intervened to negotiate the release of 10 captured prisoners at the behest of the Crown Prince. Among the others released are two Americans, one Swede, one Croat and one Moroccan.

Speaking to MailOnline, Cassandra said: ‘I am just so relieved that my brother and the others will be home tomorrow.

‘It has been hell for everybody but at last the worrying can stop for us.

‘We must not forget all that is still happening in Ukraine, but for now our families can celebrate that our boys are home!’

Pinner will be flown back to the UK in the near future along with Nottinghamshire man Aiden Aslin and three other Brits who were captured by pro-Moscow separatists.

He and Aslin were captured in June and kept in detention, before a court in the self-proclaimed Donetsk People’s Republic (DPR) handed them both a death sentence.

But the two are now on their way back to the UK, along with three other Brits, as Aslin and Pinner’s families eagerly await their return. 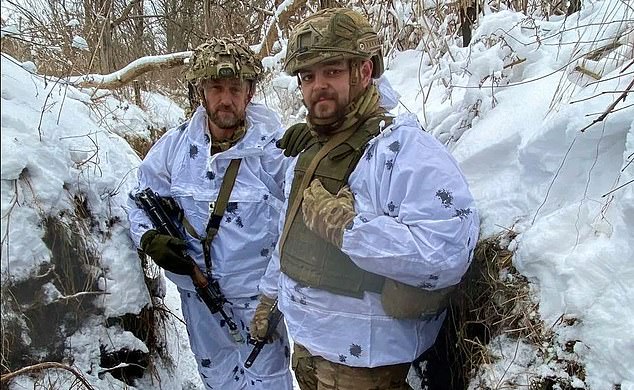 Shaun Pinner (left) and Aiden Aslin (right), who had been serving in the Ukrainian marines, were captured by Putin’s troops in the city of Mariupol in April. The pair have both now been released 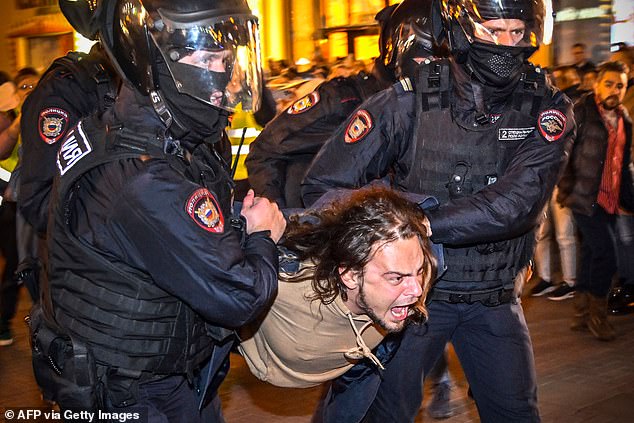 More than 1,000 people have reportedly been arrested today across Russia for protesting against the war

UK Prime Minister Liz Truss said: ‘Hugely welcome news that five British nationals held by Russian-backed proxies in eastern Ukraine are being safely returned, ending months of uncertainty and suffering for them and their families.’

It could not be immediately established if the released group included Morocco-born Brahim Saadoun who was also captured and sentenced to death alongside the Brits in Donetsk.

The prisoner exchange came at a puzzling time, landing on the same day Vladimir Putin ordered the mobilisation of reservists in a dramatic escalation of the war in Ukraine.

Putin also threatened the West with nuclear weapons over Ukraine, after he announced plans to annex occupied parts of its territory to the Russian mainland.

He announced today that around 300,000 army reservists would be called up to the front lines.

It comes after a series of heavy defeats which have forced Russian troops to retreat and regroup.

The UK’s Foreign Secretary James Cleverly said: ‘I welcome the safe return of Ukrainian prisoners of war and one civilian, including five British nationals. Prisoners of war from other countries held by Russia-backed proxies have also been returned.

‘This brings to an end many months of uncertainty and suffering, including the threat of the death penalty, for them and their families, at the hands of Russia.’

Both Ukrainian and Russian forces have captured hundreds of enemy fighters since the start of the conflict, with a handful of prisoner exchanges having taken place.

The head of the UN human rights mission in Ukraine said earlier this month that Russia was not allowing access to prisoners of war, adding the UN had evidence that some had been subjected to torture and ill-treatment that could amount to war crimes.

Russia denies torture or other forms of maltreatment of POWs.

After Putin announced mobilisation, all plane tickets to countries where Russians would not need a visa, including Turkey, Armenia and Georgia, have now sold out, while flagship airline Aeroflot is not displaying any available flights.

More than 100 demonstrators holding ‘no to mobilisation’ signs and chanting anti-war slogans have been dragged away by armed police trying to stamp out the unrest across the country, and a reported 1,000 people have been arrested today alone.

Last month, the head of the Russian-backed separatist administration in the eastern Ukrainian region of Donetsk said a trial of captured Azov personnel would take place by the end of the summer.

The Azov unit, formed in 2014 as a militia to fight Russian-backed separatists, denies being fascist, and Ukraine says it has been reformed from its radical nationalist origins.