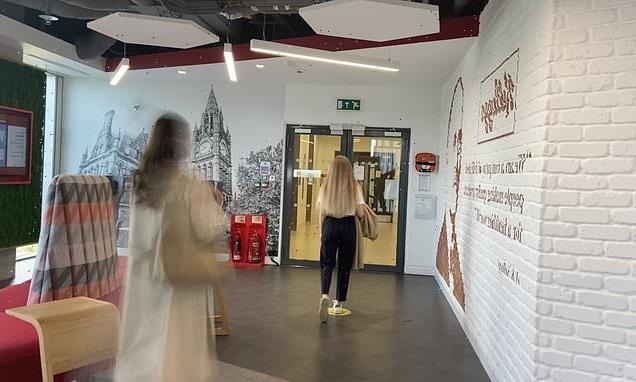 Grrrrrreat! Kellogg’s offers staff every Friday afternoon off in the summer – as long as they’ve completed a full week’s hours

Food giant Kellogg’s is offering employees Friday afternoons off work to give them ‘a break from the screens’ and improve their mental health.

The firm’s summer hours scheme runs from May to September, offering office-based employees the chance to finish work from 12pm on a Friday, or on a weekday of their choice for field sales teams, provided they have completed a full week’s hours.

The company, which has over 400 employees, also introduced meeting-free Friday afternoons last year, which it says has encouraged a culture of flexibility.

This year, Kellogg’s hired an occupational health and wellbeing lead, Julie Davies, to provide independent and confidential advice to colleagues and managers on their mental and physical health.

The Kellogg’s summer hours scheme comes as 60 UK companies are about to trial a four-day working week from June with campaigners saying the move will create a better work-life balance and boost productivity.

But critics warn it will lead to more stress as employees attempt to squeeze more work into fewer hours, and leave firms with higher costs.

Ms Davies has implemented a ‘network of mental health champions’, with employees offered the opportunity to put themselves forward for in-house training that would help them support peers who may be ‘struggling’.

Although, there is a catch – the 12pm Friday finish only applies to those who are office based, provided they have completed a full week’s hours. Those on the business’ field sales teams can pick a weekday of their choice. 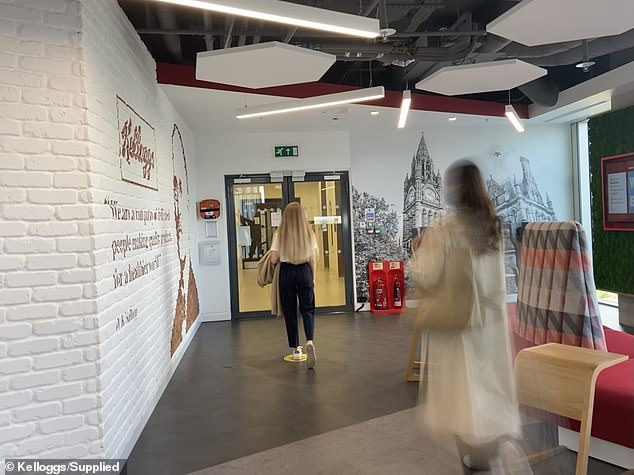 Food giant Kellogg’s is offering employees Friday afternoons off work to give them ‘a break from the screens’ – but only applies to office-based staff and those who completed the full week’s hours. The head office for Kellogg’s in Salford, Manchester, pictured

Kellogg’s UK employs more than 400 employees at its office in Salford and has a further 50 employees in its field sales team.

The scheme, which originally launched 19 years ago, is part of a wider package from Kellogg’s aimed at supporting employees’ mental and physical wellbeing.

Staff are offered in-house training to be able to support colleagues who may be struggling.

Chris Silcock, head of Kellogg’s UK, said: ‘We have a long history of offering flexible working and summer hours is a great way to encourage our people to take time away from their desks.

A survey, from recruitment company Hays, revealed that half of workers would be tempted to quit and move to a rival company for a four-day work week, with the majority predicting it would boost their mental health and wellbeing.

Hays said a survey of more than 9,600 workers showed that two in five believe a four-day week will become a reality in the next few years.

And around 53 per cent of respondents said they would consider moving to a different employer if a four-day week was offered.

Gaelle Blake, of Hays, said: ‘We’re seeing companies getting more creative in what they can offer prospective staff when trying to recruit in a competitive market.

‘However, if employers don’t get the basics right such as offering competitive salaries along with flexible and hybrid working, the majority of professionals will look elsewhere to employers who have got the fundamentals right.

‘From our experience, there’s still only a handful of companies offering a four-day week for example, and while this is an attractive offering, there are lots of other ways for companies to stand out.

‘Actions such as having a strong purpose and offering staff the opportunity to take volunteer days is attractive, as is introducing wellbeing days.’

Around 60 companies will take part in a four-day week trial next month organised by a group of academics at Oxford, Cambridge and Boston College in the US, who are to run the test run from June to December, with a range of businesses and charities taking part.

They include the Royal Society of Biology, hipster London brewery Pressure Drop, a Manchester medical devices firm, and a fish and chip shop in Norfolk.

The trial, led by 4 Day Week Global, will see staff members from different organisations completing the usual amount of work, and up to 35 hours each week, but split over four days rather than five.

In Japan, companies are increasingly switching to four-day weeks to help improve the work-life balance for their employees.

Major Japanese conglomerate Panasonic became the latest company to offer staff he option of taking a third weekend day off.

In August 2019, Microsoft Japan implemented a four-day week giving their 2,300 employees five Fridays off in a row.

The company said productivity jumped 40 per cent, meetings were more efficient, and workers – who were also happier – took less time off.

Nine out of ten employees at the company said they preferred the shorter working week and other benefits, including a 23 per cent reduction in weekly electricity use, and a 59 per cent decrease in the number of pages printed by employees, which were also welcomed by employers.