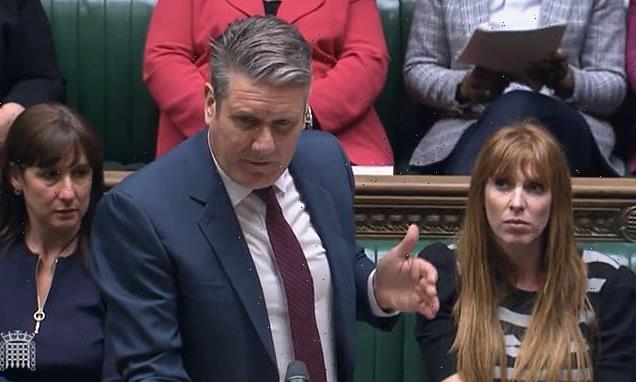 ‘John would have given the world to hold his dying wife’s hand’: Keir Starmer blasts ‘nodding dog’ Michael Fabricant as he ‘smirks’ while Labour leader reads out letter from ‘widower John Robinson’ who ‘obeyed the rules while the PM partied’

Sir Keir Starmer today called on Boris Johnson to resign following his ‘half-hearted’ apology and read out a letter from ‘widower John Robinson’ who, despite his wife dying in hospital, ‘obeyed the rules while the PM partied’.

The Labour leader said he spoke to Mr Robinson, a constituent of Conservative MP Michael Fabricant (Lichfield), about how he and his family could not spend time with his wife before she died and had to limit numbers at her funeral.

Mr Robinson previously called the Prime Minister a ‘pathetic excuse for a man’ and that he would ‘never forgive’ him for breaking his own rules.

Speaking in the Commons today, Sir Keir said: ‘Doesn’t the Prime Minister realise that John would have given the world to hold his dying wife’s hand even if it was just for nine minutes, but he didn’t because he followed the Prime Minister’s rules, rules we now know the Prime Minister blithely, repeatedly and deliberately ignored.

‘After months of insulting excuses, today’s half-hearted apology will never be enough for John Robinson.

‘If the Prime Minister had any respect for John and the millions like him who sacrificed everything to follow the rules, he’d resign, but he won’t because he doesn’t respect John, he doesn’t respect the sacrifice of the British public, he’s a man without shame.’ 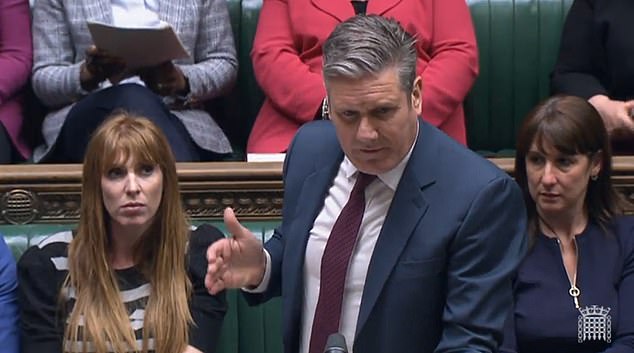 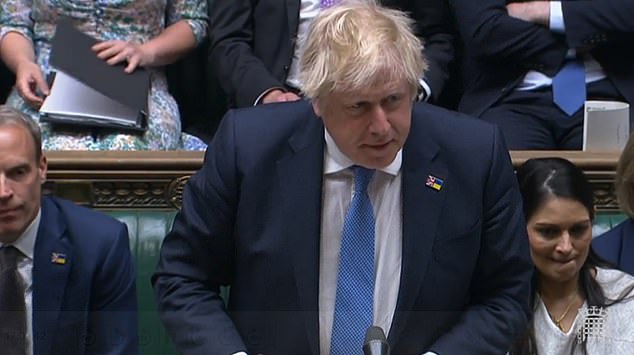 In a letter to the Guardian, submitted last week, Mr Robinson wrote that their two daughters and three grandchildren had to carry notes from the funeral director when they travelled 100 miles up the motorway ‘in case they were questioned by the police’.

He also said their son in law had to remain at home for the funeral as only six mourners were allowed to gather.

‘Johnson flouted his own laws and rules’, he wrote. ‘He partied his way through them.

‘Am I angry? Anger doesn’t even touch the sides of how I feel about this pathetic excuse for a man, and I suspect that the majority of us little people share my views, will never forget and will never forgive.’

‘Let me begin in all humility by saying that on the 12th of April I received a fixed penalty notice relating to an event in Downing Street on 19th of June 2020.

‘I paid the fine immediately and I offered the British people a full apology, and I take this opportunity, on the first available sitting day, to repeat my wholehearted apology to the House.

‘As soon as I received the notice, I acknowledged the hurt and the anger, and I said that people had a right to expect better of their Prime Minister, and I repeat that again in the House now.

‘Let me also say – not by way of mitigation or excuse but purely because it explains my previous words in this House – that it did not occur to me, then or subsequently, that a gathering in the Cabinet Room just before a vital meeting on Covid strategy could amount to a breach of the rules.

‘I repeat: that was my mistake and I apologise for it unreservedly.

‘I respect the outcome of the police investigation, which is still underway, and I can only say that I will respect their decision-making and always take the appropriate steps, and as the House will know, I have already taken significant steps to change the way things work in No10.

‘And it is precisely because I know that so many people are angry and disappointed, that I feel an even greater sense of obligation to deliver on the priorities of the British people, and to respond in the best traditions of our country to Putin’s barbaric onslaught against Ukraine.’

Boris Johnson earlier offered MPs a brief apology for his Partygate lawbreaking – before attempting to drag attention back to the war in Ukraine.

The Prime Minister said sorry with ‘full humility’ over the £50 fixed-penalty notice he received from Scotland Yard last week, but in the same breath he claimed ignorance of his own Covid rules, saying: ‘It did not occur to me then or subsequently that a gathering in the Cabinet Room just before a vital meeting on Covid strategy could amount to a breach of the rules.’

Sir Keir told the Commons to look past Mr Fabricant – ‘the member for Lichfield’ – and ‘the nodding dogs in the Cabinet’, adding: ‘There are many decent honourable members on the benches opposite who do respect John Robinson, who do respect the British public.

‘They know the damage the Prime Minister is doing, they know things can’t go on as they are, and they know it’s their responsibility to bring an end to this shameful chapter.

‘Today I urge them once again don’t follow in the slipstream of an out-of-touch, out-of-control Prime Minister.

‘Bring decency, honesty, and integrity back into our politics and stop the denigration of everything that this country stands for.’

Boris Johnson, replying to Sir Keir Starmer, said: ‘I apologise once again profusely to John Robinson, to all those who lost loved ones, particularly those who suffered during the pandemic.

‘In my statement I’ve tried to explain why I spoke to the House as I did.

‘[Sir Keir] has chosen to respond with a series of personal attacks on me and I understand why he does that, but I think it would have been a good thing in the course of remarks if he had addressed some of the issues that I mentioned, not least the crisis in Ukraine, with the impact that is having on the livelihoods of everybody in this country.’

Mr Johnson said the Government will ‘get on with our job’.

He added: ‘When he talks about nodding dogs, I’d remind the House there was a certain nodding dog who sat nodding in the previous Labour shadow cabinet that would have happily installed (Jeremy Corbyn), and made, I think, a disastrous mistake in the security of our country at a very difficult time.’

Also today, Sir Lindsay Hoyle approved a Labour plan for a debate and vote on Thursday over the PM’s claim from the despatch box last year that all lockdown rules were followed in Downing Street.

MPs will get to vote on a motion to be tabled by Keir Starmer referring him to the Commons Privilege’s Committee over whether he deliberately misled MPs.

The committee has the power to summon reports and documents. It means that MPs could request to see the full version of senior civil servant Sue Gray’s inquiry into the Downing Street lockdown gatherings and any potential photographic evidence that exists.

While the Conservatives’ 80-strong majority means that the Government will almost certainly win the vote and block the investigation, it keeps the row in the headlines at a time when the PM wants it buried by other issues.