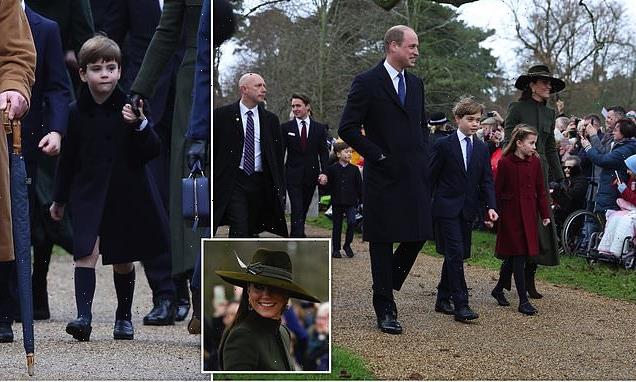 The chic midwinter: Stylish Kate strolls with George, Charlotte and Louis and husband William from Sandringham church during King’s first Christmas walkabout ahead of his debut speech to the nation at 3PM

The Princess of Wales dazzled this morning as she lead her children and husband William from Sandringham church during the King’s first Christmas walkabout.

Kate was seen guiding George, Charlotte and Louis as they joined the rest of the Royal Family when leaving the traditional Christmas Day church service on the Norfolk estate.

King Charles III was seen walking with Zara and Mike Tindall as the Royal Family attended its traditional Christmas Day church service at Sandringham this morning.

The monarch was spotted chatting with his niece and nephew-in-law as they left the service hours before his first festive speech to the nation will be broadcast.

The Royal Family then went on a Christmas walk on the estate, with royal fans who gathered outside the gates delighted to see almost the entire family.

Charles was joined by Camilla, the Queen Consort, at the head of the group, while the Waleses walked just behind them.

It marks the first Christmas since Queen Elizabeth II died in September, and should prove to be a poignant  occasion for the family and supporters of the Royals.

Royal fans gathered outside the gates at the Norfolk estate to pass on their sympathies and well wishes, with some camping out overnight to get a spot. 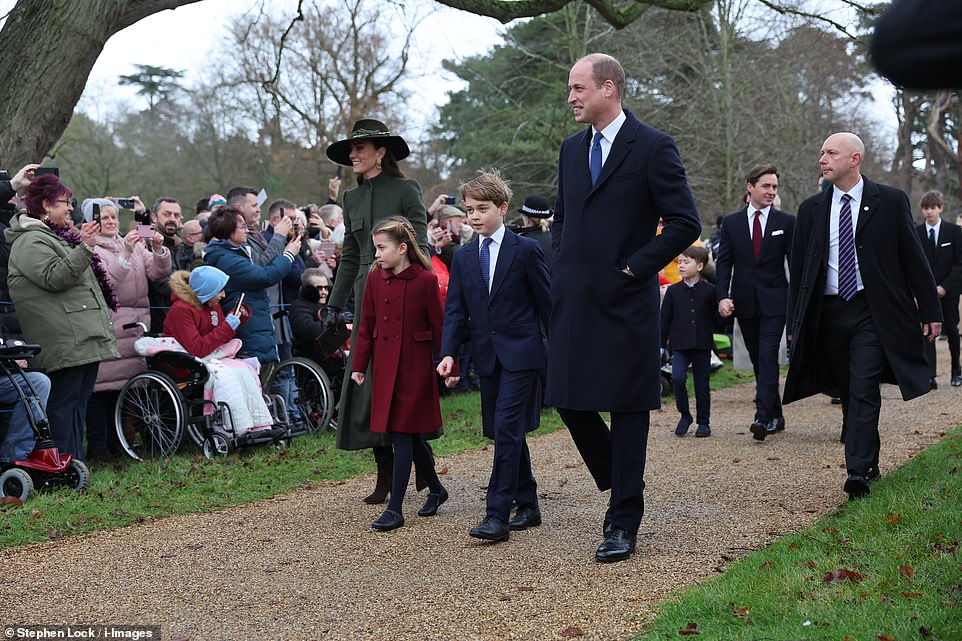 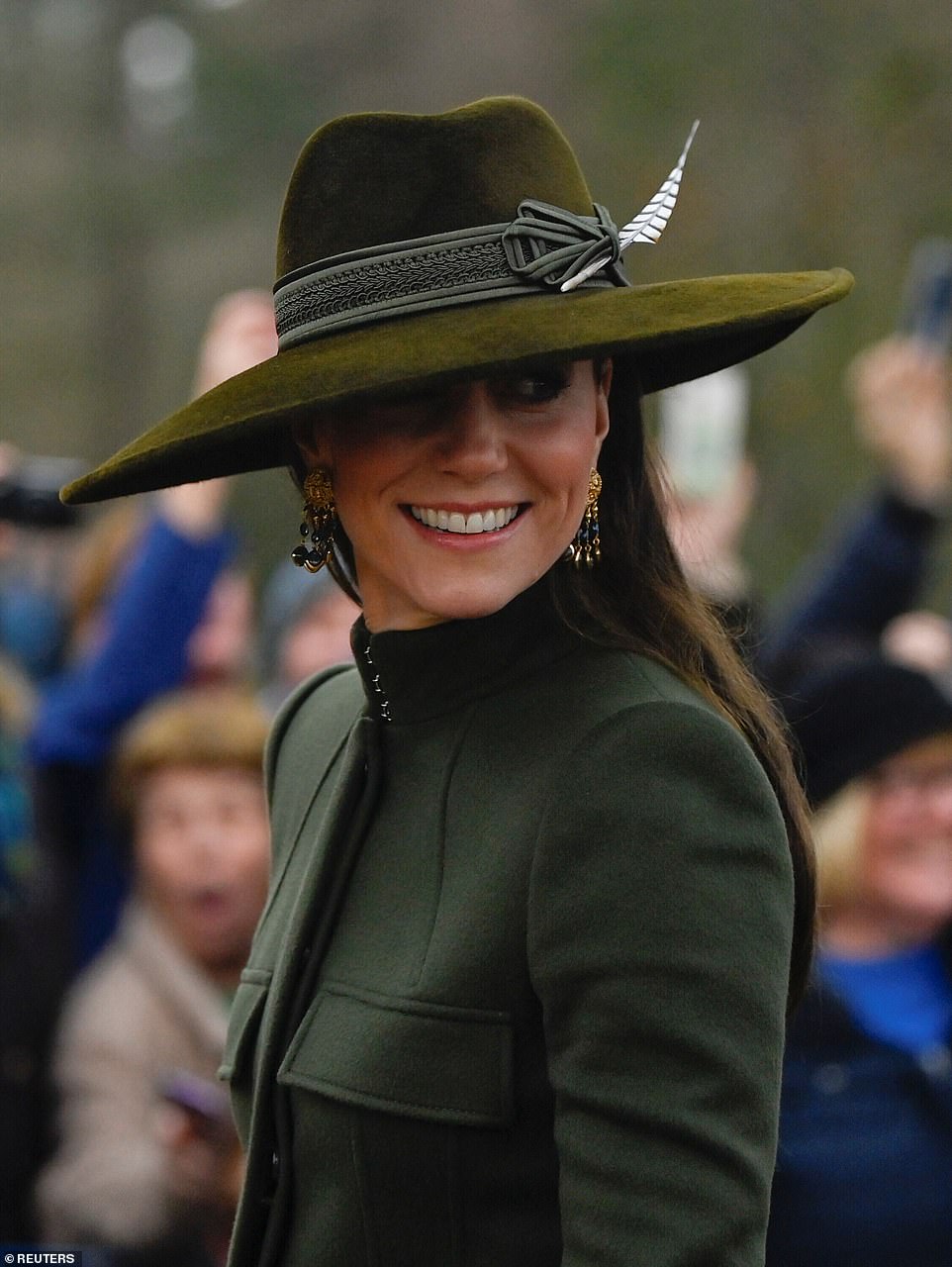 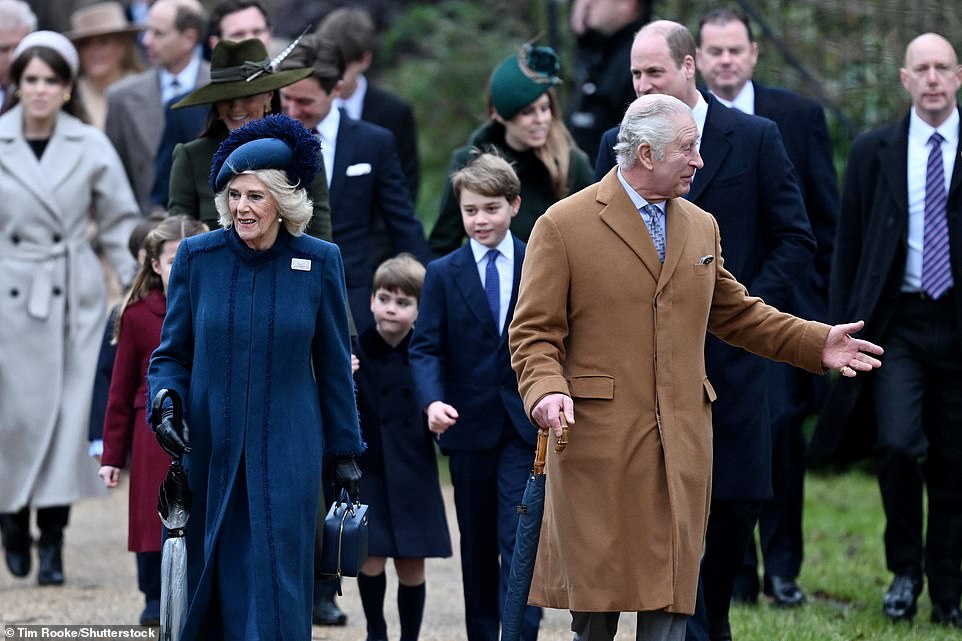 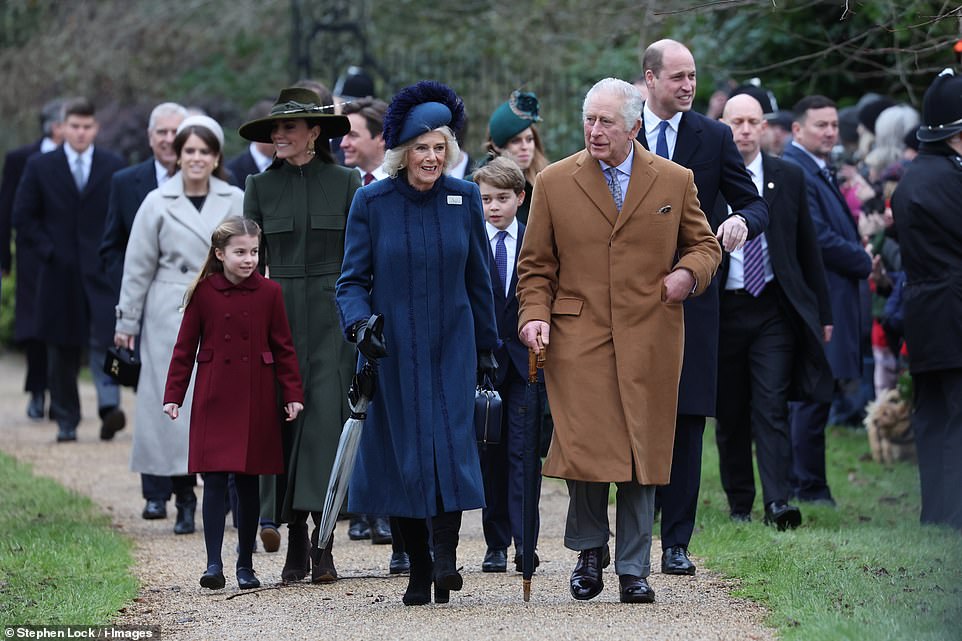 King Charles and Camilla, the Queen Consort, lead the group into the church 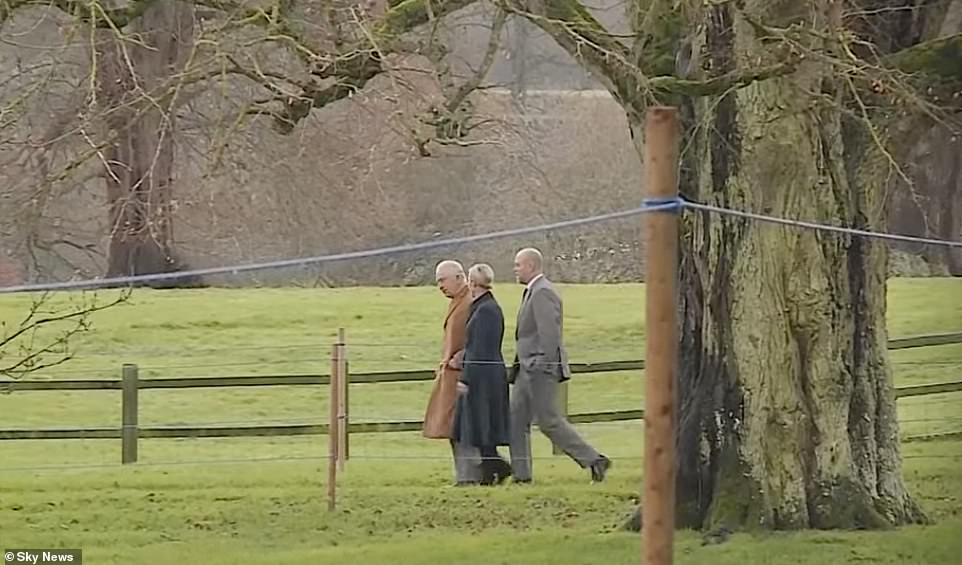 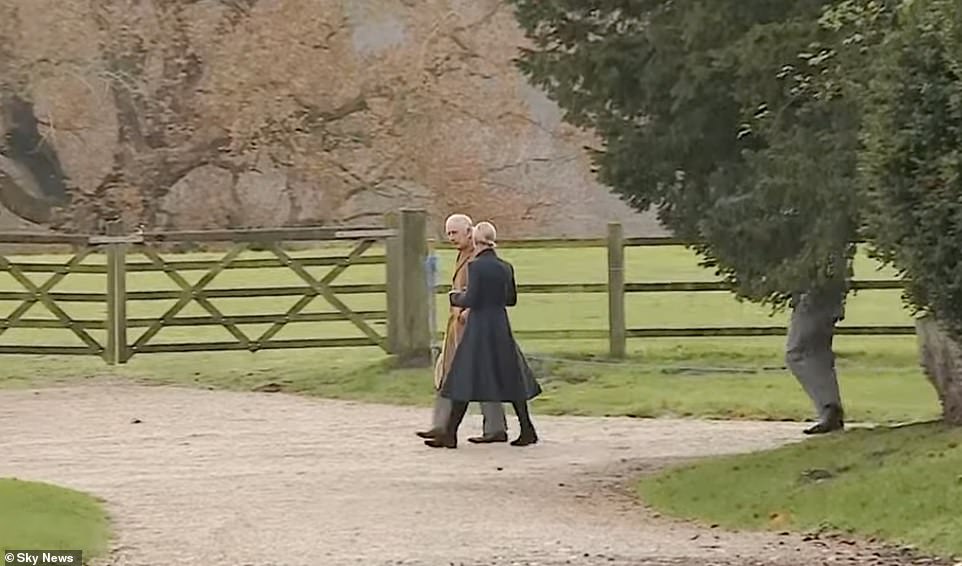 The monarch talks with his niece, Zara Tindall, as they stroll in the grounds of Sandringham estate on Christmas morning

His Majesty has taken control of affairs in his mother’s absence the family gather for Christmas dinner at Sandringham.

There will be no place for Prince Harry and Meghan Markle though, with the Duke and Duchess of Sussex staying in the United States for Christmas after the release of their bombshell Netflix series.

One royal biographer has said that the series might bring the Firm closer together, with Charles wanting to make his mark by emphasising ‘tolerance and family harmony’.

‘Charles has invited the Duchess of York for the first time since her divorce from Prince Andrew,’ Sally Bedell Smith said.

‘The Duke of Edinburgh had been the main obstacle to Fergie’s inclusion, and the Queen had arranged for Fergie to stay nearby Wood Farm so she could see her daughters Beartrice and Eugenie after the celebrations at Sandringham.’

In the afternoon millions of people in the UK will tune in to watch Charles deliver his first Christmas Day message to the nation.

He is expected to pass on his sympathies to people struggling with the cost-of-living crisis and praise those charities and faith groups helping those in need.

The speech was filmed at St George’s Chapel in Windsor Castle earlier this month by the BBC, and is also expected to feature a poignant tribute from Charles to his late mother.

A queue of well wishers formed at Sandringham in Norfolk early in the morning ahead of the royal family’s traditional Christmas Day church service. 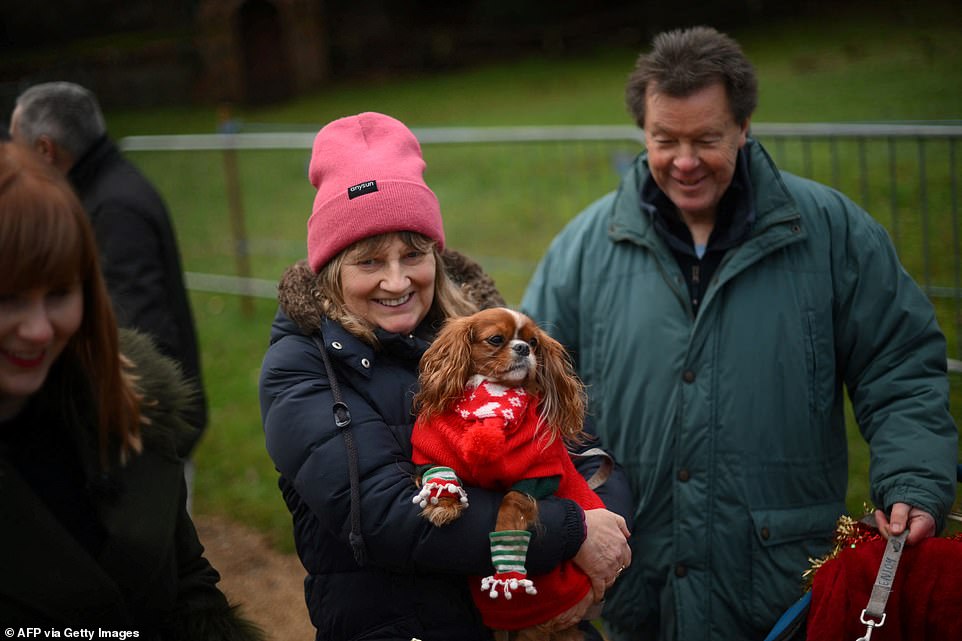 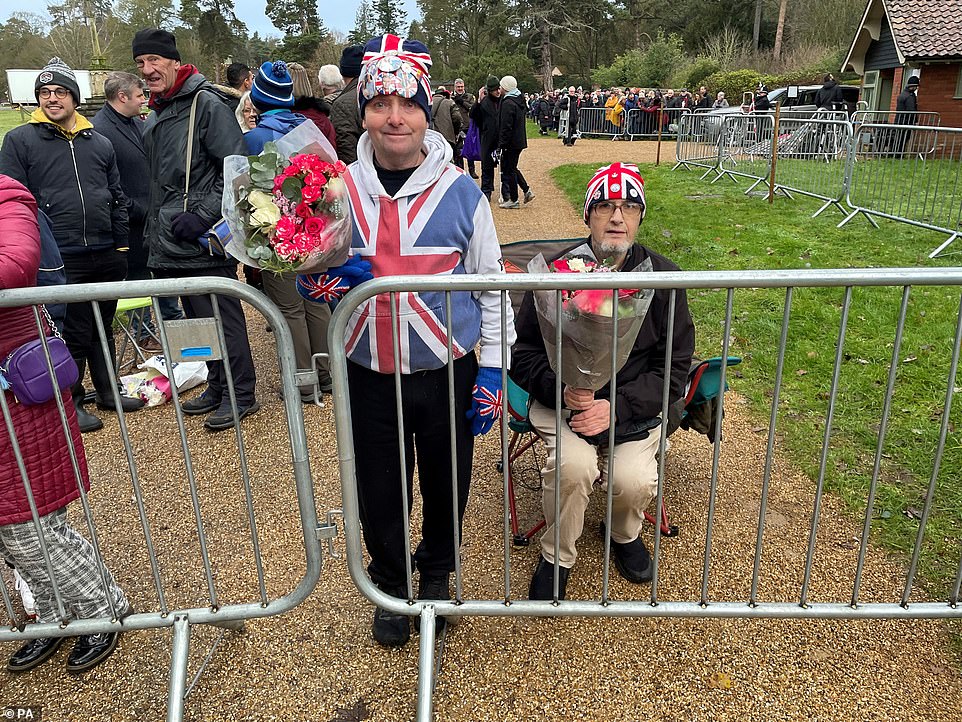 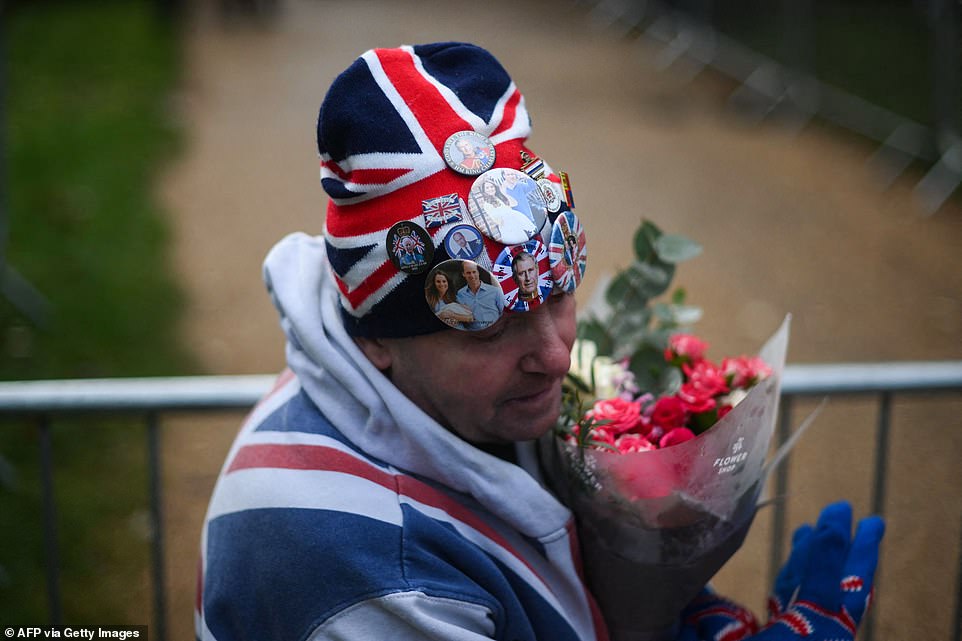 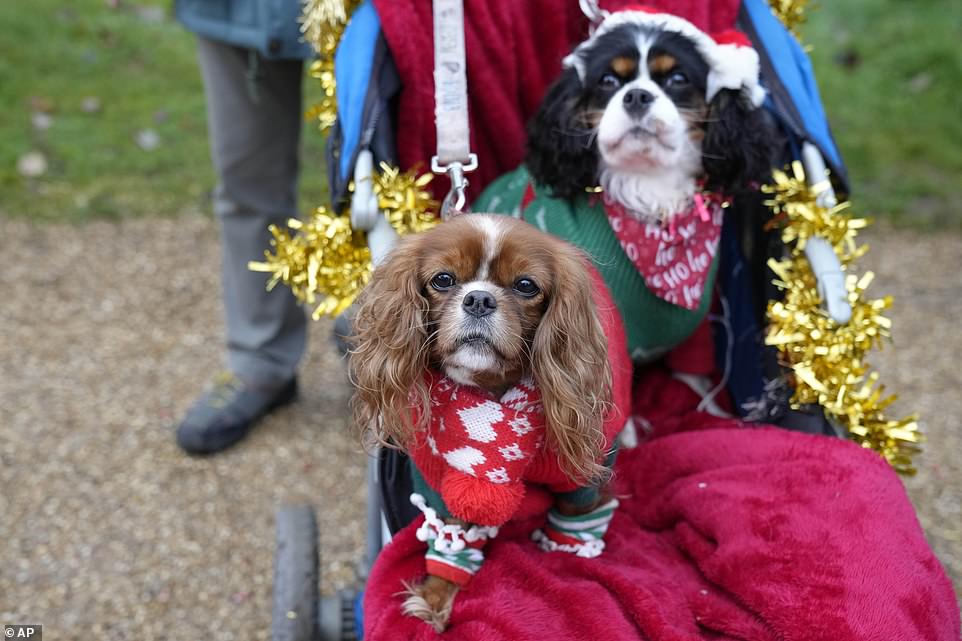 At the front of the queue was John Loughrey, of Streatham, south London, who said he arrived at 7pm on Christmas Eve and camped out overnight with his friend Sky London, 62.

Retired assistant chef Mr Loughrey said they took a train from London to King’s Lynn in Norfolk, then a bus to Sandringham where they are staying at a local hotel, around 15 minutes’ walk from St Mary Magdalene church.

The 67-year-old, who wore a Union Jack hat, gloves and hoody, said he slept in a tinfoil blanket to ensure a place at the front of the queue.

‘We were both shivering,’ he said. ‘I couldn’t sleep properly.’

He has brought a bouquet of roses that he hopes to give to the royals.

Mr Loughrey said: ‘We wanted to come here to show our appreciation to King Charles III and his Queen Consort and of course the Prince of Wales.

‘Because of losing the Queen, it’s a sad time for the family and I’m sure they will mention the Queen in the church today.

‘It will be in King Charles’s thoughts about his mother, about her legacy, they will be thinking about it over Christmas.

The King and Queen Consort will stay at Sandringham longer than they had in past – in previous years Camilla has left a few days after Christmas to see her family in Wiltshire.

This time however, they will stay slightly longer, but still not as long as the late Queen used to – she would always stay until after February 6, which is the anniversary of her succession.

Instead, the King and Queen will leave some time after the new year to go to Birkhall in Scotland, where Charles has always spent weeks during the festive period.