What happens next? As we crawl out from under the doona, where to from here? 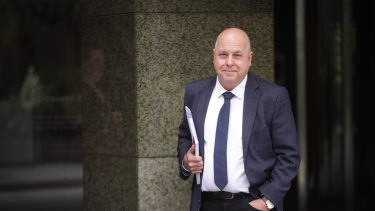 Expect Tim Pallas to throw caution to the wind and go big on job creation on signature projects, the sort that make you sit up and go “wow”.Credit:Simon Schluter

So much is unknown about the post-COVID-19 landscape. Despite the heartfelt emotional and sometimes confronting pleas for individual businesses or special interests to be given preference, the guidelines must continue to be informed by science, not economics. It is common ground that none of us wants to go back into a Europe-style next wave. A third lockdown would trigger COVID-19 fatigue, test communal forbearance and certainly spell the end for the Andrews government.

The Treasurer, framing the overdue state budget, is frantically keeping banks reassured that Victoria will one day be able to repay the money he is borrowing. Expect Tim Pallas to throw caution to the wind and go big on job creation on signature projects, the sort that make you sit up and go “wow”.

Meanwhile, the state government has a few time bombs ticking. None is more dangerous than the now-delayed report from former judge Jenny Coate, who has been scrutinising what went wrong with hotel quarantine.

Counsel Assisting Tony Neal, QC, has had to do some embarrassing gap-filling in the evidentiary trail. Chief Health Officer Brett Sutton and others are among those struggling to explain if they misled the inquiry about the extent of their knowledge of the use of security guards.

Is “too many emails – I couldn’t read them all” an excuse that will wash? Probably not, given the tragic toll from that failure. Is it a hanging offence, or one that goes into the “terrible but make sure it does not happen again” category? You be the judge.

Former royal commissioner Coate will also be searching for answers about other aspects of the hotel quarantine misadventure. At the time, bureaucrats and their political masters were scrambling to secure supplies of scarce PPE, safeguard emergency departments from being overwhelmed, keep at least some parts of the economy ticking over and finding ways to get Victorians to learn new sanitation rules. And to stop hoarding toilet paper.

Hotel quarantine was a small and relatively unimportant part of the overall COVID-19 response. Travellers were to be tucked away, fed and watered in mostly luxury hotels, and the Crisis Cabinet then turned its attention from a sideshow to the main game. There was no template, no procedure manual, no prior experience. And it all went pear-shaped.

The delay in Coate finalising her analysis is inconvenient for Andrews. Whether by accident or design, she was due to hand her report to the government straight after the US election. “Take out the trash” is the political tactic used to dump smelly investigations while everyone is distracted. Blanket coverage of Trump v Biden would have starved the hotel quarantine report of oxygen. Fortuitously for a curious Victorian public and a reinvigorated opposition, the delay means that clash is avoided.

The other big “lawyer job creation scheme” in Melbourne in recent times is also soon to provide a final report. Margaret McMurdo is now writing her findings about Victoria Police's use of double agent Nicola Gobbo, who somewhat hilariously was removed from the Bar Roll only this week.

McMurdo will surely make findings consistent with the damning decision of the High Court, arrived at after endless pointless litigation by a Victoria Police trying desperately to keep the entire sordid affair secret. Her findings must go beyond “this must never happen again”, but whether there is an appetite for even more litigation, reinvestigation and prosecution remains to be seen.

There are some interesting parallels between the two inquiries, particularly the role of lawyers being used to wave their magic wands over scandals in an attempt to sanitise them.

We also saw the same magic-wand approach with embattled Assistant Treasurer Michael Sukkar this week. The federal government hired the very same law firm that Sukkar used to work for to investigate its own former colleague over serious allegations published in this paper. The investigation interviewed no additional witnesses. Not surprisingly, it found insufficient evidence to confirm the claims against Sukkar.

It is no more than trickery to wave the sanitising wand of a pretend legal inquiry over a scandal and declare the accused to be cleared. How could Ashurst, the law firm involved, even take on the job, given at the very least a perception of conflict of interest? Apparently they themselves decided there was no problem with taking a lucrative government referral.

Jon Faine is a former broadcaster on ABC 774.