Just POTTY! Police go soft on thousands of dope smokers at Hyde Park… but crack down on sunburn at the cannabis event amid soaring temperatures in London

Police voiced their concerns as thousands of people openly smoked cannabis yesterday – but they were only worried about the drug-users getting sunburnt in the heatwave.

In an extraordinary scene at London’s Hyde Park, officers did nothing while a crowd estimated at more than 5,000 gathered to campaign for the legalisation of the Class B drug.

Police signs proclaiming ‘Cannabis is illegal’ and ‘Anyone found in possession of drugs faces arrest and prosecution’ were entirely disregarded. 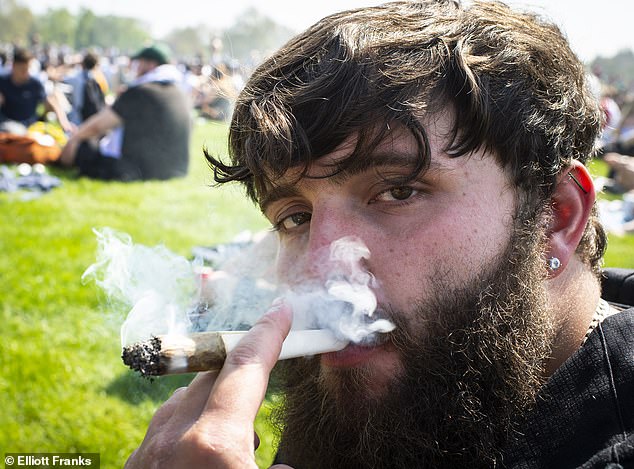 Even though the law says anyone found in possession of the drug can be jailed for up to five years, and if found guilty of dealing for 14 years, officers said it was a good opportunity to have ‘a chat and a laugh’ with drugs users puffing on joints.

One sergeant told our reporter: ‘We are not like the French police going in hard. I am more concerned for their health because there are a lot of pasty white people out here today.

‘They are going to get sunburnt. They get stoned and they will forget about the sun and before they know it, they could get sunstroke.’

He added: ‘It might be different if people are dealing. But I have seen no evidence of that.’

A Met Police spokesman confirmed there were no arrests. 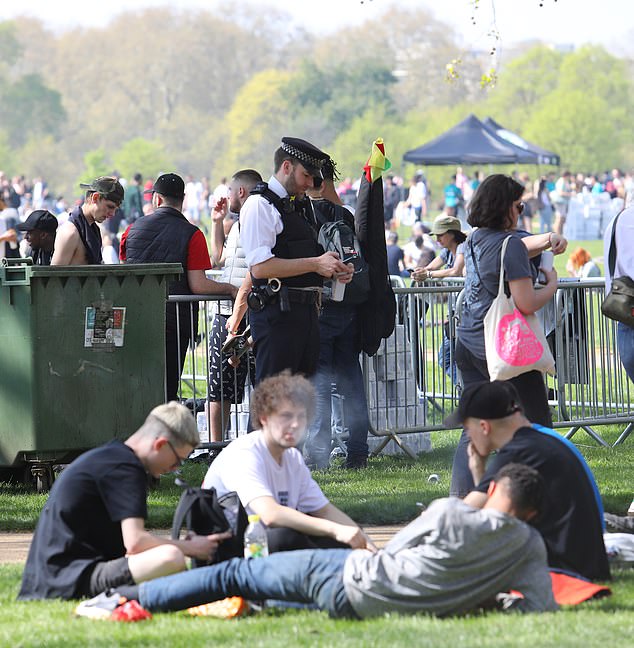 Brazen: A group smoke as police officers stand feet away in London. A Met Police spokesman confirmed no arrests were made

The gathering in London was one of a number of events across Britain, part of an international pro-cannabis day known as ‘4-20’ – American code for the drug, and also US style for yesterday’s date.

In Leeds’ own Hyde Park the smell of cannabis wafted through the 3,000-strong crowd at what was labelled a ‘pirate pop-up event’ – but there were no police in sight.

In Durham people smoked cannabis from glass pipes at an event billed as helping to ‘educate’ people about the benefits of medicinal cannabis and full legalisation.

Marijuana plants and illegal ‘hash cakes’ were also on sale at Durham 420, held in the grounds of Bowburn Hall Hotel, an upmarket venue more used to hosting weddings and conferences.

Despite the event being prominently advertised, not a single police officer turned up.

In Doncaster, only half a dozen people attended the 4-20 event of the town’s cannabis club.

An organiser calling himself Dank, 27, said: ‘South Yorkshire Police are the toughest force out there.

They are not willing to work with any organisation like ours. They are very anti-weed and can get quite aggressive over it.’