Due to arrive… later with Jools Holland: Musician reveals incredible 100ft model railway in attic after epic 10-year project to build London of his childhood

Jools Holland has revealed his rather original way of unwinding: working on a 100ft model railway in his attic that took 10 years to build and includes replicas of the Channel Tunnel and the streetscape of 1960s London.

The pianist said he finds tinkering with the set in the attic of his Kent mansion the perfect way to escape the chaos of everyday life – and particularly values the room’s lack of a mobile signal.

After any work on the track is finished the 60-year-old pours a glass of wine, puts on some music and sits back in a comfortable chair as he watches the trains chug around the rails. 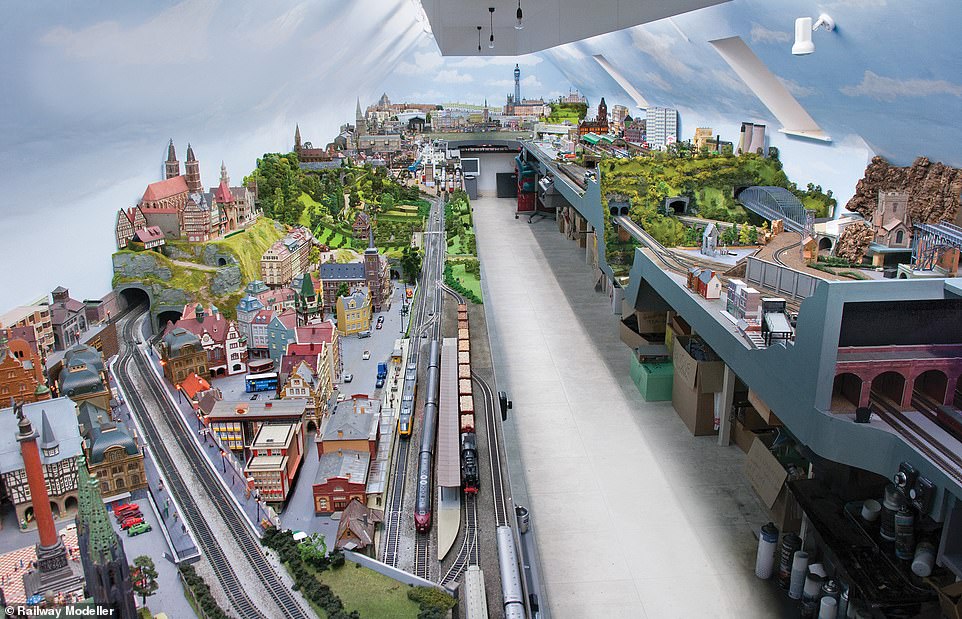 Jools Holland has revealed an astonishing model train set he has spent 10 years building in his Kent attic. It shows a variety of buildings, both real and imaginary, and street scenes from London and Continental Europe. Buildings clearly visible in this photo include the BT Tower (far wall) and Greenwich Observatory (next to it on the right) 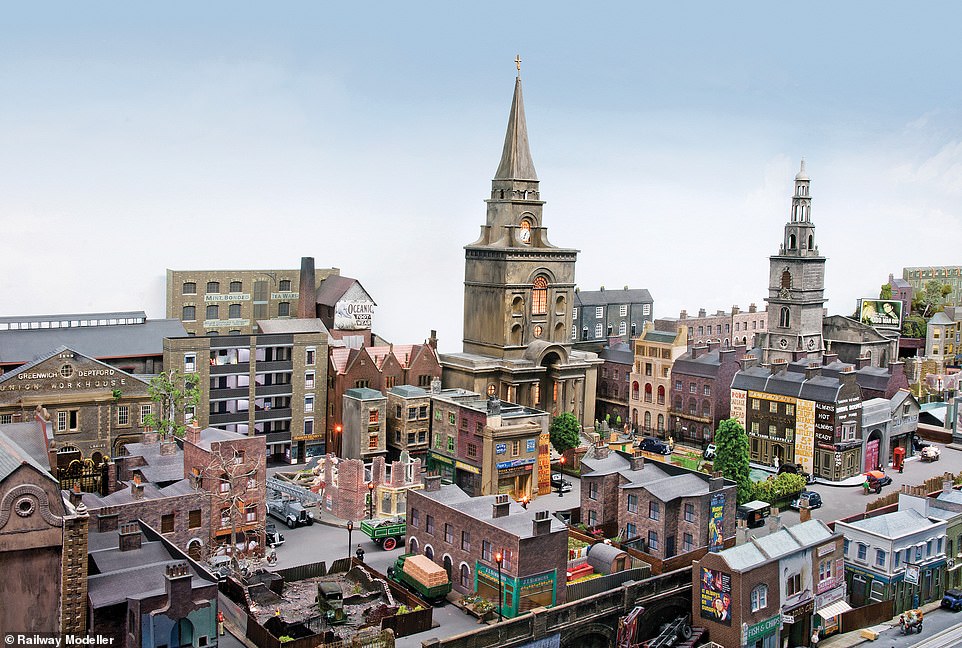 After any work on the track is finished the 60-year-old pours a glass of wine, puts on some music and sits back in a comfortable chair as he watches the trains move around. This image shows a street street scene from 1960s Greenwich, where Holland grew up. Included here is the Greenwich and Deptford Union Workhouse (left) and several churches 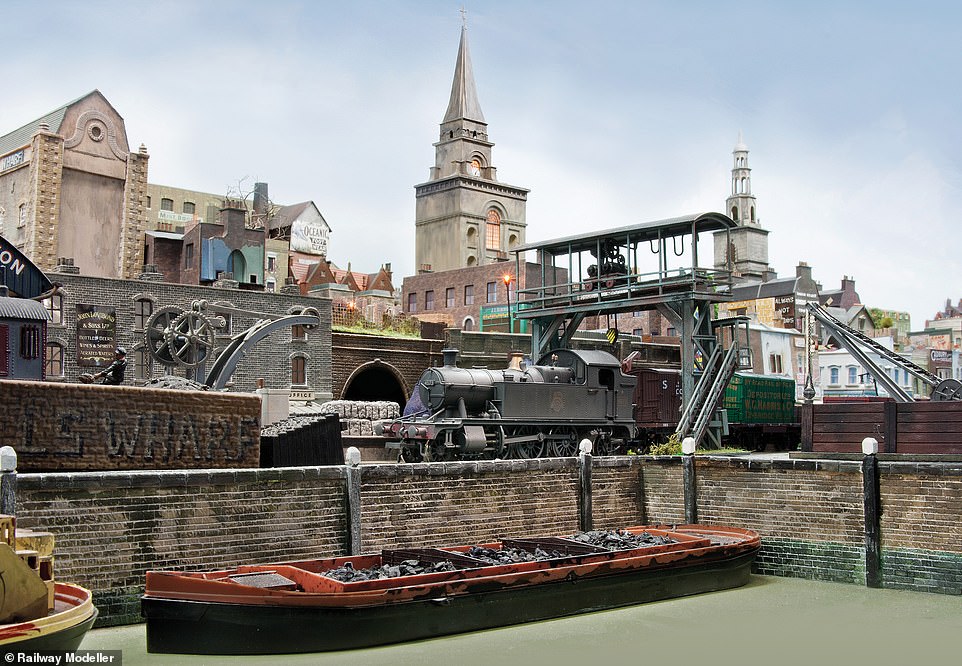 Holland doesn’t miss any details – with canal boats seen floating in this depiction of the London Docklands as an old steam train chugs past. On the quayside are several warehouses and two churches in a style similar to Wren, including one with a three-tiered spire 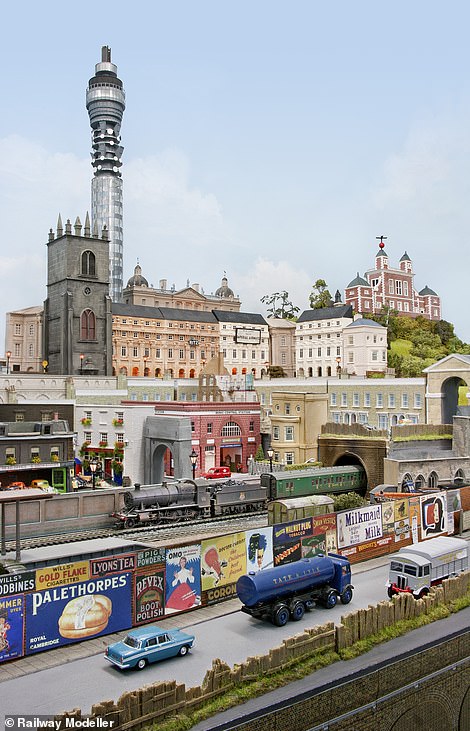 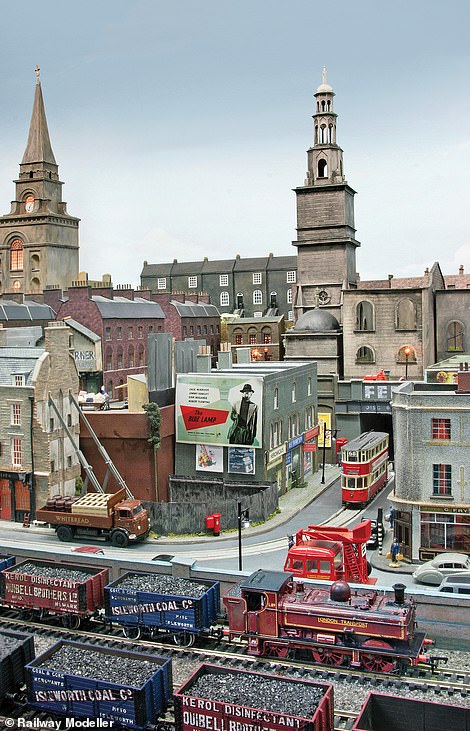 Britain new and old: The BT Tower in Fitzrovia  next to the Greenwich Observatory (left) and a London street scene from the 1960s. (right) The mix of different buildings makes it hard to identify the area that is pictured 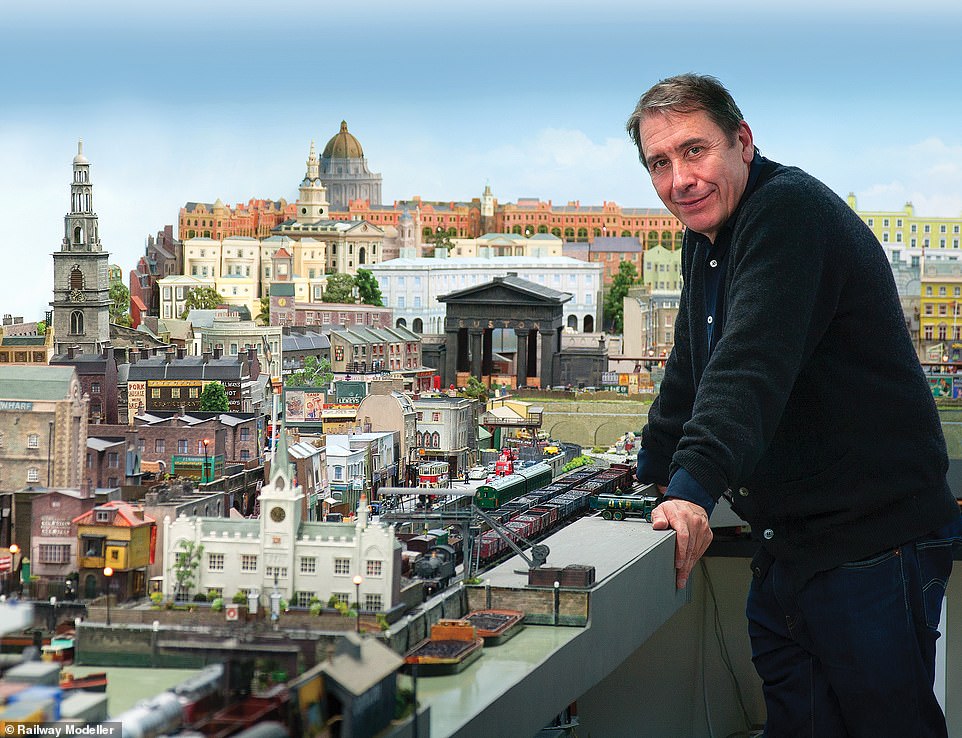 Holland, seen standing over his model set, is not the first celebrity to take an interest in the activity. Rod Stewart has also spoken passionately about the hobby. Pictured in the centre of this image is the Euston Arch, and further down from it is Trinity Hospital, Greenwich (the white building) 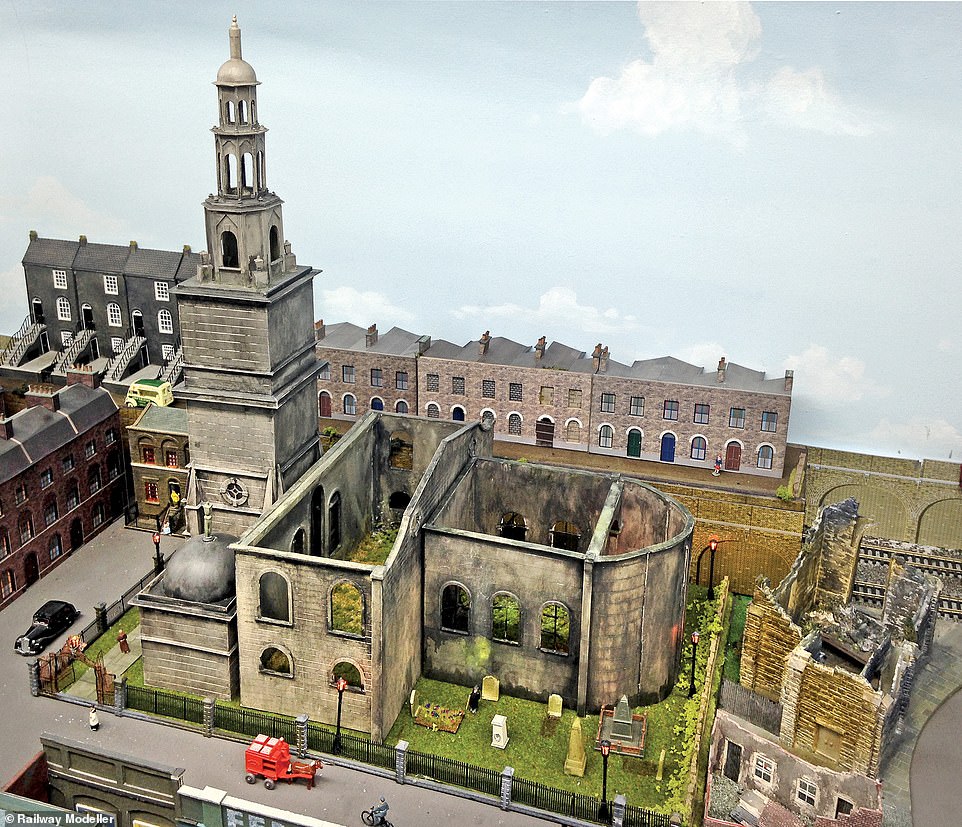 The shell of a London church damaged during the Blitz next to another ruined building in Holland’s set. It is unclear which church is depicted here

Holland’s track is featured on the front page of Railway Modeller magazine, which hits the shops today.

He initially started the set to reflect the south-east London community of Greenwich where he grew up, before expanding to include Berlin and parts of the Continent.

‘The layout begins with 25’ of Europe… then beyond a compressed English Channel/River Thames we reach a tatty post-war London with its docks, pubs and bomb sites.

‘Each 10’ or so the scenes move chronologically along through the decades from the 1950s to the present.

‘This gave me the great excuse to enjoy creating architectural capriccios, a working motorway network, underground rail connections and much more.’ 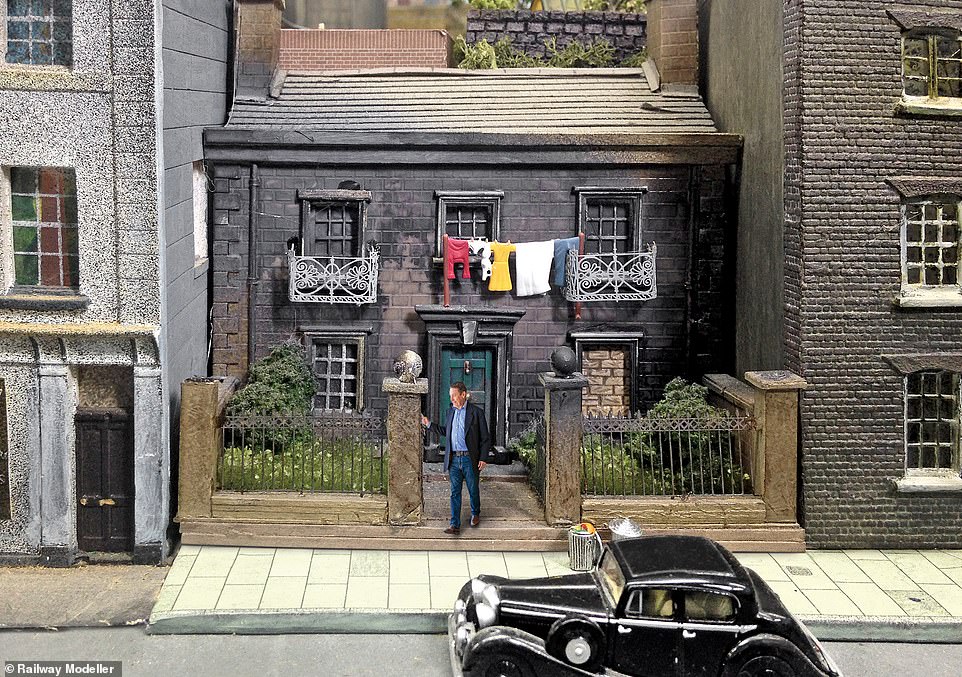 An older house contained in the set, complete with a vintage car parked outside. What appears to be a mini Jules Holland is seen walking out of the front gate in an unidentified area of London 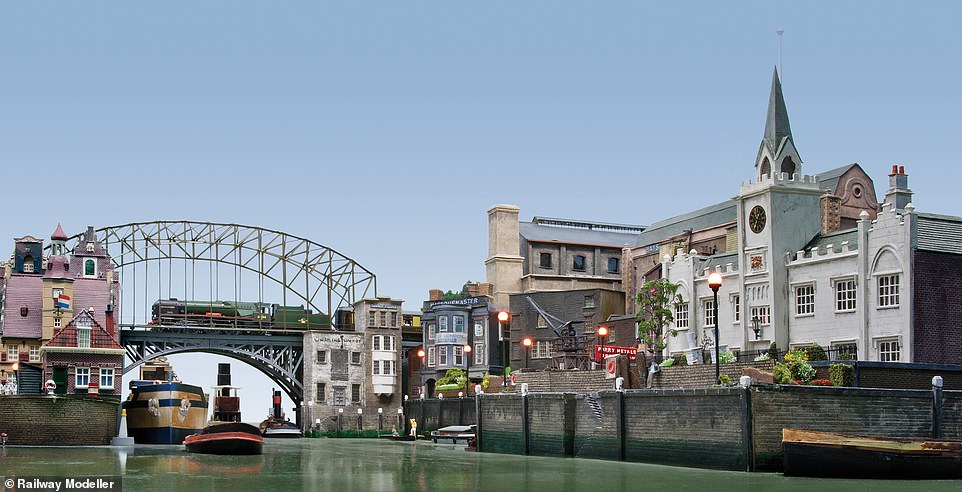 Holland’s set also goes overseas, as shown by this impressively detailed model of a Dutch sea port with ships and barges preparing to dock 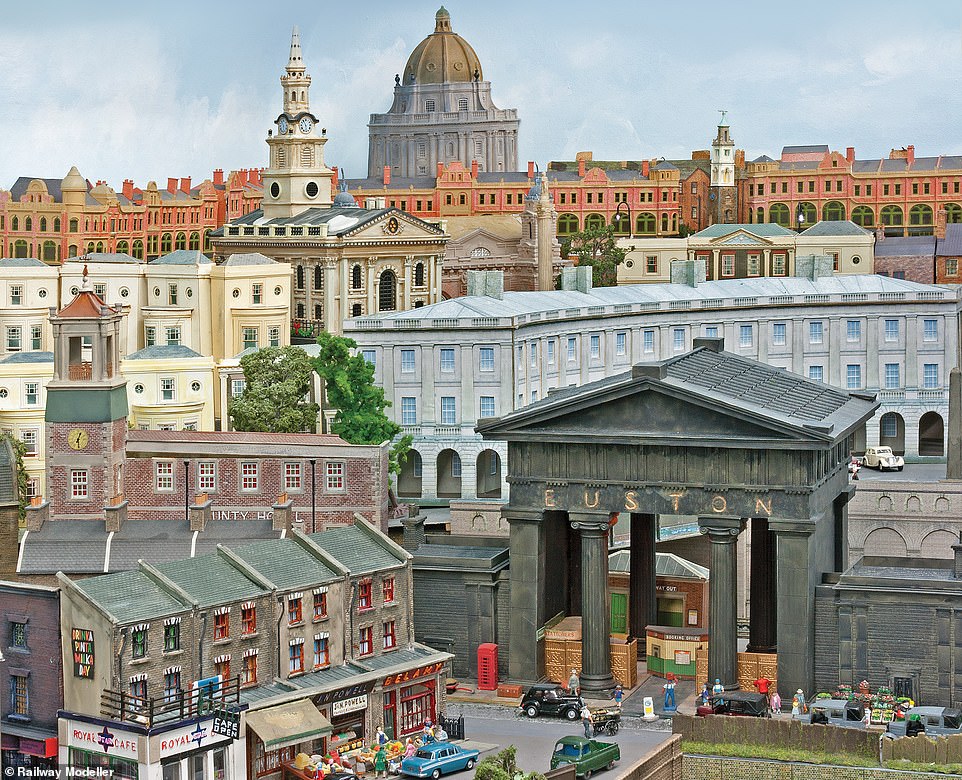 The set includes buildings that remain standing and those that have been demolished, such as the famous Euston Arch 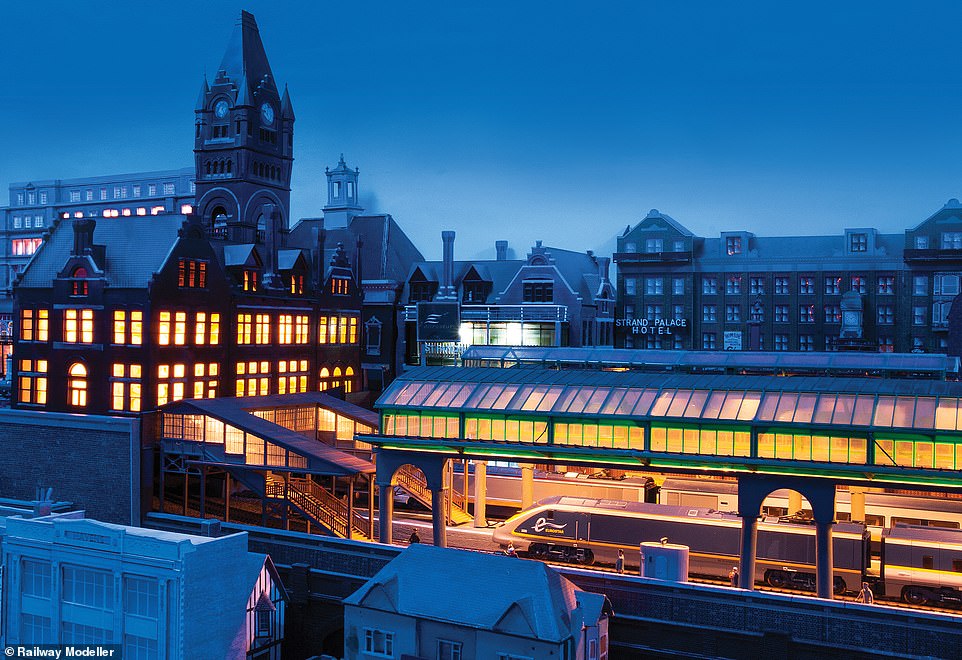 The pianist said he finds tinkering with the set in the attic of his Kent mansion to be the perfect way to escape the chaos of everyday life. Pictured: A station resembling Waterloo 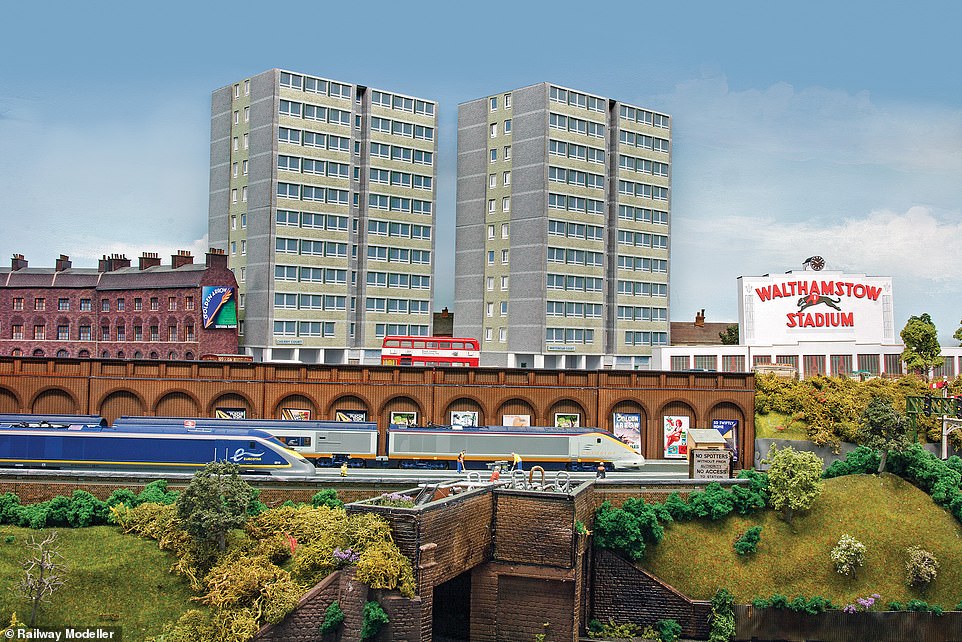 This scene includes Walthamstow Stadium, a dog-racing track, and a double-decker bus driving past two blocks of flats

Holland does not miss any details – with canal boats seen floating in the London Docklands, and recreation of buildings bombed out in the Blitz.

There is also an impressively authentic replica of Arnos Grove underground station in north London.

Next he plans to add St Pancras Station and several landmarks in the north of England.

Holland isn’t the only celebrity with a passion for model railways – Rod Stewart has also boasted about his own set. 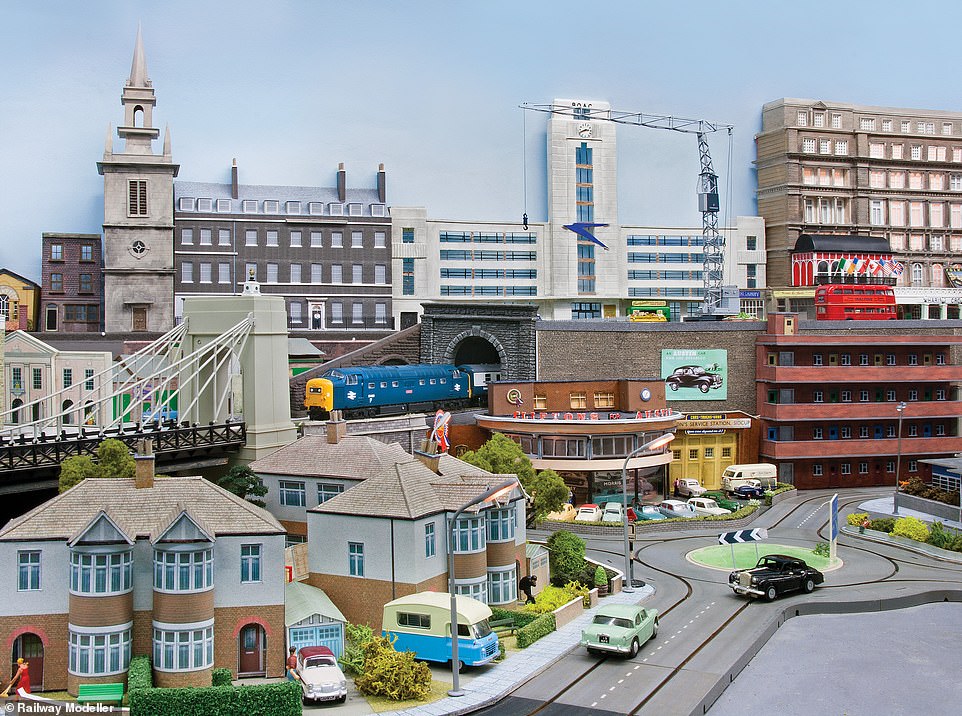 The set is a mishmash of different architectural styles, including a modernist office block and several semi-detached houses. This scene includes a number of random buildings from different parts of London 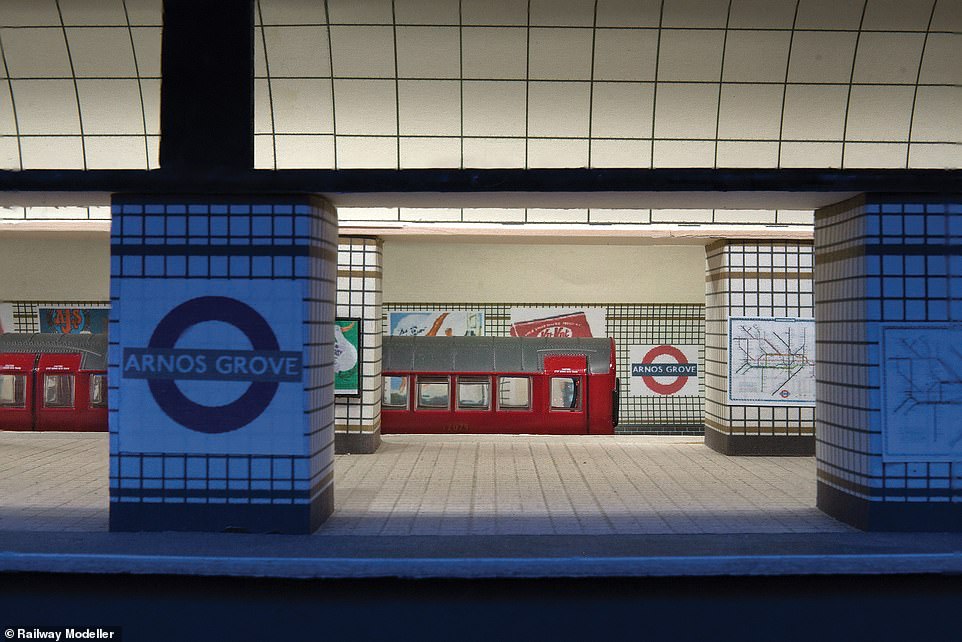 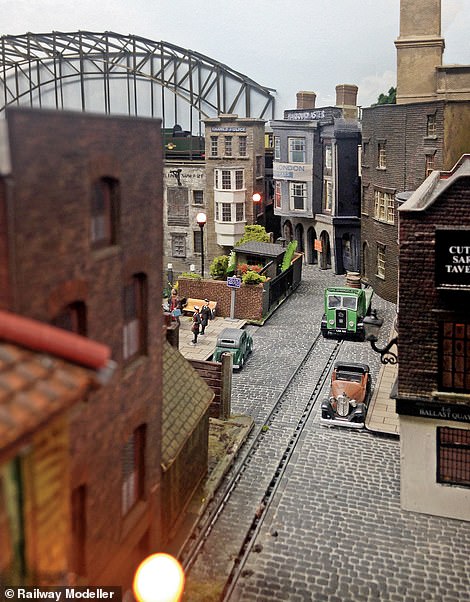 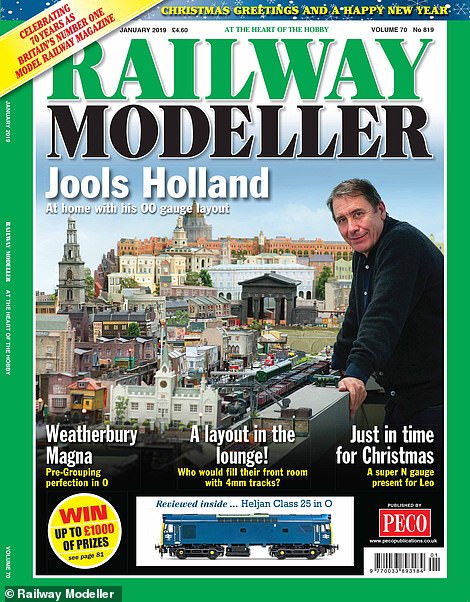 Holland’s track (left, in what appears to be a representation of Southwark) is featured on the front page of Railway Modeller magazine, (right) which hits the shops today

Railway Modeller magazine has the full interview and is in shops on Thursday 13th December.