London: Warner Bros has cut loose Johnny Depp from a new blockbuster movie following a damning court judgment in Britain earlier this week that found the actor had repeatedly assaulted his former wife.

In an Instagram post on Friday, Depp revealed he had been asked to resign from his role as Grindelwald in the Fantastic Beasts franchise and that he "respected and agreed to" the directive. 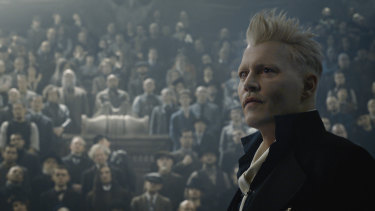 Johnny Depp will leave his role as Gellert Grindewald in the Fantastic Beasts franchise. Credit:Warner Bros

"The surreal judgement of the court in the UK will not change my fight to tell the truth and I confirm that I plan to appeal," he said.

"My resolve remains strong and I intend to prove that the allegations against me are false. My life and career will not be defined by this moment in time."

High Court judge Andrew Nicol on Monday threw out an attempt by Depp to sue The Sun newspaper over a 2018 online article labelling the Pirates of the Caribbean star a "wife beater".

The article questioned how author JK Rowling could support Depp's casting in the Fantastic Beasts franchise, which is based on a book written by the Harry Potter creator.

Justice Nicol found the paper's allegation against Depp was "substantially true" and that the actor had repeatedly assaulted his then wife Amber Heard.

Both Depp, 57, and Heard, 34, gave evidence before Justice Nicol in July during a three-week hearing at London's High Court, laying bare their private lives and making allegations of serious domestic abuse, drug-taking and affairs.

The case rocked Warner Bros and forced executives to consider whether to stick with Depp, reduce his screen time in the third instalment of the Fantastic Beasts franchise, or fire him.

The entertainment giant said the movie was still in production but would be delayed until the summer of 2022. The role of Gellert Grindelwald – which Depp has portrayed twice – will be recast, it added.

Depp said on Friday that he had been humbled and moved by messages of support in the days since the court ruling.

In his judgment on Monday, Justice Nicol found Depp assaulted Heard on more than 10 occasions, including during a three-day rampage in Queensland.

The court was told of an explosive argument inside a Gold Coast mansion rented from MotoGP world champion Mick Doohan in 2015 while Depp filmed the latest instalment of the blockbuster Pirates of the Carribean franchise.

In his ruling, Justice Nicol rejected a series of allegations Depp made about the altercation, including that Heard had put out a cigarette on her husband's face and sliced off the top of one of his fingers after throwing a vodka bottle.

Justice Nicol instead said Heard was "the victim of sustained and multiple assaults by Mr Depp in Australia".

The Sun celebrated the court decision as a win for victims of domestic violence.