Joe Biden on Thursday attempted to ‘clarify’ his comments suggesting the Latino American community is more diverse than African Americans.

The presumed Democratic nominee wrote on Twitter: ‘Earlier today, I made some comments about diversity in the African American and Latino communities that I want to clarify. In no way did I mean to suggest the African American community is a monolith—not by identity, not on issues, not at all.’

In an interview with NPR host Lulu Garcia-Navarro had asked Biden if he would stop Cubans from being deported if he became president. It sent Biden into a confusing comment about race in America.

By Thursday evening Biden had responded to the criticism. He did not use the word ‘sorry’ but added: ‘Throughout my career I’ve witnessed the diversity of thought, background, and sentiment within the African American community. It’s this diversity that makes our workplaces, communities, and country a better place. 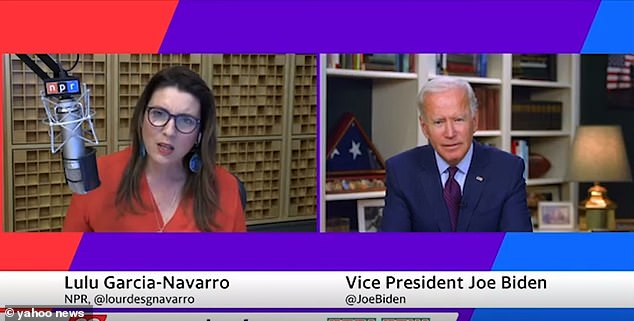 By Thursday evening Biden had responded to the criticism on Twitter

Donald Trump criticized his rival for ‘totally disparaging’ black people in the slip-up.

‘Wow! Joe Biden just lost the entire African American community. What a ‘dumb’ thing to say!’ Trump tweeted along with a link to a right-wing news website with coverage of the gaffe.

‘I just watched the clip, and Joe Biden, this morning, totally disparaged and insulted the black community,’ Trump told reporters gathered on the South Lawn.

‘What he said is incredible,’ the president continued. ‘And I don’t know what’s going on with him, but it’s a very insulting statement he made.’

Biden is heads and shoulders above the president when it comes to popularity among the black community, with almost every poll on the matter showing the presumed Democratic nominee ahead by several dozen percentage points. 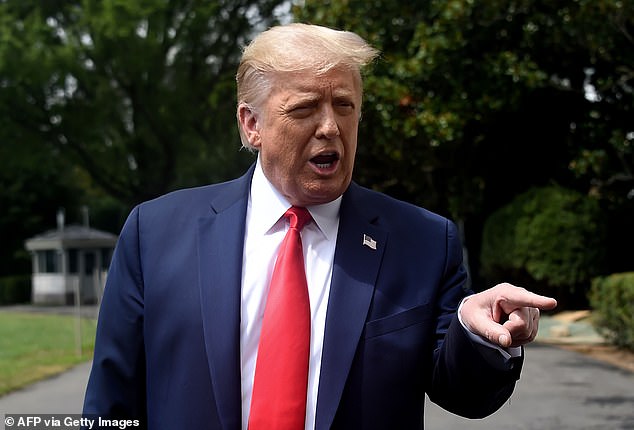 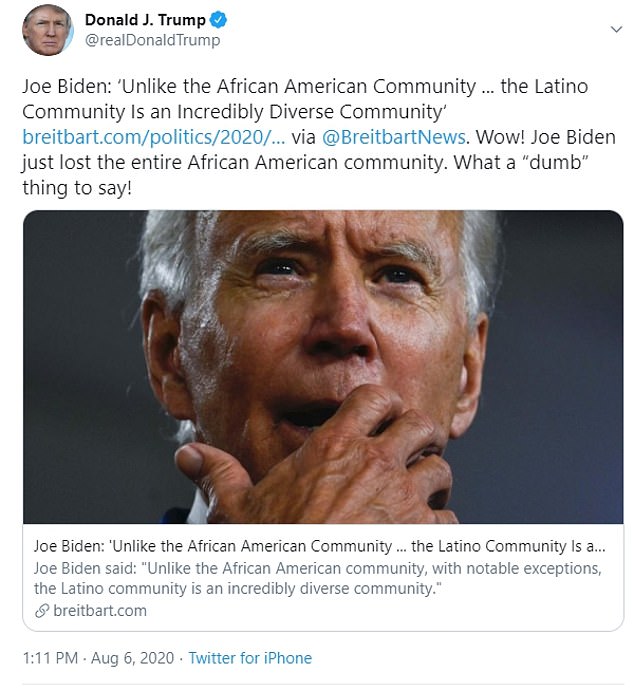 In a follow-up tweet to his White House remarks, Trump claimed Biden ‘just lost the entire African American community’ with those comments 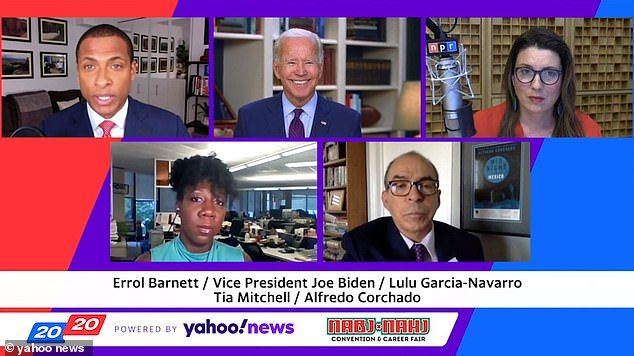 During that same interview, Biden stunned Garcia-Navarro’s co-interviewer CBS News’ Errol Barnett when he made the comment ‘Are you a junkie?’

The remarks came after the former vice president said he would not take a cognitive test despite goading from Trump that his Democratic rival wouldn’t be able to beat his score.

‘Mr. Vice President, your opponent in this election, President Trump, has made your mental state a campaign topic,’ Barnett posed. ‘Have you taken a cognitive test?’

‘No, I haven’t taken a test. Why the hell would I take a test?’ Biden said to Barnett during the interview, which aired in full Thursday, but clips were released Wednesday.

‘Come on man. That’s like saying, before you got in this program, did you take a test where you’re taking cocaine or not. What do you think? Huh? Are you a junkie?,’ the presumed Democratic nominee added with a laugh.

Barnett appeared confused by the response.

‘What do you say to President Trump, who brags about his test and makes your mental state an issue for voters?’ Barnett asked.

‘Well, if he can’t figure out the difference between an elephant and a lion, I don’t know what the hell he’s talking about,’ Biden said.

The Montreal Cognitive Assessment, the test in question, is a ten-minute test of cognitive abilities, which includes a question where it has the taker identify an animal such as an elephant, lion or camel – but the president assured that the further along the test goes, the harder it gets. 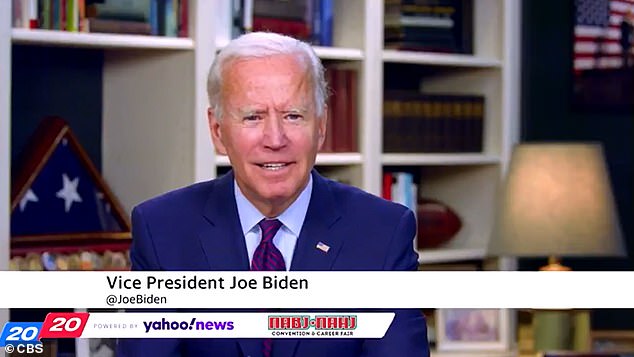 Biden also told the panel that he would not take a cognitive test despite goading from President Donald Trump that he should do so. Why the hell would I take a test?’ Biden questioned 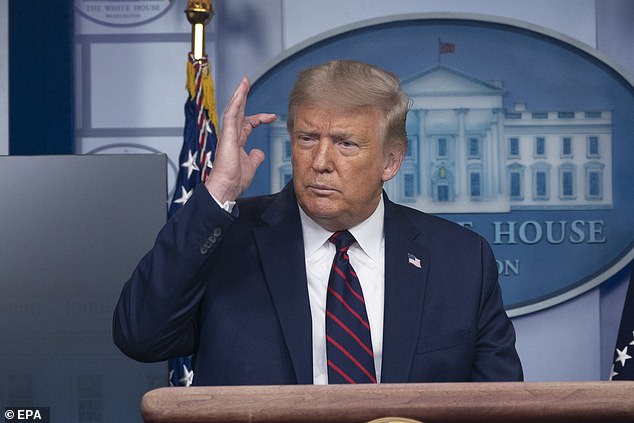 Trump bragged he has ‘aced’ the cognitive test and has challenged Biden to take it, claiming he wouldn’t pass.

‘Joe should take that test, because something’s going on. And, and, I say this with respect. I mean — going to probably happen to all of us, right? You know? It’s going to happen,’ he told Fox News last month.

The president’s test was given at Walter Reed National Military Medical Center in early 2018 by Navy Rear Adm. Ronny Jackson, who was then a White House physician but is not running for a Texas House seat as a Republican, The Washington Post reported.

Biden said he is looking forward to meeting the president in their three debates, where voters would be able to judge both candidates’ mental fitness for themselves.

His confirmation that he will participate comes as some Democrats have suggested Biden should set them out.

‘I’m so forward looking [sic] to sit with or stand with the president in debates. There’s going to be plenty of times,’ Biden said. ‘I am very willing to let the public to judge my physical as well as my mental fitness and, well, you know, to make a judgement about who I am.’

In an interview with ‘Fox News Sunday’ last month, host Chris Wallace told the president he also took the test and it wasn’t the ‘hardest.’

‘Well, it’s not the hardest test,’ Wallace said. ‘They have a picture and it says, ‘What’s that?’ And it’s an elephant.’

Trump shot back: ‘Yes, the first few questions are easy, but I’ll bet you couldn’t even answer the last five questions.’

Trump often brags about his mental prowess and has called himself a ‘very stable genius.’

Medical experts said the test does not measure a person’s IQ or intellectual abilities but is designed to flag the beginning of cognitive decline that could come with age or a medical condition such as Alzheimer’s or a stroke.

And the White House has not said why the president needed to take a test of his cognitive abilities.

Trump and his campaign have pushed for questions of Biden’s mental abilities –  at age 77 Biden is three years old than Trump – but it’s the president who has faced health questions, particularly after his commencement speech at West Point in June where he had difficulty walking down a ramp and had to use two hands to lift a glass of water. 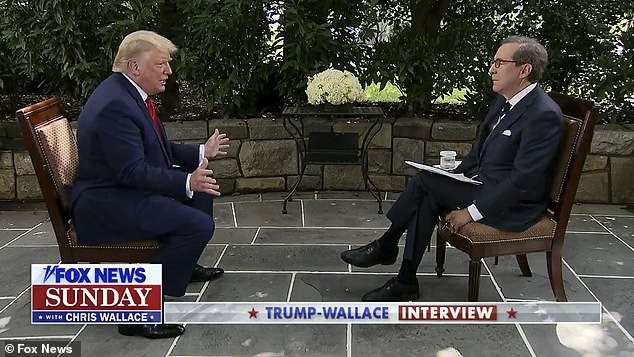 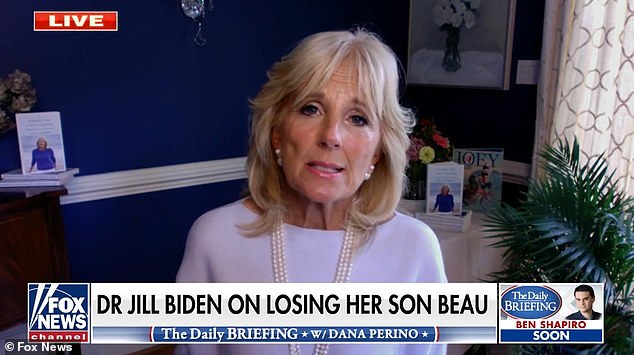 She told Fox News on Tuesday that it was ‘surprising’ the president would say that and argued the two men are close in age.

‘I think Donald Trump is really about Joe’s age right? I think there’s like two or three years difference. It’s surprising that he would say Joe wouldn’t be up to it and made those comments,’ Jill Biden said.

She also disputed Trump’s characterization that Joe Biden is hiding in the basement. Trump has repeatedly gone after Biden for hiding in his basement after Biden cut down on his campaign rallies because of the coronavirus pandemic.

‘You know, Joe is anything but that characterization. You know we’ve been campaigning, we’ve been listening to the experts, the scientists, and the doctors, and they have told us stay home and be safe,’ she said.