Jim Redmond, the father who rushed to help his son in one of the Olympic Games' most memorable and inspirational moments, died at age 81 on Sunday, according to the British Olympic Association (BOA).

The moment the BOA said will "never be forgotten" happened at the 1992 Barcelona Games where British runner Derek Redmond posted the fastest time in his heat in the 400m. He was a medal favorite and had already established himself as one of Britain's best athletes. But 15 seconds into the semifinal race, he pulled his hamstring and fell to the track.

Shortly after he brushed off officials and began heavily limping around the track toward the finish line, a man without a track credential appeared on the TV screen of the race. It was Derek's father, Jim, who had rushed down the stadium stairs, dodged officials and gone straight to his son.

Derek broke down in his arms and they finished the race together. The International Olympic Committee called it "one of the most inspirational moments in Olympic history."

Our thoughts are with Derek Redmond and his family following the death of his father, Jim.

Together, they brought us one of the most inspirational moments in Olympic history. ❤️ pic.twitter.com/IyHekB2fyP

Derek, who was 26 at the time of the Games, described the moment to NBC Olympics in a profile leading up to the 2012 London Olympics. Via NBC Sports:

“As I turned into the home straight, I could sense this person was about to try and stop me,” Derek said. “I was just about to get ready to sort of fend them off, and then I heard a familiar voice of my dad. He said, ‘Derek, it’s me. You don’t need to do this.'”

Derek said he shouted to his dad that he wanted to finish the race.

At one point, Derek noticed stadium security, not knowing who Jim was, having removed guns from their holsters.

“It’s the only time I’ve ever heard my dad use bad language,” Derek said. “He just goes, ‘Leave him alone, I’m his father.'”

"I did what animals do, what humans do; it's instinctive," said Jim. "Everyone does it. It just so happens that most people think about doing it, but I actually went on there to help."

Derek said he told himself he would finish "if it's the last race I ever run." He underwent surgery and 18 months of rehab, but the hamstring never fully healed. Though he never competed in track again, he did play basketball professionally as well as rugby 7s. He has worked as a motivational speaker in the decades since those Games.

With the Olympics on home soil in 2012, London Games organizers asked Jim to be a torchbearer. It was near the family's hometown of Northampton. Derek, family and friends rented a bus to follow Jim on the route, per SI. Derek said he joked that if Jim didn't make it, the son would carry him. 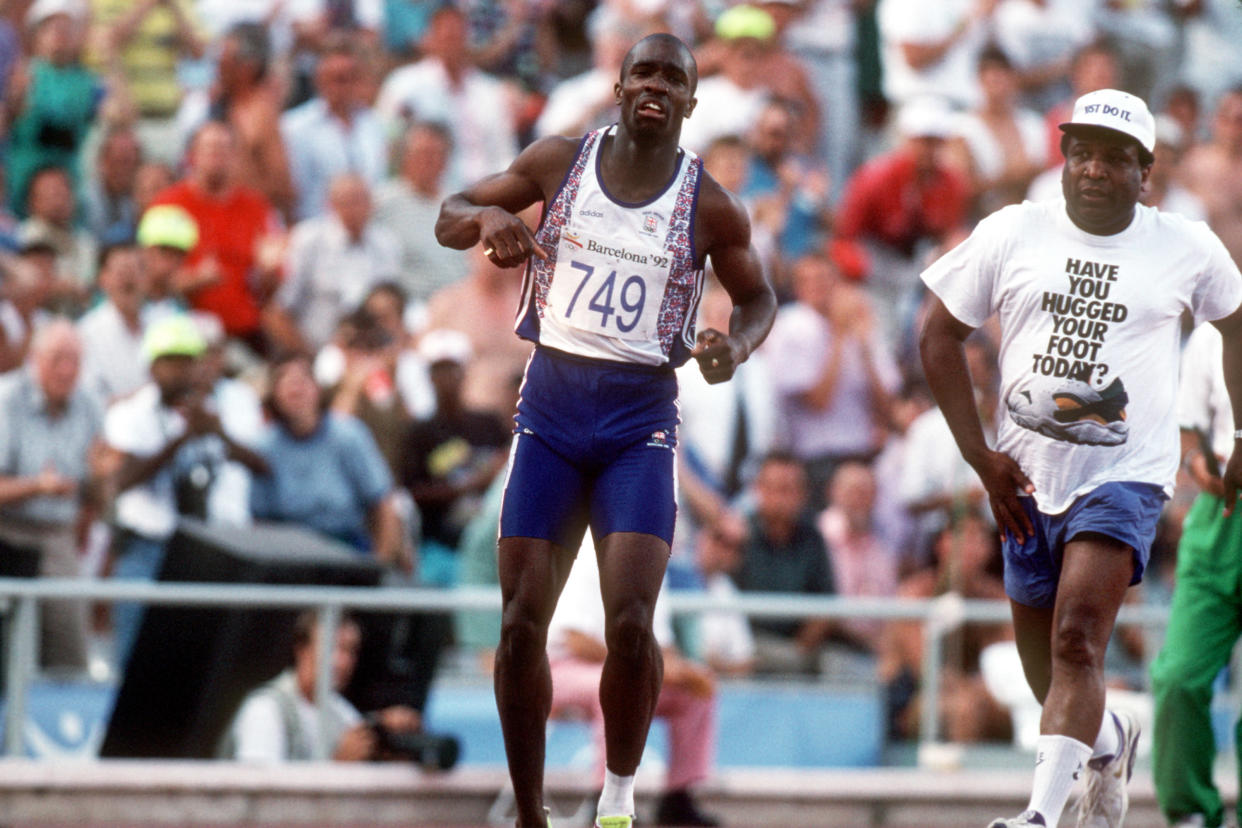