A second woman is claiming that she was ‘directed’ to have sex with lawyer Alan Dershowitz by one of his clients, billionaire felon Jeffrey Epstein.

Sarah Ransome, who is currently suing Epstein and his team of alleged enablers, claims that she was trafficked by the pedophile starting in October 2006 and into April fo the following year.

It was during this time that she was told by Epstein to have sex with Dershowitz according to the New York Daily News.

That allegation was revealed in a November 7 telephone conference according to the report, the transcript of which has since been sealed until the end of the month.

Dershowitz would have been defending Epstein at the time of the alleged sexual encounter, having been hired to work on the case in 2005 when a number of underage girls began coming forward and telling police they were paid to have sex. 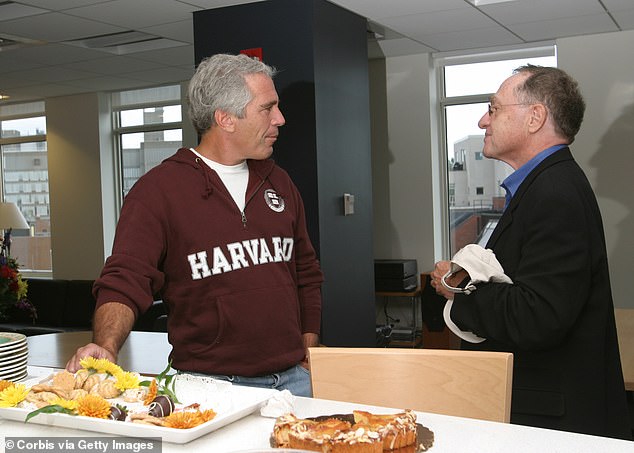 Friends: Alan Dershowitz is being accused of having sex with a second Epstein victim (pair above in 2004)

This makes Ransome the second woman to allege that she had sex with Dershowitz at the behest of Epstein.

Virginia Roberts alleged in a court affidavit that she had sex with the lawyer six times.

Dershowitz has denied that claim for years, and said that he only once received a massage from one of Epstein’s female employees and that the woman was not a minor.

Roberts claims that she was just 16 the first time she had sex with Epstein.

The case is back in the spotlight after a blistering expose in The Miami Herald that took a look back at the allegations made against Epstein.

That piece included interviews with a number of Epstein’s alleged victims.

What the public and his accusers did not know at the time was that he had secretly struck a deal with federal prosecutors that spared him from charges that could have put him away for the rest of his life.

When the deal finally came to light years later, it immediately raised suspicions that Epstein – a man who counted Bill Clinton and Donald Trump among his friends and had some of the finest legal talent in America as his lawyers – had used his wealth and political connections to win special treatment.

Those allegations flared anew after the Herald published interviews with the alleged victims and took a closer look at Alexander Acosta, who as the U.S. attorney in Miami in 2008 approved the secret deal.

Epstein, 65, reached the non-prosecution deal with Acosta’s office while under investigation on suspicion of sexually abusing at least 40 teenage girls.

Under the deal, he pleaded guilty to two state charges, did his time in jail, paid settlements to many of the alleged victims and registered as a sex offender.

He could have faced a far more severe penalty if federal prosecutors had pursued a draft 53-page indictment that was never filed and included sex trafficking charges.

Some of Epstein’s accusers are now arguing that their rights were trampled under a federal law that says crime victims must be informed about plea bargains.

One of Epstein’s lawyers, Roy Black, has said there was no conspiracy to violate victims’ rights, and the plea agreement was ‘no sweetheart deal by any stretch of the imagination.’

Even if the plea bargain is nullified, the final decision on bringing charges would rest solely with the Justice Department.

On Tuesday, Epstein settled a defamation lawsuit brought against him by a lawyer for some of the accusers, Bradley Edwards, who said Epstein tried to derail his representation of the women and ruin his career.

In settling, Epstein apologized and agreed to pay an undisclosed amount.

Edwards said some of the accusers – some of whom say they were 13 or 14 when they were molested – were prepared to testify in the lawsuit and may yet get their day in federal court.

Congressional Democrats are calling for an internal Justice Department investigation.

Acosta has not commented about the case during the recent media coverage. He was asked briefly about the non-prosecution agreement at his Senate confirmation hearing.

According to court papers, Epstein had a Palm Beach mansion where girls were brought for what they were sometimes told were massage sessions.

He allegedly had female fixers who would look for suitable girls, some of them recruited from Eastern Europe and other parts of the world.

Before the scandal broke, Epstein was friends with Trump and had visited the real estate developer’s Mar-a-Lago resort.