Today The Sunday Age kicks off a 30-day celebration of Melbourne as it emerges from its COVID-induced hibernation. It has truly been a year like no other and, even without a further outbreak, Melburnians will take some time re-embrace their city again. But, as the Marvellous Melbourne series will reveal, there are green shoots appearing across the city. It's our intention to help nurture them, make sure you know about them, and encourage you to participate and contribute.

Melbourne's retail, cultural and culinary sectors need you more than ever. The city centre is starting to fill again with shoppers, restaurants are finally serving food not handed over in plastic containers, and the arts world is beginning to open its doors. 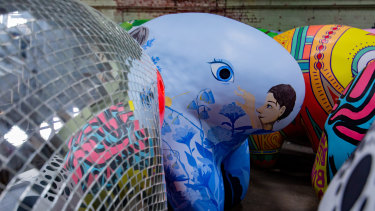 But many of them are having to be creative in the way they operate. Some are finding themselves well suited to the unusual times in which we live. Not since the 1970s have drive-ins been quite so popular. In a world in which enforced distancing and preservation of bubbles afforded by cars has come into its own, they have become an ideal way to spend an evening out.

This year is the 150th anniversary of Melbourne's Royal Children's Hospital and to celebrate the occasion the hospital has commissioned an art trail. A pop-up taster will be unveiled next month at various sites across Melbourne including the Bourke Street Mall, Melbourne Museum, the St Kilda foreshore and in Geelong. The main event next year will see hundreds of sculptures dotted around the city.

Melbourne's sporting life is also making a comeback. Melbourne Cricket Club boss Stuart Fox is hopeful that more than 25,000 will be allowed into the MCG for the Boxing Day Test. For a stadium that has sat idle for the longest time in its history, this will be a welcome return.

The Australian Open is set to go ahead, and chief executive Craig Tiley has hatched a plan to capitalise on the number of players arriving in the country from mid-December, putting forward a proposal to stage more tournaments in Melbourne after the Open wraps up on January 31. And Grand Prix organisers are hoping authorities will give the green light to a reconfigured Albert Park circuit that caters for crowds of up to 50,000 at the Formula One season-opener in Melbourne next March.

Melburnians have earned a summer that has on offer some of the experiences that make it such a great city to live in. On Friday, Victoria chalked up three weeks with no positive infections or deaths. That is an achievement that only a couple of months ago would have been inconceivable.

The lockdown was a marathon effort that gave everyone a singular focus. The 120 press conferences headed by Premier Daniel Andrews, normally only viewing for die-hard political wonks, became a must watch part of the day. The Age's live blogs were some of the most well-read journalism we have published. You told us that you enjoyed the sense of community from being able to share your thoughts with others in the comments section.

We are hoping to hear from you again over the next 30 days. Marvellous Melbourne was a term given to the city in the 1880s, when Melbourne was one of the richest, fastest-growing, most swaggering cities in the world. Melbourne is still Marvellous, of course, and we hope this series helps celebrate everything that makes it special – and to think about what comes next.