Facebook has banned the sharing or viewing of our news articles on its platform. For independent journalism straight from the source, download our app and sign up to our newsletters.

There was a time in Australian politics when rolling the leader of a political party mid-term, like some Liberals wish to do to Opposition Leader Michael O’Brien, was the ultimate act of treachery. That treachery intensified when the public felt like they had some role in installing the leader to their position, and therefore had a buy-in.

For so long, it was an unwritten rule of politics that such an act of bastardry would come with a transaction cost. In economics, a transaction cost is the expenses incurred when buying or selling goods like an agent’s commission or broker’s fee. In politics it usually comes in the form of a dip in the polls or encounters with angry constituents. 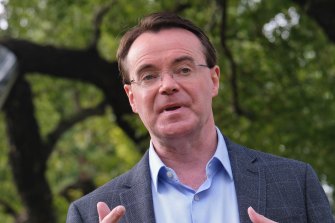 Victorian Opposition Leader Michael O’Brien is under pressure from some of his colleagues.Credit:Luis Ascui

But in both cases, the net gain is meant to make it worthwhile.

But the whole idea of a transaction cost for rolling the leader of a political party has somewhat diminished in the past 15 years. With each switch of prime minister from Rudd to Gillard to Rudd; Abbott to Turnbull to Morrison, the rules by which we understood politics were rewritten. The transaction cost of such treachery dropped.

While this rule may have changed over time, one rule that remains firmly in place is that politics is relentlessly driven by the laws of arithmetic.

In his autobiography Lazarus Rising, former prime minister John Howard points out that if a political party thinks its electoral arithmetic will be boosted by changing the leader it will make that change irrespective of the circumstances.

“Sentiment and gratitude for past favours pay no part in it,” he writes.

Howard also believes rolling a leader in opposition, in order to win an election, isn’t “wrong or disloyal”. 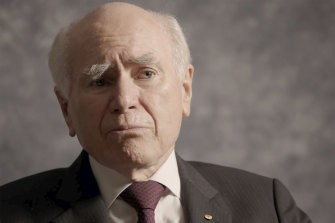 “It had not been disloyal of Rudd to challenge Beazley, nor had it been disloyal of me to work to regain the leadership of the Liberal party in 1994/1995 when Alexander Downer’s position became increasingly unsustainable,” Howard writes.

“I thought it was unfair of the Liberal Party to throw me out of the leadership in 1989 after all that I had been through in fighting both the ALP and the madness of Bjelke-Petersen in 1987, but fairness didn’t come in to it.”

“The relentless laws of political arithmetic had driven a decision”.

It’s for these two reasons – the relatively low transaction cost and the belief the Liberals will flogged at the next state election – that Michael O’Brien is in a spot of bother.

Last week, during a shortened sitting period on Spring Street, the plot to replace O’Brien shifted from a handful of MPs whinging at the pub to a more co-ordinated project. Two backbenchers were sent to gauge support for a switch among the reduced number of MPs at Parliament House.

Driven by an overwhelming fear of losing their seats, the small group of plotters agreed that for the Liberals to have any chance in 2022, a new leader would need 18-months in the job. Based on that timeline, they agreed that there would need to be a spill of the leadership before the Budget in May. That leaves just three partyroom meetings – two in March and one in early May – for matters to be resolved. 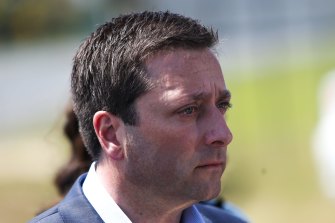 Matthew Guy appears to be the obvious choice to replace Michael O’Brien as leader.Credit:Morgan Hancock

The great problem with this plan, and one that O’Brien backers continually ask; if not him, then who?

Matthew Guy appears to be the obvious choice but he is unlikely to bring on a spill to challenge O’Brien. Those who want Guy back hope he’ll put his hand up in the event the position becomes vacant. It’s a gamble.

Should Guy decide not to run, the partyroom is bitterly divided on who to support. Anyone from Richard Riordan, Tim Smith, Louise Staley or Ryan Smith have the potential to do a Steven Bradbury and fall over the line.

Should Guy be convinced to put his hand up, it is looking increasingly likely that the party would take him back. Perhaps that provides some sense of just how gloomy things have become for the opposition.

It was a little over two years ago that Guy led his party to one of the most humiliating losses in the history of the Victorian Liberal Party. Even those rusted-on Liberals in Hawthorn and the southernmost part of the Mornington Peninsula voted Labor. But things are grim.

O’Brien’s strength is his experience. He served as Treasurer in the Napthine Government and had a successful career as an industrial relations lawyer and commercial barrister before landing on Spring Street.

Even his critics admit he’s a nice Guy. They speak about him the same way the federal National Party talk about Michael McCormack. A decent fellow, a safe pair of hands but lacking the leadership skills needed for such a role.

If the plotters do follow through on their timeline and challenge O’Brien before May it will not be a leadership spill driven by personal ambition or animosity, but by the laws of arithmetic.