East Brunswick op shop The Kala Space does something simple but radical when it hires women experiencing homelessness or family violence: there are no set start or finish times.

Its founder, National Homeless Collective chief executive Donna Stolzenberg, started the flexible hours after a work-for-the-dole participant said she could not come in until 11am. 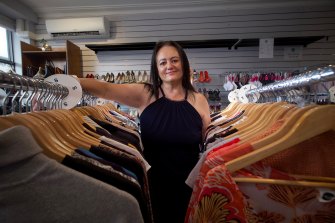 The woman had slept in a park in St Kilda and everything she owned was soaking wet after an overnight downpour.

“She said: ‘I have to go to the laundromat but don’t have any money, so I will have to beg first,” recalls Ms Stolzenberg, who has been named the 2021 Victorian Australian of the Year.

“I started to ask questions of women with unstable accommodation and got some incredible insight into homelessness and employment.”

“If they didn’t show up to work they would be fired, but sometimes they couldn’t have a shower so they were embarrassed. They said if there was a job where they didn’t have to start or finish at a particular time it would be amazing, but that would never happen.”

Hence The Kala Space, named after a word in Sanskrit referring to time, which employs six women experiencing homelessness or family violence.

“They all start work when they can, finish when they can, have no set times, get paid for the hours they do work and don’t have to give me an explanation if they need time off,” Ms Stolzenberg says

A team of volunteers helps out if there are too few employees at any one time.

Ms Stolzenberg says the social experiment has been a game changer: “As the women become more stable, they become more reliable.”

The Kala Space is one of a number of sub-charities run by the National Homeless Collective, which was founded in 2015 by Ms Stolzenberg, an Indigenous woman and mother of five.

It all started with a sleeping bag drive for homeless people from her loungeroom in Hillside, in Melbourne’s west, after Ms Stolzenberg was haunted by the sight of a homeless man, whom she thought was dead, asleep on a park bench on a cold night.

Within eight weeks, Ms Stolzenberg had collected 3500 donated sleeping bags and blankets, which she distributed from a trailer on weekends.

After three months, she quit her job at the Australian Tax Office and founded the National Homeless Collective.

Another of the sub-charities – the Period Project – was inspired by a woman Ms Stolzenberg met at Flinders Street Station while she was delivering sleeping bags.

“She asked me if I had any tampons, she was literally sitting there bleeding on the street.”

The woman, who had just been released from prison, told Ms Stolzenberg she had an access visit the next day with her children, who were in foster care. “She was about to steal tampons – if she got caught she would probably have gone back into remand and got her access revoked.”

And so Ms Stolzenberg started the Period Project, which provides menstruation packs to homeless women.

They are also distributed to those leaving Melbourne’s women’s prison, Dame Phyllis Frost Centre, along with a voucher to spend at The Kala Space.

Ms Stolzenberg is also the woman who started a crowd-funding campaign for Michael Rogers, also known as Trolley Man, who tried to fend off a terrorist with a shopping trolley in the 2018 Bourke Street attack. 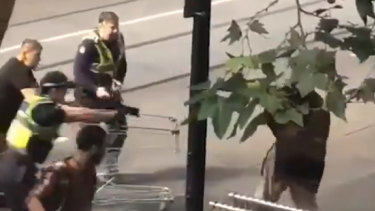 The fundraiser, which was intended to replace Mr Rogers' phone, received a whopping $145,000 in donations but many people turned on Ms Stolzenberg after it emerged the man lauded as a homeless hero had a long criminal history.

“I got so much hate, people messaging me, calling me all the names under the sun and saying how dare I support a criminal and they wanted their money back,” Ms Stolzenberg said.

“It was frustrating because it was always obvious to me there was a high chance he would have a criminal record. He still tried to save the cops.”

Ms Stolzenberg visited Mr Rogers every week after he was jailed for theft. However she has now lost touch with him. “I loved spending time with him, but I couldn’t help him any more, he needed more professional help than we could offer him.”

Ms Stolzenberg hopes to use her platform as Victorian Australian of the Year to advocate for a world where employing homeless people with flexible hours is the norm.

“It would seem abhorrent now not to employ someone in a wheelchair,” Ms Stolzenberg says. “I want there to be a day we look back and say we can’t believe we didn’t accommodate people experiencing homelessness in the work place.”