Premier Giuseppe Conte had recently written to interior minister Matteo Salvini demanding that minors be allowed off the boat, and Salvini initially refused.

But he wrote back Saturday with a three-page missive of his own saying he would, stressing that the move was Conte’s choice and that it did not set a precedent.

Spanish aid group Open Arms said the decision concerned 27 unaccompanied minors who were picked up off Libya earlier this month along with more than 100 other migrants. 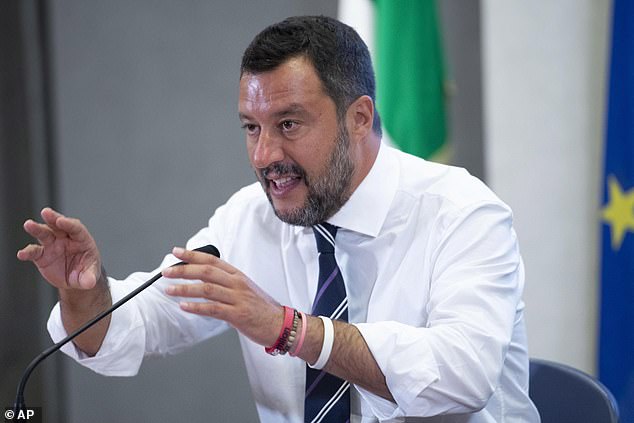 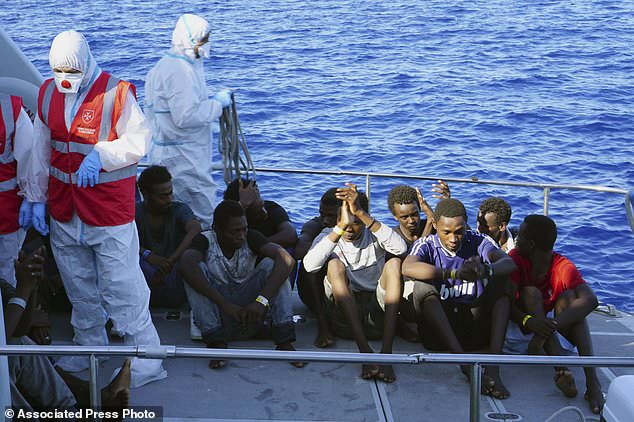 Migrants are evacuated by Italian Coast guards from the Open Arms boat at the coasts of the Sicilian island of Lampedusa, southern Italy, August 17

The minors were transferred Saturday to an Italian border patrol boat for disembarkation and processing on the Sicilian island of Lampedusa. The fate of the other migrants still aboard the Open Arms off Lampedusa remained uncertain.

The standoff laid bare the split between Salvini’s anti-migrant League and the 5-Star Movement, which together govern Italy.

Salvini is seeking to end Conte’s populist coalition with a no-confidence vote and early election that Salvini hopes will give him the premiership.

Open Arms had won a legal battle to enter Italy’s territorial waters, and Conte had secured offers from Spain and five other European Union nations to take the migrants in.

But the ship remained off the coast because of Salvini’s policy prohibiting humanitarian aid groups from docking. 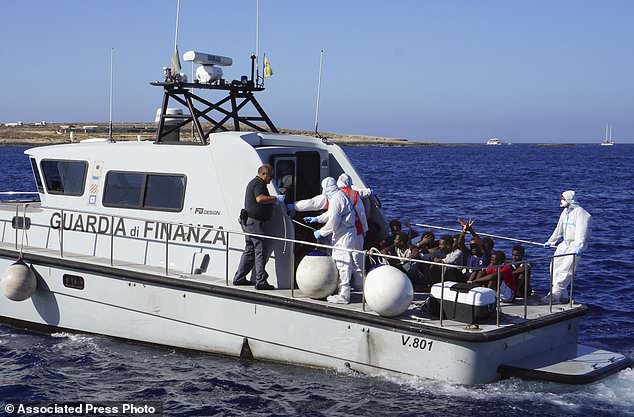 Open Arms chief Oscar Camps warned Saturday that tensions were rising and fights breaking out that threatened the safety of all on board.

He warned European leaders that as of Saturday ‘we cannot be responsible nor guarantee the security of the people on board Open Arms.’

Amid the standoff, the aid group filed a formal complaint with prosecutors in Sicily alleging that both the migrants and the crew were being held hostage. Salvini and other ministers have been investigated in the past for alleged kidnapping stemming from previous standoffs, but no charges have ever been brought. 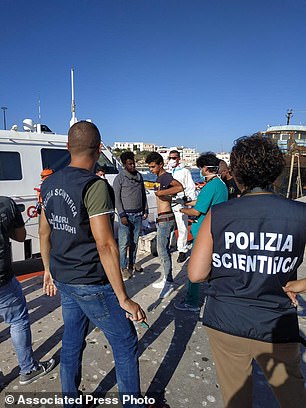 The standoff over the Open Arms came as another humanitarian rescue boat, the Ocean Viking, maintained its course off Italy with 356 migrants aboard and no port to disembark. The Norwegian vessel had plucked the migrants to safety in several rescues in the past few days and is operated by two humanitarian groups, Doctors Without Borders and SOS Mediterranee.

And separately, the sole survivor of a tragedy that he said killed 14 others recalled how he was shouting for help to passing boats and a helicopter but no one heard his pleas.

Mohammed Oga, an Ethiopian, spoke from a Maltese hospital, where he was taken after finally being rescued when his rubber dinghy was spotted by the European border agency Frontex.

In an interview with Malta TV, Oga said the dinghy was carrying 15 people in all, including a pregnant woman, and that he had paid 700 euros to smugglers in the Libyan capital Tripoli for passage to Italy.

‘I was shouting to seek help to the helicopter and to the boats that were passing,’ he said.

Safe in a Maltese hospital, he said he was feeling good but uncertain about the future.