London: Italians are being asked to sweat through the European summer a little more than normal as the government enlists the help of its citizens to wean itself off its Russian gas.

Under the new law, dubbed Operation Thermostat by the local media, air conditioning in public buildings, including schools and government ministries, cannot be set lower than 27 degrees celsius from this month. The measure will last until April 2023, and will also prevent heating systems next winter from lifting temperatures above 19 degrees. 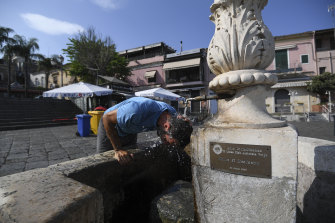 A man attempts to cool himself down at a fountain in Aci Trezza, Sicily, during last year’s heatwave.Credit:AP

Mario Draghi, Italy’s prime minister, invoked the idea of collective sacrifice in solidarity for those in war-torn Ukraine as justification for the measure, which aims to save four billion cubic meters of gas this year. The figure is about equal to the yearly consumption of 2.7 million homes.

“I believe the question is between peace and having working radiators, or air conditioning in summer. I think this is the question we must ask ourselves,” Draghi said last month, announcing the plan.

“We do not want to depend on Russian gas any longer because economic dependence must not become political subjection.”

The summer months of June, July and particularly August can be scorching in the southern European nation, with maximum temperatures rarely dropping below 30 degrees. Last year it reached 48.8 in Sicily – thought to be the hottest temperature recorded in Europe. 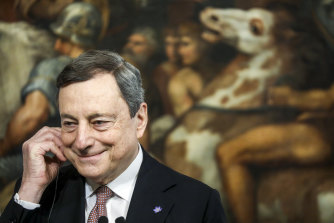 Mario Draghi, Italy’s prime minister, has called on Italians to make a sacrifice to reduce dependence on Russian energy.Credit:Bloomberg

The rules don’t apply to hospitals or nursing homes – but will include classrooms, post offices and local government buildings. Draghi is hoping that private companies and citizens in their own homes will follow suit to support the energy-saving effort.

There is a two-degree buffer granted by authorities on either side but fines for those who do not comply range from €500 to €3000 (AU$746 to $4480). It remains unclear how it will be policed.

As Moscow this week cut off gas supplies to two European Union members, Poland and Bulgaria, fears have again been raised about the future of the bloc’s energy supplies.

The suspensions were the first since Russian President Vladimir Putin said last month that “unfriendly” foreign buyers would have to pay in roubles instead of other currencies. The demands have weaponised gas supplies and challenge the EU’s ability to maintain a united front against Moscow. 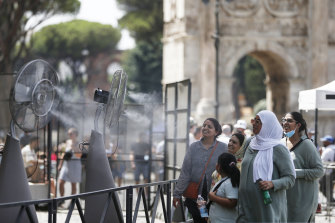 People cool down in front of fans at the Colosseum during last year’s heat wave.Credit:AP

Italy imports 95 per cent of the gas it uses and 40 per cent of that comes from Russia. Draghi, an economist and president of the European Central Bank for the past decade, has made the energy transition among his top priorities since he became prime minister in February last year.

His government has been seeking alternatives since Russia’s invasion of Ukraine on February 24 including new deals to import gas from Angola, Algeria and the Republic of Congo.

Draghi now believes Italy can end its reliance within 18 months after previously stating it could take up to two years. He is also confident the nation’s gas needs are covered until October, even if Moscow turns off the tap.

“Diversification is possible and can be implemented in a relatively short amount of time – quicker than we imagined just a month ago,” he said in a recent interview.

The government is also evaluating the inclusion of a rule to limit the number of street lamps lit and the hours of lighting.

While Europe, like other Western nations, has spent the past few months imposing sanctions on Russia – from travel bans to asset freeze, they had convenient not addressed the elephant in the room – gas.

Russia is Europe’s largest natural gas supplier, meeting 33 per cent of the region’s demand in 2021, up from 25 per cent in 2009. It also relies heavily on revenues from oil and natural gas, which in 2021 made up 45 per cent of Russia’s federal budget. But now the EU has announced that it plans to slash gas imports by two-thirds by 2023 in response to the war.

But Italy’s approach has its critics. Public Administration Minister Renato Brunetta took them on this week in an interview with Milan’s daily newspaper Corriere della Sera, saying it was also an important educational measure.

“It is understandable that any community, in the face of a similar sequence, has selfish deviations and that some say ‘enough, we can’t take it any more’,” he said. “[But] it reminds me of my mother who told me ‘when you leave the room, turn off the light’.

“I intend to do much more by putting solar panels on the roofs of a million public buildings, with particular reference to schools. It would not solve the dependence on Russian gas, but it would have enormous educational value.”

The International Energy Agency says the growing use of air conditioners in homes and offices will be one of the top drivers of global electricity demand over the next three decades.

Using air conditioners and electric fans to stay cool already accounts for about a fifth of the total electricity used in buildings around the world – or 10 per cent of global electricity consumption.

Less than a third of global households own an air conditioner, but in countries such as Australia, the United States and Japan, more than 75 per cent of households have air conditioning, compared to just 8 per cent of the 2.8 billion people living in the hottest parts of the world.

The issue is particularly sensitive in the fastest-growing nations, with the biggest increases coming in hot countries such as India – where the share of AC in peak electricity load could reach 45 per cent in 2050, up from 13 per cent today.

“Using less energy is a concrete way to help the Ukrainian people – and to help ourselves,” he said.

“With little or no discomfort on our part [we] can reduce the flow of money to Russia’s military and help put us on a path to a cleaner and more sustainable planet.”

He estimated turning down the thermostat by just 1 degree would save around 7 per cent of the energy used for heating, while setting an air conditioner 1 degree warmer could reduce the amount of electricity used by up to 10 per cent.

The action against Russia could fast-track the aims of European leaders to shift away from fossil fuels in the coming years, as part of international climate targets which aim to limit global warming to below 1.5 degrees compared to pre-industrial levels. Critics of net zero policies have called for them to be revised post the Ukraine war and rising prices, but this week 100 EU cities – including Barcelona, Munich, Stockholm, Lisbon, Budapest and Rome committed to hitting that target by the end of the decade.

As of April 1, it is now illegal for French cafes, bars, restaurants and other establishments to operate heated terraces. The French environment ministry estimated that the country’s outdoor heating produced 500,000 tonnes of CO2 annually – the equivalent to the average yearly emissions from 300,000 cars.

Brussels, Edinburgh and Milan have also used car-free Sundays to promote public health, community-oriented spaces and cultural events, with motorists told that leaving their car at home every Sunday could save households on average €100 a year.

Birrol says Russia’s invasion of Ukraine has fuelled an unnecessary cost-of-living crisis that’s being felt most painfully by those who can afford it least, especially in developing economies.

“At the same time, we cannot lose sight of the climate crisis that, left unchecked, will bring even greater disruption and suffering,” he said.