Gaza City: The Israeli army has damaged a school run by the United Nations Relief and Works Agency for Palestinian refugees in an air strike carried out in the early hours of Thursday.

The army had struck Hamas targets in response to incendiary balloons launched into southern Israel from the Gaza Strip, and a spokeswoman said that "during the operation, a school building was accidentally damaged." 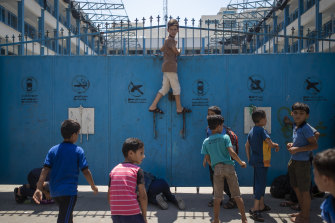 Palestinian schoolboys try to look from the door of a United Nations-run primary school at damage caused by an explosion, in Gaza City.Credit:AP

"The incident is being reviewed," she added.

"Explosive balloons continued to be launched from Gaza into Israel on Thursday, causing fires on land across southern Israel," the Israeli Defence Forces tweeted. 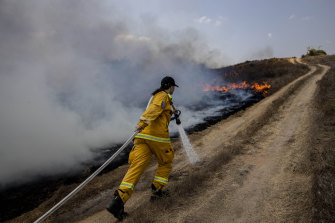 An Israeli firefighter attempts to extinguish a fire near Or HaNer Kibbutz caused by a balloon launched from the Gaza Strip on Wednesday.Credit:AP

Abu Hasna, the media adviser of UNRWA in Gaza, told reporters: "It seems that the UNRWA Beach Primary School got some damage by an Israeli raid last night on western Gaza."

The Hamas Interior Ministry released a statement accusing Israel of targeting the school with a missile.