Crimean Tatars fear the Kremlin, after annexation, is chipping away at identity of the 250,000-strong Muslim ethnicity. 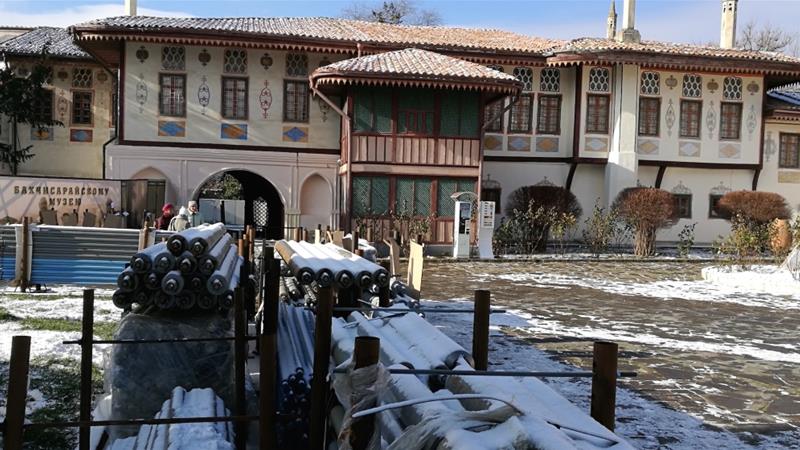 Bakhchisaray, Ukraine – The mosque looked like a bandaged patient.

The 500-year-old limestone building was wrapped in wooden scaffolding and long pieces of cloth that hid geometric ornaments and Koranic calligraphy.

Next to it lay heavy bundles of steel rods that seemed alien in the courtyard of the seemingly weightless, palatial complex out-of-a-fairy-tale, built for Crimean Khans. The dynasty of Genghis Khan’s descendants was dethroned after tsarist Russia’s annexation of the Black Sea peninsula in 1783. 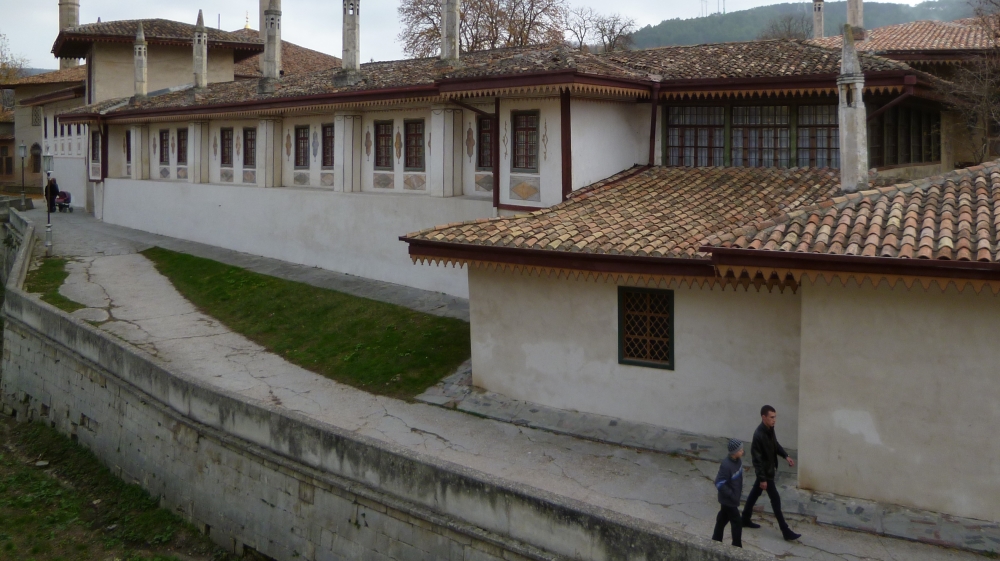 In January, almost four years after Moscow’s second annexation of Crimea, pro-Russian authorities started restoring the oldest and holiest part of the complex – the Big Khan Mosque built in 1532. They also announced plans to restore the entire palace.

But experts, community leaders and Ukrainian officials have lambasted the restoration as the destruction of the complex’s authenticity. They call it part of Kremlin’s drive to reshape, ban and erase the cultural identity of Crimean Tatars, a Muslim ethnicity of 250,000 that largely resisted Crimea’s return to Russia.

“This is a blueprint for the restoration of the entire palace,” Edem Dudakov, a construction engineer and former official in Crimea’s pre-annexation government, told Al Jazeera. “The palace will be lost; what they’re building is a sham.”

The ATTA Group, a company behind the restoration, specialises in contemporary architecture and uses modern materials such as steel and concrete that will inevitably destroy the fragile building, Dudakov said.

The company did not reply to requests for comment.

What has been done to the mosque already amounts to “partial loss of the building’s authenticity,” Mustafa Jemilev, a revered community leader expelled by Moscow, wrote on Facebook.

The restoration “poses a real danger of destruction” of the palace, the foreign ministry said in a statement.

The Turkic-speaking ethnic group once controlled the Great Silk Road’s westernmost branch and warred with Moscow for centuries. Crimean Tatars consider the palace the most significant symbol of their lost statehood.

A Russian army burned the palace and its gigantic library. Westernised tsars changed the rebuilt palace’s interior to make it look more European. They erased elaborate frescoes, destroyed many buildings and dramatically reduced the palace’s acreage.

The restoration is part of Kremlin’s broader campaign of pressure on the Crimean Tatar community that includes abductions, arrests, searches and sentences of up to 15 years in jail for alleged “terrorism” and membership in “radical” religious groups.

“Assimilation, erasure of historic memory are revenge for political disloyalty, for reluctance to obey,” Gulnara Bekirova, an historian and the host of television shows on ATR, a Tatar-language television network that criticised Moscow’s actions in Crimea, told Al Jazeera.

Shortly after the annexation, Moscow banned ATR and several other media outlets. It made Tatar-language kindergartens bilingual and reduced Tatar classes in public schools to two voluntary hours a week.

Such lessons “are number seven or eight on the schedule, in such conditions, one just does not attend”, political activist Seitumer Seitumerov told Al Jazeera.

He fled Crimea for mainland Ukraine after the owner of a restaurant he managed was arrested and charged with “extremism.”

Some ethnic Russians accuse Tatars of plotting to massacre the pro-Moscow population that mostly voted for Crimea’s “return to Russia” during the March 2014 “referendum”.

“If it wasn’t for the referendum, Tatars and [Ukrainians] would have cut our throats,” Alexander Topchilin, a store manager in Simferopol, Crimea’s main city, told Al Jazeera.

Anti-Tatar campaigns go hand in hand with pressure on all things Ukrainian.

It said in a statement that the policies were part of Moscow’s “ethnic genocide conducted to fully colonise the peninsula.”

Many accepted Islam, but retained cultural traits such as horticulture and sophisticated, odd-metered music.

Crimea’s cultural openness made it an important centre of Muslim culture – despite the constant pressure that forced hundreds of thousands of Tatars to leave for Ottoman Turkey.

“Following tsarist government’s policies, Crimean Tatars were forced to leave Crimea and soon turned into a minority in their only historic motherland,” historian Bekirova said. 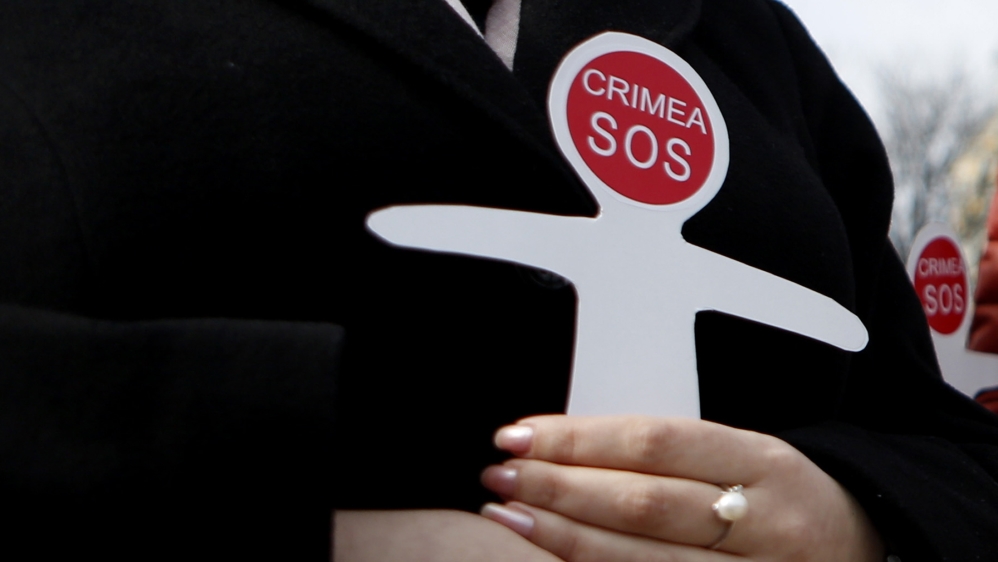 A century after the 1783 annexation, Crimea became the cradle of Jadidism, a movement for political and cultural reforms among Russian Empire’s Muslims.

Crimean Tatars used an adapted Arabic script, but under Joseph Stalin, they had to switch to a Cyrillic script, and their next generation simply could not read their pre-Soviet literature.

During anti-religious campaigns, most of the peninsula’s mosques were closed down. Jadids, who largely supported Bolsheviks, were purged and executed.

In 1944, the entire Crimean Tatar community was deported to Central Asia for alleged collaboration with Nazi Germans, and was allowed to return in the late 1980s. Half a century of exile amid a virtual ban on their language further eroded their religious and cultural identity.

The ongoing crackdown on their language follows a similar trend throughout multiethnic Russia.

Last November, the Kremlin forbade compulsory classes of Tatar, Russia’s second-most spoken language and a linguistic sibling of Crimean Tatar, following complaints from the parents of ethnic Russian students in the Volga River province of Tatarstan.

“It is inadmissible to force a person to study a language that is not their mother tongue,” Russian President Vladimir Putin said, adding that Russian “can’t be replaced with anything”.

Several other provinces with large non-Russian populations responded with similar bans, despite protest rallies and pleas signed by intellectuals and public figures.

Critics blame the trend on Kremlin’s tilt to anti-Western nationalism that began after massive protests against Putin’s third election.

Russia has turned “into a colonial ‘prison of nations’ with a hardline course to assimilate national minorities”, wrote Radjana Dugarova, an activist from the southern Siberian province of Buryatiya.

Although Mongol-speaking Buryats form a sizable minority, they also faced a ban on the compulsory teaching of their mother tongue.