Washington: US President Donald Trump on Thursday blasted as "Fake News" a report that he made a promise to a foreign leader during a phone call that a US intelligence official found troubling enough to file a whistleblower complaint. 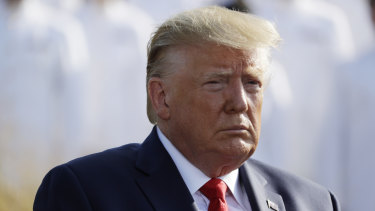 "Virtually anytime I speak on the phone to a foreign leader, I understand that there may be many people listening from various US agencies, not to mention those from the other country itself," Trump said on Twitter.

"Knowing all of this, is anybody dumb enough to believe that I would say something inappropriate with a foreign leader while on such a potentially 'heavily populated' call," he said.

"I would only do what is right anyway, and only do good for the USA!"

The Washington Post, citing two former officials familiar with the matter, said on Wednesday that Intelligence Community Inspector General Michael Atkinson determined that the complaint was credible and troubling enough to be considered a matter of "urgent concern," a threshold that requires notification of congressional committees.

The complaint was related to multiple acts, Atkinson told lawmakers during a private briefing, two officials familiar with it said, according to the New York Times. But Atkinson declined to discuss specifics, including whether the complaint involved the president, according to committee members.

House of Representatives Intelligence Committee Chairman Adam Schiff, a Democrat, issued a subpoena to Maguire last week in an attempt to force him to disclose the complaint.

In announcing the subpoena on Friday, Schiff said Maguire's refusal to give the complaint to lawmakers raised "serious concerns about whether White House, Department of Justice or other executive branch officials are trying to prevent a legitimate whistleblower complaint from reaching its intended recipient, the Congress, in order to cover up serious misconduct."

Maguire's office did not immediately respond to a request for comment.

A congressional source told Reuters on Thursday that the complaint was filed with the inspector general on August 12. The source said it seemed unlikely to have been filed by someone at the Central Intelligence Agency, because the CIA has its own inspector general.

Two congressional sources said the Senate Intelligence Committee had not been fully briefed on the complaint.

Schiff's panel was meeting with Atkinson in closed session on Thursday to discuss the matter. The New York Times, citing two people familiar with the briefing, said he was declining to disclose the contents of the complaint.

Maguire is scheduled to testify to the House panel next week.