Iranian state television acknowledged for the first time Tuesday that security forces shot and killed what it described as "rioters" in last month's anti-government demonstrations – the deadliest political unrest in Iran since the 1979 revolution and the subsequent founding of the Islamic republic.

The report, however, did not provide any details about the death toll. Amnesty International has documented at least 208 deaths in the crackdown, though the London-based human rights group expects the real figure to be higher.

The protests erupted on November 15 and were quickly met with an internet shutdown and reprisal by security forces, according to human rights groups and witness reports that have trickled out since internet service was restored about a week later. 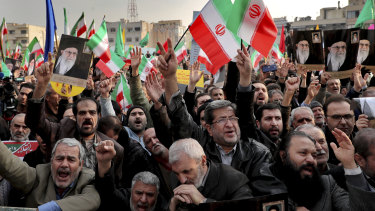 "We've seen over 200 people killed in a very swift time, in under a week," Mansoureh Mills, an Iran researcher at Amnesty, told the Associated Press. She described the deadly crackdown as "something pretty unprecedented" even in a country frequently criticised over its human rights record.

As the unrest unfolded, Iranian media was barred from reporting on the events or state violence.

The state TV report on Tuesday alleged that those killed by security forces were "rioters who have attacked sensitive or military centres with firearms or knives, or have taken hostages in some areas," according to the AP's translation. The report acknowledged that passersby, security forces and peaceful protesters also were among the dead, though it did not specify who was responsible for these deaths.

The report did provide some details about confrontations in the southwestern city of Mahshahr, where it said security forces clashed with a "separatist group" armed with "semi-heavy weapons." Mahshahr is in Iran's oil-rich Khuzestan province, an area with a large ethnic Arab population and a history of unrest over alleged state discrimination.

"For hours, armed rioters had waged an armed struggle," the TV report said, according to the AP. "In such circumstances, security forces took action to save the lives of Mahshahr's people."

Reporting by the New York Times and BBC Persian of killings in Mahshahr, however, directly contradicts this narrative.

Times reporters Farnaz Fassihi and Rick Gladstone spoke with six Mahshahr residents, who described how protesters gained control over much of the city in the initial upheaval. After three days, however, the feared Revolutionary Guard Corps moved in.

A road is blocked by protesters in the capital, Tehran, in mid-November. Credit:ISNA

"When the Guards arrived near the entrance to a suburb, Shahrak Chamran, populated by low-income members of Iran's ethnic Arab minority, they immediately shot without warning at dozens of men blocking the intersection, killing several on the spot, according to the residents interviewed by phone," the Times reported. "The residents said the other protesters scrambled to a nearby marsh, and that one of them, apparently armed with an AK-47, fired back. The Guards immediately encircled the men and responded with machine gun fire, killing as many as 100 people, the residents said."

In the Tuesday report, state TV also acknowledged clashes with "rioters" in the capital, Tehran; Shahriar, a Tehran suburb; and other cities, including Shiraz.

In a statement Monday, Amnesty reported that "dozens of the deaths have been recorded in Shahriar," which it described as "one of the cities with the highest death tolls."

The group also reported that authorities have warned families of victims against speaking to the media or holding funerals, while other families have had to pay for the return of bodies from the morgue.

A midnight announcement last month that the government was cutting fuel subsidies in half sparked the unrest, which at first appeared directed at economic grievances. Iran's economy and its people have been hit hard since the United States pulled out of the 2015 nuclear agreement between Iran and world powers and renewed stifling sanctions in 2018.

But the protests quickly expanded in scope amid anger over government corruption, failing institutions, lack of freedoms and the repressive rule of Iran's supreme leader, Ayatollah Ali Khamenei. The demonstrations reportedly were large in cities and areas populated by low-income and working-class Iranians, which is notable as these groups are the power base of the post-revolution ruling elite.

Interior Minister Abdolreza Rahmani Fazli previously told state media that protests broke out in 29 of Iran's 31 provinces. He also said that 50 military bases were attacked, as well as hundreds of banks, religious centres, gas stations and police cars, among other targets.

Also on Tuesday, President Donald Trump referenced the unrest in Iran in a somewhat anachronistic statement from London, where he's attending a NATO summit.

"Iran is killing perhaps thousands and thousands of people right now as we speak. That is why they cut off the internet, so people can't see what is going on," he said, citing no source for his numbers. "Not just small numbers which are bad, big numbers which are really bad, and really big numbers… It is a terrible thing, and the world has to be watching."

Iranian anti-government activists have criticised Trump for reneging on the nuclear agreement and renewing sanctions, which they've denounced as punitive collective punishment of the Iranian people rather than a move aimed, as the Trump administration claims, at promoting democracy in Iran.