G4S security guard who acted as ‘inside man’ to help machete gang steal £165,000 from bank is jailed for 20 years after he was caught following ‘schoolboy errors’ 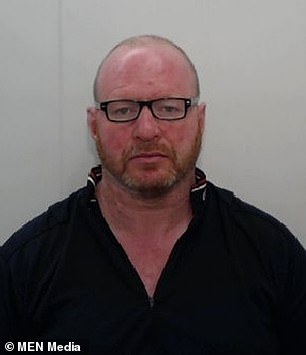 Thomas Keane, 52, in custody after his arrest and has been convicted of being the ‘inside man’ in the robbery gang’s three armed raids

CCTV has captured two terrifying raids carried out by a robbery gang who were helped by an inside man – and the moment their getaway car crashed, leaving police with crucial clues to their identities.

The footage shows the Salford-based thugs brandishing machetes, and sparks flying from an angle grinder as they use it to break into an ATM in one bank.

But their crime spree started to unravel when they crashed a Ford Focus in the picturesque village of Ramsbottom moments after one raid.

Now a G4S security guard who was the ‘inside man’ in the gang’s three armed bank raids across Greater Manchester has been jailed for 20 years.

Thomas Keane, 52, had denied any involvement in raids at two Santander branches and a NatWest, but was convicted of conspiracy to commit robbery by a jury at Manchester Crown Court.

His information enabled a Salford-based robbery gang to escape with £165,000.

Sentencing Keane to 20 years on Friday, Judge Anthony Cross QC told the gang: ‘Each of the defendants played their part in the conspiracy, which when executed struck fear into the hearts and minds of your victims. 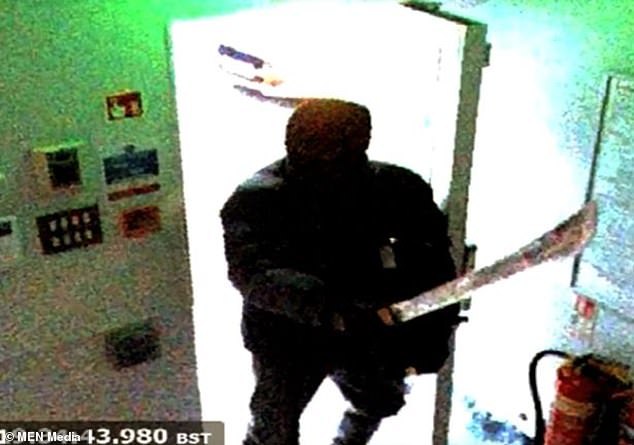 ‘This crime is to be marked by long custodial sentences, of the type reserved for crime carried out by professional criminals. Essential to the crime was the intelligence provided by you Keane.

‘You knew full well that when you struck there was members of the public present.

‘You intruded in the lives of ordinary members of the public. They were doing no more than enjoying a stroll in the streets of Ramsbottom, or enjoying a meal in a restaurant.

‘Your victims were left in no uncertain terms that if they didn’t do what you required, then violence would follow.

‘When threats were made, they were not empty threats.’

The three raids were at Santander banks in Walkden and Ramsbottom and a NatWest branch in Manchester, but the method was the same.

The guard making the delivery of cash was targeted as they walked between the G4S vehicle and the premises. 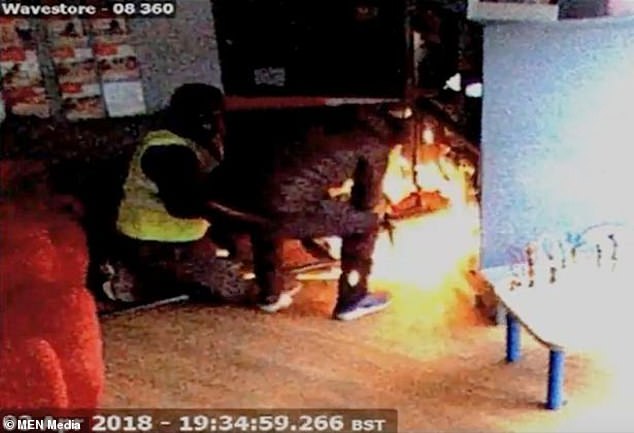 Footage of the robbers using an angle grinder to break into an ATM inside Santander in Ramsbottom on April 3, 2018 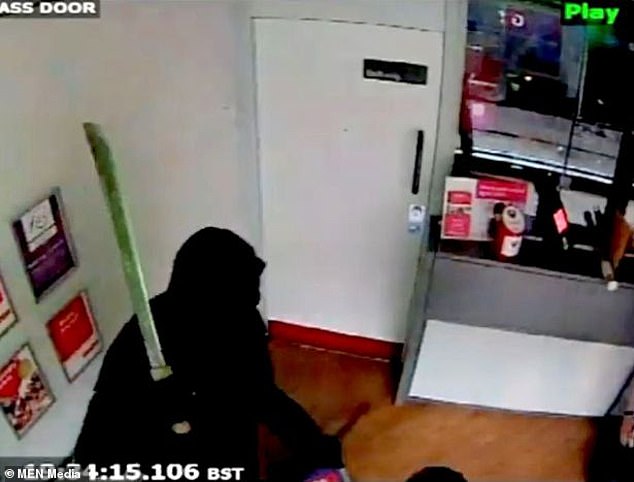 CCTV footage of the armed robbery at Santander bank in Ramsbottom on April 3, 2018

Once the guard was grabbed, the gang used equipment, including an angle grinder, to break into ATMs inside the bank. Keane, from Leigh, was central to the gang’s first strike in the early hours of September 7, 2017.

He was one of two guards delivering to the Santander bank in the Ellesmere Centre in Walkden.

Three masked men pounced from a red Mini Cooper and ambushed Keane, tailgating him into the bank at 1.20am.

He slowed down a little as they grabbed him – ‘a bit of theatre’ said a senior police officer – to make it look like he was not involved.

Armed with a machete and a gun the raiders escaped with £125,000 and left a second guard traumatised. 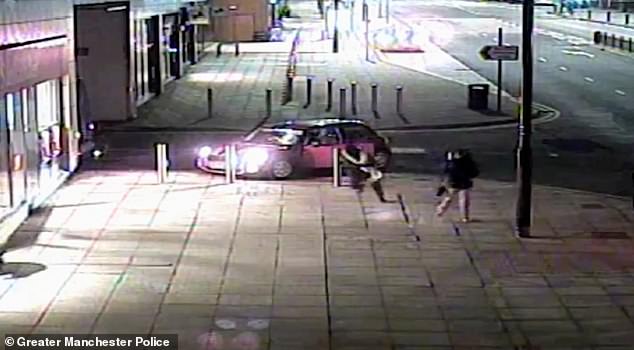 Prosecuting during the trial, Jeremy Lasker said: ‘During the first robbery in Walkden, a robber told a terrified G4S guard ‘Get down on the floor or Iwill put a f****** hole in you.”

The next raid was on March 25, 2018, at 8.10am at the NatWest in Claremont Road, Moss Side. Keane was again a guard, but it went wrong and was aborted.

The third raid was in Ramsbottom, a week later on April 3.

Keane was not one of the guards but had provided the intelligence earlier in the day of where and when the robbers should hit. He had phoned the leader of the robbery gang one minute after clocking off work at the G4S depot in Prestwich with the information. 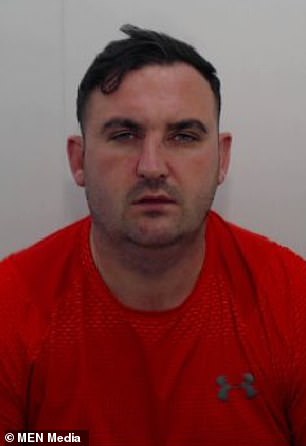 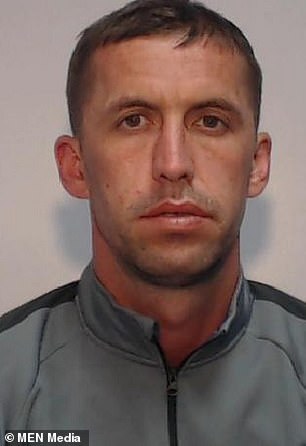 Jack Pennington (left), who was the leader of the Salford robbery gang, and Neil Callaghan (right) who was a member

This time they escaped with £40,000. But their Ford Focus getaway vehicle crashed into a Range Rover on Bolton Road.

Four offenders ran from the Focus, leaving crucial clues to their identity in their wake. The judge said the first robbery ‘whetted your appetite to obtain more, such was your greed’.

He said the raid in Ramsbottom demonstrated Keane’s ‘revulsion and contempt for his co-workers’.

The judge said: ‘It’s quite plain that as his co-worker was looking at the detail of his shift, Thomas Keane at that time was plotting the robbery. 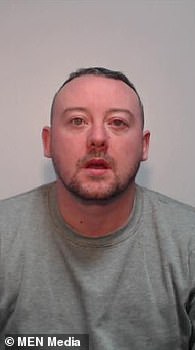 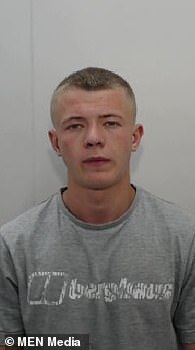 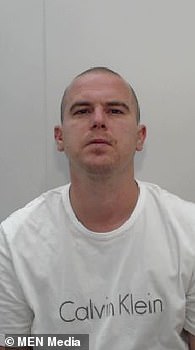 Left to right: Scott Holmes, Lucas Dodd, David Oxton were all members of the gang and have all been jailed

‘While leaving his place of work, the absolute betrayal of his co-worker was practised, by making a telephone call to Pennington.’

Sentencing Keane, he added: ‘Your offending displays a complete betrayal of friends and colleagues. It’s a breach of trust and you have demonstrated absolutely no remorse at all for your behaviour.

‘While the prosecution case was being outlined, the judge said the robbers had made a ‘number of schoolboy errors’ which ultimately led them to being caught.’

Det Sgt Rick Castley told the court: ‘We had a number of members of the public who witnessed the four dispersing, without whom we would not have solved this job.

‘One witness rang up to say he saw two people hiding under a car. They then saw a Europa van turn up to collect them – that was Jack Pennington arriving in the van.’

After the crash, Pennington had been telephoned by one of the robbers, Luke Dodd, asking him to pick them up. Pennington drove from Salford to Ramsbottom to collect them, but fingerprints from the car they were hiding under meant police were able to identify Dodd and David Oxton. 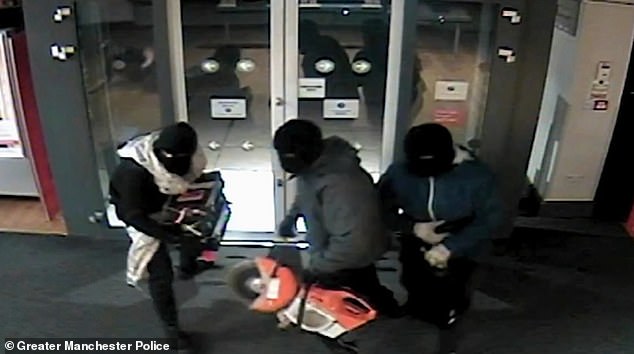 The three raids were at Santander banks in Walkden and Ramsbottom and a NatWest branch in Manchester, but the method was the same

The van Pennington arrived in was registered to his father and was traced.

Another of the gang, Neil Callaghan, had a distinctive tattoo on the back of his neck bearing a name and date of birth, which was seen by a witness as he fled through a park. Further forensic evidence to link him was gleaned from a coat which he threw away.

An axe found in the crashed getaway car contained Scott Holmes’ DNA. Operation Riptide, set up to investigate the robbery spree, identified phone numbers for some of the gang and established a link between Jack Pennington, the gang leader, and Keane.

DS Castley added: ‘We don’t think Pennington was a robber – he was above it. We don’t know how Pennington recruited Keane. Keane went no comment on interview, as did Pennington. They have not enlightened us as to how that relationship developed.’

During his trial, Keane, who began working for G4S in 2008 and earned about £32,000 a year, denied any involvement with the robberies.

He explained his contact with Jack Pennington, the leader of the robbery gang, was a result of his decision to start smoking cannabis.

He told the jury he met Pennington at a friend’s 60th birthday party in May 2017 and that it was made clear ‘that if I wanted anything he could get it’.

Police believe, several other men, as yet unidentified, were involved in the Walkden raid.

Defending, David Bentley said there is a ‘different side’ to Pennington, who he described as a ‘family man’. 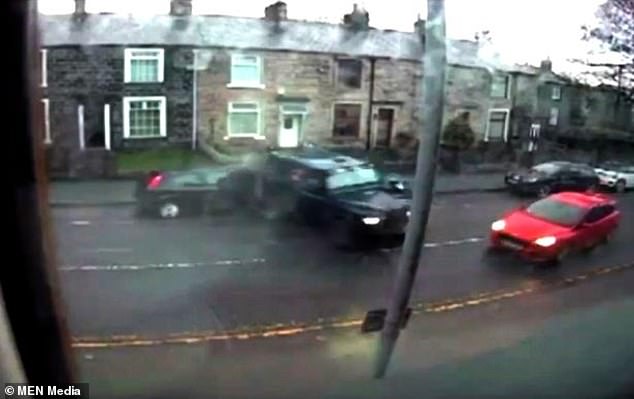 The getaway car (red Ford Focus) and a Range Rover crash on Bolton Road after the robbery at Santander in Ramsbottom on April 3, 2018

Mark Rhind said that Keane’s stance ‘has not changed’ since he was convicted of the robbery conspiracy after a trial.

Mr Rhind said Keane, a married father, must have received some financial reward, but said there was no evidence of a lavish lifestyle. Keane’s wife is standing by him and will wait for him to be released, the court heard.

Andrew Smith, for Oxton, said this marked a ‘step beyond’ his previous criminality.

Callaghan’s barrister Michael James described his client as a ‘footsoldier’ who was recruited into the plot in order to pay off drug debts.

Dodd’s barrister described the defendant as ‘gullible’, and said he is genuinely remorseful.

Keith Harrison said that a ‘number of sad matters’ had led to Holmes becoming involved in the robbery gang, including the death of a close friend in a car crash, his partner leaving him and losing his job.