Photographer Robert Frank, one of the most influential photographers of the 20th century best known for his book The Americans, has passed away at the age of 94.

Frank died on Monday September 9 at a hospital in Inverness, on Cape Breton Island in Nova Scotia, according to his wife, June Leaf. The couple split their time between Nova Scotia and New York.

His death was confirmed by his longtime friend and gallerist Peter MacGill, though he did not cite a specific cause.

The Swiss-born artist rose to prominence with his photography book The Americans, published in 1959. The collection of striking black and white photographs captured the myth of prosperity and the bleak reality of postwar America.

The book, though initially ill-received, has been praised for vividly capturing the US through the eyes of a foreigner and Frank is hailed as one of the most important visual artists of the 20th century.

In addition to his photography, Frank was a prolific filmmaker, creating more than 30 movies and videos, including a cult favorite about the Beats and a graphic, censored documentary of the Rolling Stones’ 1972 tour. 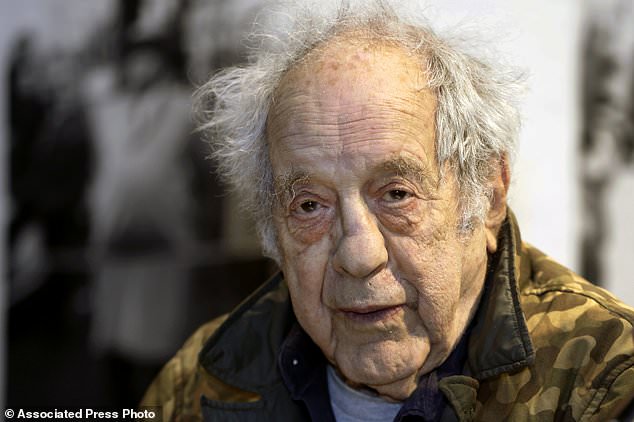 Robert Frank, the photography and filmmaking giant best known for his book The Americans which captured the candid moments of the 1950s, has passed away at the age of 94. Pictured in January 2016 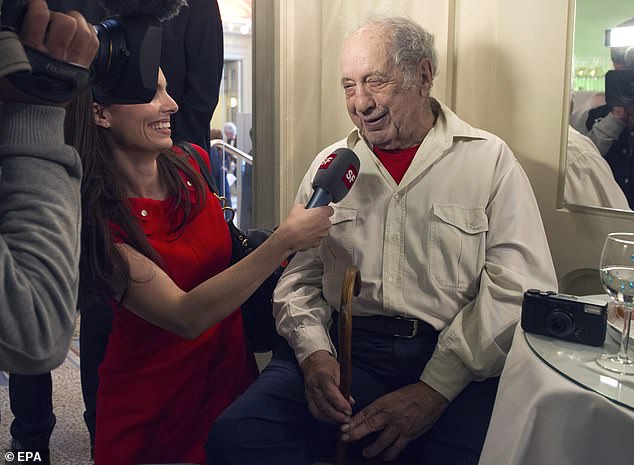 ‘Robert Frank changed the way we see,’ Mark Lubell, executive director of the International Center of Photography, said. Frank pictured above in 2012 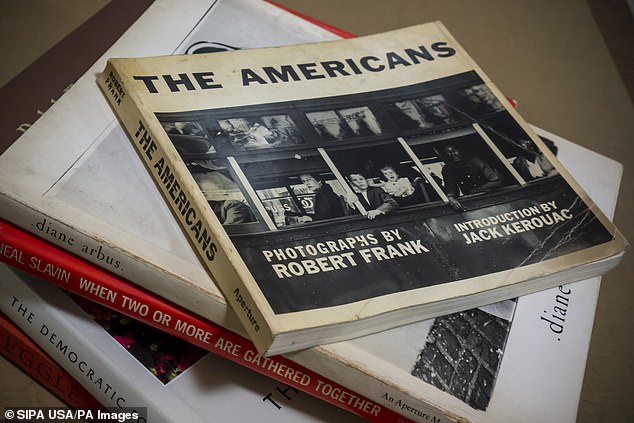 He was best known for his photography book The Americans, which captured bleak and dark candid moments of postwar USA during the 1950s

Frank was born in Switzerland in 1924 into a wealthy Jewish family during WWII.

Though spared from the worst of the Nazis, the war left a lasting impression of human tragedy on Frank’s life.

After years of working in photography studios, he emigrated to New York in 1947.

He started out as a fashion photographer for Harper’s Bazaar and became friends with Willem de Kooning, Jack Kerouac, and Allen Ginsberg, among others, who would go on to become major Beat Generation icons.

Frank was a shy, sad-eyed man who openly, and gruffly, preferred being the storyteller and not the subject.

‘He has by turns been described by people who do not know him as ornery, reclusive, hard, manipulative to the point of destructive, and cold as a bowling ball. He rarely gives interviews,’ Vanity Fair reported in 2008. ‘He speaks in short, elliptical snatches and views life with the detached outlook of an undertaker.’

His photographs are described as deadpan and unconventionally cropped and evoke the feeling of someone standing on the outside, intently looking on.

‘The more distressing new quality in Frank’s pictures was their equivocating indirection, their reluctance to state clearly and simply either their subject or their moral,’ John Szarkowski, a former head of the Museum of Modern Art’s photography collection, wrote in 1989.

After meeting Edward Steichen, then director of the Museum of Modern Art, he was included in a 1951 group exhibition at the museum, ’51 American Photographers.’

In the early ’60s, the Art Institute of Chicago presented a solo exhibition of Frank’s work, and MoMA again featured him in a show in 1952. The first retrospective of his work was in 1974 in Switzerland at the Kunsthaus Zurich.

In his famed photography book The Americans he drove across the U.S. in a used Ford, snapping away and creating a collection of postwar America from 1955 to 1957.

While most photographers of the time focused on the optimism and prosperity of the 1950s, Frank, armed with his Leica, captured the dark, bleaker parts of the nation in 83 poignant black and white photographs, culled from over 27,000 snapshots.

‘Robert Frank changed the way we see. When ‘The Americans’ came out, America was on the rise. America had won the war. But he saw something different, things that were not as rosy a picture as Life magazine might have had it,’ Mark Lubell, executive director of the International Center of Photography, said. 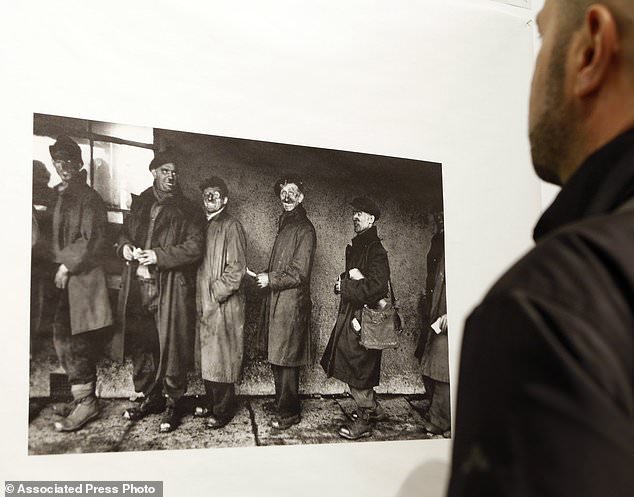 A man looks at a photograph by Robert Frank at the opening of the exhibition featuring Frank’s work, ‘Robert Frank: Books and Films, 1947-2016’ at New York University’s Tisch School of the Arts in New York in 2016 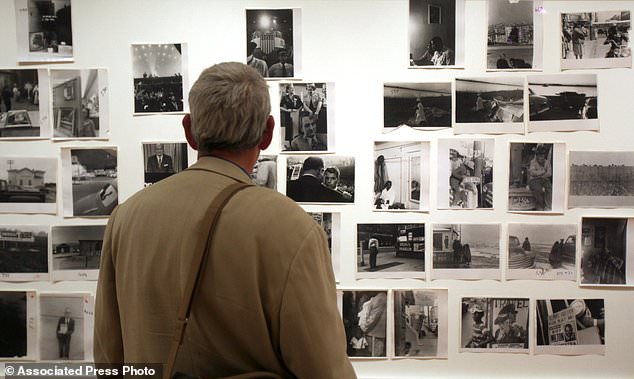 A man looks at prints from the Looking In: Robert Frank’s ‘The Americans’ exhibit at the Museum of Modern Art in San Francisco in 2009

The Americans, though now considered one of the most important photography books published since WWII, was not initially well received.

Frank struggled to find a publisher for the book at first which depicted American life as bleak, dark and unhappy.

Some snapshots included black and white passengers gazing out of a racially segregated trolley in New Orleans, a tuba player at a political rally in Chicago with his face hidden behind his instrument, and two women looking solemnly out of a brick building with their faces obscured by an American flag.

Another image, entitled ‘Indianapolis, 1956’, shows a black couple with serious faces sitting on their motorcycles staring at nothing while surrounded by a crowd.

Eventually The Americans was picked up and published by Grove Press – which had a history of releasing taboo-breaking works.

The introduction was by On the Road novelist Jack Kerouac, who directly addressed his subject: ‘To Robert Frank I now give you this message: You got eyes.’

‘The humor, the sadness, the EVERYTHING-ness and American-ness of these pictures!’ he added.

Frank said he was inspired to make the trip by photographer Walker Evans, who helped him land a Guggenheim Fellowship that financed the adventure. Evans was famous for his stark pictures from the 1930s that helped define the country during the Great Depression.

‘When you are an artist you are influenced by, you know, by the cars outside, by a painting, by literature, by Walker Evans,’ Frank told Art in America magazine back in 1996. 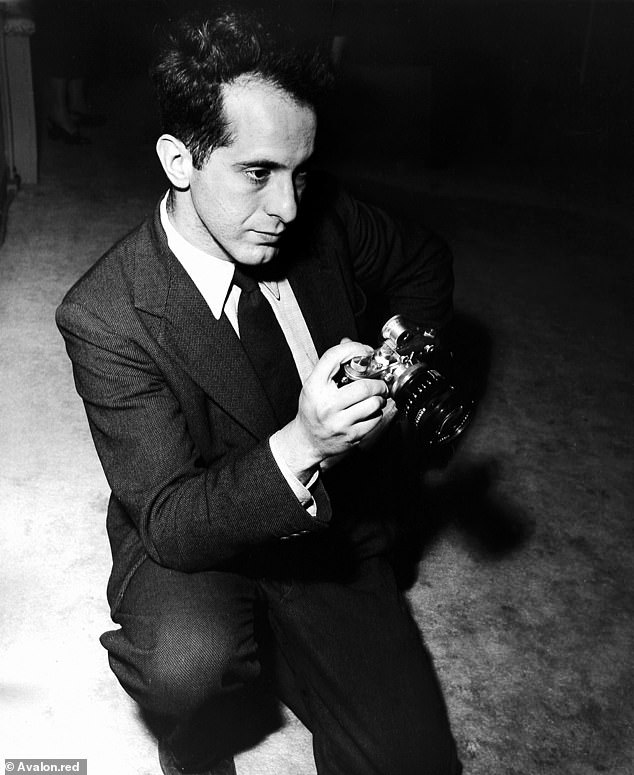 Frank was born in Switzerland in 1924 into a wealthy Jewish family and emigrated to New York to pursue photography in 1947. Young Frank pictured above in 1954 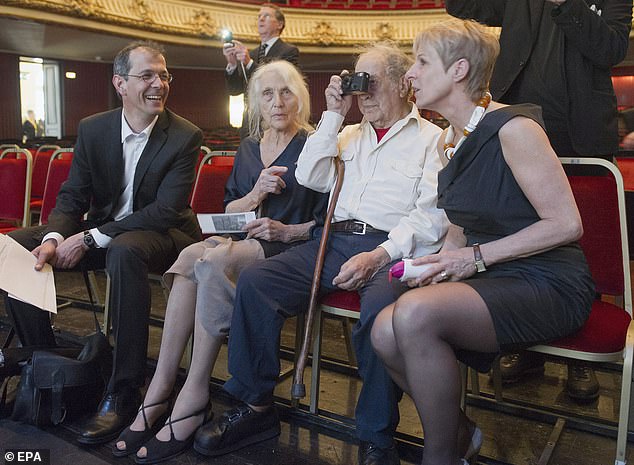 His work has come back into the spotlight time and time again.

A new edition of the book was released in 2008 by the famous German photo book publisher Steidl to mark The Americans’ 50th anniversary.

Exhibitions on the occasion were held in 2009 at the National Gallery of Art in Washington, D.C., the San Francisco Museum of Modern Art and the Metropolitan Museum of Art.

Frank boasted a number of accolades for his work including the 2000 Cornell Capa Award from the International Center for Photography in New York and the 1996 Hasselblad Foundation’s International Photography.

His life was also the inspiration for the 2015 documentary ‘Don’t Blink – Robert Frank’ by Laura Israel.

Thirteen years after the publication of The Americans in the United States, Frank produced another critically acclaimed book of autobiographic images titled The Lines of My Hand. His other books included Paris and Black, White and Things.

The harsh reaction to The Americans soured Frank on photography for a time and led him to movies, including the 1959 short Pull My Daisy and the notorious Rolling Stones documentary Cocksucker Blues. 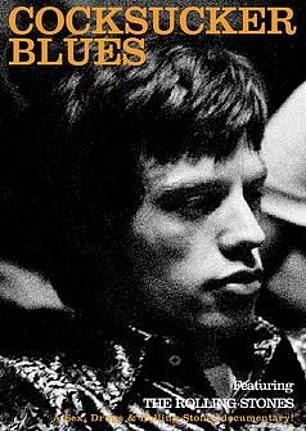 The harsh reaction to The Americans soured Frank on photography for a time and led him to movies, including the 1959 short Pull My Daisy and the notorious Rolling Stones documentary Cocksucker Blues

Both the Stones movie and Pull My Daisy, based on a Kerouac play and featuring fellow Beats Allen Ginsberg and Gregory Corso, featured prearranged scenes shot in a style that made the action appear spontaneous.

Admirers of his work, the Stones granted Frank and his crew remarkable access to a tour known for unlimited offstage excess.

Partly in color, partly in black and white, Frank filmed the band and its entourage in a haze of snorting cocaine and shooting heroin on a private jet. The film had the intimate, off-hand look of a home movie: Keith Richards was captured removing a television set from his hotel room and tossing it over the balcony and a groupie was seen lying naked on a bed, fondling herself.

Appreciation of Frank’s artistry was soon overwhelmed by fears of imminent arrest.

The Rolling Stones sued Frank to prevent him from releasing the documentary and Frank acknowledged that scenes on the jet had been staged. A court order allowed the film to be shown only a few times a year and only in Frank’s presence. Substantial portions of the movie have turned up on the internet, and a section of Don DeLillo’s epic novel Underworld was named for Frank’s documentary.

‘Coke sniffing backstage or in the tunnels and people sitting around a room or sleeping on a plane, that edge-of-time feeling,’ DeLillo wrote. ‘Interviews mumbled and blotted, the simplest of earnest rehearsed queries lost and pondered and lost again … The endless noisy boredom of the tour.’