Jakarta: Indonesian plantation companies fined for burning huge areas of land since 2009 have failed to pay hundreds of millions of dollars in penalties meant to hold them accountable for actions that took a devastating environmental and human toll.

The palm oil and pulp wood companies involved in fires owe more than $US220 million ($309.5 million) in fines and the figure for unpaid penalties for environmental destruction swells to $US1.3 billion when an illegal logging case from 2013 is included, according to separate summaries of the cases compiled by Greenpeace and the Ministry of Environment and Forestry. 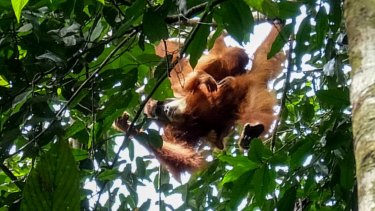 A mother orangutan with her baby in Sumatra’s Gunung Leuser National Park in 2014.Credit:Penny Stephens

When the Supreme Court rejected Kallista Alam's judicial review, the company appeared to have exhausted all its legal options.

But it avoided payment by getting a legal protection order last year from the Meulaboh district court in Aceh which is responsible for enforcing the fine, according to a ministry document that details the court's numerous instances of apparent non-cooperation in the case. The ministry said it has appealed the order to the Supreme Court.

Activists who said they'd gathered 200,000 signatures on a petition against Kallista Alam protested outside the Meulaboh court in January, media in Aceh reported. Kallista Alam couldn't be a contacted. The phone number listed for it in an online companies database is inactive.

Sani, the environment ministry official, said in seven cases enforcement of fines is held up because the local courts responsible for enforcement and the companies involved haven't received copies of final rulings. 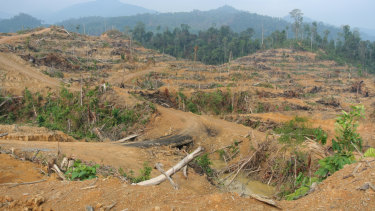 "The Ministry of Environment and Forestry is consistent in making efforts in environmental law enforcement, including forest and land fires, by filing lawsuits in civil, criminal and administrative courts," he said.

In a case from 2014, the ministry sought a 7.8 trillion rupiah fine for fires on 20,000 hectares of land controlled by Bumi Mekar Hijau, a pulp wood company that is part of Indonesia’s Sinar Mas conglomerate.

A provincial court in 2016 imposed a far smaller than demanded fine of 78 billion rupiah, but it remains unpaid.

A spokeswoman for the Asia Pulp & Paper arm of Sinar Mas, owned by one of Asia's richest families, said a director dealing with the case was on sick leave and couldn't immediately respond.

"As citizens, if we don't pay our taxes we get sent to prison," said Rompas, the Greenpeace campaigner. "So why aren't the owners of these big companies being forced to pay what they owe or sent to prison if they don't pay?"