The determination of Indigenous students studying in Melbourne has propelled the school that supports them from strength to strength.

Founded six years ago Melbourne Indigenous Transition School (MITS) helps students moving from remote Victoria and the Northern Territory to attend school in the city. It runs a boarding program and its own year-seven campus in Richmond and supports students moving to one of 12 government and private partner schools from year eight onwards.

Places at the school, which has been steadily growing and currently has 82 students, are in high demand. 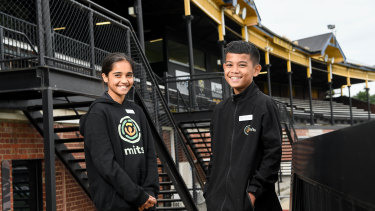 Its growth will continue this year after the federal government announced $10 million in funding to build a new Richmond boarding house.

“The house will be built over three levels with boarding facilities for up to 40 boys, meaning 40 young Indigenous students will be given the chance to live, learn and thrive in a culturally safe space,” Treasurer Josh Frydenberg said.

“This project will provide opportunity to generations of Indigenous students for years to come.”

MITS executive director Edward Tudor said the school was led by its students and their families and communities and its success was down to them.

“They’re the ones that do the hard work and take on the challenge,” he said.

Samantha Rioli, the school’s Pathways co-ordinator, said the plan for a new boarding house was directly responding to students’ needs.

“Going to school – it can be a culture shock for them, it’s different, they are in a minority group,” she said.

“They want to be able to finish the day after a sometimes overwhelming day and to be able to come to a culturally safe space with their sisters and brothers and peers and be able to relax and talk about school and share. It’s important for them to build that resilience for their future.”

She said eight of MITS’ 12 partner schools now have Indigenous liaison officers on staff to help students and work with the school to make it a safe place for them.

While homesickness is palpable when students first arrive, Ms Rioli said they were surrounded by a supportive community.

“They’ll always be connected to country. Their culture is embedded, it will always be there,” she said.

The students’ adaptability was on show again during the coronavirus crisis in 2020. To avoid remote learning, which would have put too many children at risk of disengaging from study, MITS moved its staff and students to a hub in Darwin.

“The kids did extraordinarily well, considering everything,” Mr Tudor said.

Comedian Hamish Blake hosts MITS’ annual gala dinner and urged people to donate to the organisation after the effects of the pandemic. Half of the school’s funding comes from government sources while the other 50 per cent is donations.

“The program of course runs with the full support of the families and communities the kids come from and it’s a really beautiful thing to see,” he wrote on Instagram.

“I can’t tell you how infectious the happiness of the MITS kids is.”