Incredible moment a COVID-19 patient is pulled from the brink of death with a jolt: Photo series captures brutal reality of life on a New York ER ward during the global pandemic

This is the incredible moment a team of nurses and doctors at Saint Joseph’s Medical Center, in Yonkers, New York, miraculously saved a Covid-19 patient from the brink of death.

A nurse furiously pushes down on a man’s chest as five other staff in full protective gear surround the patient’s bed.

Suddenly, one throws up his arms and steps backward.

‘OK, move! Everybody move!’ are the instructions.

Moments after they back away, the patient’s heart is shocked, his arm spasms and he shakes on the bed. Soon after, he is placed on a ventilator. He has been saved – for now. 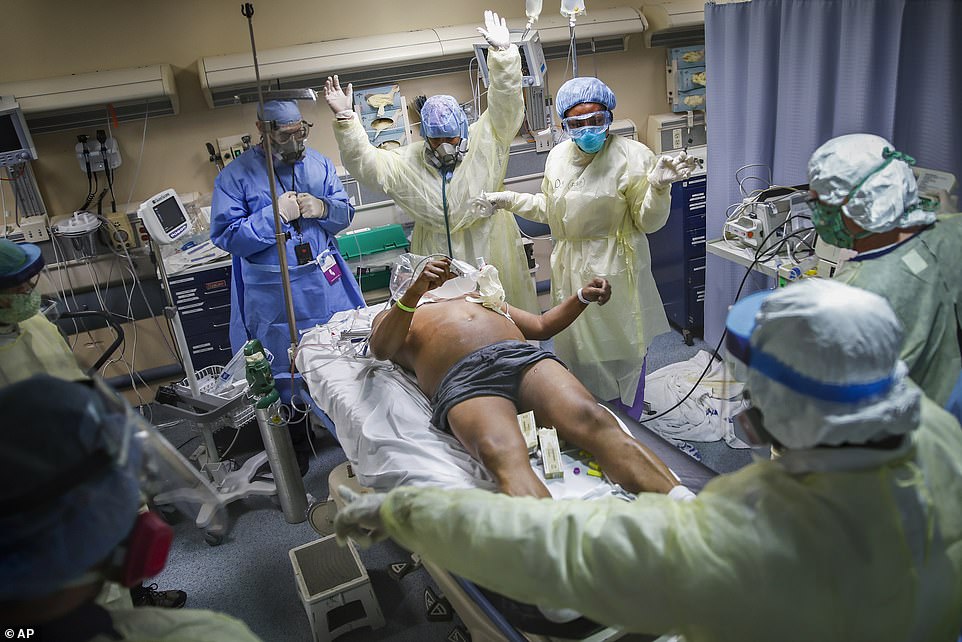 The incredible moment a Covid-19 patient is pulled back from the brink of death after having his heart shocked by the dedicated, hard-working medical staff at Saint Joseph’s Medical Center, in Yonkers, New York 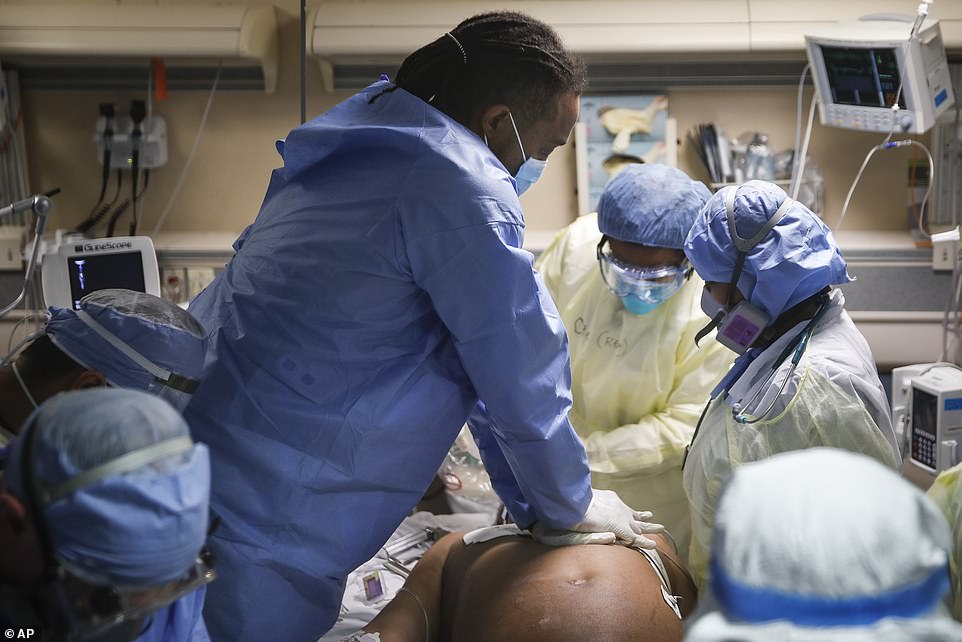 Some moments before his revival, a Saint Joseph’s Medical Center nurse can be seen furiously pumping his heart, trying to shock him back to life, as her colleagues rush to surround the dying man 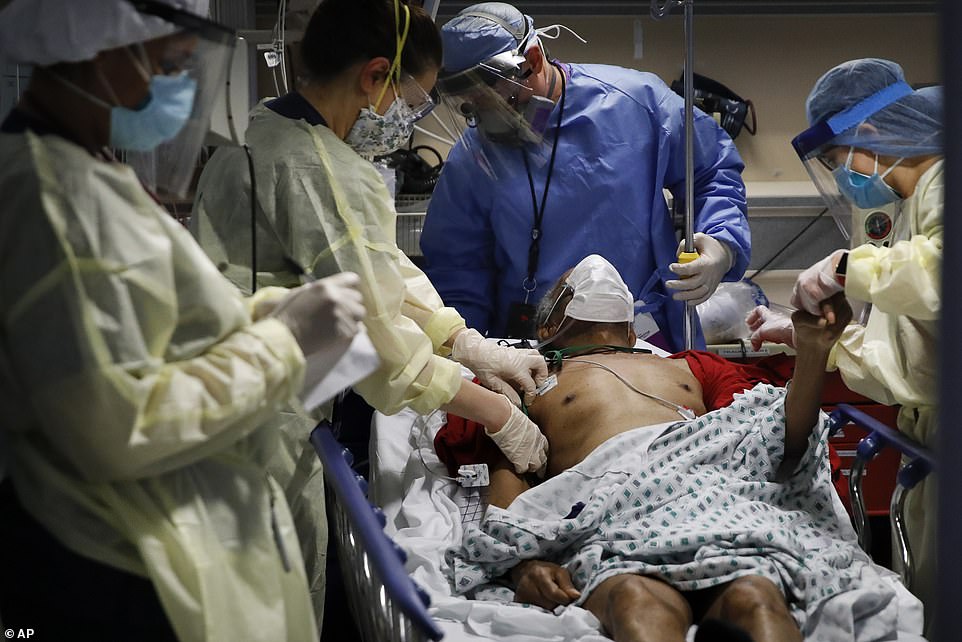 The nursing home patient (pictured) was brought into Saint Joseph’s Medical Center, in Yonkers, on Monday, having showed symptoms he had the deadly coronavirus

Many more at Saint Joseph’s Medical Center, Yonkers, New York, have not.

‘It’s been a nightmare. We have a volume of sick people like you can’t believe. In one shift, I pronounced six people dead,’ said Dr. Anthony Leno, the hospital’s director of emergency medicine, who on average pronounces one dead in a 10-12 hour shift.

The Yonkers hospital, which sits near the Bronx border and serves one of the poorest sections of Westchester County’s largest city, has been besieged by the new coronavirus.

Half of the approximately 280 staff members who were tested for the disease were positive – with another 25 to 30 still awaiting results, according to Dean Civitello, the vice president for human resources. 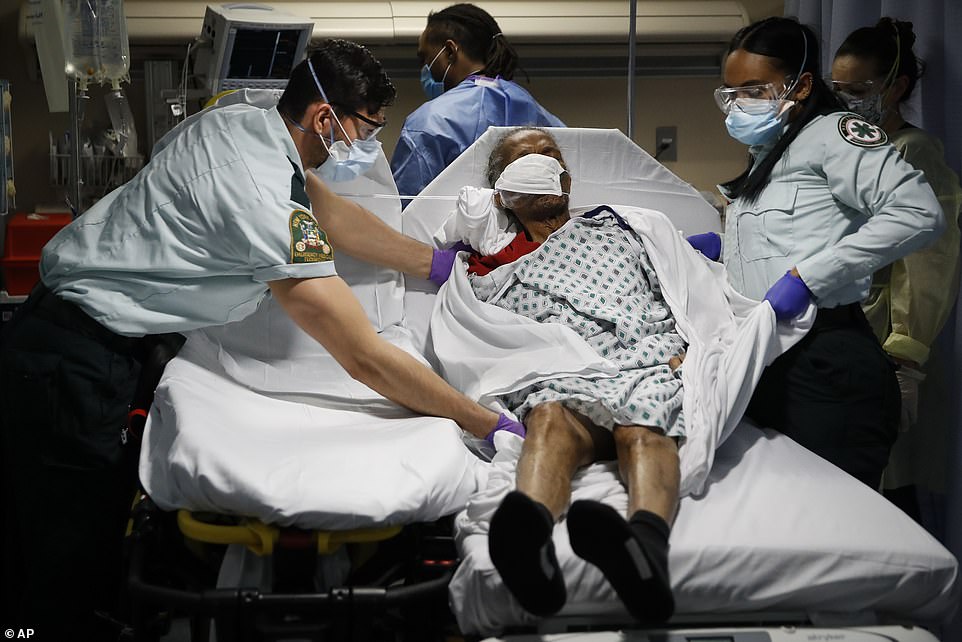 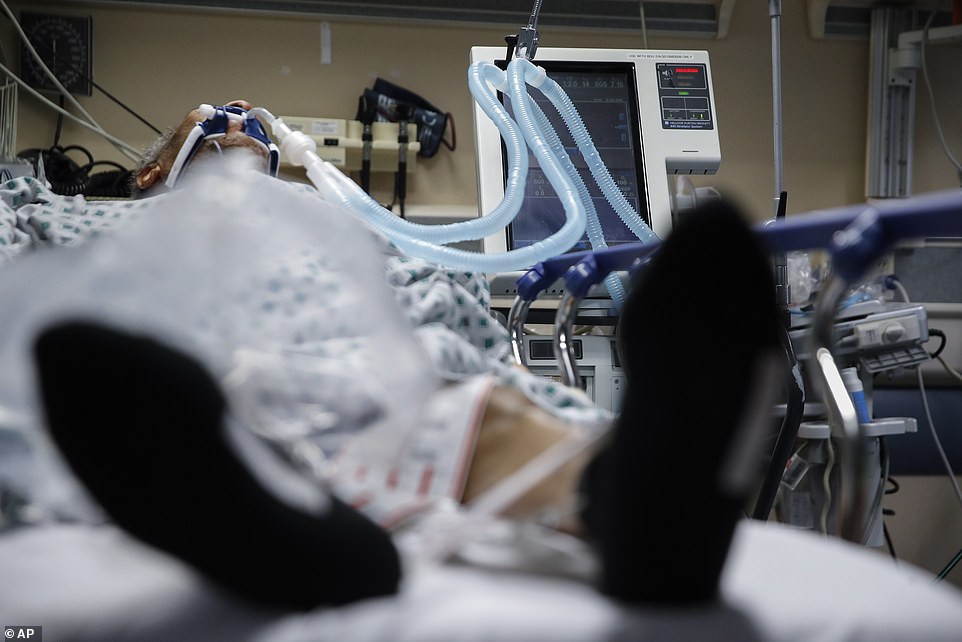 A complex ventilator system is seen here hooked up to the suffering Covid-19 patient, helping them to breathe in Saint Joseph’s emergency room

The Associated Press was granted access to the facility’s emergency room, which at one point earlier in the pandemic had 28 patients waiting to be treated and ambulances lined up outside with more, said Dr. James Neuendorf, Saint Joseph’s medical director.

Staff from other areas of the hospital were redeployed to manage patients and additional treatment areas were set up to augment the hospital’s 194 acute-care beds.

The adjustments meant ‘we were able to take care of a large number of patients – well over above our numbers that we normally see on a daily basis,’ Neuendorf said. 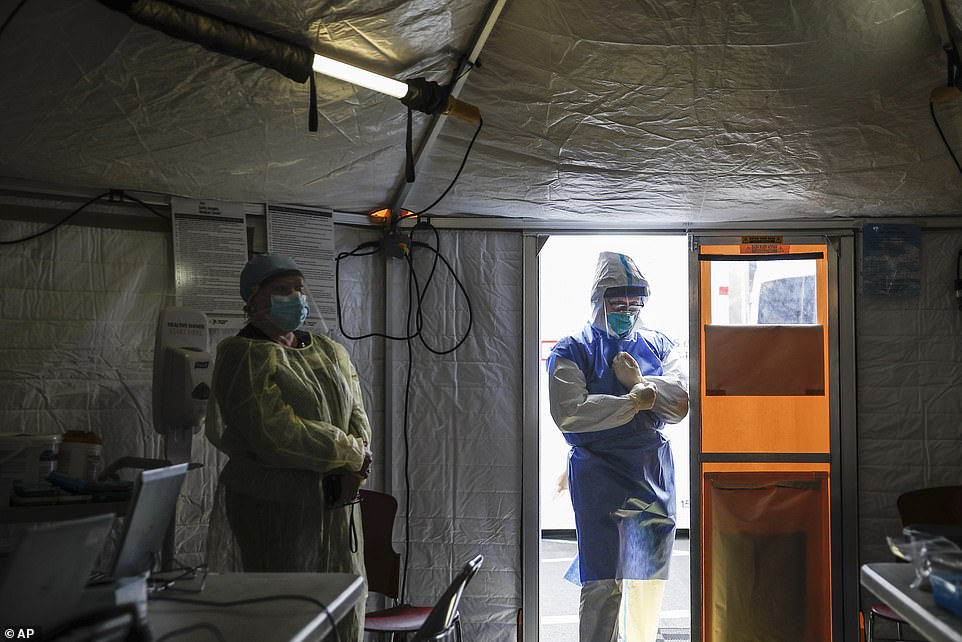 A Covid-19 triage and testing tent set up at Saint Joseph’s Medical Center in Yonkers. Pictured: a radiology/cardiology administrator making some final checks to his personal protective equipment (PPE) 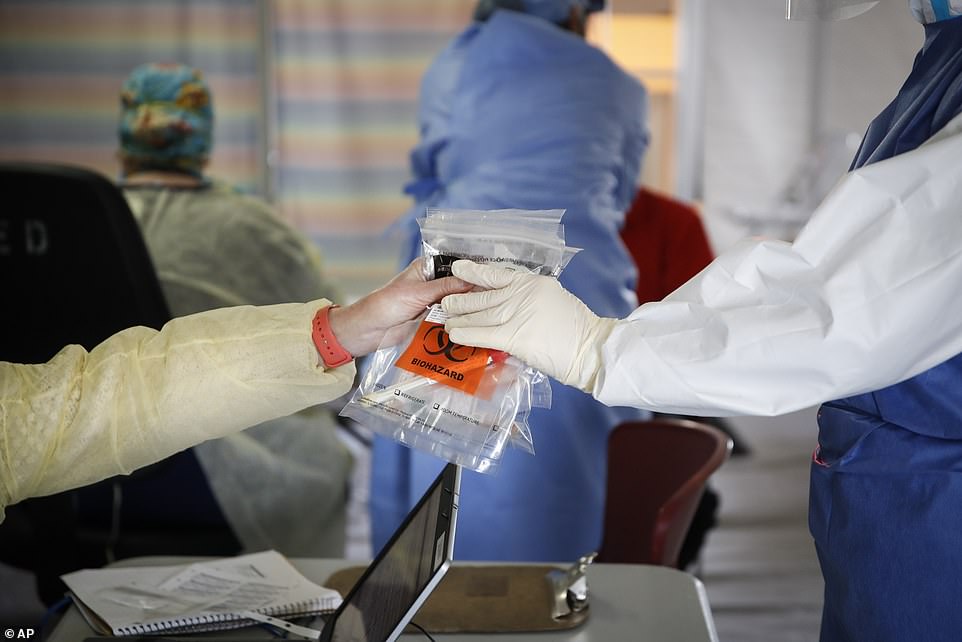 Pictured: a batch of orange-colored, biohazard-marked, sample baggies bound for the Covid-19 triage and testing tent at St Joseph’s

More than 900 have died in Westchester, which had an early outbreak in neighboring New Rochelle in March before Yonkers became a hot spot.

At Saint Joseph’s, coronavirus-related symptoms accounted for more than 85% of all admissions for a period of nearly four weeks from March 20 to April 19.

Officials at the hospital knew the pandemic was going to crush them, since COVID-19 has proved particularly punishing for the largely minority population that makes up a significant portion of southwest Yonkers.

One particular challenge is that large families frequently live together in small homes, making it difficult to isolate sick ones. And, Leno noted, there have been few effective therapies other than isolation.

‘We’ve had many family members and groups, and we’ve even had people from the same family who have died within days of each other,’ Leno said. 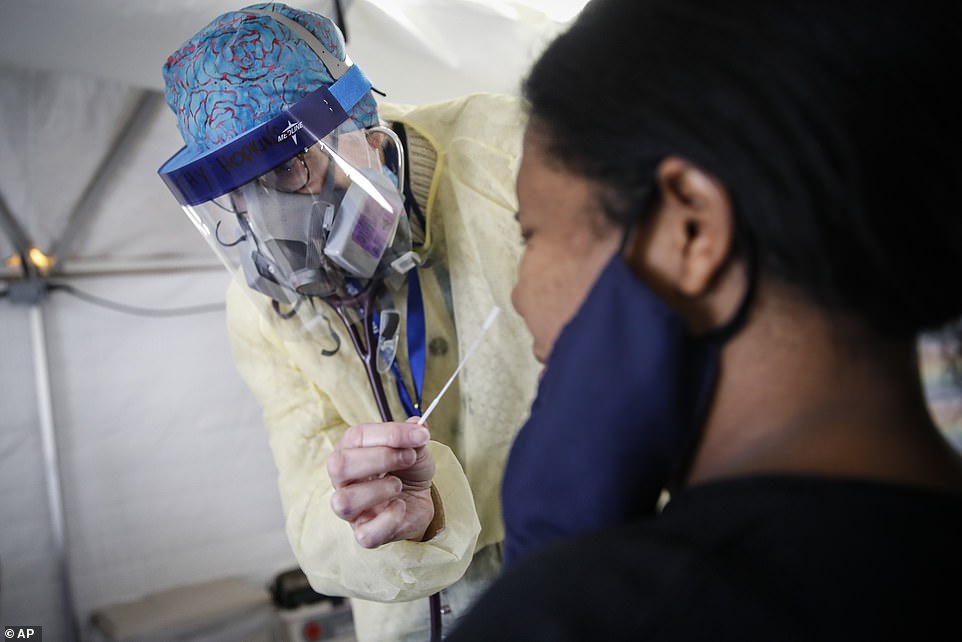 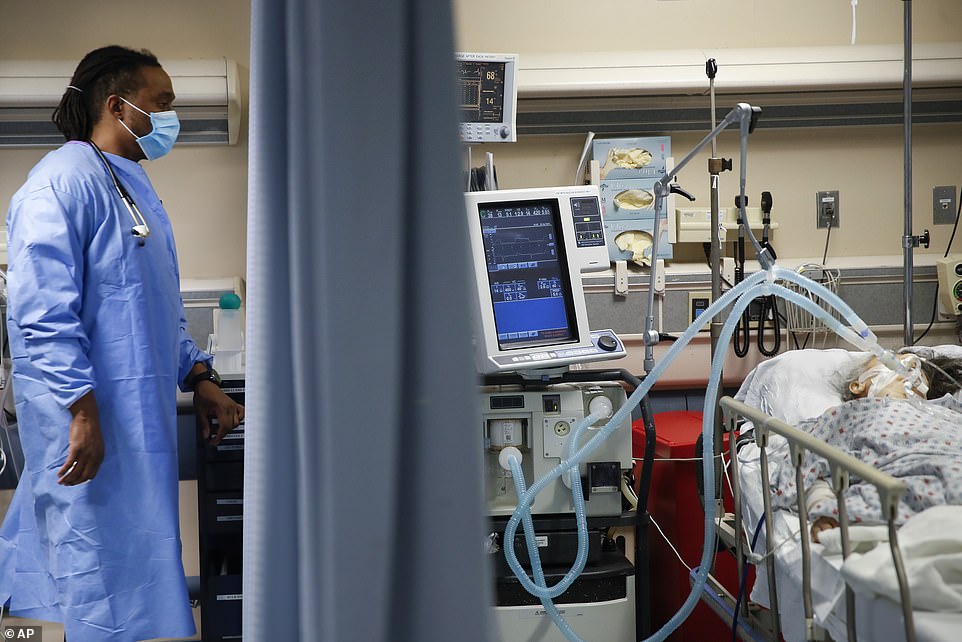 The community was hit so hard that a tent was erected outside the hospital on March 19 to accommodate the rush of people seeking to be tested.

In the first few days it was up, 150 to 175 people were examined each day to determine who should be tested, according to Catherine Hopkins, Saint Joseph’s director of school health and community relations.

Even some in the area who may otherwise be reluctant to seek medical care, fearing the loss of pay or in some cases deportation, showed up after seeing the effects of the coronavirus.

‘People are afraid,’ Hopkins said. ‘They’re scared. Their relatives, their friends are dying.’

For most people, the coronavirus causes mild or moderate symptoms that clear up in two to three weeks.

But for some, especially older adults and people with existing health problems, it can cause more severe illness and lead to death. 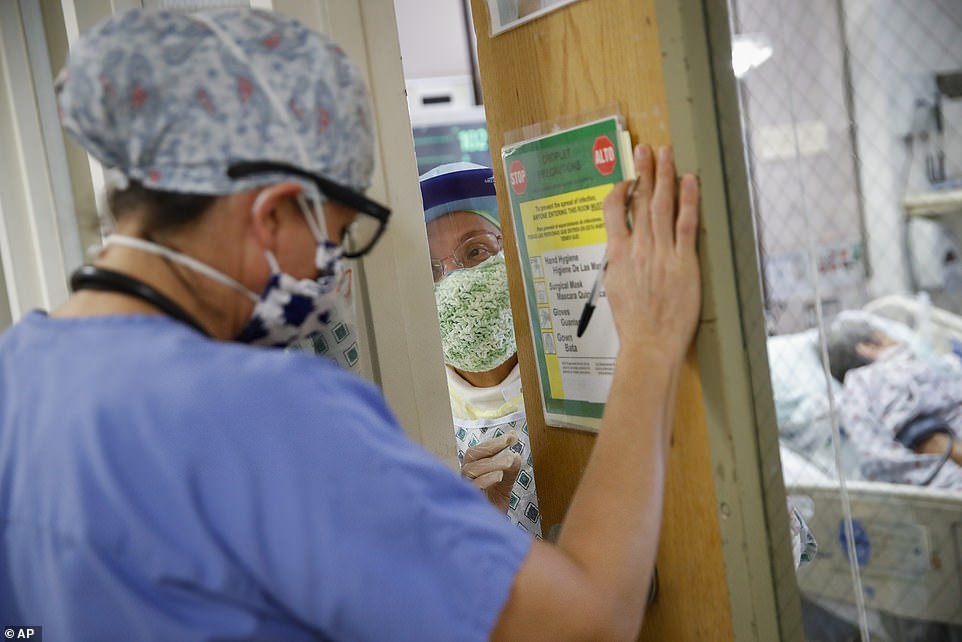 At Saint Joseph’s ICU, a masked nurse exchanges the vitals of a Covid-19 patient with resident physician Leslie Bottrell (left) after suctioning the lungs

Beyond the unprecedented medical challenges, the outbreak caused financial hardships for the Catholic hospital that has served Yonkers since 1888.

‘There’s a lot of people gouging out there. A mask that cost 50 cents before are costing $7, $8 each. Gowns that would cost 50 cents as well, are $7 each. Protective shields that were $1.25, people looking for 25 bucks a pop,’ said Frank Hagan, Saint Joseph’s chief financial officer. ‘So, cost is a significant issue.’

As is the morale of the staff, who fear for their own health, are juggling responsibilities when their colleagues are ill and are bombarded – even more than usual – with death and disease.

Fewer patients are coming to Saint Joseph’s now. Though there’s still a steady stream of patients wearing masks being wheeled into the ER every day, the staff is optimistic that the worst is over.

But there is also the fear that people will rush too quickly back to their lives – potentially triggering another flurry of infections.

‘They hear we’re over the plateau and they think, `OK, it’s business as usual,” Hopkins said. ‘It’s not. It can’t be.’