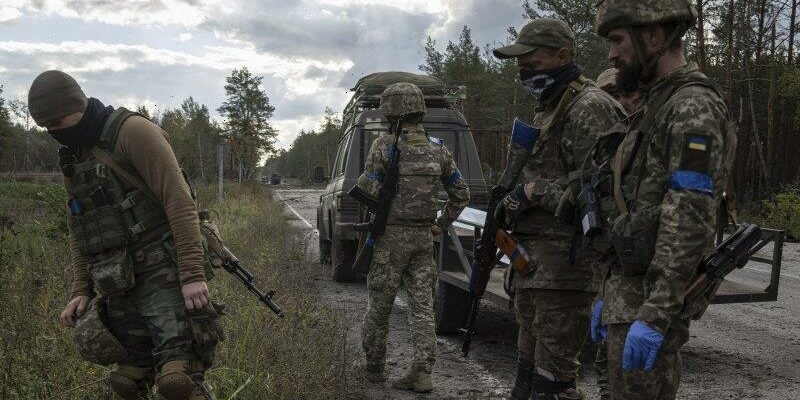 Lyman: Russian troops abandoned a key Ukrainian city so rapidly that they left the bodies of their comrades in the streets, offering more evidence on Tuesday of Moscow’s latest military defeat as it struggles to hang on to four regions of Ukraine that it illegally annexed last week.

Meanwhile, Russia’s upper house of parliament rubber-stamped the annexations following “referendums” that Ukraine and its Western allies dismissed as fraudulent.

Ukrainian soldiers sit on an armoured vehicle as they drive on a road between Izium and Lyman in Ukraine.Credit:AP

Responding to the move, Ukrainian President Volodymyr Zelensky formally ruled out talks with Russia, declaring that negotiations with Russian President Vladimir Putin are impossible after his decision to take over the regions.

The Kremlin replied by saying that it will wait for Ukraine to agree to sit down for talks, noting that it may not happen until a new Ukrainian president takes office.

“We will wait for the incumbent president to change his position or wait for a future Ukrainian president who would revise his stand in the interests of the Ukrainian people,” Kremlin spokesman Dmitry Peskov said.

Despite the Kremlin’s apparent political bravado, the picture on the ground underscored the disarray Putin faces in his response to Ukrainian advances and attempts to establish new Russian borders. 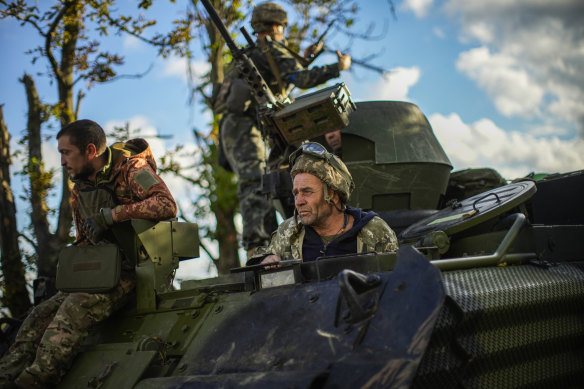 Over the weekend, Russian troops pulled back from Lyman, a strategic eastern city that the Russians had used as a logistics and transport hub, to avoid being encircled by Ukrainian forces. The city’s liberation gave Ukraine a key vantage point for pressing its offensive deeper into Russian-held territories.

Two days later, an Associated Press team reporting from the town saw at least 18 bodies of Russian soldiers still on the ground. The Ukrainian military appeared to have collected the bodies of their comrades after fierce battles for control of Lyman, but they did not immediately remove those of the Russians. 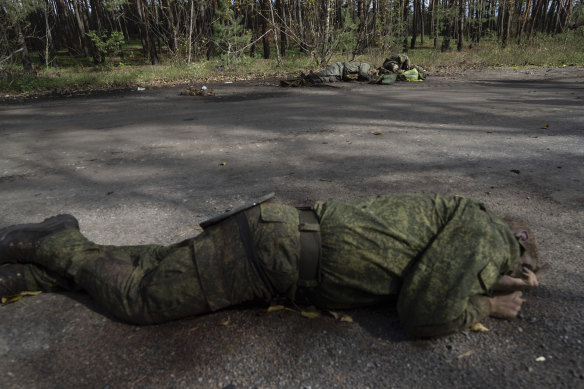 Dead bodies of Russian servicemen lie on the ground in the recently recaptured town of Lyman.Credit:AP

“We fight for our land, for our children, so that our people can live better, but all this comes at a very high price,” said a Ukrainian soldier who goes by the nom de guerre Rud.

Lyman residents emerged from basements where they had hidden during the battle and built bonfires for cooking. The city has had no water, electricity or gas since May. Residential buildings were burned. A few residents emerged on bicycles.

An 85-year-old woman, who identified herself by her name and patronymic, Valentyna Kuzmivna, recalled a recent explosion nearby.

“I was standing in the hall, about five meters away, when it boomed,” she said. “God forbid, now I can’t hear well.”

The Russian forces launched more missile strikes at Ukrainian cities on Tuesday as Kyiv’s forces pressed their counteroffensives in the east and the south.

Several missiles hit Ukraine’s second-largest city of Kharkiv, damaging its infrastructure and causing power cuts. Kharkiv Governor Oleh Syniehubov said one person was killed and at least two others, including a 9-year-old girl, were wounded.

In the south, four civilians were wounded when Russian missiles struck the city of Nikopol.

After reclaiming control of Lyman in the Donetsk region, Ukrainian forces pushed further east and may have gone as far as the border of the neighbouring Luhansk region as they advance toward Kreminna, the Washington-based Institute for the Study of War said in its latest analysis of the combat situation. 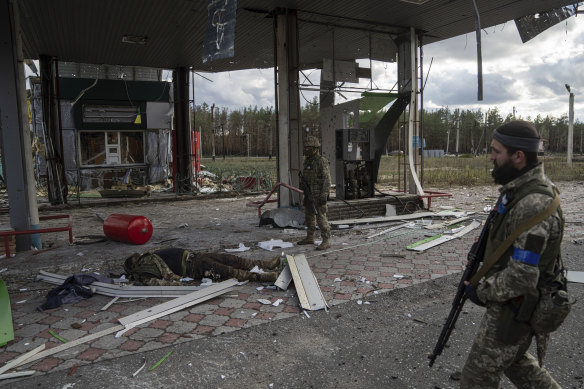 Ukrainian servicemen find a body of their comrade on the destroyed petrol station in the recently recaptured town of Lyman, Ukraine.Credit:AP

On Monday, Ukrainian forces also scored significant gains in the south, raising flags over the villages of Arkhanhelske, Myroliubivka, Khreshchenivka, Mykhalivka and Novovorontsovka.

In a video address to a conference in the Turkish capital, Ankara, on Russia’s war against Ukraine on Tuesday, Perebyinis said the additional weapons wouldn’t lead to an escalation but instead would help to end the war sooner.

“We need additional long-range artillery and ammunition, combat aircraft and armed vehicles to continue the liberation of the occupied territories,” the deputy minister said. “We need anti-aircraft and anti-missile defence systems to secure our civilians and critical infrastructure from the terrorist attacks on the Russian forces.”

Russian Defence Minister Sergei Shoigu said on Tuesday that the military has recruited more than 200,000 reservists as part of a partial mobilisation launched two weeks ago. He said that the recruits were undergoing training at 80 firing ranges before being deployed to the front lines in Ukraine.

Putin’s mobilisation order said that up to 300,000 reservists were to be called up, but it held the door open for an even bigger activation. It sparked protests in many areas across Russia and drove tens of thousands of men to flee Russia in a challenge to the Kremlin.

The Ukrainian successes in the east and the south came even as Russia moved to absorb four Ukrainian regions amid the fighting there.

The upper house of the Russian parliament, the Federation Council, voted Tuesday to ratify treaties to make the eastern Donetsk and Luhansk and the southern Kherson and Zaporizhzhia regions part of Russia. The lower house did so on Monday.

Putin is expected to quickly endorse the annexation treaties.

Russia’s moves to incorporate the Ukrainian regions have been done so hastily that even the exact borders of the territories being absorbed were unclear.

In other developments, the head of the company operating Europe’s largest nuclear plant said Ukraine is considering restarting the Russian-occupied facility to ensure its safety as winter approaches.

In an interview with The Associated Press on Tuesday, Energoatom President Petro Kotin said the company could restart two of the Zaporizhzhia Nuclear Power Plant’s reactors in a matter of days.

“If you have low temperature, you will just freeze everything inside. The safety equipment will be damaged,” he said. 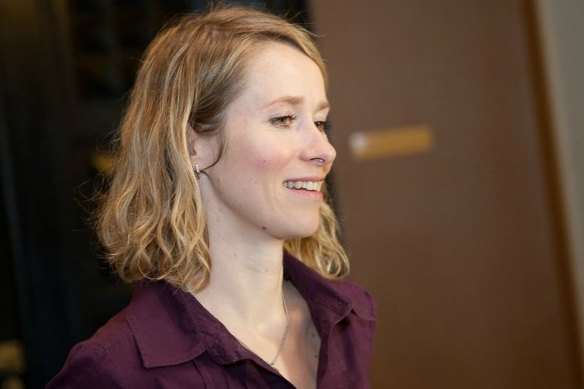 Fears that the war in Ukraine could cause a radiation leak at the Zaporizhzhia plant prompted the shutdown of its remaining reactors. The plant has been damaged by shelling, prompting international alarm over the potential for a disaster.

Estonia’s prime minister said on Tuesday that the West must not give in to Moscow’s nuclear threats or premature peace proposals but stand firmly in support of Ukraine as the invaded country fights to rid its occupied territories of Russian soldiers.

Kaja Kallas, who has led Estonia’s government since last year, told The Associated Press in an interview that “very dangerous” calls for negotiations and peace in Ukraine have come from “very prominent people” lately.

She didn’t specify anyone by name, but her comments came a day after Tesla CEO Elon Musk floated on Twitter a proposal for ending the war that elicited fierce opposition from Kyiv.