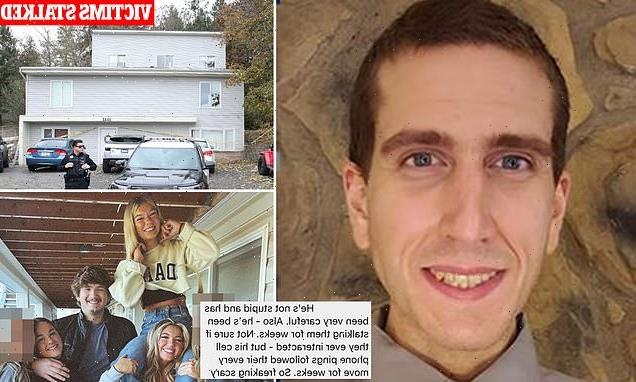 Idaho suspect stalked victims for WEEKS and wore GLOVES after quadruple murder to avoid leaving trail of evidence, claims friend of investigator: ‘He’s not stupid and has been very careful’

The man accused of the horrific slayings of four University of Idaho students was allegedly stalking them in the weeks leading up to the murders and wore gloves in public places after the killings.

Bryan Kohberger, 28, was fastidious about not leaving his fingerprints behind after the murders, even wearing gloves when he entered a grocery store, according to a friend of one of the police officers assigned to follow him there.

‘He’s not stupid and has been very careful,’ the anonymous source said.

While Kohberger was under surveillance in Pennsylvania, according to the source, police witnessed him appearing to try and avoid leaving any more DNA or fingerprints behind by taking protective measures in public.

‘A good friend of ours was one of the cops who has been following him the last couple days he,’ the source explained of their connection to the surveillance on Kohberger in Pennsylvania. 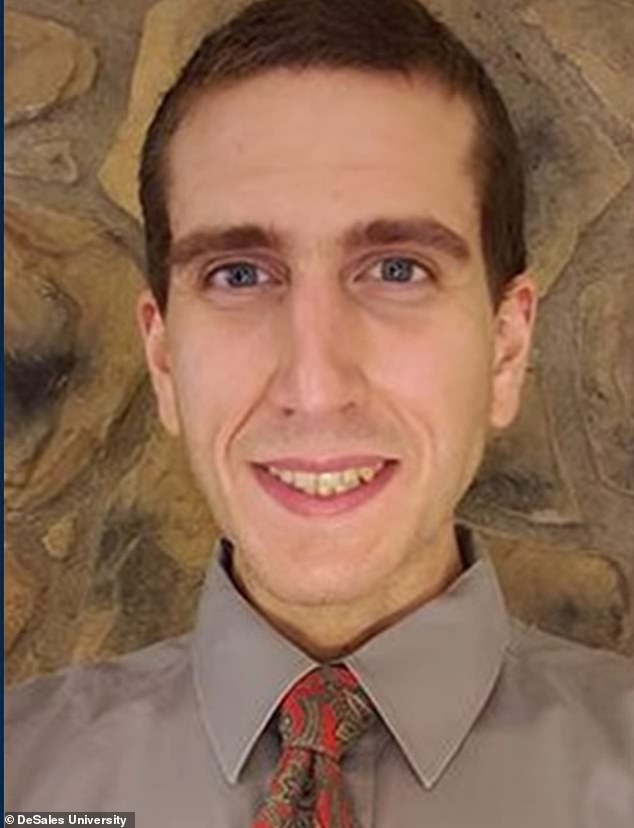 Bryan Kohlberger, 28, the suspect in the University of Idaho murders, was allegedly stalking his victims for weeks and wore gloves after the killings according to a source 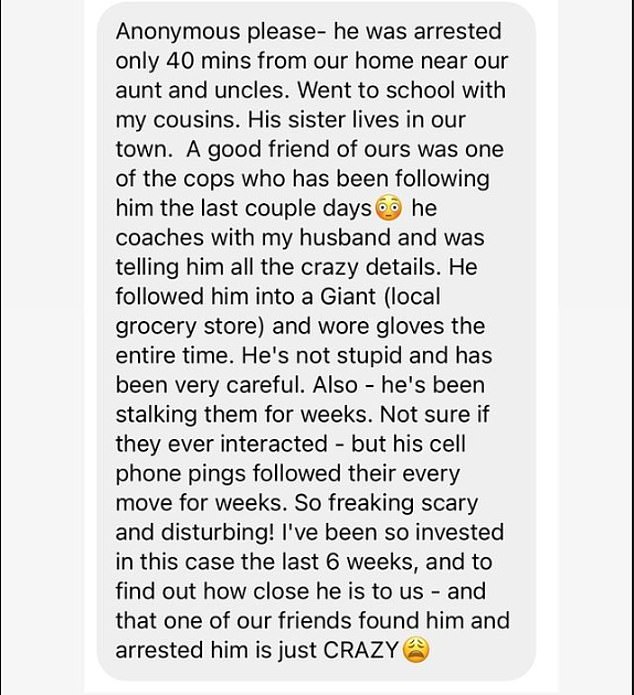 Police, who were tracking him as he fled to Pennsylvania, witnessed him appearing to try and avoid leaving any more DNA or fingerprints behind by taking protective measures in public

‘He followed him into a Giant (local grocery store) and wore gloves the entire time.’

They also allege that the prime suspect was stalking his victims ahead of the murders – with their cell phone locations matching up on several occasions.

‘Not sure if they ever interacted – but his cell phone pings followed their every move for weeks.’

Kohberger was arrested at his family’s home on Friday following a more than month-long investigation.

The source said Kohberger was arrested just 40 minutes from where they live, and that his sister lives in their town.

The source has even more overlap with Kohberger, whose family lives in a small town in the Pocono Mountains. According to them, he also allegedly went to school with their cousins, and lives near their aunts and uncles.

The proximity to a quadruple murderer has shaken them and the community.

‘So freaking scary and disturbing!’ they wrote.

‘I’ve been so invested in this case the last 6 weeks, and to find out how close he is to us – and that one of our friends found him and arrested him is just crazy.’

After the murders, he first returned to teaching at the University of Washington, but later drove 2,000 miles from Idaho to Pennsylvania in order to hide out at his parent’s Poconos home.

Police were on his tail during the cross-country road trip and continued to follow him in Albrightsville, Pennsylvania, where he was ultimately apprehended. 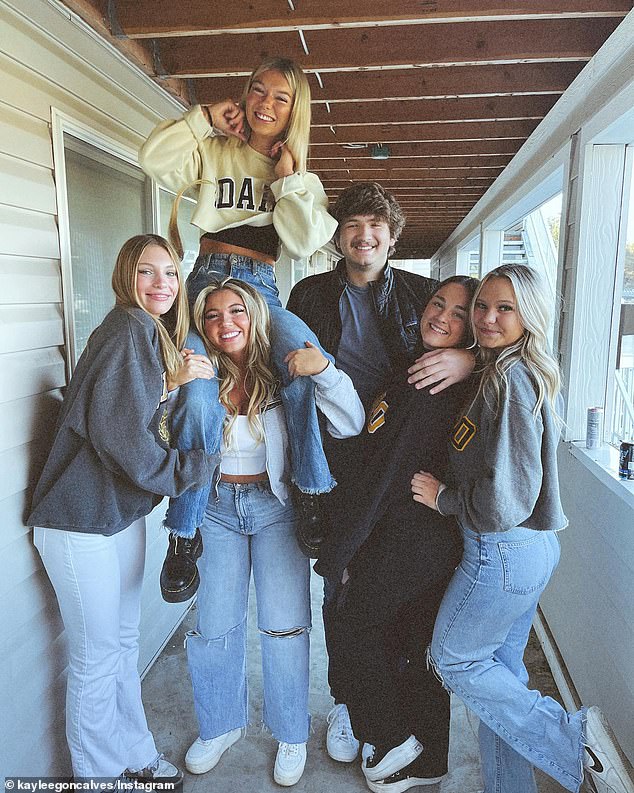 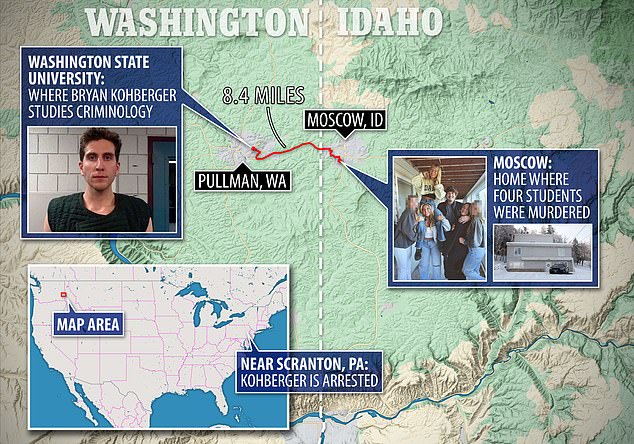 According to students in his class, Kohberger acted as if nothing had happened after the killings took place.

WSU’s online directory shows he worked as a teaching assistant for the university’s criminal justice and criminology program. He was also a PhD student in the department.

Multiple students in the program told Fox Seattle that Kohberger did not appear different following the murders of Kaylee Goncalves, 21, Maddie Mogen, 21, Xana Kernodle, 20, and 20-year-old Ethan Chapin in Moscow, Idaho, a 15-minute drive from WSU.

Ben Roberts, a criminology student, told the Fox affiliate that Kohberger was ‘confident’ and ‘outgoing’ but still appeared as if ‘he was always looking for a way to fit in.’

Speaking about the horrific allegations against Kohberger, Roberts said, ‘It’s pretty out of left field. I had honestly just pegged him as being super awkward.’

Roberts began studying at WSU in August at the same time as Kohberger.

‘One thing he would always do, almost without fail, was find the most complicated way to explain something,’ he said.

BK Norton, a student in the WSU Criminal Justice and Criminology Department, said Friday that they didn’t know Kohberger well, but didn’t like him.

‘We interacted in class, but personally I was not a fan of Bryan because of comments he had made about LGBTQ+ individuals,’ they said in an email to The Associated Press.

‘He was a little off, but I always thought it was because he was awkward and wanted to fit in.’

Before pursuing a PhD at the University of Washington Kohberger attended DeSales in Pennsylvania.

While there, the owner Jordan Serulneck, 34, has claimed he had problematic interactions with women at his bar, asking women who they were with and where they lived.

Kohberger memorably harassed female staff at Seven Siren Brewing Company near his hometown. Serulneck told NBC that employees labeled Kohberger in their system as a guy who ‘makes creepy comments’ and said he once called a staffer ‘a b***h’ for spurning his advances.

According to staffers notes, Kohberger would ‘have two or three beers and then just get a little too comfortable.’ The behavior was so upsetting that the brewery owner approached his patron about it.

Kohberger denied the behavior, but never showed up at the bar again. 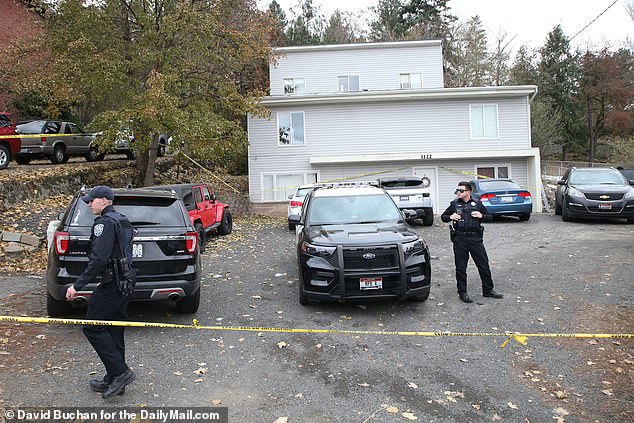 Kohberger was allegedly stalking the students in the weeks leading up to the murders. Pictured is the home where the murders took place, just over eight miles from where he worked as a PhD student and teaching assistant 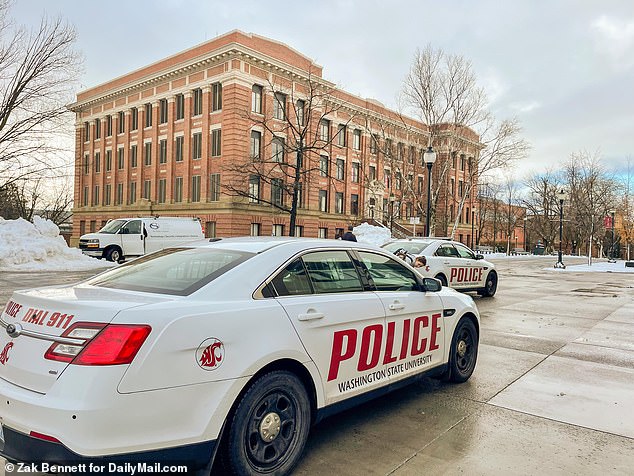 On Friday, Moscow Police Chief James Fry confirmed that the suspect was a resident of Washington State University at the time of his arrest.

Fry said that officials at the school’s Pullam campus where he worked were cooperative in allowing investigators to execute a search warrant at his office and his on-campus apartment.

The WSU Pullman campus and WSU provost Elizabeth Chilton said in a statement, ‘On behalf of the WSU Pullman community, I want to offer my sincere thanks to all of the law enforcement agencies that have been working tirelessly to solve this crime.’

Chilton continued, ‘This horrific act has shaken everyone in the Palouse region.’

The Moscow Police Department continues to encourage anyone to come forward with information, as they’re ‘still putting pieces together.’

The police chief could not reveal much about the case as of Saturday, as Idaho state law prohibits officers from releasing information until the criminology student has made his first court appearance in Idaho.

He did, however, say it was ‘disappointing’ to learn that the alleged murderer was studying criminology, as this is ‘not something we want in our profession.’ 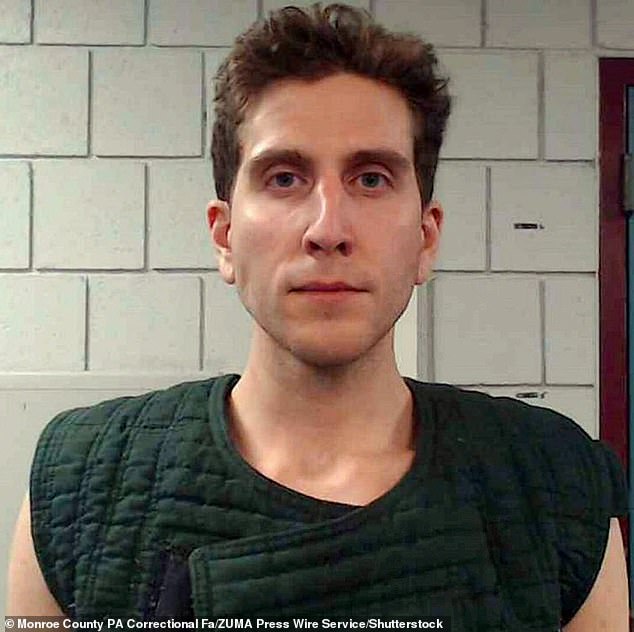 Kohberger’s lawyer said Saturday that his client ‘looks forward to resolving these matters.’

‘Mr. Kohberger is eager to be exonerated of these charges and looks forward to resolving these matters as promptly as possible,’ Monroe County Chief Public Defender Jason LaBar, who only representing the suspect until his extradition, told CNN.

He added that the suspect will agree to waive his extradition hearing, which was set for Tuesday, to be sent to Idaho.

Previously, fellow students who attended high school with Kohberger said that he would become aggressive when referred to as overweight. 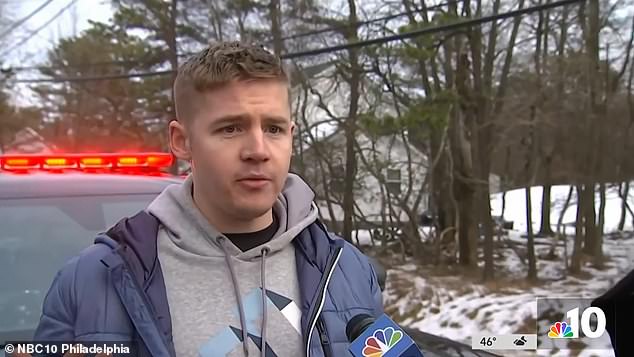 Schyler Jacobson, shown here, said in an interview, ‘I would text [Kohlberger] and be like ‘Hey, you wanna go for a run?’ We’d go for six/seven mile runs at night so when I saw who it was I was just like in complete shock, it was so close to home’

In an interview with NBC Philadelphia, Kohberger’s one-time friend Schlyer Jacobson said that the pair were close around 10 years ago and that during their runs, they had ‘all of these positive conversations.’

Jacobson described the murder suspect as being ‘uplifting’ and often talked about wanting to get in shape. He said that there was nothing concerning about Kohberger’s behavior.

In a separate interview Jacobson spoke about their friendship telling WBRE, ‘I would text him and be like ‘Hey, you wanna go for a run?’ We’d go for six/seven mile runs at night so when I saw who it was I was just like in complete shock, it was so close to home.’ 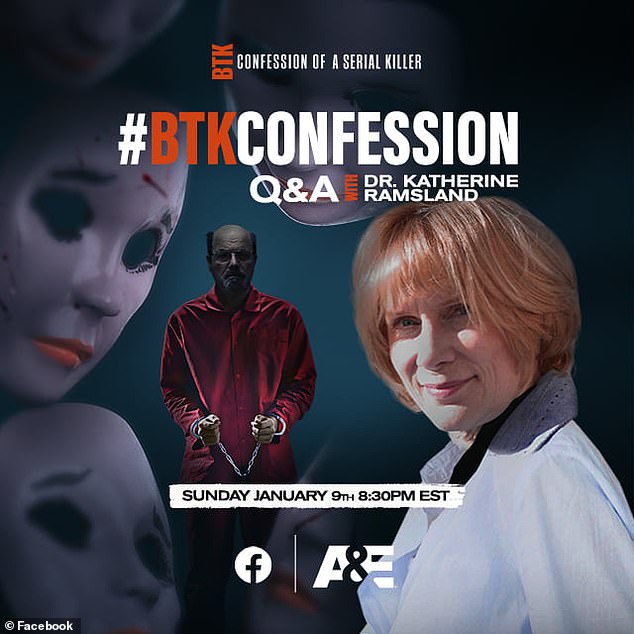 Ramsland has written books including, How to Catch a Killer, The Mind of a Murderer and The Human Predator: A Historical Chronicle of Serial Murder and Forensic Investigation

Prior to studying and teaching at WSU, wrapped up his criminology studies at DeSales University, in Center Valley, Pennsylvania, in June.

While there, Kohlberger studied under one of the country’s most renowned forensic scientists, Dr. Katherine Ramsland.

The Daily Beast reports that one of the courses taught by Ramsland is Psychology of Death Investigations.

Ramsland has written books including, How to Catch a Killer, The Mind of a Murderer and The Human Predator: A Historical Chronicle of Serial Murder and Forensic Investigation.

The Michigan-native is a professor of criminal justice and forensic psychology at DeSales. Her published works focus on murder, the supernatural and other aspects of true crime.

A classmate of Kohberger’s described him as being ‘well spoken’ and ‘very intelligent’ but also ‘seemingly detached.’

The murders of the four students in Idaho is the type of gruesome situation that Ramsland is extremely familiar with.

Ramsland spoke about the dark subjects she writes about in a 2009 interview saying, ‘It’s clear that everything I do that truly engages me has this dark, edgy quality. Vampires, ghosts, corpses, serial killers, death investigations, cemeteries—they all take me into the shadows where most people fear to tread.’ 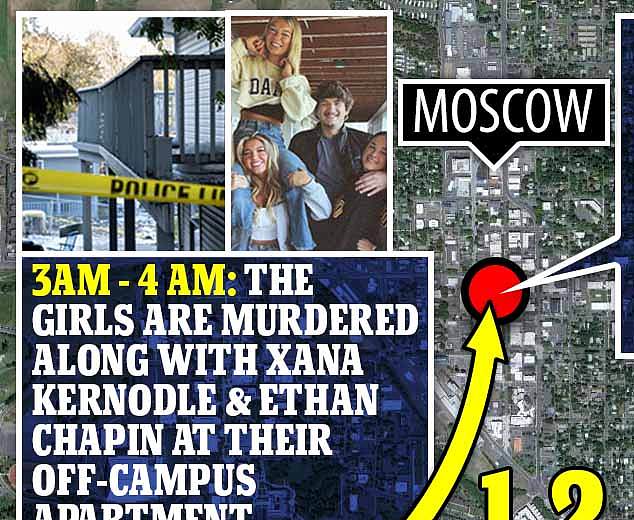 In a separate 2018 interview, Ramsland said that she has consulted on several TV shows about forensic science. She said that when shows say that they have scientific consultants, it means they have paid a scientist to give them some ideas.

Ramsland has consulted on the shows NCIS, Bones and The Alienist, as well as written a biography of famed horror novelist Anne Rice.

She offered her advice on how people could avoid becoming statistics saying, ‘Be vigilant. Don’t accept media stereotypes, which make you more vulnerable. Don’t think like a victim. It sends signals to predators of your vulnerability.’