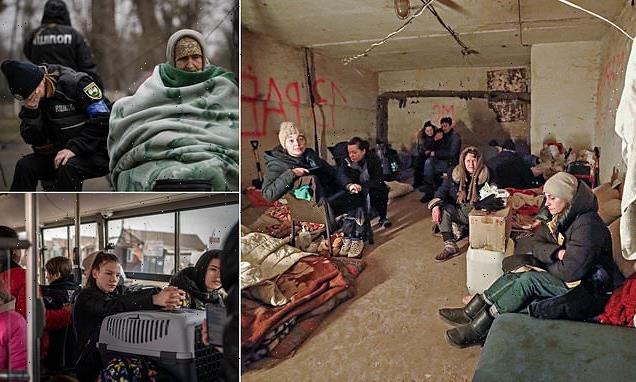 Hours on trucks, interrogated in camps… IAN BIRRELL sees the hell of forced deportation faced by brave Ukrainians who sheltered for weeks from Russian shelling in Mariupol

After almost three weeks of war, the candles and food were running out for the 90 petrified people sheltering in the basement beneath a sturdy Soviet-era theatre near Mariupol, as Russian shells hammered down above their heads.

They flicked on their lighters to pick a path through the darkness to the toilet, while lunch was sometimes reduced to just a few biscuits shared among a group that included 15 children, along with many older folks.

Then the Russian soldiers arrived. ‘They were very surprised there were people alive,’ said Olga, a translator in her mid-twenties. ‘They allowed the women to go outside and get water but banned men from leaving the shelter.’ 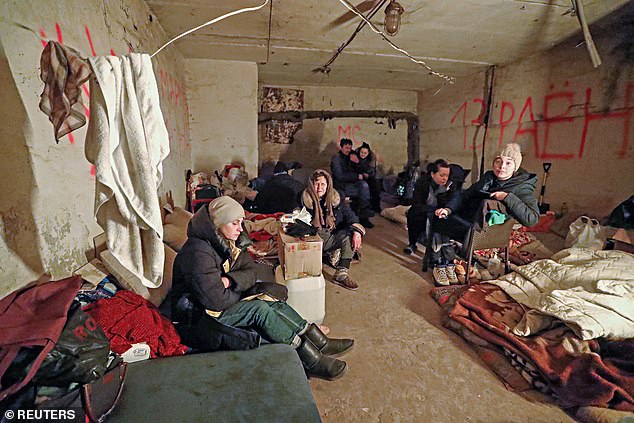 After almost three weeks of war, the candles and food were running out for the 90 petrified people sheltering in the basement beneath a sturdy Soviet-era theatre

The following day, they were told there would be an evacuation. But when Olga’s uncle went up to find out the details, the soldiers he encountered were aggressive.

They pulled his hat over his eyes to intimidate him, warned that if he moved they would shoot him and spent half an hour searching his mobile phone – and then they left.

Then the next day, on March 15, the soldiers returned and ordered them out of the basement. Many of them were hesitant, said Olga. ‘Everyone rushed outside to see if there was an option to stay. I did not want to go. It was not clear where we were going.’

This was the start of their forced evacuation from Ukraine that took them over the Russian border and into sinister ‘filtration camps’, spending three days under armed guard with interrogations by men in unmarked military uniforms before being dispersed around the country.

The abductions and relocations, subverting the refugee process, hint at dark echoes of past atrocities. Vadym Boichenko, Mariupol’s alarmed mayor, has even likened it to Nazi transportations to concentration camps in World War Two. Others have drawn parallels with mass deportations inflicted by Joseph Stalin when an estimated 3million people in the Soviet Union were sent to camps in Siberia and Central Asia. 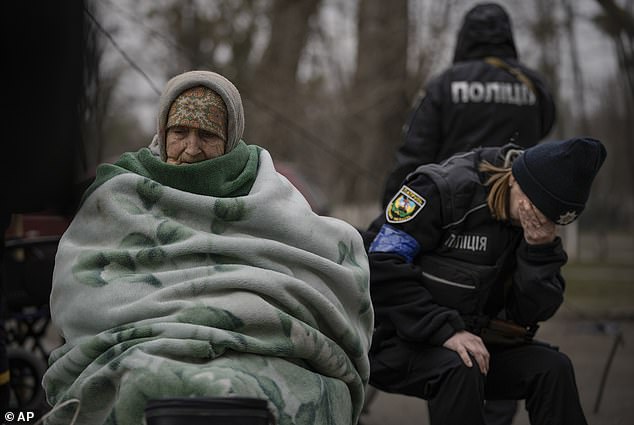 The situation has added to the fears of those, such as Tatiana Bezruchenko, with friends or families still trapped in Mariupol as the bombs rain down

Britain has joined international condemnation of the ‘abduction and deportation’ of citizens from cities such as the devastated port of Mariupol amid fears that Vladimir Putin may use the refugees as hostages to heap pressure on Ukraine to accept his peace terms.

Moscow’s defence ministry claims to have ‘accepted’ 439,420 refugees escaping the war, including 98,000 people ‘rescued’ from Mariupol, and to have received 2.72million ‘requests for evacuation’ from more than 2,000 settlements in Ukraine.

Last week a Ukrainian official said Moscow was passing this data to them but they were struggling to determine if the figures were ‘propaganda or truth’.

She added, however, that they knew of incidents in which troops had taken people from bomb shelters and transported them to Russia through ‘filtration camps’ set up in both the self-declared Donetsk People’s Republic and over the border.

Satellite images have revealed one cluster of 30 tents erected in a coastal village 11 miles from the shattered outskirts of Mariupol, while officials in the ruined port claim 15,000 residents have been forcibly relocated into Russia.

Iryna Vereshchuk, Ukraine’s deputy prime minister, said at the weekend they have collated 40,000 cases ‘including thousands of children.’ Now, Olga – not her real name – has given the first eye-witness account of the forced evacuations from cities under fire.

Like many Ukrainian citizens, she dismissed fears Putin might invade. ‘We were so sure there would be no war because it was obvious Mariupol is a pro-Ukrainian city. It is hard to believe that the war could be this horrible and this brutal.’ Her family moved on the third day of the war into a shelter beneath the town’s Palace of Culture, and Olga stayed below ground for more than a fortnight with eight family members despite a direct hit on the building.

‘We could hear shells striking the building above us, the sound of walls collapsing, the sound of a shell hitting the floor of the palace of culture, which was our ceiling.

‘It was scary since we did not know if the ceiling was going to collapse or not.’

Then came their ‘rescue’ by the very Russian forces that were tormenting their lives and destroying their town. ‘We were never told exactly what was happening and we never knew what was going to happen next,’ said Olga.

‘They told women and children to leave the bomb shelter but the majority of men had to stay. It was the first time I went outside for many days, seeing the sun. It was a horrible moment – I saw that everything around me was shelled.’

The frightened families were taken to a half-destroyed school across the road, then loaded on to military trucks. 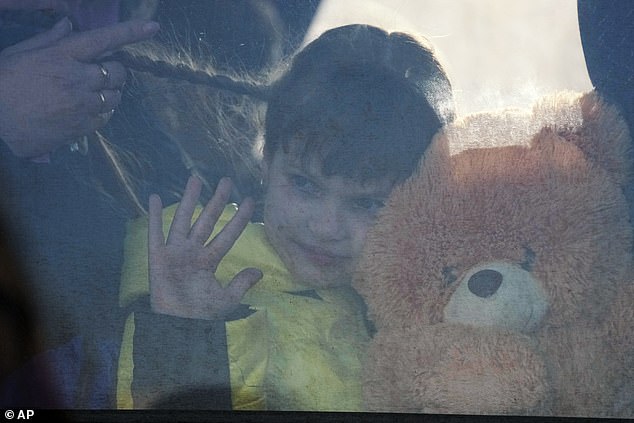 ‘There were people from our bomb shelter but also from other places. It looked like they went from one house to another, telling people about evacuation.

‘I was in a state of despair. All the people giving us orders were armed, in military uniforms, but with no insignia.

‘I could not understand if they were police or military. But we could hear the fighting very close so we just got into the trucks.’

They drove to another village captured by Russians and were taken to another school.

‘Some people asked if they could stay in this village but were told this was not allowed. Some were saying they wanted to return to our town but the Russians did not allow this either.’

After a freezing night trying to sleep in classrooms, surrounded by drunk guards with guns who refused to tell them where they would be going, the refugees were driven for several hours to a border town in the self-declared Luhansk People’s Republic.

Their guards told them they were going into ‘filtration’ camps.

‘This is a big tent with a lot of men dressed in military uniforms,’ explained Olga. ‘You are told to give your document and the phone. You are also told to tell them your phone’s passwords.

‘I’m not brave enough to disobey so I just gave it all to them. No one was explaining anything. I overheard they were downloading all the contacts from our phones.’

Olga was photographed, fingerprinted and subjected to repeated interrogation by three officials over her personal details, any relatives serving in armed forces and views on Ukrainian politics before her phone was returned to her.

Finally, the refugees were put back on buses, which waited for nine hours through the night to the fury of many mothers enduring the process.

‘They said the situation was intolerable for their children. They were told to stop arguing otherwise it would be even worse.’

After crossing the border, the ‘evacuees’ were offered 10,000 roubles (£75) to sign papers saying they accepted assistance from Russia. Olga said everyone refused.

She was among those picked out for another round of questioning by a man almost certainly from security services, who bombarded her with ‘strange questions as if trying to lead me into saying something’. The hour-long interrogation ranged from questions over the Ukrainian army through to details about her boyfriend and interests. ‘He was deliberately trying to scare me. He asked me why did I behave so strangely, was I in some sort of sect?’

After questioning concluded, the group was placed back on buses and taken under a police escort to Taganrog train station, 30 miles inside the Russian border.

They were told they were free to leave – but most had no money or documents after fleeing bomb shelters while few of them knew anyone in Russia to help them return home. So without anywhere to go, they were put on a train to Vladimir, a town 780 miles away in central Russia.

Olga was fortunate. Friends helped her find a taxi, board a train to St Petersburg and cross the border to Finland, but she knows others from her town are still stuck. ‘I really want to help them leave Russia and come somewhere safe,’ she said.

The spokesman for a voluntary group assisting Ukrainians in Russia said they started receiving information about people being forced into the country eight days ago and had since received dozens of pleas for help.

‘People are taken to Russia against their will under huge psychological pressure, stressed and disoriented. They are not provided with any information and find it very hard to be alone in a foreign country, with no money and sometimes no documents.’

Ukrainian officials have demanded more information from Russia. They have received similar reports of people being forced to evacuate into Belarus, while an investigation has been launched into the illegal deportation of 2,389 children from the occupied territories of Donbas to Russia. 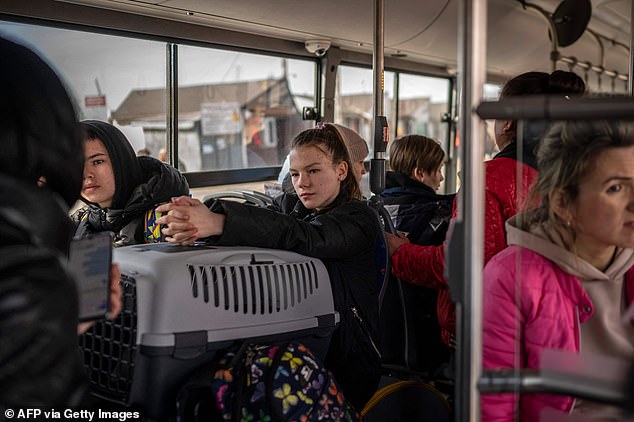 Tetiana Lomakina, the Ukrainian president’s adviser on humanitarian corridors, said exhausted people were being ‘evacuated’ at gunpoint after weeks under shelling

Tetiana Lomakina, the Ukrainian president’s adviser on humanitarian corridors, said exhausted people were being ‘evacuated’ at gunpoint after weeks under shelling.

‘They are questioned, their phones and documents are taken. Some people were able to preserve their documents, but there are also other ones who did not.’

She said they had also seen reports of Ukrainian citizens being given certificates that bar them from leaving Russia for two years and had started hearing cases of families being split up ‘and the parents sent to different locations with children’.

She said: ‘There is no rational explanation for such inhumane actions. I cannot imagine why these forced evacuations would be done. The only reason, in my opinion, is to humiliate people, punish them and break their will.’

The situation has added to the fears of those, such as Tatiana Bezruchenko, with friends or families still trapped in Mariupol as the bombs rain down.

She is terrified over the plight of her 77-year-old mother.

‘She’s still in the bomb shelter and there is fighting going on. I’m very worried for her – but mostly I’m worried that she’ll be forced into Russia. I know she doesn’t want to go there,’ she said.

‘And if she’s taken to Russia I won’t be able to find her or help her. I’m so scared that they’ll take my mother somewhere and I will never see her again.’