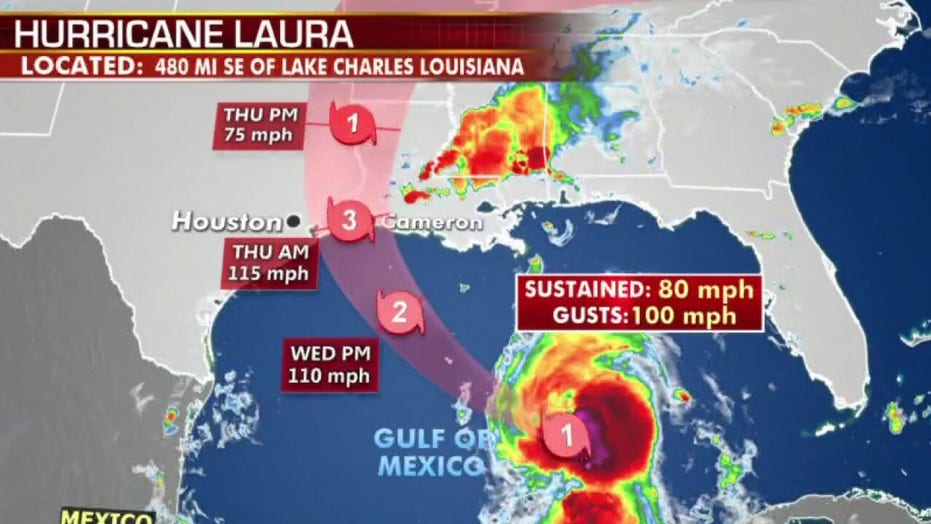 Forecasters expect Laura to grow to a major category three hurricane over the warm waters of the Gulf of Mexico before hitting the U.S. coastline late Wednesday or early Thursday; Leland Vittert reports.

Hurricane Laura is expected to strengthen into a Category 4 storm and produce a life-threatening storm surge before it makes landfall on the Louisiana and Texas coasts Wednesday, according to the National Hurricane Center.

As of early Wednesay, the hurricane is located ofver the Gulf of Mexico and has maximum sustained winds of 110 mph and is moving northwest at 15 mph.

About 500,000 residents were ordered to evacuate the coast Tuesday over fears of extreme winds and flash flooding and a Storm Surge Warning has been issued along the Texas coast from Freeport to San Luis Pass.

More than 385,000 residents were told to flee the Texas cities of Beaumont, Galveston and Port Arthur, and another 200,000 were ordered to leave low-lying Calcasieu Parish in southwestern Louisiana, where forecasters said as much as 13 feet of storm surge topped by waves could submerge whole communities.

Watches and warnings have also been issued for certain parts of Mississipi and Louisiana.

“The waters are warm enough everywhere there to support a major hurricane," National Hurricane Center Deputy Director Ed Rappaport said late Tuesday. "The waters are very warm where the storm is now and will be for the entire path up until the Gulf Coast."

He urged residents in the southwest part of the state to be evacuated by noon Wednesday when the effects of the storm will start to be felt.

Officials told residents to stay with relatives or in hotel rooms if possible to avoid spreading the coronavirus. Buses were stocked with protective equipment and disinfectant, and they would carry fewer passengers to keep people apart, Texas officials said.