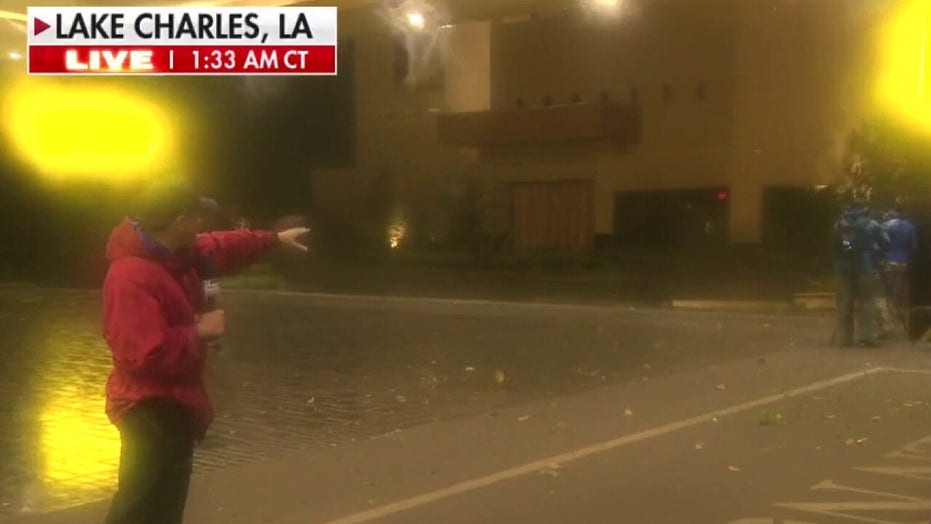 The category 4 storm makes landfall on the Gulf Coast; Leland Vittert is on the scene in Lake Charles, Louisiana.

The historic Hurricane Laura made landfall early Thursday in Cameron, about 45 miles south of Lake Charles, as a dangerous Category 4 hurricane with sustained winds of 150 mph.

"This is a time for all of us to be praying for the best, while we're prepared for the worst. God bless you and your families," Lousiana Gov. John Bel Edwards tweeted just before the storm made landfall, urging much of the state to stay off the road. 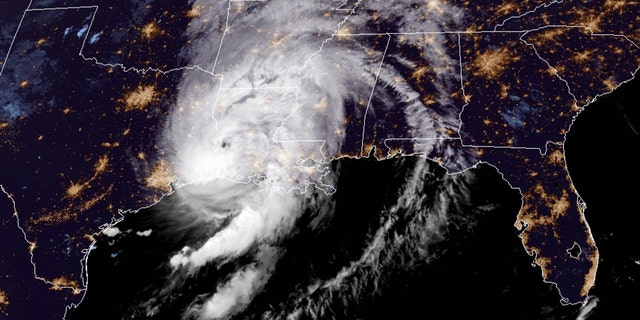 Hurricane Laura can be seen after making landfall along the Louisiana coast on Aug. 27, 2020.
(NOAA/GOES-East)

In Lake Charles, which took a direct hit, skyscrapers were without glass, while pieces of sheet metal and roofing were seen throughout city streets.

Storm chaser Stephen Jones told "Fox & Friends First" that Hurricane Laura came into Lake Charles with "just as much fury" as it had over the Gulf of Mexico.

"This entire city is severely damaged," he said. 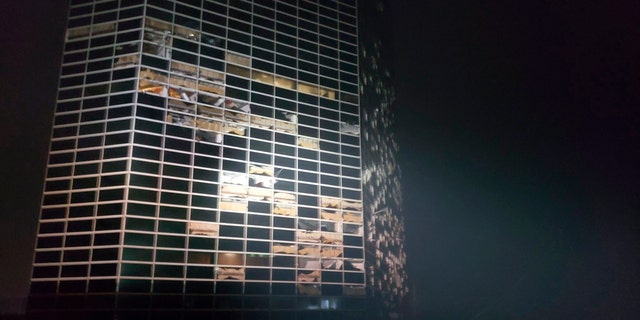 A building that was damaged overnight by Hurricane Laura stands in Lake Charles, La., Thursday, Aug. 27, 2020.
(Stephen Jones via AP)

Storm chaser Jeff Piotrowski shared a photo of major damage to one skyscraper in the city.

"Some of the building may be total losses. Many roof off massive flying debris," he tweeted.

There were also reports of some injuries downtown.

"Flying glass from some of the skyscrapers fell on people don’t know the extent of the injuries," Piotrowski said. 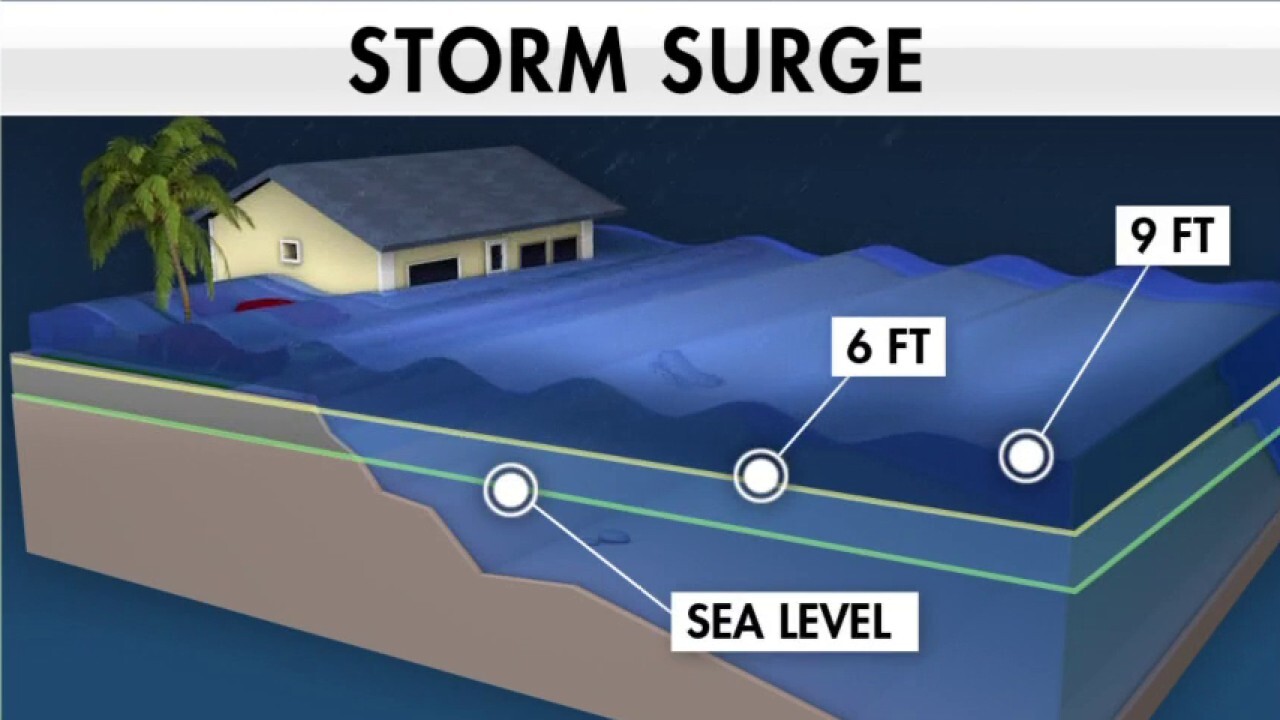 Authorities had ordered coastal residents to get out, but not everyone did in an area that was devastated by Rita in 2005.

“There are some people still in town and people are calling … but there ain’t no way to get to them,” Tony Guillory, president of the Calcasieu Parish Police Jury, told the Associated Press early Thursday morning over the phone as he hunkered down in a Lake Charles government building that was shaking from the storm.

Guillory said he hopes stranded people can be rescued later Thursday but fears that blocked roads, downed power lines and flooding could get in the way.

Other videos from the area showed road signs bending, trees shaking violently and a large recreational vehicle being blown over.

FEMA HEAD WARNS OF 'UNSURVIVABLE SURGE' FROM HURRICANE LAURA, TELLS RESIDENTS TO 'GET OUT'

In Cameron Parish, where Laura came ashore, officials said at least 150 people refused pleas to leave and planned to weather the storm in everything from elevated homes to recreational vehicles. The result could be deadly since forecasters said the parish could be completely covered by ocean water with an "unsurvivable" storm surge of up to 20 feet.

“It’s a very sad situation,” said Ashley Buller, assistant director of emergency preparedness. “We did everything we could to encourage them to leave.”

Officials said search missions and damage assessments would begin when conditions allow it.

More than 410,000 electric customers are without power in Texas and Louisiana, according to power-outage tracking website poweroutage.us. 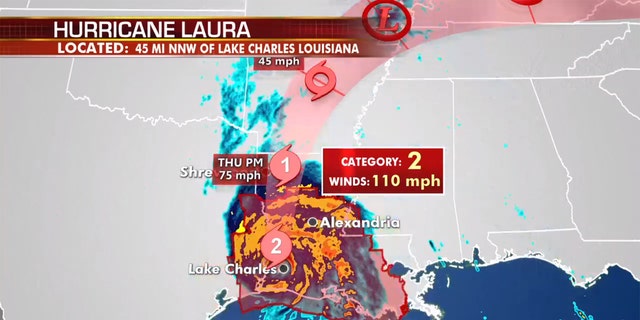 Laura, now a Category 2 hurricane as of 7 a.m. EDT,  will continue to move north and weaken on Thursday while still bringing the risk of strong winds, heavy rainfall, some storm surge, tornadoes, tree damage and power outages. 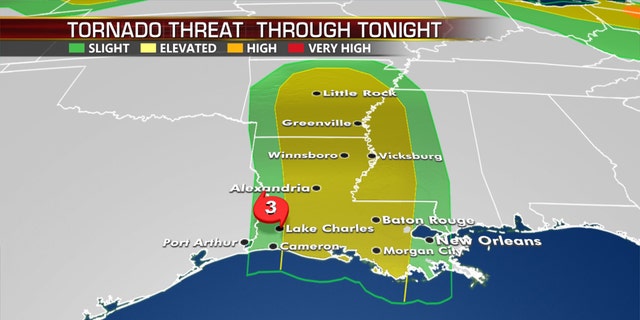 Rainfall totals of 5 to 10 inches, with isolated amounts of 15 inches, are possible over Central and Western Louisiana. 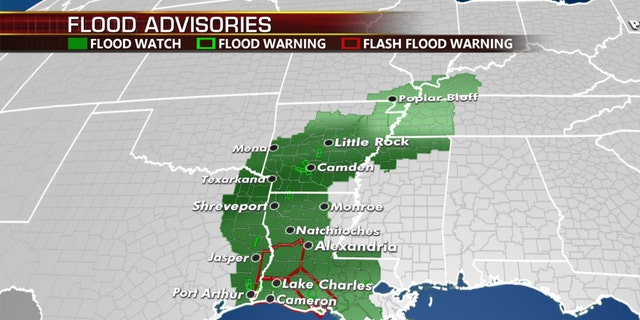 The flood threat on Thursday from Hurricane Laura.
(Fox News)

Parts of Arkansas will receive 3 to 7 inches, with isolated totals of up to 10 inches from the storm's heavy rains.

Locally heavy rain is also possible from the mid-Mississippi valleys into the Ohio and Tennessee valleys and the central Appalachians late Friday into Saturday. 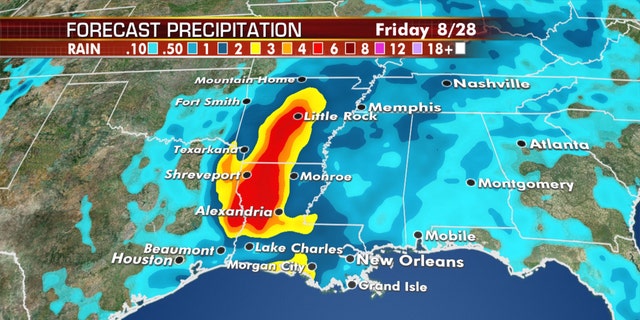 These areas could receive 2 to 4 inches of rainfall, with up to 6 inches in some spots.

The storm will still be with us Friday and even into the weekend bringing the risk for heavy rain, strong winds and thunderstorms into parts of the Tennessee and Ohio Valley then into the MidAtlantic and Northeast as a depression or post-tropical low.

Fox News' Brie Stimson and the Associated Press contributed to this report.