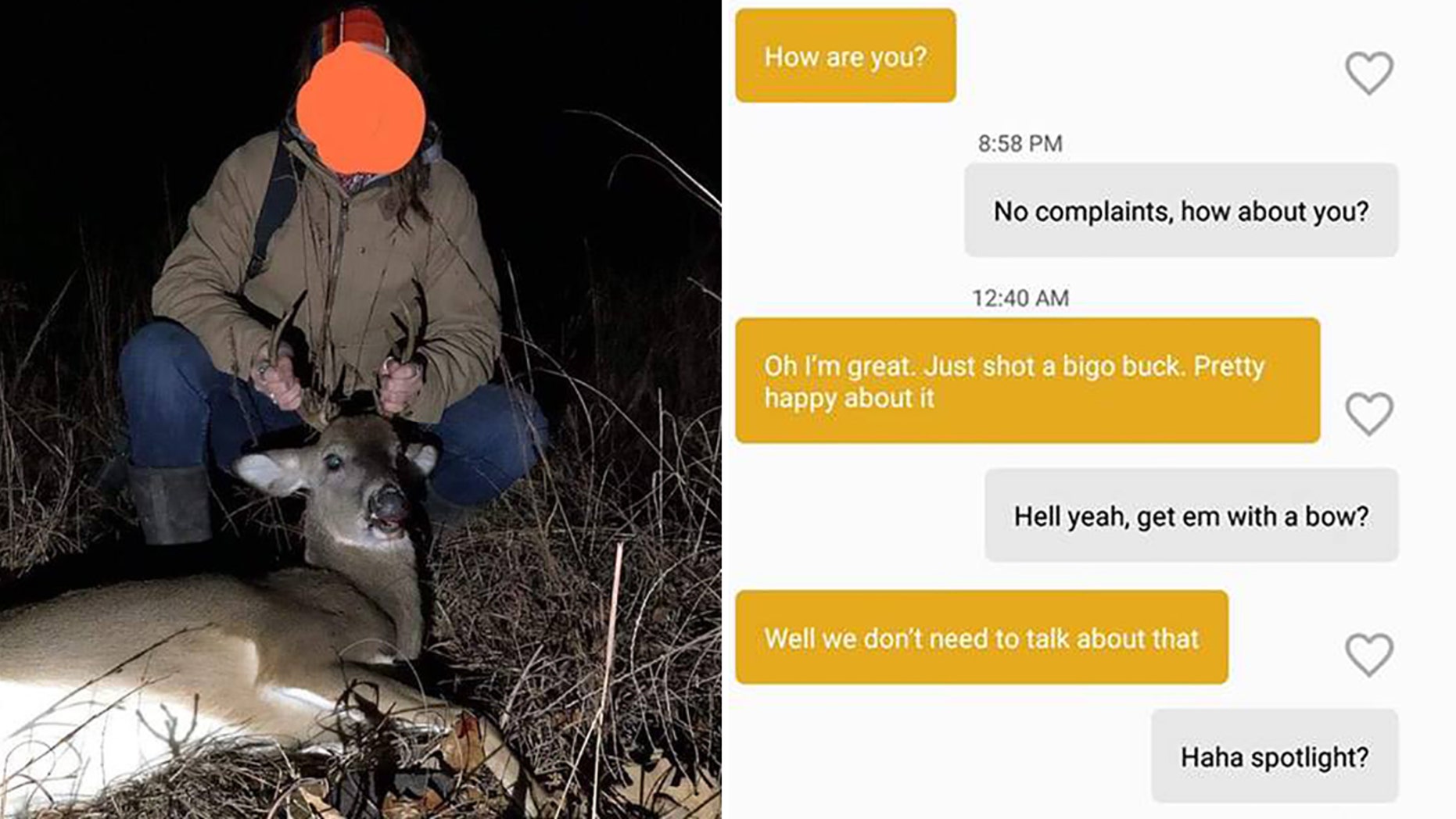 A woman faced a hefty fine after bragging about an illegal deer kill to a man — who turned out to be a state game warden — on a dating app last month, officials said. (Oklahoma Department of Wildlife Conservation Game Wardens)

An Oklahoma woman has been slapped with a hefty fine after showing off an illegal deer kill last month on a dating app to a potential suitor — who happened to be a state game warden.

The woman, whose name was withheld, unwittingly told Cannon Harrison, a 24-year-old McIntosh County warden, on the dating app Bumble that she had killed a “bigo buck,” the Oklahoma Department of Wildlife Conservation Game Wardens wrote on Facebook on Sunday.

“Honestly, the first thing I thought was that it was someone who was messing with me because they knew who I was,” Harrison told the Washington Post. “It seemed too good to be true.”

He decided to write back, “Hell yeah, get em with a bow?” A bow would have been a legal method of killing the deer.

“Well we don’t need to talk about that,” the woman replied.

“Honestly, the first thing I thought was that it was someone who was messing with me because they knew who I was.”

The season in which licensed residents could hunt with rifles had ended, making the act illegal, the Tulsa World reported. Gory photos posted to the game warden's Facebook page showed that only the head and back-strap meat were harvested, which is also illegal.

Harrison decided to investigate further and asked the woman if she had been "spotlighting" — an illegal act in Oklahoma in which a bright light is aimed into the animal’s eyes, freezing them in place, the Post reported.

Harrison was able to get the woman to admit to spotlighting, tell him where she shot the deer and send him a photo of her posing with her kill. He then used social media to narrow down his search for the woman’s identity, according to the paper. Game wardens arrived at her home the following day.

The woman and a companion pleaded out immediately to charges of improper possession of an illegally taken animal and taking game out-of-season, and paid $2,400 in fines, the World reported. She avoided further charges of wanton waste of meat and spotlighting.

“You can’t just ignore a broken law that falls right in your lap but was kind of a bummer,” Harrison told the World of his unsuccessful attempt at romance. “She said it was her first deer ever, too.”