Food fight! Moment hungry monkeys swarm over a box of bread in Thai city where thousands of macaques run riot

This is the astonishing moment dozens of hungry monkeys scramble over pieces of bread.

The plastic box packed with freshly-baked slices was left of the ground in Lopburi, Thailand, yesterday.

As soon as the primates noticed the meal, then swarmed around the box and shoved each other out of the way while clawing at the bread.

Monkeys in the city have been going hungry after tourists that would normally feed them stopped visiting the area due to travel restrictions during the Covid-19 pandemic. 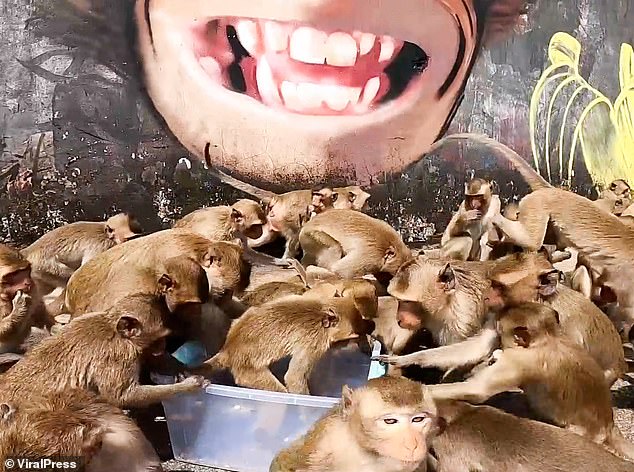 Dozens of monkeys in Lopburi, Thailand raided a plastic box filled with bread which had been left on the street of the popular tourist destination 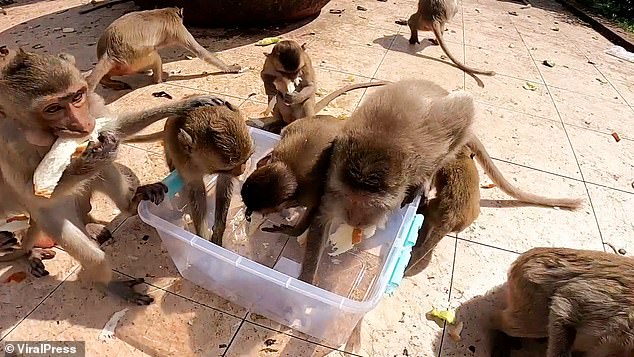 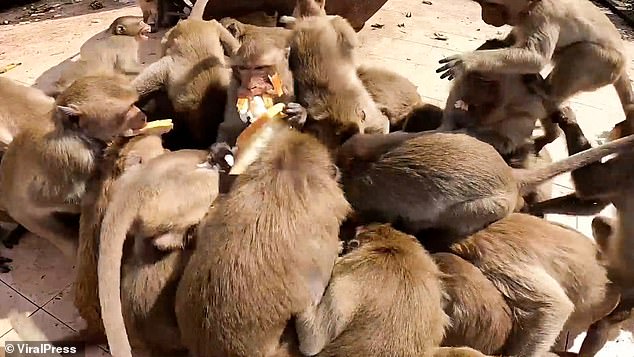 Before Covid-19, many of the monkeys  relied on tourists visiting the area for food

Locals who fed the monkeys sugary drinks were also banned, as the liquid was sending them creatures into a breeding frenzy leading to mass castrations as numbers surged.

The monkeys are now surviving on simple snacks being donated by Good Samaritans, who believe the animals are lucky.

An estimated 7,000 monkeys are living in Lopburi, where they roam freely among the city’s 70,000 residents.

Hundreds of tourists used to visit the area every day to feed the monkeys but the Covid-19 coronavirus travel ban introduced in March has stopped their source of food.

Following the drop in visitors, footage emerged showing the primates getting into a mass brawl over bananas after the supply dwindles. Since then, they were given sugary snacks and junk food by locals but the diet has made them breed faster and many have become violent.

Officials were left struggling to cope with the soaring monkey population and have started mass sterilization projects.

Supakarn Kaewchot, a government veterinarian, said: ”They’re so used to having tourists feed them and the city provides no space for them to fend for themselves.

”With the tourists gone, they’ve been more aggressive, fighting humans for food to survive. They’re invading buildings and forcing locals to flee their homes.”

More than 200 of the monkeys have been castrated in an effort to limit numbers.

Last month, a team of wildlife conservationists rounded up the animals, drawing them into cages with bait before knocking them unconscious with tranquilizers. 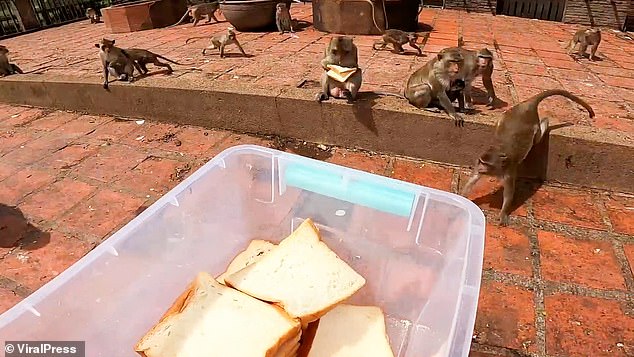 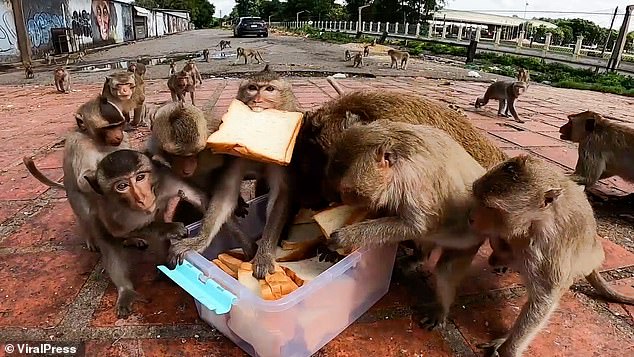 Around 500 of the 6,000 monkeys in the region faced the surgeon’s knife

The captured monkeys were marked with numbers so that they can be easily identified in future before being castrated.

Thung Tale Wildlife Conservation officer Suwat Suksiri said: ‘We had to have monkeys neutered because the residents said the more wild monkey population means the more problems and conflicts could happen between them.’

Earlier this year hundreds of the monkeys were sterilised in the central city of Lopburi after their numbers spiralled wildly out of control.

Officials there were seeking to neuter around 500 of the 6,000 animals after they terrorised locals as they engaged in mass street brawls over scraps of food and invaded shops.

People had sought to appease them with junk food, but the sugary diet turned them sex-crazed and they were breeding faster than ever.

Footage of hundreds of them brawling over food in the streets went viral on social media in March.

Their growing numbers – doubling in three years – have made an uneasy coexistence with their human peers almost intolerable.

Many areas have simply been surrendered to the marauding monkeys.