HUNDREDS of venomous Portuguese man o'war have washed up on beaches across Cornwall.

One woman said she was stung on her nose by a long tentacle, and feared her "nose was going to fall off". 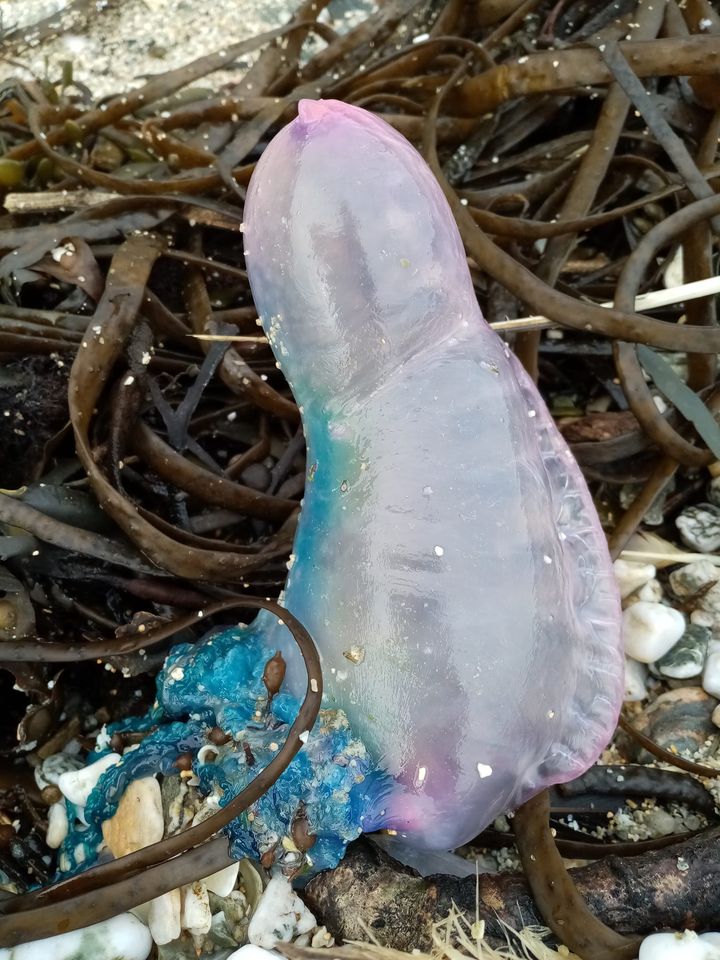 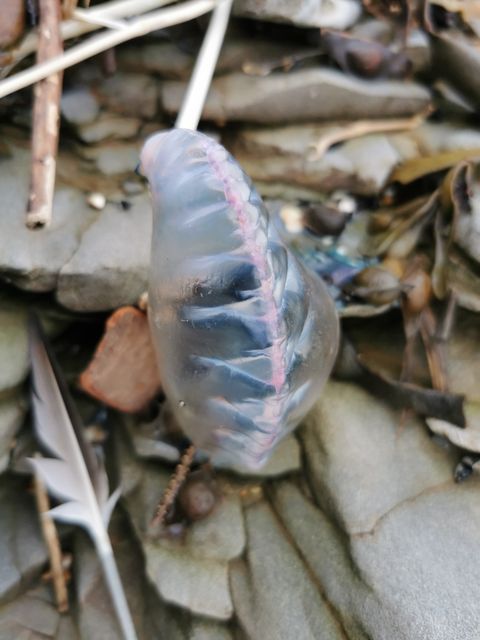 The pretty – but potentially lethal – blue, violet or pink-coloured marine creatures have been spotted stranded along the beaches of Treyarnon, Hemmick, Caerhays, Coverack, Castle and Gyllyngvase.

Portuguese man o'war – also known as the floating terror – have an extremely powerful sting that on rare occasions can kill.

They have been washing up on a daily basis among the high tide line with the seaweed, according to local beachgoers.

The Marine Strandings Network said: "We have had numerous reports of Portuguese man o'war (Physalia physalis) strandings taking place across Cornwall, brought in by the recent winds and weather.

"These intriguing creatures are NOT jellyfish, but are actually a colony of individual polyps dependent on each other for survival."

Lurking below the distinctive purple gas-filled floats are long strands of tentacles and polyps that grow to an average of 30 feet and may extend by as much as 100 feet. 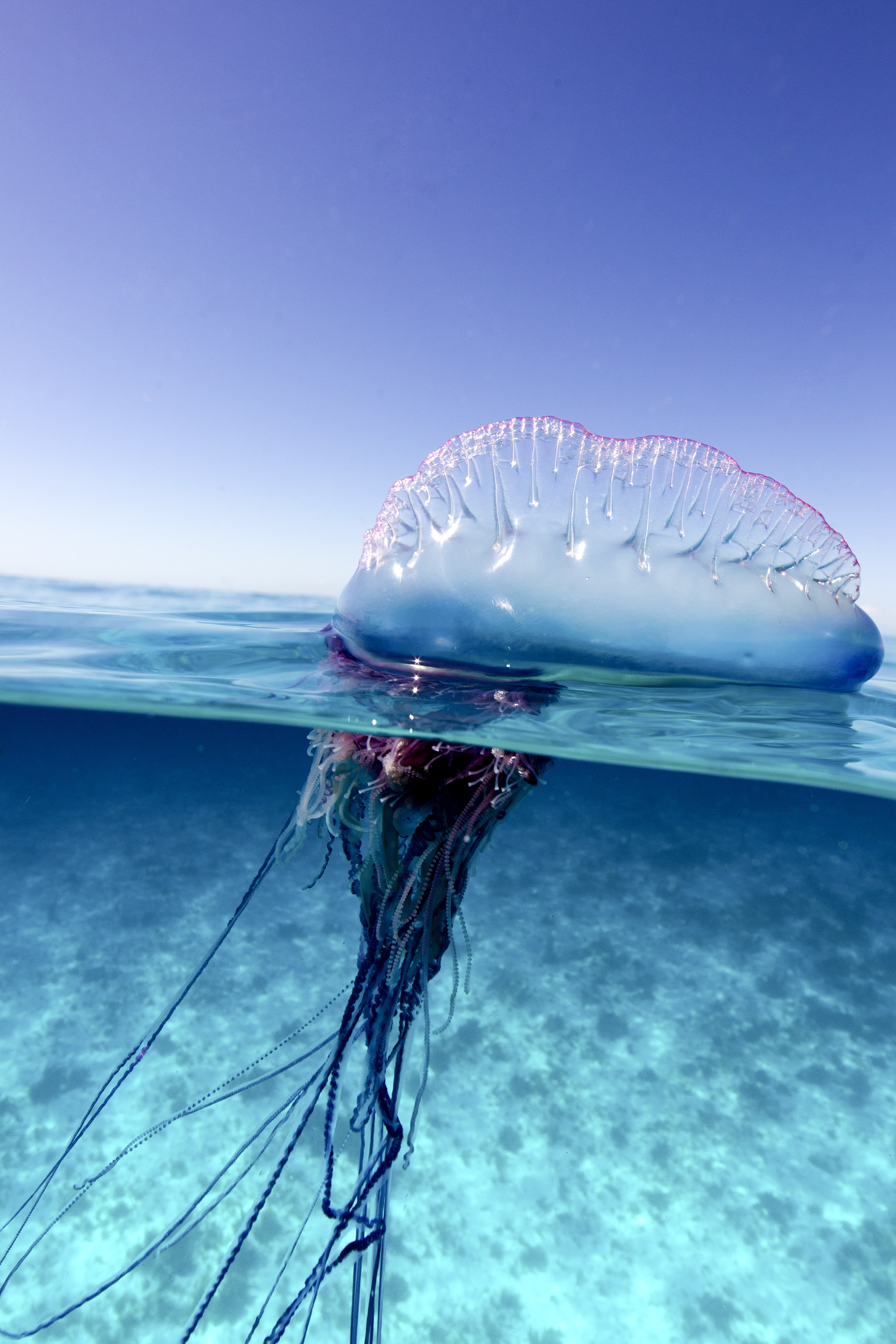 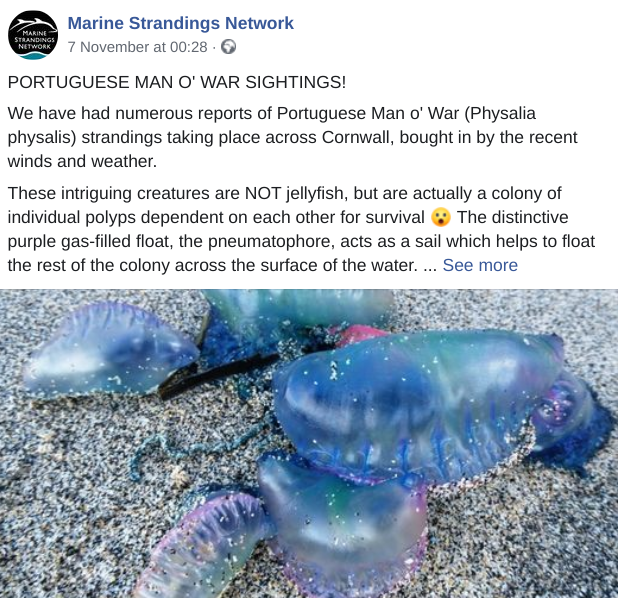 "If you do happen to come across any of these fascinating creatures, please make sure you do not touch and only admire from a distance," the network advised.

Lucy Hatfield replied on Facebook: "I was stung on the nose by a tentacle off Gyllyngvase… I thought my nose was going to fall off."

The sightings came days after a child was left in agonising pain after picking up a Portuguese man o'war.

In early November lifeguards issued a warning after the youngster was injured after coming across the sea animal while rock-pooling.

The child was hurt on Bantham Beach, near Plymouth, Devon, where lifeguards said more of the creatures are currently washing up.

Locals in Devon have spotted them at Bantham Beach, Whitsand Bay and Bovisand Beach.

A spokesperson for the RNLI said: "We're advising to avoid them in particularly their blue tendrils which can inflict some excruciating pain when touched."

The NHS recommends that if you are stung by a Portuguese man o'war, you should rinse the affected area with sea water and remove spines from the skin with tweezers or a bank card.

Do not pour on vinegar, pee on the sting, apply ice or a cold pack, touch any spines with your bare hands or cover or close the wound.

Do soak the area with very warm water, take over the counter painkillers and most importantly, get help straight away as stings can result in severe dermatitis and in rare cases can be deadly.

Earlier this year hundreds of the deadly creatures were blown onto English beaches by Storm Ciara.

What is a Portuguese man o’war?

Beachcombers be warned: a man o’war may still sting you even WEEKS after having washed ashore.

But is actually a species of siphonophore, a group of animals that are closely related to jellyfish.

Each of the four specialised parts of a man o’ war is responsible for a specific task, such as floating, capturing prey, feeding, and reproduction.

Found mostly in tropical and subtropical seas, men o' war are propelled by winds and ocean currents alone, and sometimes float in legions of 1,000 or more!

The US National Ocean Service says: "Resembling an 18th-century Portuguese warship under full sail, the man o’ war is recognised by its balloon-like float, which may be blue, violet, or pink and rises up to six inches above the waterline."

Lurking below the float are long strands of tentacles and polyps that grow to an average of 30 feet and may extend by as much as 100 feet.

These are microscopic capsules loaded with coiled, barbed tubes that deliver venom capable of paralysing and killing small fish and crustaceans.

While the man o’ war’s sting is rarely deadly to people, it packs a painful punch and causes welts on exposed skin. 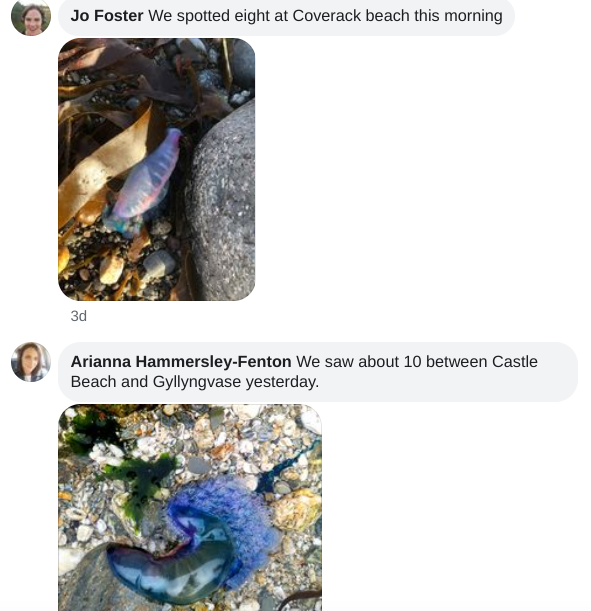 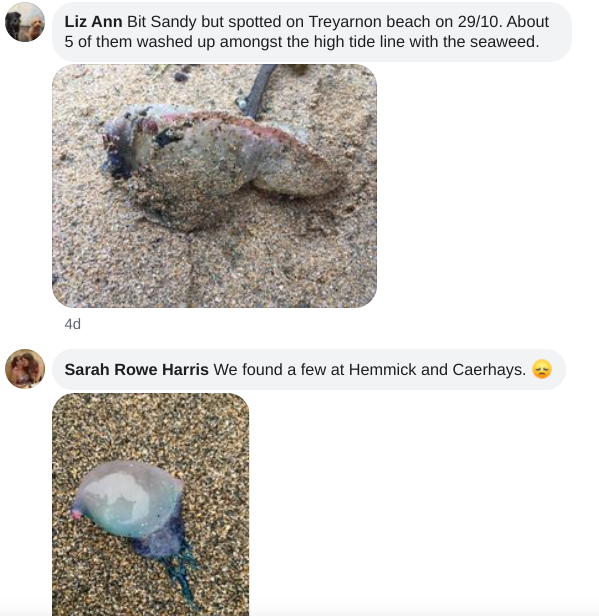