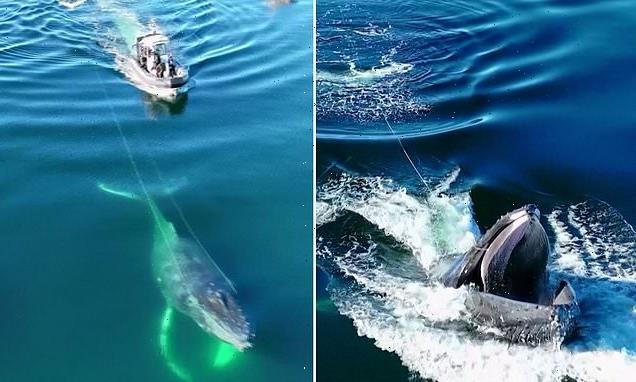 Whale, whale, whale! Incredible video shows humpback whale pull off nifty move to free itself from the ropes of a buoy in Canada after being stuck for two days

A humpback whale seen off the Pacific coast of Canada has pulled off a stunning move during a rescue mission after it put itself in danger by getting caught into fish nets for two-days-long.

The whale was trying to shake off the ropes of a floating device in the Strait of Georgia, off of Texada Island, near Vancouver, British Columbia, on October 14 when it was noticeably struggling to move forwards.

Fisheries and Oceans Canada managed to come to the animal’s help, as its Mammal Rescue team tracked it down with its aerial drone. The warm-blooded mammal was with two other humpbacks at the time.

Rescuers had to slow the whale down by using some pull after it unsuccessfully attempted to break 300 feet of rope that was entangled in its mouth, Paul Cottrell, who acts as a Coordinator for the rescue institution, told the BBC.

The mammal felt the extra weight of the rope attached to it by the Canadian governmental agency and stunned witnesses by doing a rare backflip, drone footage shows. 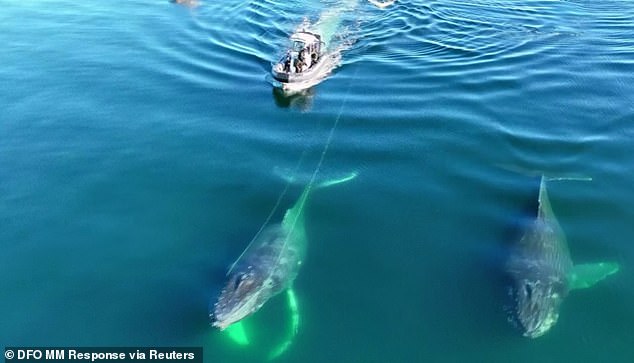 A humpback whale was caught in 300 feet of fish nets off the coast of Texada Island in British Columbia, Canada, according to the Fisheries and Oceans Canada.  It was swimming with two other humpbacks at the time 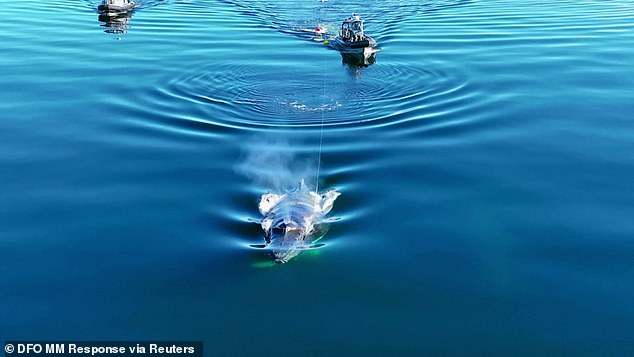 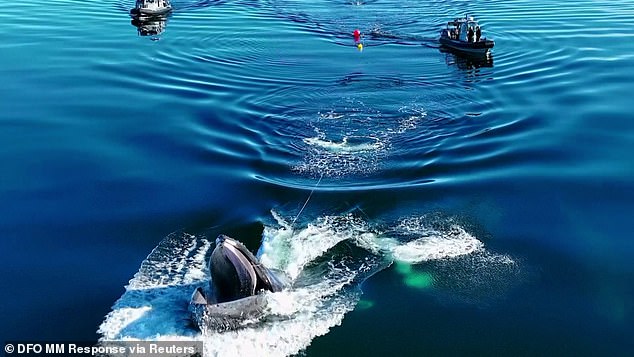 WHALE, THAT’S INCREDIBLE: The whale performed a back flip, in a rare move called spyhopping, to set itself free

The appropriate term for the move is ‘spyhopping,’ which consists of a vertical half-rise out of the water performed by a whale in order to view its surroundings, according to Dictionary.com.

‘And all the gear came flying out and the animal took off with its companion animals,’ Cottrell told the BBC.

The move certainly helped and the whale eventually managed to shake off the burden of both ropes, but assisters kept on following the creature to make sure it roaming freely.

Cottrell said only an ‘energetic’ whale would perform such a rare move, and was relieved to see it swim away with its herd.

‘We were like, ‘Wow, this is something we have never encountered,” Cottrell added.

‘The team was overwhelmed with just happiness,’ the Canadian added. ‘It was just amazing.’ 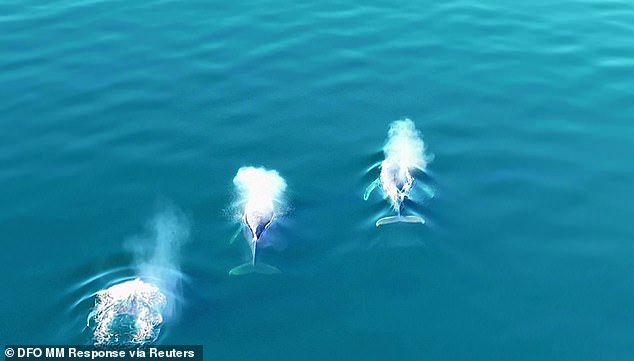 Following its aerobics, the whale managed to freely swim off Canada’s western coast once again along with two other companions 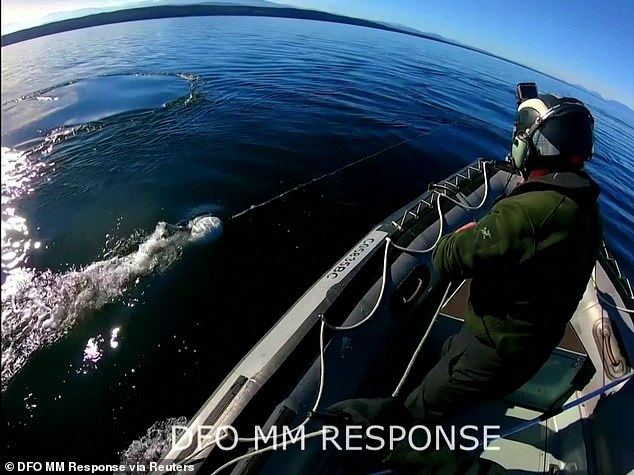 ‘The team was overwhelmed with just happiness,’ Paul Cottrell, spokesperson of Fisheries and Oceans Canada said of the rescue team’s experience saving the mammal. ‘It was just amazing’

The meticulous mission last a total of ‘four to five hours,’ as rescuers had to make sure they weren’t hurting the whale while cutting off the fishnets.

Humpback whales can grow up to 62 feet long and weight up to 53 tons. They are popular with whale watchers because of their acrobatic displays — including spectacular breachings in which they launch their school-bus-size bodies entirely out of the water and slap the surface with their pectoral fins or tails.

These mammals are often found along the Pacific coast line, from California to Canada, to feed in the summer and fall before migrating south to breeding and birthing grounds off the coast of Mexico. 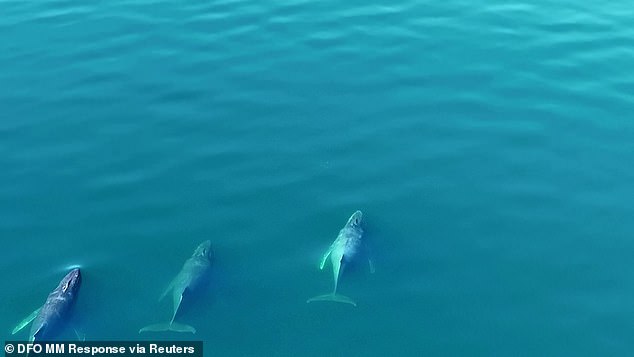 Humpback whales are among the world’s most endangered types of mammals, with only an estimated 35,000 to 40,000 left

They are among the world’s most endangered whales with an estimated 35,000 to 40,000 remaining, including 2,900 that frequent the coasts of Washington and Oregon other than The Golden State, according to the Marine Mammal Center.

In the US, it is a federal crime to approach a humpback whale and the Canadian- government-backed-response-team would have had to operate under a special federal permit.