PASSING motorists screamed obscenities and threw bottles of urine at Megan Phelps-Roper and her family as they waved placards scrawled with homophobic messages by the roadside in Topeka, Kansas.

At the time in 1991, Megan couldn't understand why people so passionately hated the messages of her grandfather's ministry, the Westboro Baptist Church – she was just five years old. 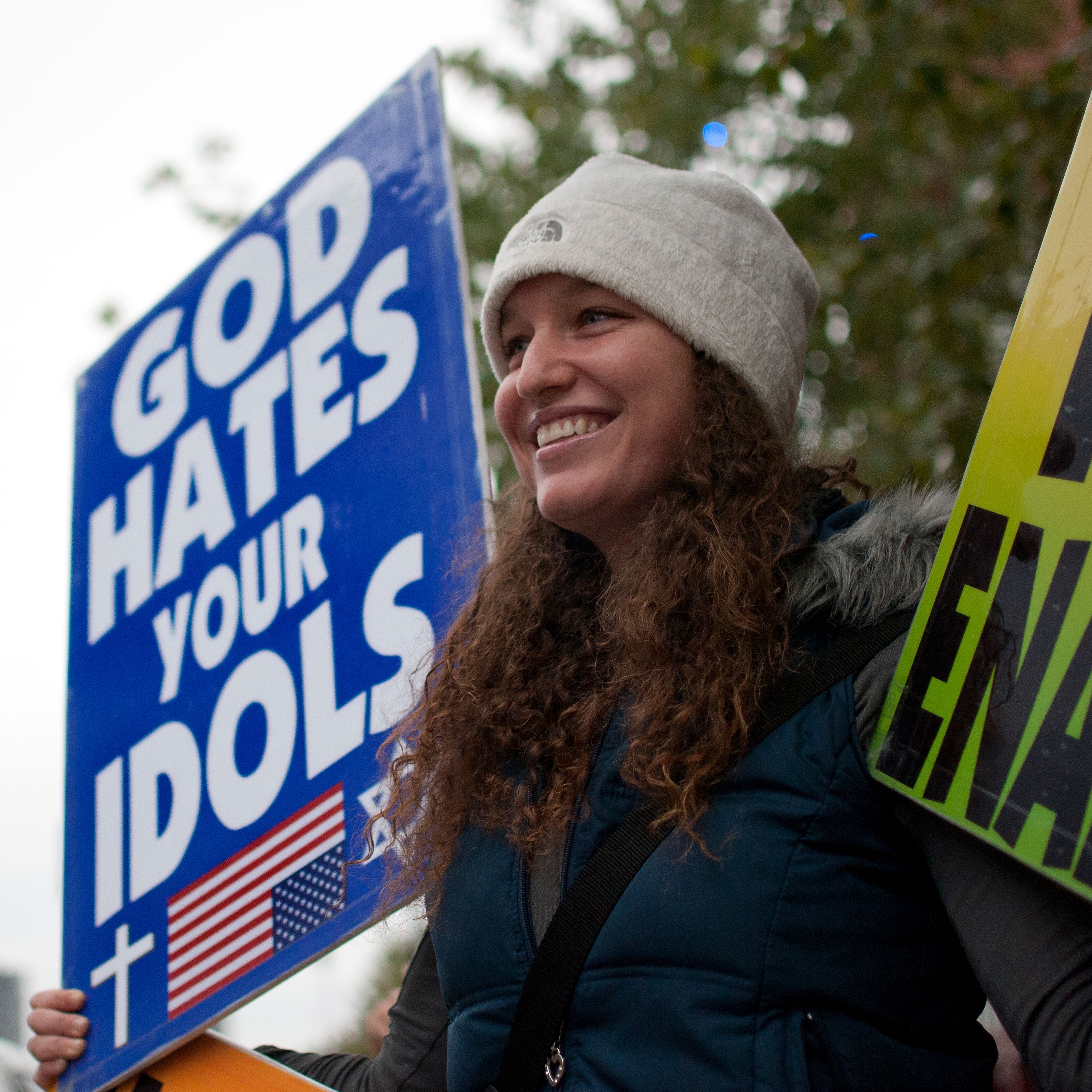 But over the following decades Megan, now 34, would become one of the church's staunchest firebrands, participating in some of its notoriously despicable shock publicity tactics at the instruction of her older relatives.

Members of the church would travel across the US to picket the funerals of soldiers killed in Iraq and Afghanistan with signs reading "thank God for dead troops" as bereaved families laid their children to rest – Westboro followers said God was punishing them for America's tolerance of homosexuality.

And their hardline anti-gay rhetoric, summed up in their famous slogan "God hates f**s", drew violent reprisals from the local community, even landing church members in hospital.

But in 2012, after nearly 27 years in the extreme church, Megan decided to leave for good – causing her to be permanently exiled by her family. 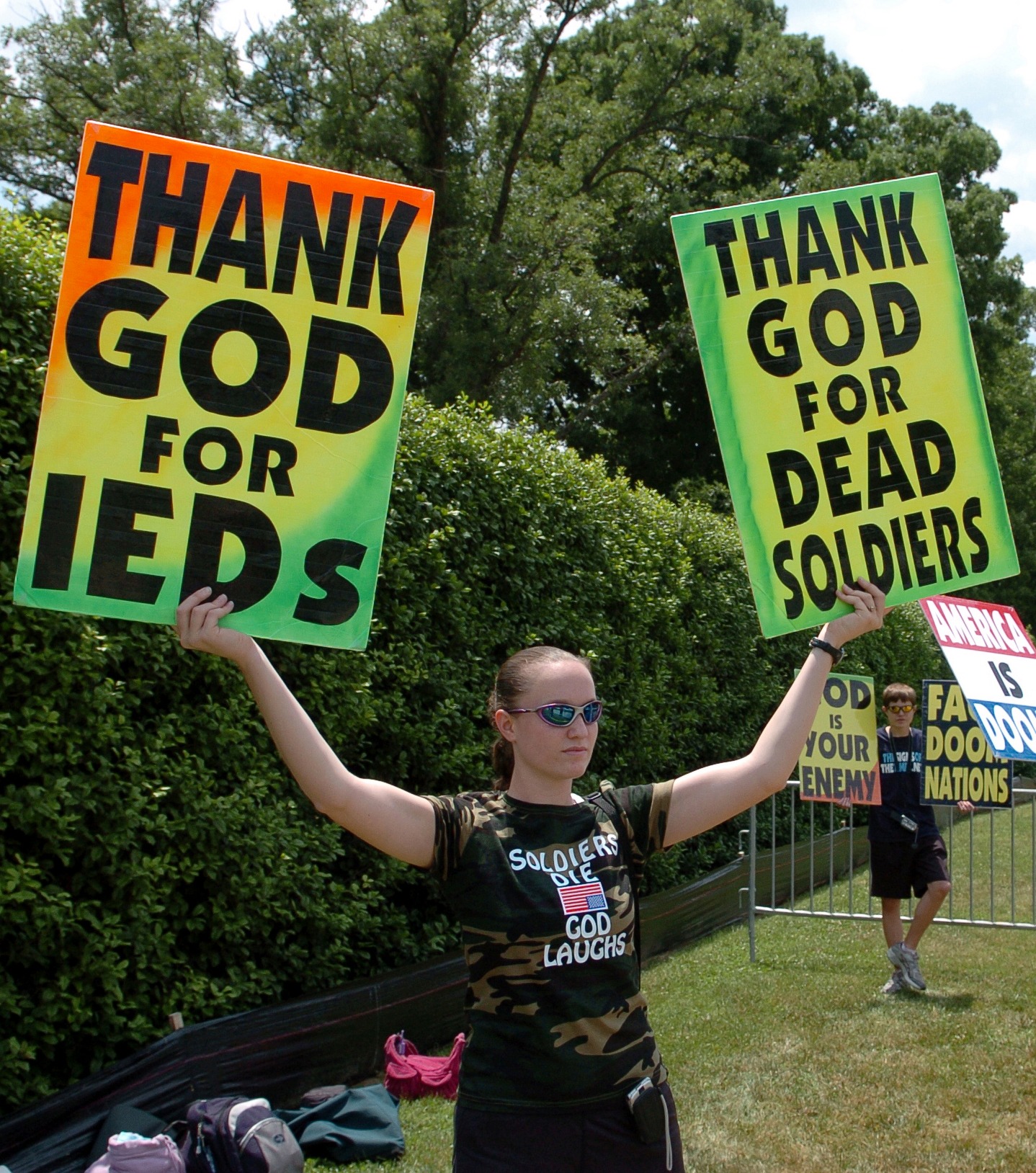 Megan now speaks out against the church's extremist teachings, and warns of the dangers refusing to consider the views and humanity of people you disagree with.

"When you feel righteous indignation, you feel morally inflamed about how wrong things are, it makes it much more difficult to take a step back and stay calm and be engaged with what the other side is saying," Megan tells Sun Online.

"You can try to use force, but what is actually going to bring about lasting change is to reach hearts and minds."

For Megan to escape the extremist doctrine of the Westboro Baptist Church, she would also have to turn her back on her family forever.

The church, which was headed by her grandfather Fred Phelps, found its most vocal spokesperson in Megan's mother, Shirley, who would ultimately end up cutting all contact with four of her own children for leaving the cult-like group. 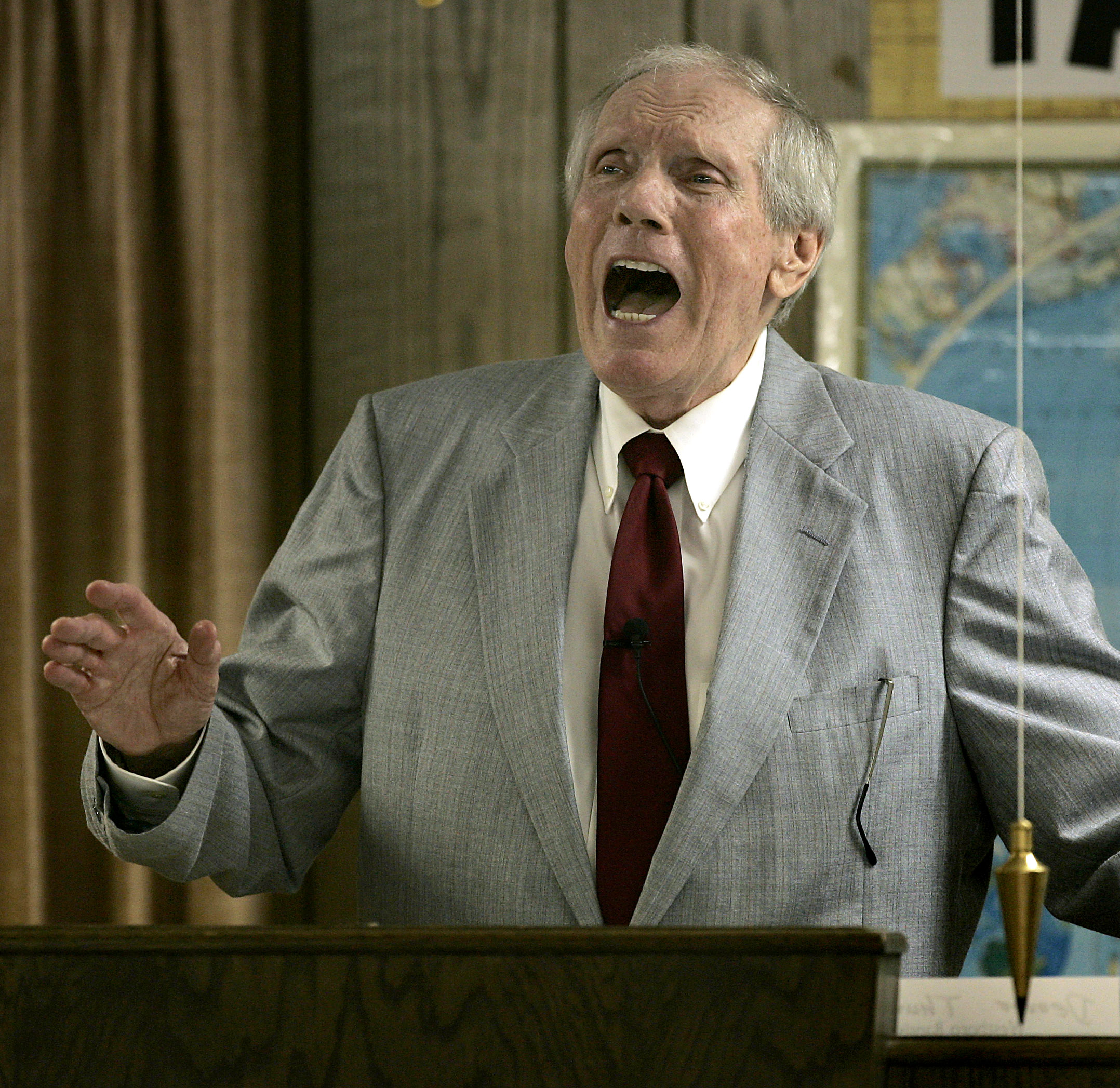 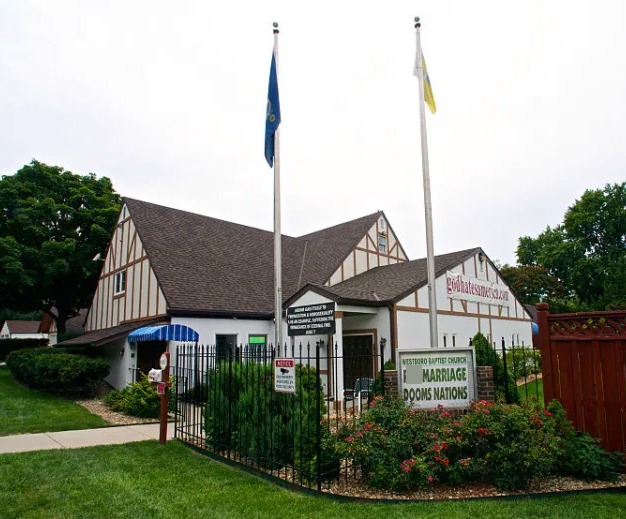 Fred, who died in 2014, started the picketing that would come to define the church in response to finding out about gay people looking for anonymous sex in a local park.

From there, Westboro's hardline homophobic messaging would attract more and more attention – and revulsion – from around the world, with messages like: "Thank God for AIDS!"

"We used to use the most caustic language, taking the most controversial message and stands, and do anything that would get the message out," Megan says.

Megan, who was the eldest of nine siblings, was regularly interviewed by journalists trying to understand the church's extreme actions, actions which led to Westboro being designated a hate group by several advocacy groups.

Some of the most important media appearances for Megan were the three films which Louis Theroux made about the church, which described Megan and her loved ones as "the most hated family in America". 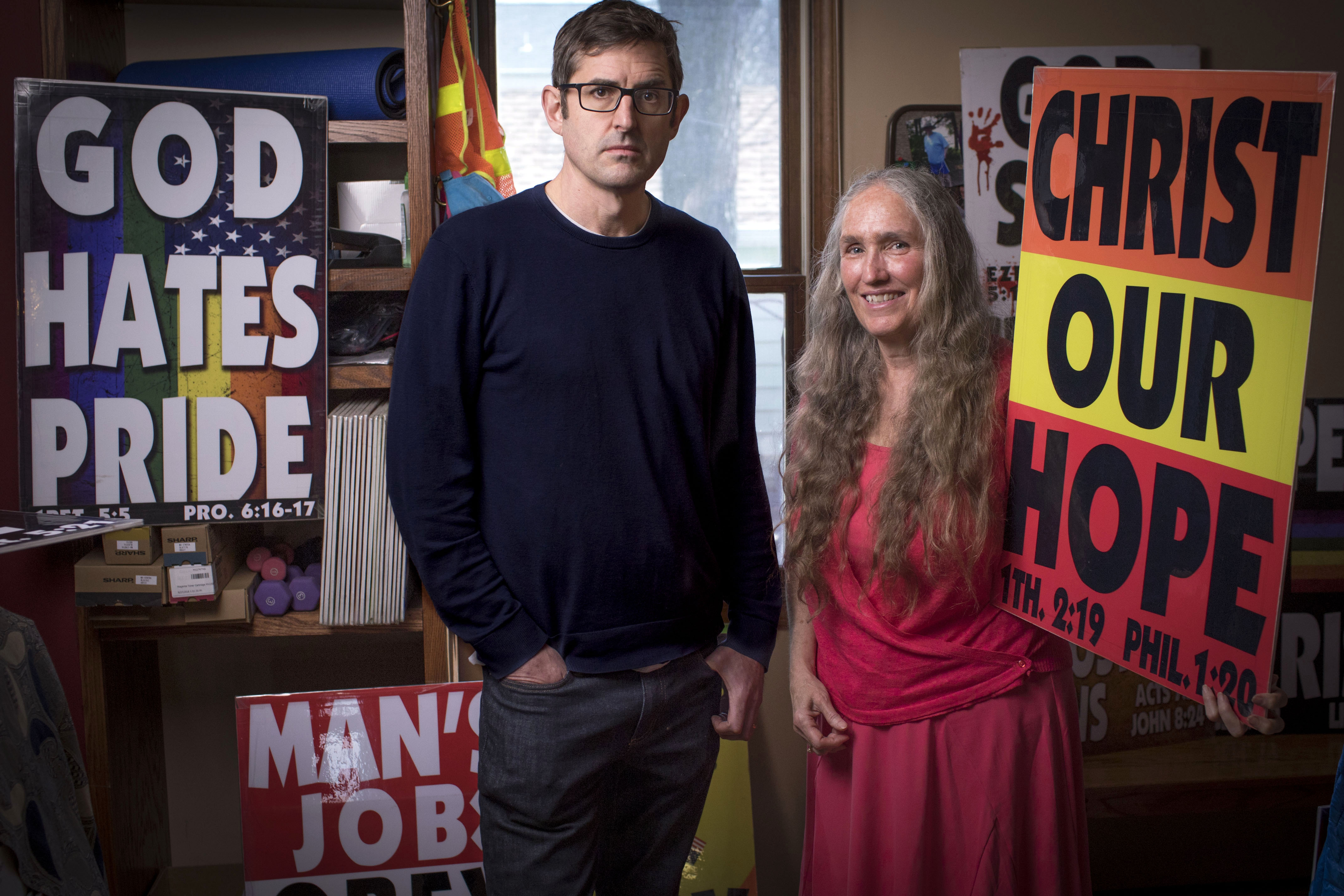 Megan and Louis are now good friends, but she recalls a painful moment between them during his second spell with Westboro in 2011.

"At that point he’d seen the devastation, and how Westboro hurt its own members far more than it hurt anybody else," Megan says.

"In other people’s lives, they’re these horrible moments, but they’re short, generally, at these protests. For members, it can consume their lives.

“I think he had just spoken to my cousin Libby who had left, and my friend Lauren Drain [who was expelled from the church].

"So he had seen that, and he was a little distant and surly. I remember being so sad. Everybody came to say goodbye, like the rest of the crew, but he just stayed in the car.” 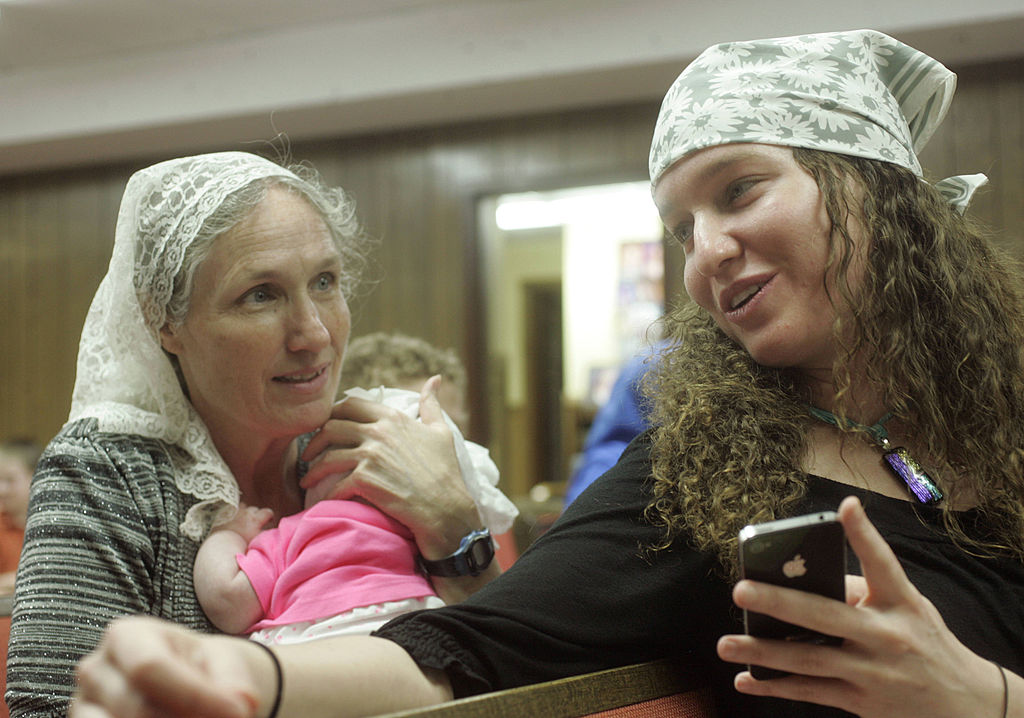 Megan's life, too, had been consumed by the brutal Westboro philosophy of discipline and obedience to church doctrine.

That involved being beaten by her mother with a wooden paddle as a child.

"That was really hard to live sometimes," Megan says. 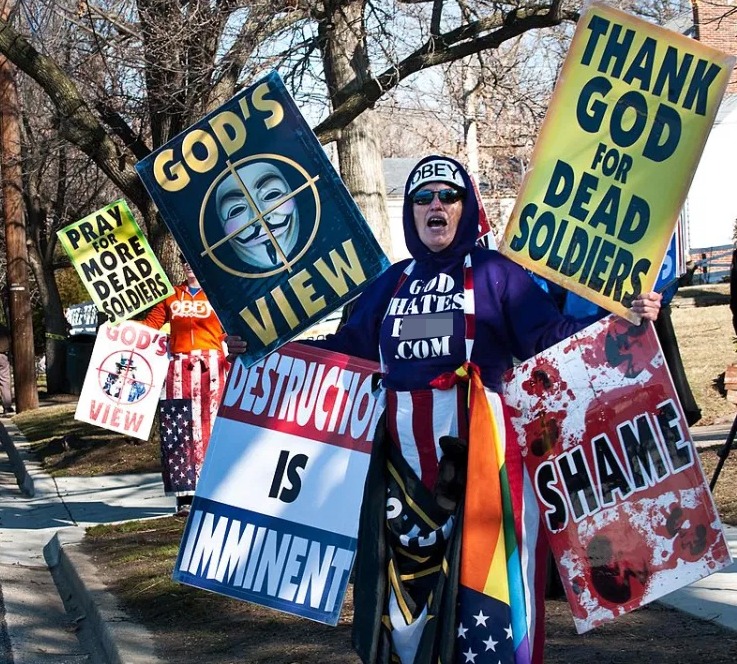 As well as being violent with his own children, Fred made them run 10 miles every day, with a 26-mile run on Saturdays.

But it was arguing with people about her beliefs on Twitter, rather than the ferocity with which the church defended its doctrine, that ultimately led to Megan wanting to leave.

Like all other members of the church who leave, Megan has been completely cut off from her family since her departure in 2012. 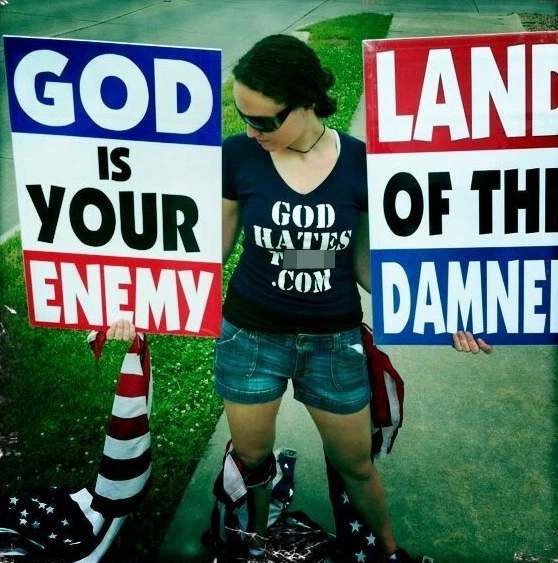 “I can see photos of them sometimes on Twitter when they post them. But they can’t really tell you how they’re doing as human beings, and not just as plaque-holders."

Despite the painful wall of silence Megan's been met with by her family, she now passionately advocates for trying to understand and empathise with people with whom we radically disagree.

And with political polarisation spreading, Megan has been alarmed by seeing the same kind of dogmatic ways of thinking she was raised with in different domains of life. 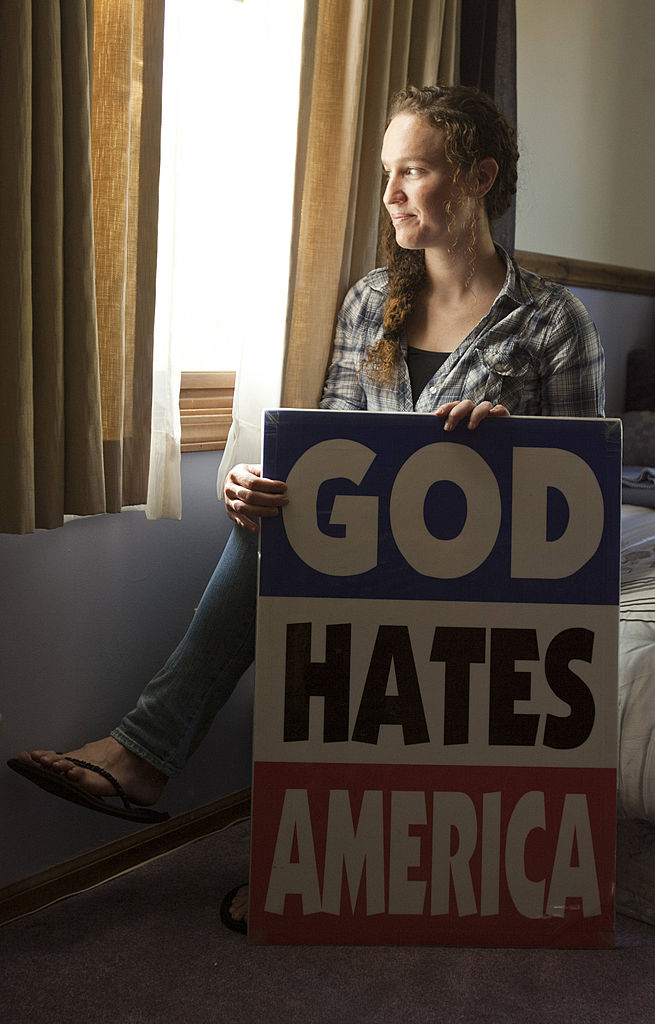 "I see the parallels all the time," she says. "Some people will get upset at the comparison because they’ll think: ‘No, the ideology I have is the right one’."

But despite the toxicity of the public conversation, Megan takes hope from how she was able to leave her extremist upbringing and change her life.

In 2016 she married Chad, a man who'd argued with her on Twitter while she was still in the church, and they had a daughter together, Sølvi, two years later.

“I absolutely do feel hopeful," Megan says. "I almost feel like a prisoner to hope.

"Even when things look incredibly bleak, and I might have an incredibly dark moment, I can’t help but remember what I come from.

"How drastically my life changed in a relatively short amount of time, like three years from the time I got on Twitter until the day that I left. That is unreal, how much my life and mind has changed.

“I owe that same hope and grace to other people.”

Unfollow: A Journey from Hatred to Hope by Megan Phelps-Roper is published by Quercus.