London: The US space agency NASA is looking into repurposing satellites that are already in space to hunt for aliens. 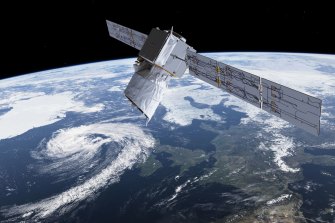 NASA said it was looking into whether existing satellites could be used to monitor for UFOs.Credit:ESA/ATG/AP

The inquiry is being led by Dr Thomas Zurbuchen, of NASA’s Science Mission Directorate, who has now begun investigating whether satellites in orbit could be repurposed to give another view on strange aerial phenomena reported from Earth.

Speaking to journalists in London this week, Col Pam Melroy, deputy administrator of NASA, said: “One of the big questions Thomas asked is, ‘We have a ton of satellites looking down at the Earth; are any of them useful?’

“Before you build a rover that’s going to Mars, you ask yourself, ‘What’s the sensor I have to build to detect the most interesting thing?’ How would you get the evidence that you need to be able to determine if it’s an optical phenomena or some other kind [of phenomena]?”

Bill Nelson, NASA’s administrator, told reporters that he had read all the classified documents relating to UFOs and was convinced that nobody knew what they were. 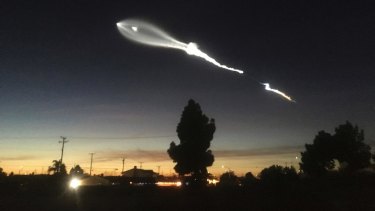 The contrail from a SpaceX Falcon 9 rocket is seen from Long Beach, California, in 2017. Credit:AP

Asked why NASA was embarking on such a fringe subject, Nelson said one of the agency’s remits was to hunt for life outside Earth. He pointed out that in the past, even the greatest scientists had been disbelieved or ridiculed, including Galileo – condemned in the 17th century for saying the Earth revolved around the Sun – and Edwin Hubble, who in the 1920s proved many objects thought to be clouds of dust and gas were galaxies.

“One of our missions is to reach out to see if there is life – that’s why we are digging on Mars right now,” he said. “Is there the possibility of life in something as big as the Universe? Of course there is the chance that, in somewhere as big as that, conditions similar to Earth existed, and some other kind of life form developed.

“Look at what Galileo had to face… and 100 years ago we still only thought there was one galaxy, and then Hubble came along and suddenly said, ‘No there are a bunch of galaxies out there’.”

Last June, the Pentagon’s Unidentified Aerial Phenomena Task Force (UAP) released a report into 144 UFO incidents between 2004 and 2021, many of which were spotted by military pilots. Even though investigators concluded there was no evidence that the objects came from outer space or a foreign adversary, they said most could not be explained.

The report authors said there was no doubt that the UAPs were physical objects, rather than optical illusions caused by atmospheric conditions or sensor malfunctions.

“I went to our chief scientist and said… we’re the scientific research agency and one of our missions is to look for life… there’s this phenomenon going on, so we should approach it from a scientific point of view,” said Mr Nelson.

Last year, US Navy pilot Lt Cmdr Alex Dietrich revealed that she had seen multiple UFOs while she was stationed off the coast of southern California on the USS Nimitz aircraft carrier in 2004.

They moved impossibly fast, she said, dropping a distance of more than 24,000 metres in less than a second and jumping dozens of kilometres in seconds, in an incident caught on infrared camera and radar.

According to reports, Cmdr David Fravor, also stationed on the USS Nimitz, engaged one of the oblong objects, which he estimated to be 12 metres in length. It disappeared, only to be picked up seconds later on ship radar 100 kilometres away.

Nelson said he had spoken to both pilots and believed their stories. He added that if the objects were real and not an optical illusion, he hoped they did not belong to an adversary as “they’ve got some real advanced technology”.