Washington: As Dolly Parton tells it, her first-ever car accident in October 2013 was minor, but left her bruised and sore enough to seek medical advice at Vanderbilt University Medical Centre.

That's where she met Naji Abumrad, a physician and professor of surgery. Abumrad knew next to nothing about the beloved megastar with big, blond hair, but he soon befriended her because he deeply enjoyed their talks about current events and science.

Their bond of nearly seven years received worldwide attention Tuesday after it was revealed that Parton's $US1 million donation to Vanderbilt for coronavirus research, made in honour of Abumrad, partially funded the biotechnology firm Moderna's experimental vaccine, which a preliminary analysis released this week found is nearly 95 percent effective at preventing the illness. 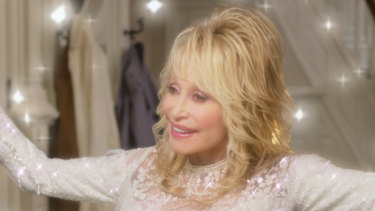 Country music luminary Dolly Parton had a role in the early funding for a coronavirus vaccine.Credit:Netflix

In an interview with The Washington Post, Abumrad recalled how Parton's curiosity about Vanderbilt's coronavirus research led to a gift that helped fund the vaccine that could be one of two available in the United States on a limited basis by the end of the year.

Among the agencies and universities listed as funding sources for the Moderna vaccine was "the Dolly Parton COVID-19 Research Fund," which left some on social media joking about singing the refrain of her hit "Jolene" replaced with the word "vaccine."

The doctor said he was elated over his friend's contribution to the early stages of a vaccine that eventually received nearly $US1 billion in federal funding.

"Her work made it possible to expedite the science behind the testing," Abumrad, 76, said on Tuesday night. "Without a doubt in my mind, her funding made the research toward the vaccine go 10 times faster than it would be without it."

Speaking to NBC's Today show on Tuesday, Parton, 74, expressed gratitude to those working tirelessly for a vaccine to help stop a pandemic that has killed at least 247,000 people in the United States.

"I'm just happy that anything I do can help somebody else, and when I donated the money to the COVID fund, I just wanted it to do good," she said. "Evidently, it is. Let's just hope we find a cure real soon."

Their friendship may seem unlikely, bonding a Lebanese-born physician and a cultural tour de force who ended up building an amusement park graced with her own name. But after the car crash, the pair found out they were both poor, mountain kids trying to get by, though they were raised more than 6000 miles (9600 km) apart. Abumrad said Parton became someone he could confide in.

"Our homes were almost identical where we grew up," Abumrad said.

The physician's son, Jad Abumrad, at first didn't believe his father whenever he talked about his friend Dolly. Even when the physician's phone rang and the name that came up was "Dolly Parton," he remained sceptical of his stoic father's claim of having the famous friend.

"It's not that I thought he was lying, but it's just such an odd thing," said Jad, 47, in a text message. "He's not the type of guy who hangs out with the Dolly Partons of the world."

The true test came when Jad, host of the nationally syndicated Radiolab, wanted to interview Parton for the show and asked his father for an introduction. By the time the father and son walked into Parton's headquarters in downtown Nashville, Jad's doubts dissolved.

"That's when I thought, 'Well, okay, he actually DOES know Dolly,'" Jad recalled. That first meeting sparked the 2019 series, Dolly Parton's America, a nine-part special exploring her impact on music and the world, and the singer's ability to bridge society's deepest divides.

When Parton asked Naji Abumrad toward the beginning of the year about coronavirus, she wanted to learn as much as she could about what was being done to study the virus, the physician said. Abumrad told her about "exciting developments" made on early vaccine research by a team at Vanderbilt led by Mark Denison, a physician and professor of pathology, microbiology and immunology.

Shortly thereafter, with the nation in the first weeks of lockdown, Parton wanted to do her part to help. She announced her seven-figure gift for coronavirus research on April 1, making the donation in honour of Abumrad – "My longtime friend."

"Honestly, I never had to ask for her support for the research," said Abumrad, calling his friend "the kindest and most philanthropic human being" he's ever known. "She's the one who suggested it."

Though the promising news surrounding the Moderna vaccine was far from an individual achievement, Denison told the New York Times that Parton's $US1 million donation went a long way toward funding the "critical" early stages of research and testing.

"Her money helped us develop the test that we used to first show that the Moderna vaccine was giving people a good immune response that might protect them," Denison said.

The major reaction this week to Parton's role in the vaccine has left the two friends overwhelmed, said Abumrad, but it has also reaffirmed his belief in science's role to help as many people as possible.

Now a firm believer in his father's friendship with Parton, Jad Abumrad said he's probably not the only one thankful for the "weird luck" that brought them together years ago.

"He's spent his entire life dedicated to helping people. And she's famously the same," he said. "Every day, their partnership makes a little more sense to me."