Beijing: In these tense times of super power rivalry, the Chinese government's English-language China Daily is closely watched in Washington for Beijing's line.

The newspaper is a major propaganda tool in China's influence arsenal, but it's little known that it was started with funding from the Australian government and a commercial partnership with The Age. 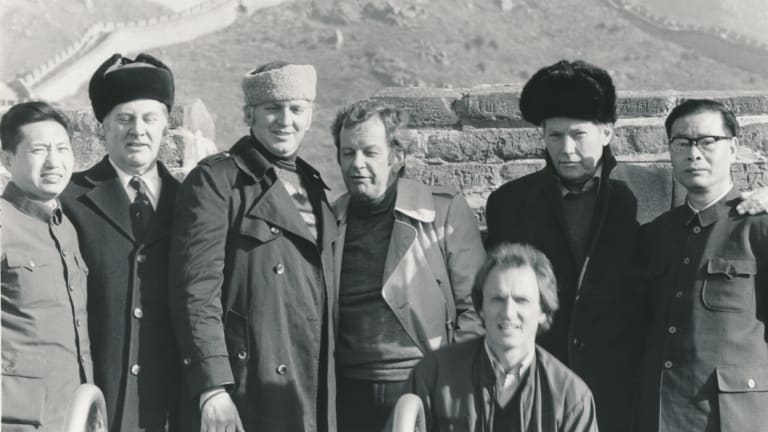 China Daily began publishing in 1981, with the assistance of Australian grants, after a deal between Beijing and the newspaper's owner David Syme & Co.  At the start, it struggled to get Chinese permission for even a company bicycle.

Forty years ago, top Chinese leader Deng Xiaoping had started his market reforms, opening China to the world after the death of Mao Zedong. At the same time, the relationship with Australia, started under the Whitlam government, was developing. The Fraser government established the Australia China Council to bridge a big knowledge gap about China.

A new book to be launched this week in Beijing by Australian ambassador Jan Adams and council chairman Warwick Smith, records the first 40 years of the Australia China Council.  Its author, ANU researcher Paul Farrelly, said he was surprised to learn about China Daily's links to Australia.

In the book, novelist Thomas Keneally, one of the council's founding members, recalls visiting China to discuss the China Daily plan.

One of the council's first big projects was bringing journalists from the Communist Party paper, the People's Daily, including deputy chief editor Jiang Muyue, to The Age  in Melbourne for "technical training". 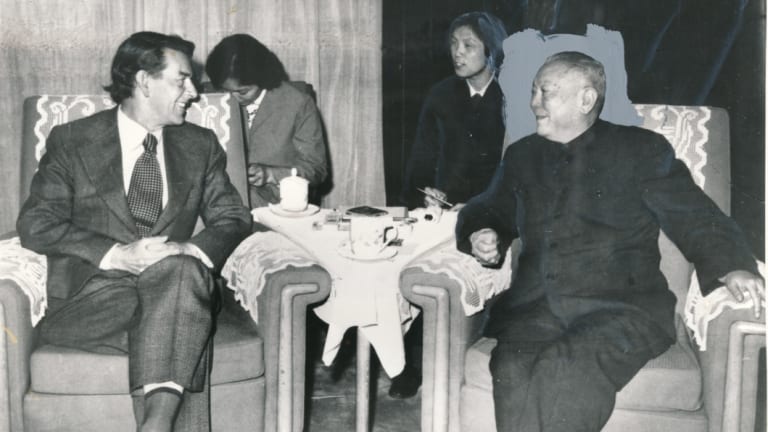 The council's 1980 annual report states the visit, costing $16,500, was "in connection with the project of the People's Daily and The Age to bring out a new English-language daily paper in China".

The Age sent its training supervisor John Lawrence, a compositor, and engineers who installed modern computerised typesetters from Victoria in the People's Daily compound in Beijing in late 1980. David Syme & Co had earlier struck a deal to sell the international advertising for China Daily for commission.

The Age's then special projects manager Jack Beverley says there was no advertising in Chinese newspapers at the time, so the deal – to generate revenue from a Chinese newspaper – broke new ground. The Age also shared its experience of how to distribute a newspaper. 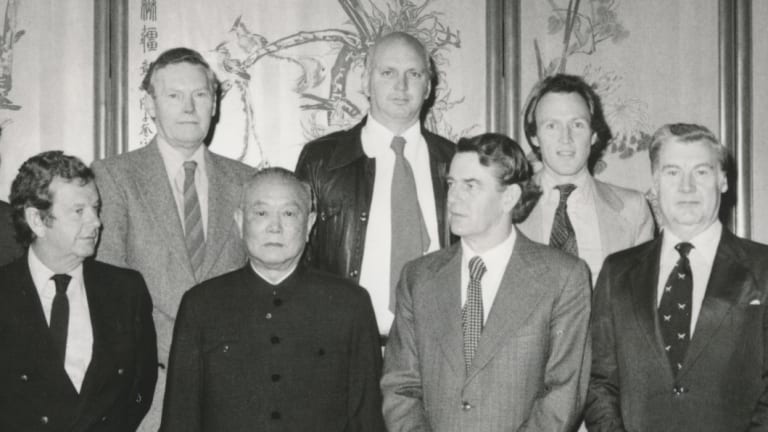 Such a partnership between a western media company and People's Daily would be unthinkable in China today, where strict media censorship and warnings against western media influence persist not only in state newspapers but online.

Beverley recalls how different the mood was in 1979: "They were coming out of their shell – it was making contact with the world."

The invitation to talk came out of the blue. Former foreign editor Cameron Forbes says: "I haven't got a clue how The Age popped onto the radar screen in Beijing".

But in 1979, word was sent to Spencer Street, Melbourne, that a delegation of editors should come to China. Forbes, Beverley and Age editor Michael Davie travelled for weeks, dining on crab in Suzhou and banqueting in Shanghai, as a foreign ministry minder took notes. When the delegation arrived in Beijing, they were introduced to Chinese vice-premier Li Xiannian.

During a Beijing meeting, it was proposed The Age partner with People's Daily to create the first English paper in communist China.

Forbes says: "When I got back I wrote a memo – we should do what we can to help, but we shouldn't have official links."

The Age editors were motivated to help the Chinese because "they were just emerging from the trauma of the Gang of Four period. The feeling was we should do what we could do to help professionally in nurturing journalism."

But Forbes also sensed the Communist Party would continue to rule with a firm hand, and was uneasy about a direct connection between The Age and a new Chinese masthead.

When I got back I wrote a memo – we should do what we can to help, but we shouldn't have official links.

"I quoted the line in my memo, 'Let a hundred flowers bloom, let 100 schools of thoughts contend'."

It is a famous Maoism about a brief window of liberalism in 1956 that preceded a crackdown on dissenting intellectual thought. 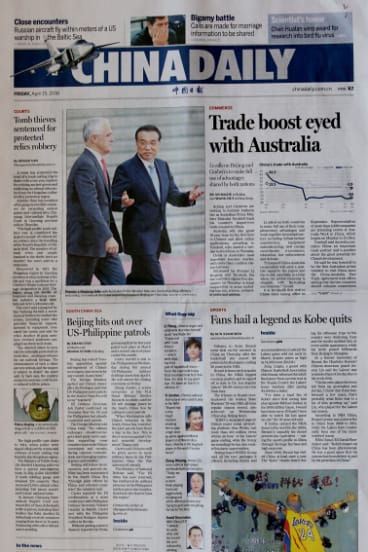 Then prime minister Malcolm Turnbull appeared on the front page of the China Daily with Premier Li Keqiang in 2016.

Stephen Fitzgerald, who had recently stepped down as Australia's first ambassador to China, helped the company negotiate how the partnership would work.

When novelists Nicholas Hasluck and Christopher Koch travelled through China in 1981, they visited the "dilapidated" China Daily offices and met Lawrence.

"I gather there is some kind of commercial link between China Daily and The Age," Hasluck wrote, after viewing the new computers.

The Age's then managing director Ranald Macdonald, a member of the Syme family, who approved the China project, says: “I was on the board. We had a 50 per cent interest and employed the staff."

Macdonald was the chairman of the International Press Association at the time, and says he supported the free flow of information to the developing world.

Lawrence drew up the first page for a China Daily mock-up in Melbourne, which won Chinese approval. On the day the paper launched in June 1981, the Australian laid out the front page.

He, his wife and one-year-old daughter were the first occupants of a flat for "foreign experts" in the People's Daily compound. "There was a lot of goodwill," he says.

The newspaper carried an eight-page supplement on Australia to mark Australia Day in 1982, with a signed message from prime minister Malcolm Fraser on China Daily’s front page.

Lawrence also recalled taking the People's Daily journalists to a pub in Sydney where they were bewildered to see "one-arm bandits" or poker machines. "They are tigers that eat money," explained the Chinese ambassador, who was translating.

But the partnership was short-lived. Macdonald recalls dining at midnight with Chinese premier Zhao Ziyang in Beijing, after receiving a call to discuss China Daily in 1983. 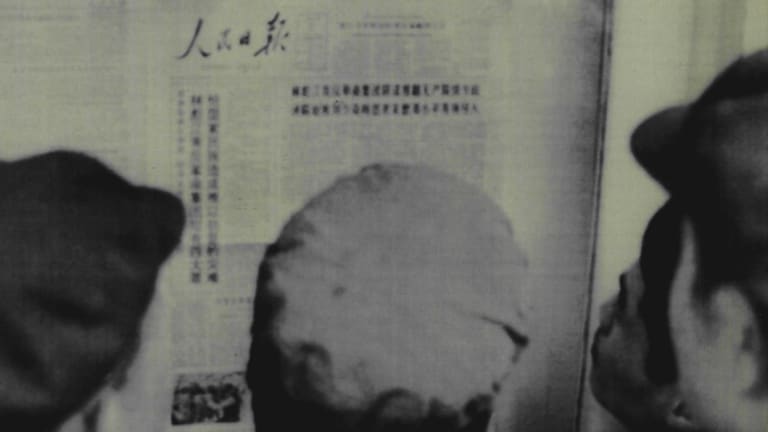 Beijing residents read the front page of the People’s Daily reporting on the indictment of the Gang of Four in 1980.Credit:AP/File

"They embraced the concept, theoretically, of the free flow of information, but there was a full stop," he says.

“We stayed as long as we could … we pulled out."

The current editor-in-chief of The Age, Alex Lavelle said: “We wouldn't see a commercial partnership like this one take place today, but it's interesting that 40 years ago there was clearly plenty of support for it, both from the government and editorial executives.”