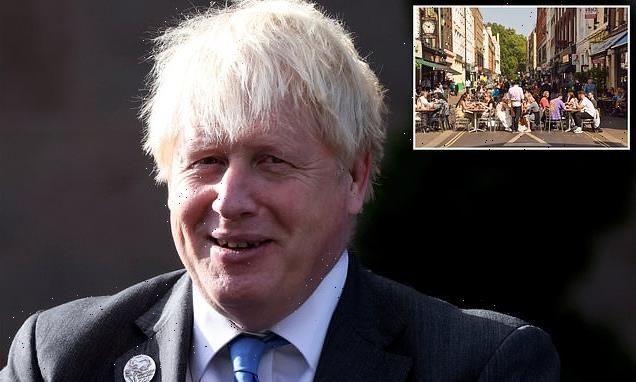 Tory MPs fear Boris Johnson will put the nation on a ‘slippery slope’ back to another lockdown if he triggers the Government’s coronavirus ‘Plan B’.

Spiking Covid-19 case numbers have prompted concerns that the Prime Minister could soon have to implement his fall back strategy which includes instructing people to work from home and to wear face masks.

But anti-lockdown Conservative MPs are adamant there should be no return to draconian curbs, claiming that the Government must not be ‘bullied’ by health chiefs into imposing new rules.

Meanwhile, hospitality bosses have also warned against reimposing restrictions, warning the PM that many pubs, bars and restaurants would ‘go to the wall’.

The hospitality industry is concerned that even light touch restrictions could hit bookings and put ‘Christmas at risk’.

The Government has insisted the triggering of ‘Plan B’ is not imminent, with the focus currently on rolling out vaccine booster shots.

But ministers struck an ominous tone this morning as they said the blueprint is ‘there for a reason’. 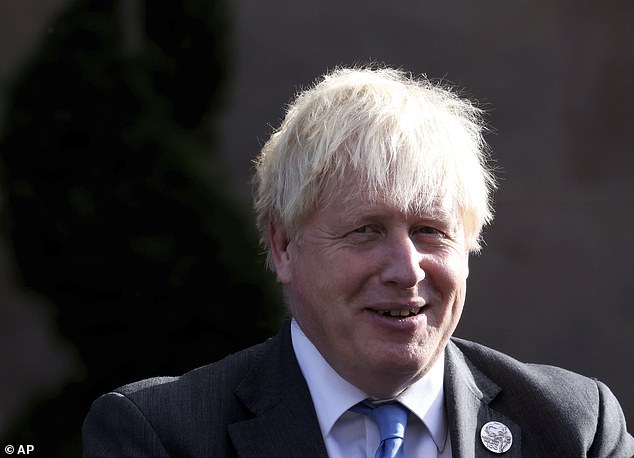 Hospitality bosses have warned Boris Johnson that reimposing coronavirus rules this winter would force many pubs, bars and restaurants to ‘go to the wall’ 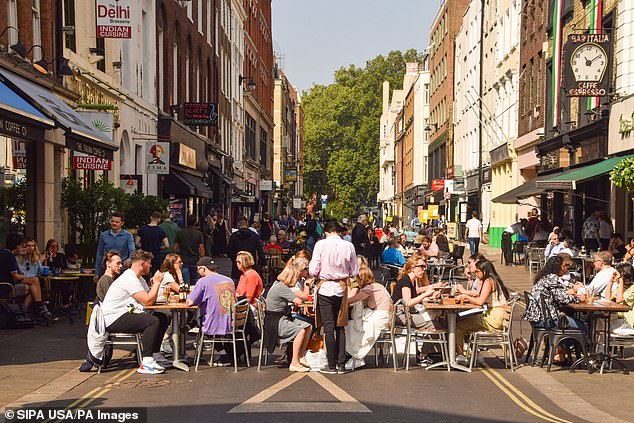 The hospitality industry is concerned that imposing the Government’s ‘Plan B’ would hammer bookings and put ‘Christmas at risk’. Soho in central London is pictured 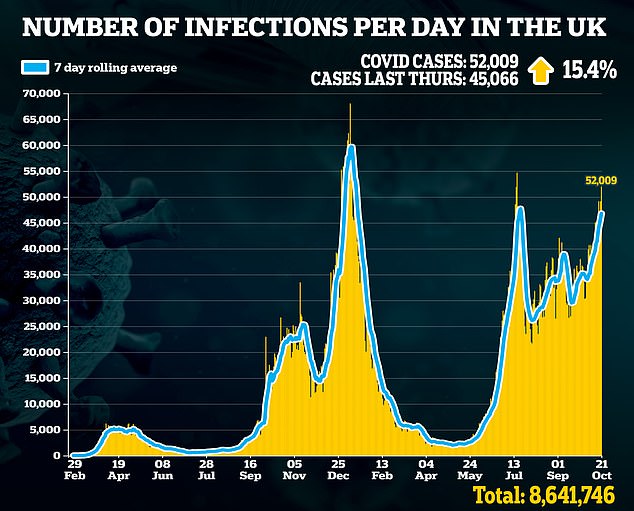 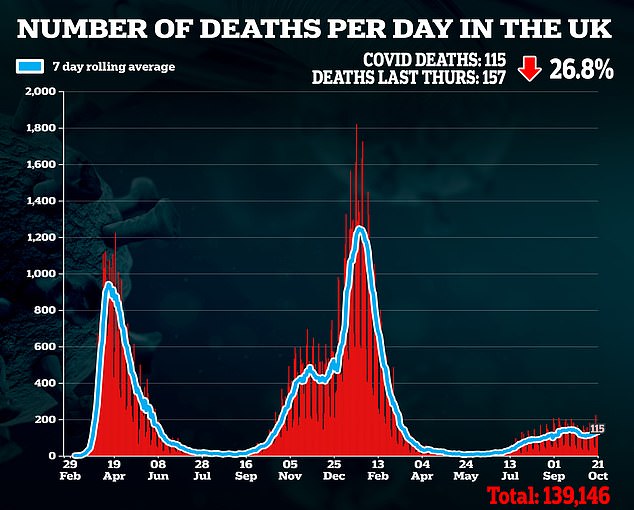 Boris Johnson last night piled pressure on his scientific advisers to cut the waiting time for booster jabs from six months to five.

If a decision is made immediately, nearly 9 million more Britons will become eligible for a third dose of the vaccine.

Concern has been growing that the rollout of the Covid booster scheme has been far too slow, putting the public at risk as cases rise. At present, over-50s and those with health problems are invited for their jab six months after their second dose.

Mr Johnson agreed that it was an ‘extremely important point’. The six-month deadline was imposed by the Government’s advisers on the Joint Committee on Vaccination and Immunisation (JCVI). The Prime Minister’s intervention suggests the JCVI may be asked to revisit the timeline.

Speaking during a visit to Northern Ireland, Mr Johnson urged over-50s to come forward and get their booster jabs as soon as they become eligible – saying it was important to ‘fortify’ defences against the virus.

‘The most important thing people can do now is get that booster jab. You get the call, get the jab. We have done about four million booster jabs already but as soon as you become eligible, as soon as you get that call, everybody over 50 should be getting that jab.

‘We are in a much better position going into the autumn/winter now than we were 12 months ago, incomparably better, because of the huge level of protection we have got from the vaccines.

‘Ninety per cent of the adult population has antibodies right now, but we most fortify ourselves further.

‘The numbers are high, we can see what’s happening, we can see the increase, now is the time to get those booster jabs.’

Health bosses have already called on the Government to introduce ‘Plan B’ measures as they warned the NHS is heading for a winter crisis.

Meanwhile, a further 115 people had died within 28 days of testing positive for Covid-19 as of Thursday, bringing the UK total to 139,146.

The period between Halloween and New Year’s Eve is vital for the hospitality industry as bookings normally soar before a lull in January and February.

But there are growing concerns in the sector that some coronavirus restrictions could be reimposed before the end of the year in a move which could damage consumer confidence.

Mr Johnson is said to have delayed a decision on whether fresh Covid curbs are needed until after half-term in the hope the school break will halt the surge in cases.

Phil Urban, chief executive of Mitchells & Butler, which owns pubs and restaurants including the All Bar One chain, told The Guardian: ‘People are very nervous and if you move to Plan B it puts Christmas at risk.

‘The industry is not out of the woods, and just as we get our momentum back we’d have the rug pulled out from under us.’

Kate Nicholls, the chief executive of UK Hospitality, echoed a similar sentiment as she warned many firms are ‘still fragile’.

‘We lost Christmas in its entirety last year so it’s desperately important for survivability, getting you through the bleak months of January and February when people don’t come out as much,’ she said.

‘A lot of businesses are still fragile. Any knock at this point in time could have an impact on viability. People will just go to the wall.’

Some Tory MPs are strongly opposed to the return of any restrictions.

One MP told MailOnline that triggering ‘Plan B’ could put the country on a ‘slippery slope’ towards another lockdown.

They said: ‘I am very concerned about the idea of moving to Plan B because you could see that slipping away into another lockdown.

‘Although the cases are high, the death rate is pretty low. It seems that if the booster rollout continues then it may keep things at bay.’

Meanwhile, Tory MP Marcus Fysh said the Government must not be ‘bullied’ into imposing new curbs.

He said: ‘The position on this has been to get bullied on different things and I don’t think we should be doing that at this point.’

Care Minister Gillian Keegan said this morning that the Government remains focused on the vaccine rollout as its main defence against the virus after she was asked why ‘Plan B’ still has not been triggered.

She told Sky News: ‘We laid out Plan A and Plan B and we have just started, as I say, five weeks ago Plan A.

‘The most important thing is to do all the tings I have just said: Get that vaccine rolled out, get those boosters rolled out.

‘And of course we have Plan B there. It is there for a reason. But right now we are really focusing.

‘We know that the vaccine is the best thing we do and really focusing on making sure that that is rolled out.’

Boris Johnson has delayed a decision on whether fresh Covid curbs are needed until after half-term in the hope the school break will halt the surge in cases.

Government sources say that ministers have been startled by the rapid spread of the virus among schoolchildren, where infection rates are up to ten times higher than among the wider population.

A source said ministers hoped that next week’s half-term holiday in England would break the increase in daily infections, which rose to more than 50,000 yesterday for the first time since July.

The Prime Minister yesterday said that he was sticking with the existing approach for now, despite a growing clamour from the medical profession to move to the Government’s ‘Plan B’.

Sajid Javid, the Health Secretary, used a Downing Street press conference earlier this week to warn that the public must play its part to prevent Covid-19 restrictions becoming necessary.

Mr Javid said people must get their Covid-19 vaccines and any booster shots, as well as doing things like wearing masks in crowded places.

Asked if people face a tightening of restrictions if they do not get boosters or take care indoors, Mr Javid said: ‘Am I saying that if we don’t do our bit, get vaccinated, all those behavioural changes that we can make, that we are more likely to face restrictions as we head into winter…? Then I am saying that.

‘I think we’ve been really clear that we’ve all got a role to play.

‘If not enough people get their booster jabs, if not enough of those people that were eligible for the original offer, the five million I’ve talked about that remain unvaccinated, if they don’t come forward, if people don’t wear masks when they really should in a really crowded place with lots of people that they don’t normally hang out with, if they’re not washing their hands and stuff, it’s going to hit us all.

‘And it would of course make it more likely we’re going to have more restrictions. Now we want to avoid those.

Mr Javid warned that Covid-19 cases could reach 100,000 a day as the country enters a challenging winter period.

He said the UK was seeing ‘greater pressure’ on the NHS but the Government will ‘do what it takes to make sure that this pressure doesn’t become unsustainable, and that we don’t allow the NHS to become overwhelmed.’ 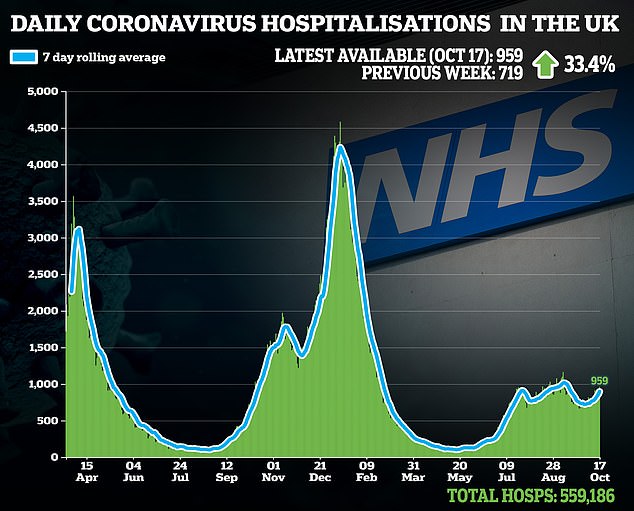 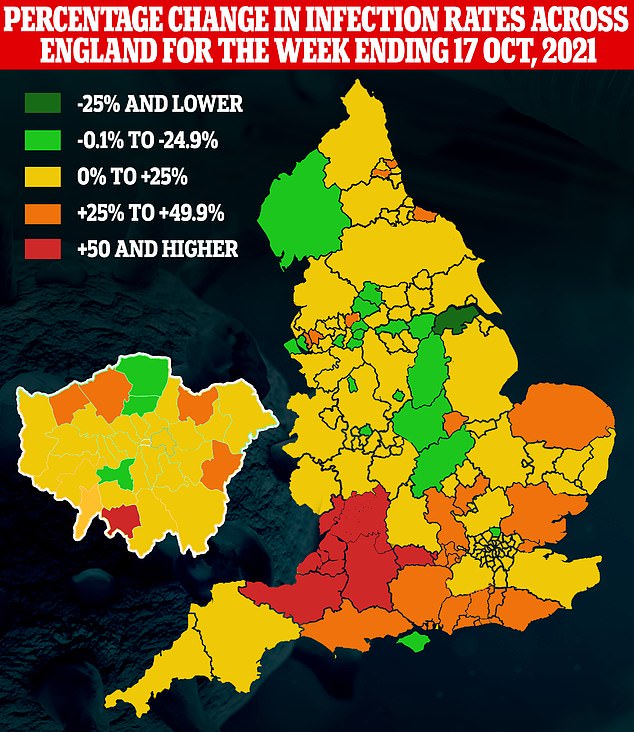 Deaths ‘remain mercifully low’ at the moment, he said, but added: ‘We’ve always known that the winter months would pose the greatest threat to our road to recovery.’

The Government has launched a media blitz to encourage more people to take up the offer of a Covid-19 booster jab.

The nationwide advertising campaign will run on outdoor billboards, broadcast and community radio and TV to support the national vaccine drive.