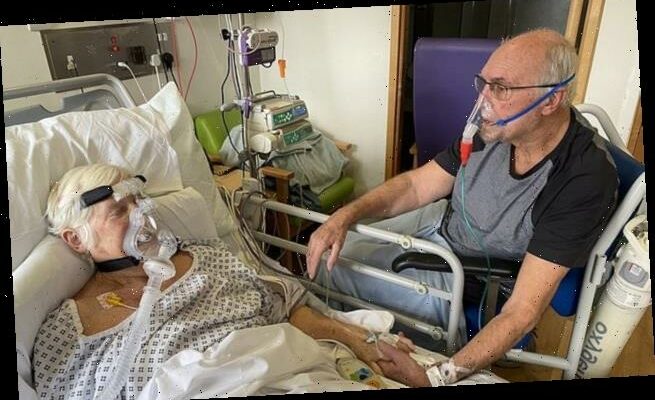 The last goodbye? Hospital lets elderly couple spend final moments together as they both battle Covid-19

Holding hands across a bed littered with tubes, this elderly couple were able to say their last goodbyes in hospital – where they were both being treated for coronavirus.

Gerry Jarrett, 79, and his wife Barbara, 76, have been in separate wards at Frimley Park Hospital, Surrey, since they were admitted with the virus two weeks ago.

When Mrs Jarrett’s condition deteriorated on Tuesday, the hospital allowed the couple from Bracknell, Berkshire, to spend some precious time together as she ‘looked to be at the end’. 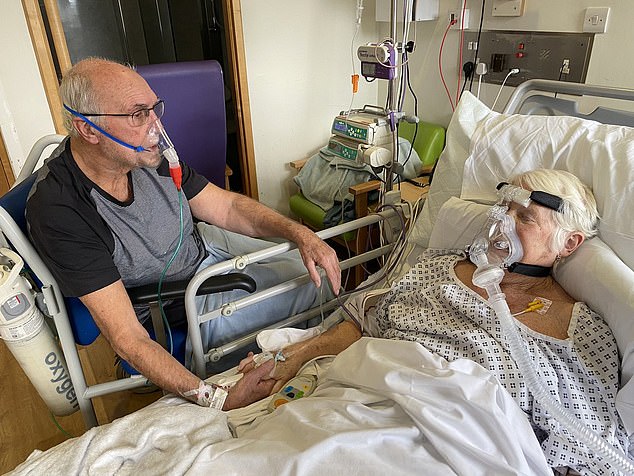 Gerry Jarrett, 79, and his wife Barbara, 76, have been in separate wards at Frimley Park Hospital, Surrey, since they were admitted with the virus two weeks ago

Describing the reunion, their daughter Chloe Keljarrett told the BBC: ‘Dad was wheeled in, crying, touched her hand and her eyes flew open. She was awake and bright and could talk.’

Mrs Keljarrett said her parents had been together for 50 years and thanked the hospital for their ‘incredible’ efforts to allow her father to share more moments with his wife.

She said: ‘In the midst of a pandemic peak, staff… made sure my dad saw my mum for what is likely the last time.’

Mrs Keljarrett, a teacher at The Brakenhale School, said her parents managed to see each other again on Wednesday ‘for a precious extra hour or two’.

She added that her father was showing signs of improvement but had ‘a very long journey to complete’.

She said: ‘He has a number of other health issues that will make recovery that bit trickier, but I have to remain positive that he will overcome this horrendous virus’.

Mrs Keljarrett praised staff at the hospital who were ‘pulling unexpected double shifts’ and managing to show compassion ‘when they are stretched to their emotional and physical limits’.

Responding to the post on social media, Frimley Park Hospital said: ‘Our hearts go out to you and your family.

‘We are so glad that our staff managed to make this time just a little bit easier for you all. This truly is some of the care we give that matters the most.’

At the start of the pandemic many family members were unable to say their last goodbyes to loved ones after stringent restrictions were introduced in the UK on March 23.

New guidelines were brought in on April 15 to allow close relatives to visit dying members of their family in hospitals and care homes.

The rules state that unnecessary visits should still be limited but advise that ‘visits at the end of life… should continue’.

Discussing end of life visits Health Secretary Matt Hancock said that ‘wanting to be with someone at the end of their life is one of the deepest human instincts’.

He added: ‘It’s a moment that will be with you forever. Done right it can help those left behind cope and it brings comfort to those who are dying.’