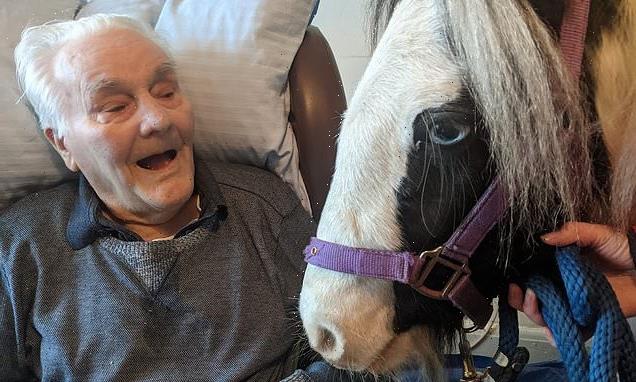 ‘His face lit up’: Heartwarming moment family bring HORSE indoors to visit house-bound grandfather with dementia on his 96th birthday

This is the heartwarming moment a housebound grandfather man received a surprise visit from his granddaughter’s horse to help him celebrate his 96th birthday.

Footage shows William Bailey, from Doncaster, greeting the unexpected visitor when his daughter, Faye, 45, turned up at his birthday bash with a horse in tow.

William, who turned 96 on October 30, grew up alongside Gypsy cobs and travelled around the country in his father’s wagon helping run the travelling Bailey’s Funfair. 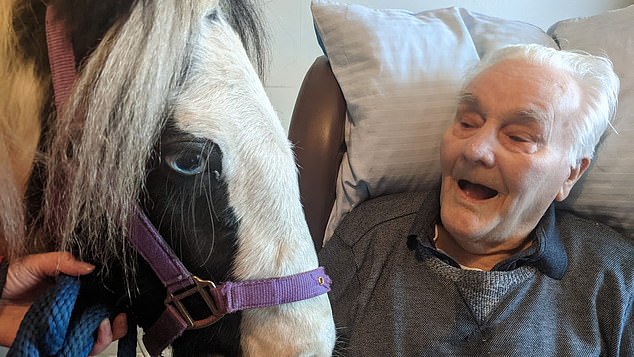 William Bailey, from Doncaster, received the surprise of his life when his daughter, Faye, 45, turned up at his 96th birthday party with a horse in tow 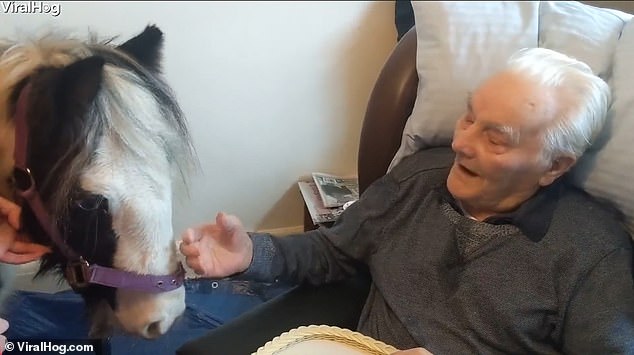 His daughter, Faye Bailey, 45, said she started crying as she watched her father’s reaction to meeting Chance, a Gypsy cob horse 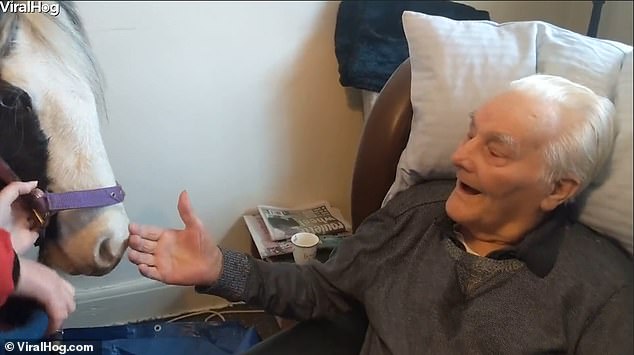 In the clip, Bill’s face lights up as he can hear the horse quietly neighing in the background, and he breaks out into a huge smile once he first sees the horse

Although he suffers with diabetes, prostate cancer and dementia, William often speaks glowingly about the horses he remembers from his younger years.

But due to his ill health and ever-increasing age, William is now house-bound and has carers who come in to help him with day-day living.

In the video clip, Bill’s face lights up as he can hear the horse quietly neighing the background. Once it enters the room, his beaming smile is clear for all to see.

His daughter, Faye Bailey, explained she wanted to do ‘something really special’ to make his birthday as memorable as possible.

She told MailOnline: ‘Earlier this year we were told he [Bill] had just a few weeks to live, but he keeps ploughing on as he does.

‘I thought as this could be his last birthday I wanted to do something really special.

‘He has dementia but my mum always says he talks about the horses he had as a boy, he used to ride gypsy cobs.

‘My daughter, Shania, 21, got Chance [a Gypsy cob horse] for her 21st birthday, so I wanted to surprise my dad and bring Chance to him.’ 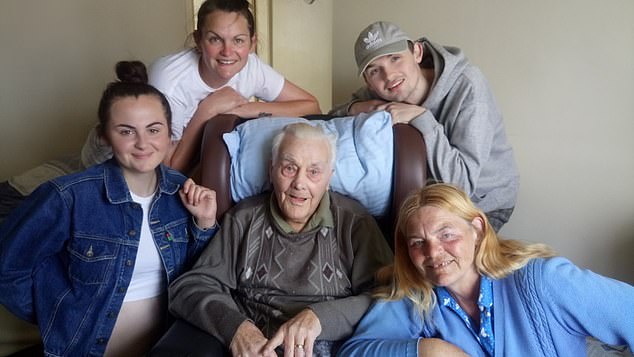 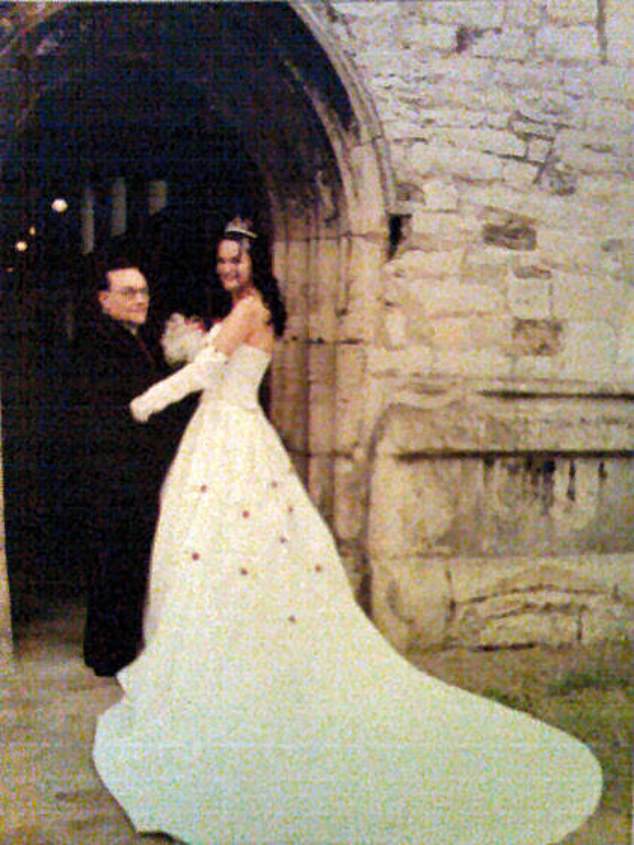 Due to his ill health and ever-increasing age, William is now house-bound and has carers who come in to help him with day-day living. Above: Bill gives away daughter Faye at her wedding

Although she admits getting Chance into his home was a ‘logistical challenge’, she was determined to make this birthday celebration a special one.

Because Bill can’t see out of his window, the family decided their best bet was to bring the well-behaved horse to him.

The family even set-up tarpaulins inside Bill’s living room in case there ‘were accidents’, but Chance kept it a clean visit. 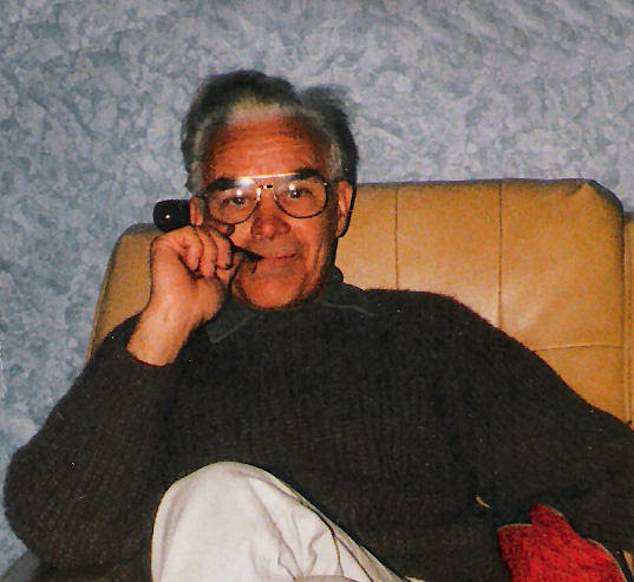 William (pictured) who turned 96 on October 30, grew up alongside Gypsy cobs and travelled around the country in his father’s wagon helping run the travelling Bailey’s Funfair 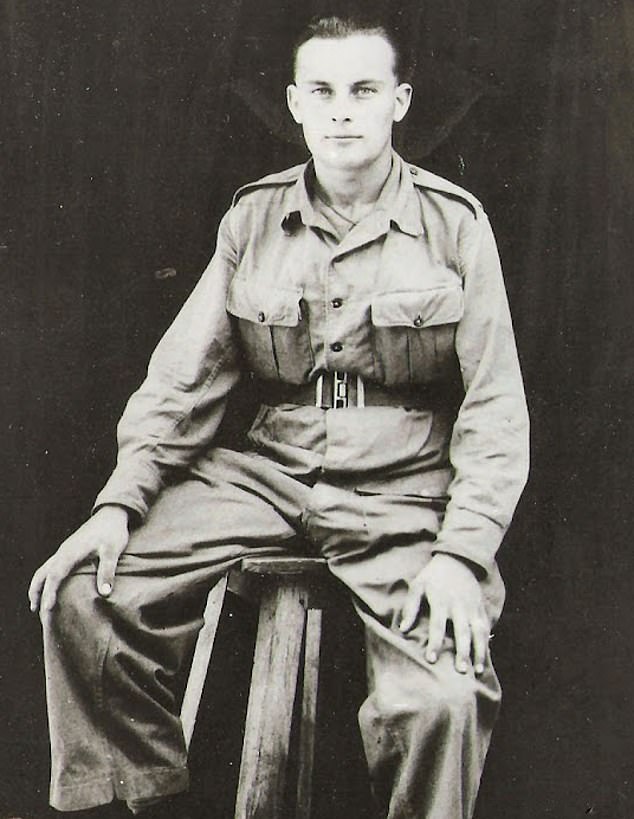 Although he suffers with dementia, Bill speaks glowingly of the Gypsy cob horses he grew up with as a boy. He is pictured above in India during WW2

‘So seeing his face and his reaction was absolutely priceless, his face literally lit up. It made me cry.

‘The fact I got to do this for him on his 96th birthday means so much to me, his reaction was absolutely amazing.

‘He went back to sleep after, and when he woke up he kept asking where his horse was!’