Ismailia, Egypt: The global economic troubles triggered by a giant container ship stuck in the Suez Canal worsened with the blockage of more ships carrying billions of dollars of goods. But hopes also grew that favourable tidal conditions could help free the Ever Given as a US Navy team was expected to arrive this weekend to assist in the operation.

Meanwhile, Egyptian authorities publicly acknowledged on Sunday (AEDT) for the first time that an initial investigation that found that the ship beached because of strong winds in a dust storm might not have been entirely accurate. 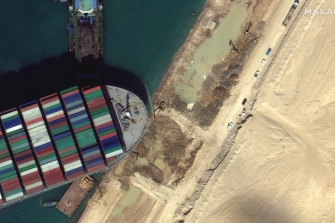 A satellite image shows the cargo ship MV Ever Given stuck in the Suez Canal.Credit:Maxar Technologies via AP

At a news conference, Lt Gen Osama Rabie, head of Egypt’s Suez Canal Authority, said that such “a significant incident” typically has many causes.

“The weather was one reason, but maybe there was a technical error, or a human error,” he said, adding that the probe into the grounding was continuing.

The potential for a full-blown economic calamity is palpable – the canal is a vital global portal, carrying 13 per cent of all global trade via ships ferrying $US9.5 billion ($12.4 billion) in goods each day.

A total of 321 vessels – carrying crude oil, cars, livestock and other commodities – were stuck in a massive maritime traffic jam at both ends of the 190-kilometre waterway, as well as in the middle, according to Leth Agencies, the canal’s service provider. 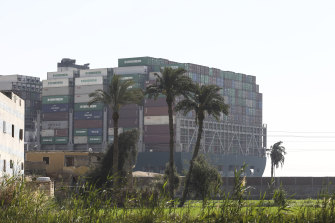 If workers are unable to free the wedged ship, more containers will be unloaded.Credit:AP

A drive along the canal, between the cities of Ismailia and Suez, found scores of massive ships carrying containers and other cargo, some seemingly the size of the Ever Given, stalled in the waterway.

More than 100 additional ships in the Red and Mediterranean seas were en route to the canal, said analysts, though a growing number of vessels were being diverted around the southern tip of Africa as concerns grew that getting the Ever Given afloat again could take weeks.

The ship is wedged sideways in a single-lane stretch of the canal, stuck in sand and mud roughly six kilometres north of the waterway’s southern entrance.

On Friday night (Egypt time), the ship’s Japanese owner, Shoei Kisen, offered a bit of hope by suggesting that tidal movements over the next few days looked favourable enough for another attempt to dislodge the Ever Given. Yukito Higaki, the company’s president, told reporters in western Japan that the ongoing dredging of the banks and sea floor to refloat the ship could be assisted by a high tide, which would raise the water in the canal and potentially help float the ship off the mud it’s mired in.

Fourteen tugs are trying to free the vessel, said Leth Agencies, noting unconfirmed reports by Egyptian media outlets that the ship’s propeller and rudder had been freed by the salvage equipment, which includes a specialised suction dredger capable of shifting 70,600 cubic feet of sand an hour.

If the rising tide doesn’t help free the vessel, Shoei Kisen said in a statement that it would consider removing its containers to reduce the vessel’s weight and thereby help it float again. 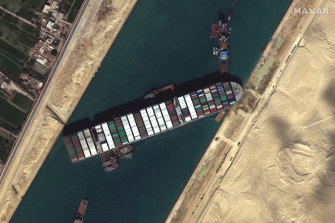 The ship, wedged in the Suez Canal.Credit:Maxar Technologies via AP

“The locomotives are now full force and the ship is starting to operate its machines, but it hasn’t been floating yet,” she said.

Rabei, of the Suez Canal Authority, said in a statement late that the “complex technical process” could require “multiple attempts” to free the Ever Given, which was heading to the Netherlands when it grounded.

The statement came hours after the authority welcomed assistance from the United States to reopen the canal.

“We have equipment and capacity that most countries don’t have and we’re seeing what we can do and what help we can be,” President Biden told reporters. The US Navy plans to send a team of dredging experts to the canal to assess the problem as early as this weekend, CNN reported, citing Pentagon sources.

Bernhard Schulte Shipmanagement, which is responsible for managing the ship’s crew and maintenance, said in a statement that there have been no reports of “pollution or cargo damage and initial investigations rule out any mechanical or engine failure as a cause of the grounding.” Two more large tugboats were scheduled to arrive on Sunday to assist in dislodging the ship, the company said.

The focus of the operations, it said, was to remove sand and mud from around the port side of the vessel’s bow, which is stuck in the canal’s eastern bank. High-capacity pumps, the company added, would be used to reduce water levels in the ship’s forward void space and bow thruster room, making the vessel lighter and more manoeuvrable.

There are two canal pilots aboard to guide the ship through the canal. The 25-member crew – all Indian nationals – were safe and accounted for and remained onboard, “working closely with all parties involved to refloat the vessel,” the company said.

More shipping companies appear to be losing confidence that the canal would be unblocked soon.

“Vessel-tracking data shows evidence that container lines are starting to take the long routes around southern Africa on the backhaul to Asia, rather than wait for the Suez Canal to reopen,” Lloyd’s List Intelligence, a maritime analysis firm, said in a tweet.

The list included the Ever Given’s sister ship, the Ever Greet, which was travelling from Malaysia to Europe and was diverted by either its Japanese owner or its Taiwan-based operating firm toward the Cape of Good Hope, according to satellite data.

The unprecedented bottleneck at or near the canal could strain global supply chains that are already stressed by the coronavirus pandemic.

On top of the need to shuttle raw materials to industrial manufacturers and pharmaceutical companies, shipping firms are grappling with extraordinary demand for consumer products, which has created a scarcity of empty containers.

The containers aboard many of the ships, with goods mostly from China, are destined for consumers in the United States and northern Europe.