Britons held to ransom: Holidaymakers are told to pay thousands of Euros or get out by hotels seeking their money back after Thomas Cook’s collapse

British holidaymakers last night told of being held ‘hostage’ in their hotels after staff threatened them with eviction unless they pay thousands of euros following the collapse of Thomas Cook. 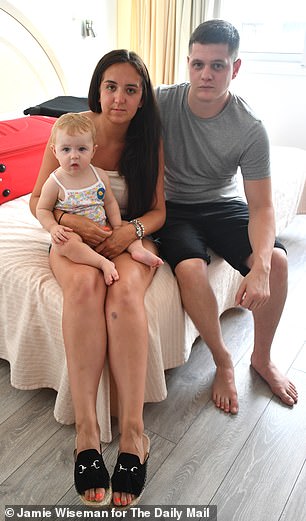 Stephen McGonnell and Stacey Robinson, whose nine-month-old daughter Olivia is sick with a chest infection, were among dozens of tourists handed handwritten bills at the Hotel Troya in Tenerife

Stephen McGonnell and Stacey Robinson, whose nine-month-old daughter Olivia is sick with a chest infection, were among dozens of tourists handed handwritten bills at the Hotel Troya in Tenerife.

Staff at the all-inclusive resort yesterday demanded the couple pay an additional 1,038 euros (£917) on top of the £1,500 they paid Thomas Cook for their ten-day stay.

Miss Robinson, 28, a recruitment consultant from Bolton, said: ‘The manager just wrote the figure on a piece of paper, slid it over to me, smirking, and said “pay or you’re out”.

‘I said we’ve paid for this trip already and we have a sick baby, this is ridiculous. So now we are frightened to leave the room empty in case they come up and remove all our stuff. We’ve been given contradictory advice from ATOL, who we have been ringing all day – sometimes they say pay it and other times they say don’t.

‘We don’t know what to do because what if we pay and can’t get it back? So now we’re prisoners in our hotel with a sick baby.’

Yesterday, Britons started to fly home on planes chartered by the Civil Aviation Authority. The £100m operation was beset by delays at many resort airports including Palma in Majorca. Some stranded guests complained of nine-hour delays.

Meanwhile another guest threatened with eviction at the Tenerife hotel was single mother Jodie McDade, 30, who paid £900 with her daughter Kara but was told she would have to pay an extra 451 euros (£398) or face being removed. ‘My sister spoke with CAA for me and they advised to pay the money as it was that or leave,’ the prison warden said.

Single mother Jodie McDade, 30, paid £900 with her daughter Kara but was told she would have to pay an extra 451 euros (£398) or face being removed

Hotel staff remained unapologetic, claiming they had not recovered money from Atol following the Monarch Airlines collapse in 2017.

Thomas Cook cabin crew member Elizabeth Telford, 56, from Newcastle, staying at the hotel with her husband Andrew, 59, suffered a ‘devastating double-whammy’, losing her job as the firm collapsed and being threatened with eviction from the hotel unless the couple paid an extra 661 euros (£584).

‘I have worked for Thomas Cook for ten years and I loved it,’ the grandmother-of-three said. ‘I got an email in the morning saying they were really sorry, but the company has gone under and here is your P45. It said I would find out later about any money they owed me and I still have no idea about my pension.

‘So I lost my job, which was completely devastating in itself, then we get a note under our door from the hotel saying contact reception immediately. We came downstairs and the receptionist just slid a bit of paper with the figure of 661 euros written on it and demanded we pay it or we would be kicked out of the hotel.’

The hotel’s reception manager, who identified himself only as John, said: ‘We are waiting for Atol to confirm to us they will cover everything. But when Monarch collapsed the hotel didn’t get anything from Atol, so this time we are being more careful.

‘Some guests have paid, and will be able to claim it back. The ones who don’t will have to leave.’

The situation was similar for Thomas Cook holidaymakers in Ibiza, where Richard and Sue Moore, from Birmingham, were forced to ‘do a runner’ from their hotel when they were asked to pay extra. The couple booked a holiday to the Mar Y Huerta hotel through the beleaguered travel operator and were scheduled to fly home last night. However when they came to check out of their hotel yesterday morning, the Moores, who paid £1,400 for their 11-night holiday, were told: ‘You will have to pay more because we won’t get our money from Thomas Cook.’

Mr Moore, 69, a retired mechanical clerk, added: ‘We just wanted to get out of there because the longer we were there, the more hostile it would have become. We’ve basically legged it.

‘I’ve never done anything like that in my life. We’ve done a runner from the hotel. We haven’t done anything wrong as we paid in advance.’ 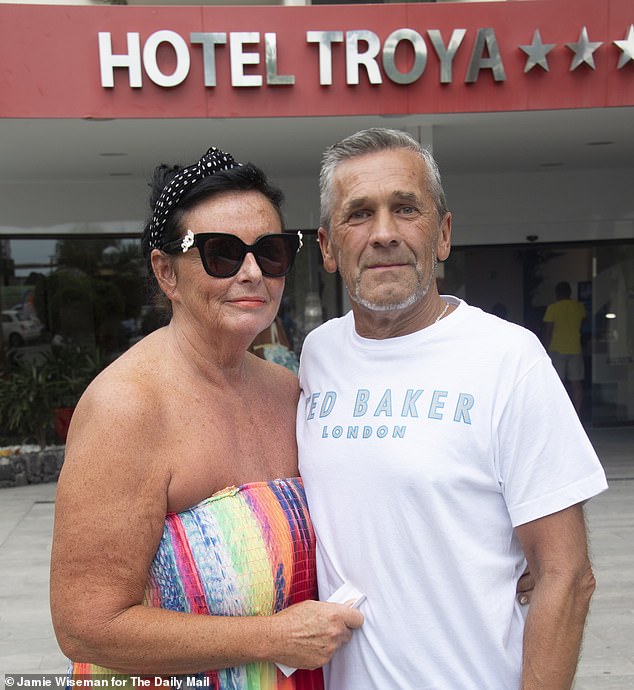 Thomas Cook cabin crew member Elizabeth Telford, 56, from Newcastle, staying at the hotel with her husband Andrew, 59, suffered a ‘devastating double-whammy’, losing her job as the firm collapsed and being threatened with eviction from the hotel

The couple’s terrifying plight emerged as the Government kickstarted Operation Matterhorn, a £100million effort to bring back 156,884 Thomas Cook customers stranded in 52 resorts.

Yesterday an estimated 14,000 travellers were flown back to the UK using a fleet of 62 aircraft borrowed from airlines from as far afield as Florida, Malaysia and Africa.

The fleet is assembled from airlines as diverse as Miami Air, Egypt Air and Malaysia Airlines, and includes everything from short-haul Airbus A320s to colossal A380 double-deckers and Boeing 747 jumbo jets.

A further 2,000 passengers who were due to fly back yesterday will return today, according to the CAA, which is masterminding the mass airlift – Britain’s biggest repatriation effort since the Second World War.

An army of hi-vis-jacketed ATOL and Foreign Office staff were deployed to meet holidaymakers, and a dedicated website set up to give details of flights.

Although most holidaymakers originally due to fly home yesterday were returned, some have been forced to wait until today and some flights were delayed. Others are being flown to different airports than those they set off from.