NEW DELHI (Reuters) – Dozens of Hindu monks and tens of thousands of followers, gathered under the banner of groups linked to Prime Minister Narendra Modi’s Hindu nationalist party, on Sunday urged the Indian government to help build a temple on the ruins of a 16th-century mosque. 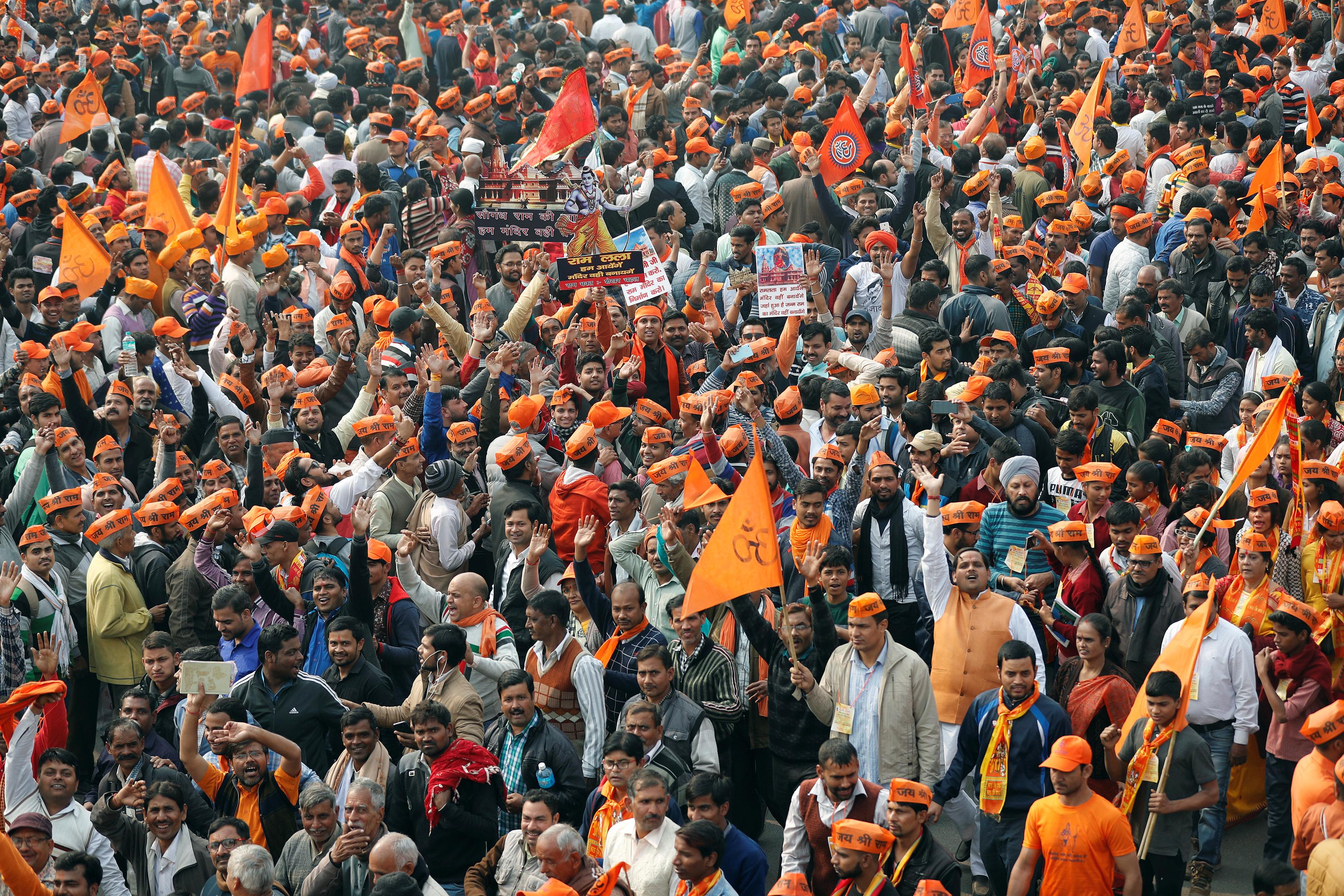 Causing a frenzy in a crowd of more than 200,000 people, Hindu seers made a series of fiery speeches laced with religious overtones to demand action paving the way for a temple in the northern town of Ayodhya.

In 1992 a Hindu mob tore down the centuries-old mosque in Ayodhya, triggering riots that killed about 2,000 people across India in one of the worst outbreaks of communal violence since Partition in 1947.

After the demolition of the mosque, both Hindu and Muslim groups petitioned the Supreme Court to help resolve the issue. The top court has sought more time to give its verdict.

The BJP, VHP and RSS have organized a series of religious meets to drum up support for their cause and also to put pressure on the government to issue the executive order.

Exhorting the crowd to take a vow to build a temple in Ayodhya, Hindu monk Avdheshanand Giri ji Maharaj, said: “The government and the Supreme Court must realize that it is a matter of religious sentiment for Hindus who have been waiting to see a grand Ram temple in Ayodhya.”

As millions of Hindus believe that the mosque stood at the birthplace of Lord Ram, one of their most revered deities, the dispute remains at the core of tensions between the Hindus majority and India’s minority Muslims who constitute 14 percent of the country’s 1.3 billion people.

Hindu groups insist that there was a temple at the site before the mosque was built in 1528 by a Muslim ruler.

“I’ve come here to attend the religious congregation as a Hindu woman; not as a politician, as I believe that the issue of Ram temple is linked with the faith of India’s 80 percent people,” said Meenakashi Lekhi, a lawmaker from the BJP.

Ahead of Sunday’s rally, police stepped up security in the city.

Anti-Muslim slogans reverberated on roads leading to the gathering near the old part of the city, where many Muslim families live. On their way to attend the religious meeting, some youths brandished swords.

In the run-up to a general election due by May 2019, the BJP and other Hindu groups have ratcheted up their demand for a new temple at the disputed site. 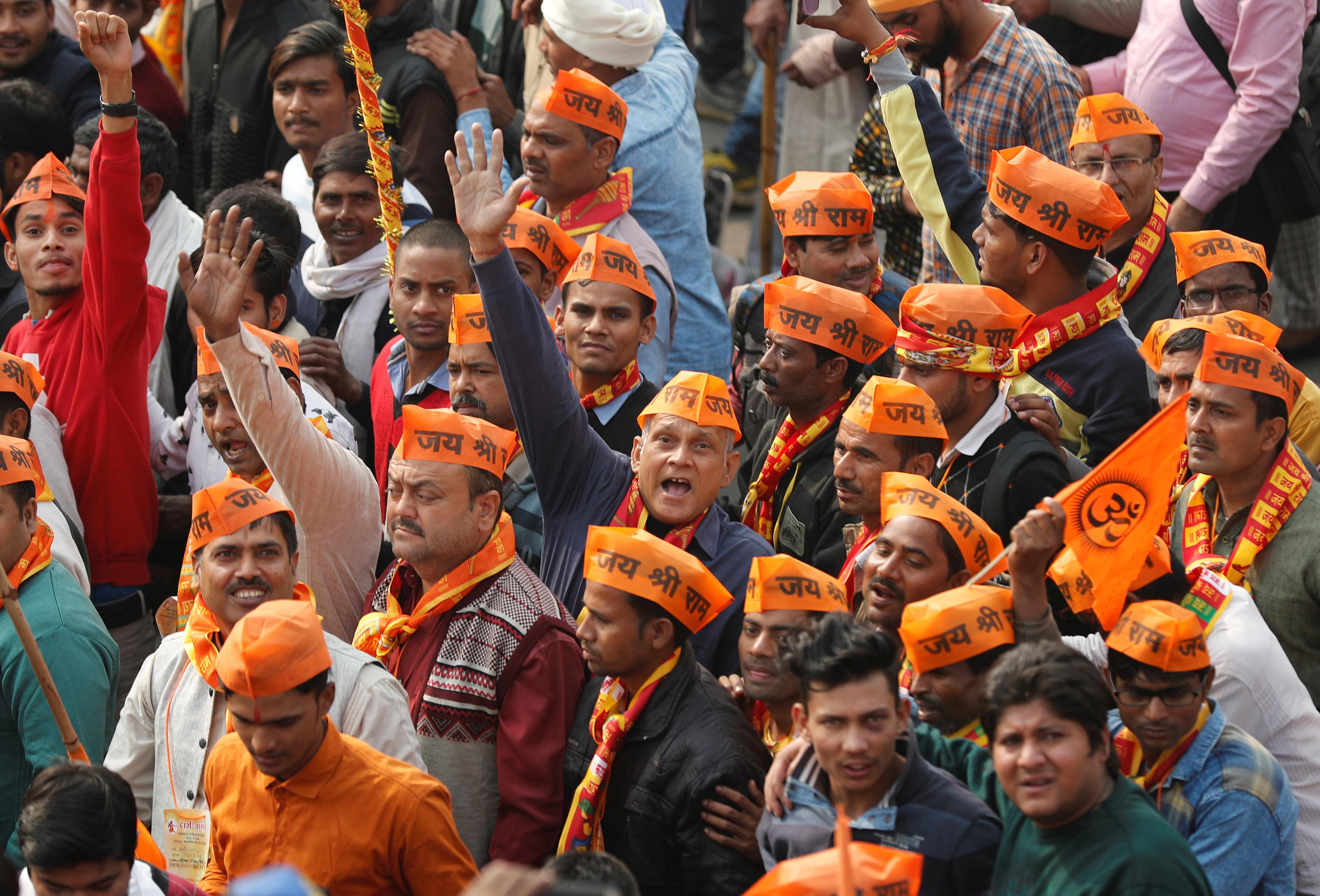 Most analysts expect Modi’s BJP to fare worse than it did in the 2014 general election, and critics often accuse the party of using communal issues to whip up support.

For the past three decades, the BJP and Hindu outfits associated with it have resurrected the Ayodhya controversy before elections, stoking tensions between Hindus and Muslims.

Uttar Pradesh, the state where Ayodha is located, has suffered repeated outbreaks of communal violence since Yogi Adityanath, a BJP hardliner seen as a potential successor to Modi, became chief minister last year.