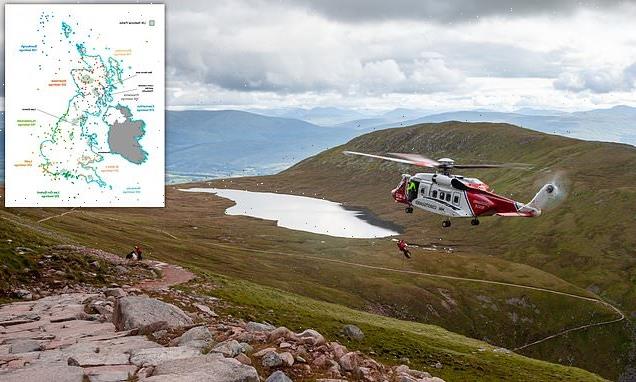 More than 2,200 helicopter search and rescue operations were carried out over the last year in UK with west Scotland recording highest number with 350

The UK saw 2,208 helicopter rescues over the last year with 50 per cent of the operations taking place on land, figures have shown.

Data shows emergency crews across the country were sent out to six helicopter rescues on average a day from April 2020 to March 2021, with search and rescue helicopters saving 1,226 people and assisting 232 others.

Prestwick in west Scotland recorded the highest number of helicopter rescues, with data showing 350 rescues were undertaken by emergency teams in the region.

Meanwhile Newquay on the north coast of Cornwall saw 255 helicopter rescues and Lee on Solent saw 252.

The latest figures mark a seven per cent decrease compared to the year before when there were 2,380 civilian search and rescue helicopter operations undertaken. 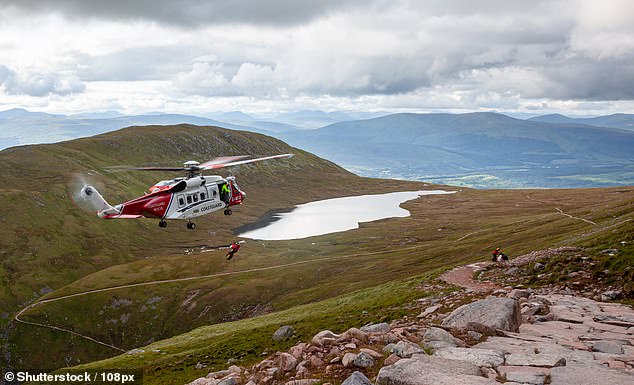 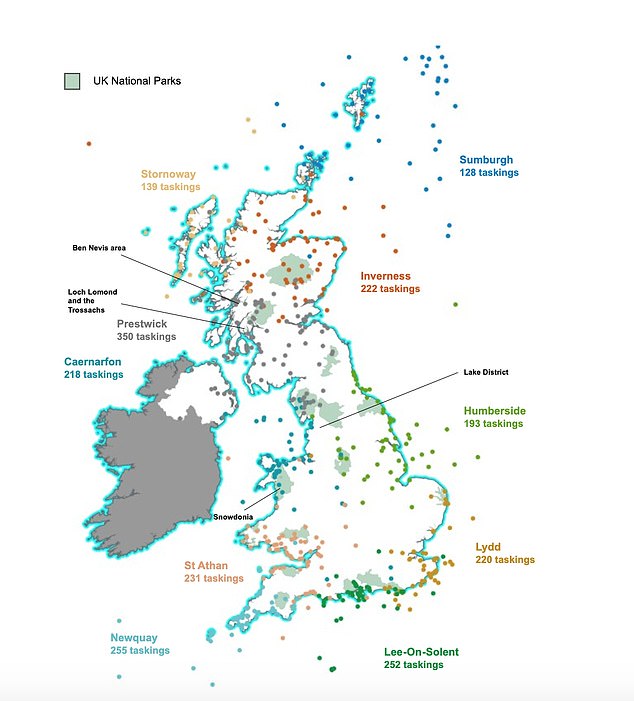 The were 139 rescue operations undertaken from  the Stornoway base in north west Scotland and 128 taskings from the Sumburgh base. Meanwhile Prestwick in west Scotland recorded the highest number of helicopter rescues, with data showing 350 rescues were undertaken by emergency teams in the region 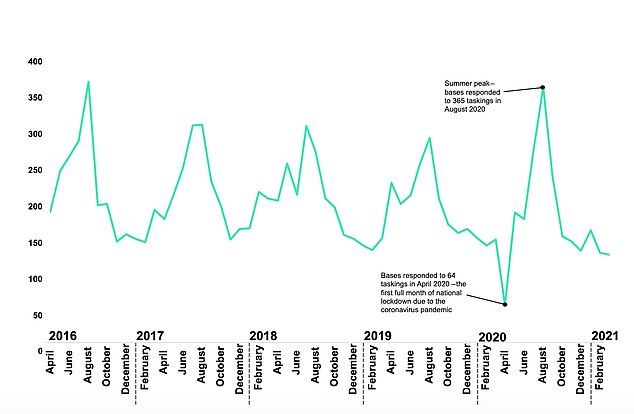 Figures show there were 1,054 land rescues, which accounted for 48 per cent of all rescues, and 883 coast rescues over the last year.

Meanwhile there were 271 sea rescues carried out by search and rescue helicopter teams – this accounted for 12 per cent of all rescues, compared to 16 per cent in the previous year.

Data shows the number of helicopter rescues were initially lower than in previous years, when the UK-wide lockdown was in place, with bases responding to just 64 taskings in April 2020.

However the figure increased to near previous levels between May and June, with  August 2020 recording 365 taskings – the second highest monthly volume of helicopter rescues on record.

This may be due to the number of people taking to the nation’s outdoor spaces in the summer of 2020 and the preference for domestic holidays in response to the coronavirus pandemic.

Figures show 47 per cent of helicopter search and rescue operations took place on land – the same proportion as in the previous year – while 50 per cent of the helicopter rescues took place along the coast – a four per cent increase from last year.

Figures from April 2019 to March 2020 showed Newquay and Prestwick had the most taskings, responding to 298 and 338 rescues respectively.

Meanwhile Stornoway and Humberside had the least taskings, responding to 140 and 180 rescues respectively.

The Sumburgh base had the highest proportion of rescue and recovery taskings (87%) with the majority taking place at sea. 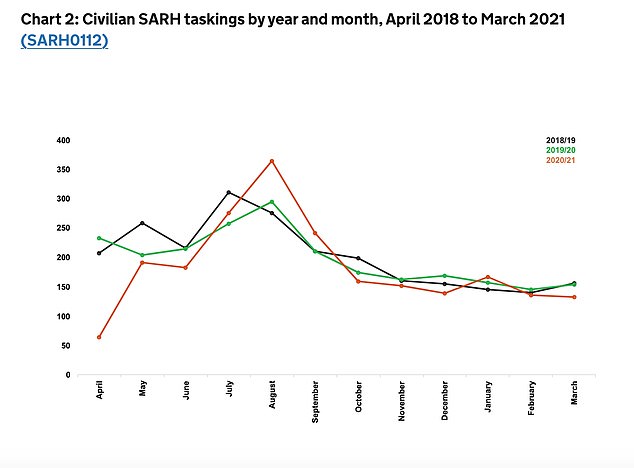 August 2020 recorded the second highest monthly volume of search and rescue operations on record (365 taskings) following the easing of lockdown easing. Meanwhile figures ffrom November 2020 to February 2021 were in line with previous years 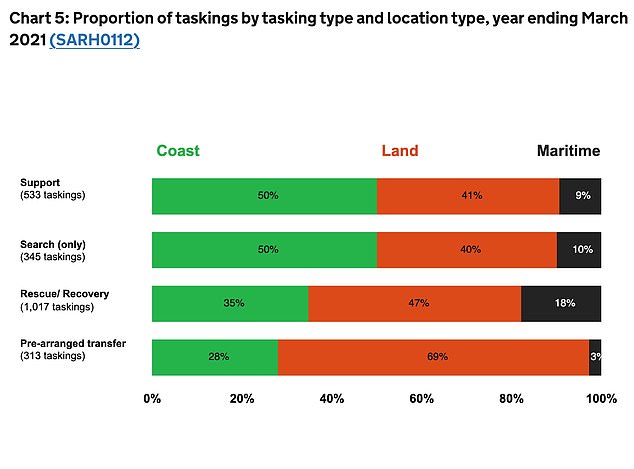 In the year ending March 2021, 69 per cent of pre-arranged operations took place on land – a decrease of 4 per centa compared to the previous year 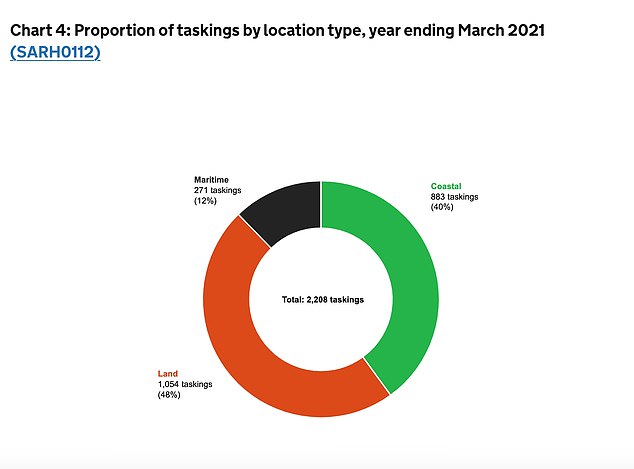 From April 2020 to March 2021, there were: 1,054 land based operations which accounted for 48 per cent of taskings, compared to 50 per cent in the previous year. There were 883 coast searhc and rescue operations and 271 maritime taskings

Earlier this year figures from The National Water Safety Forum revealed that Cornwall recorded the highest number of drowning deaths of any UK region over the past five years.

Data showed 80 people drowned in the county during this period, the equivalent of more than one every month, followed by 55 in Devon and 54 in Kent.

The figures also showed that men were far more likely to die in the water than women, making up 82 per cent of total fatalities, with young men aged 21 to 25 the most affected age group.

Almost half of all those who drowned had not intended to enter the water, according to the data.

The study came as the RNLI and Maritime and Coastguard Agency launched a winter coastal safety campaign, reminding people to steer clear of stormy seas and cliff edges.

Inverclyde in Scotland was the region which recorded the lowest number of accidental drowning fatalities at two in the last five years.

The statistics, released as part of the Water Incident Database (WAID) report, also found 46.8 per cent of those who died had not intended to enter the water.