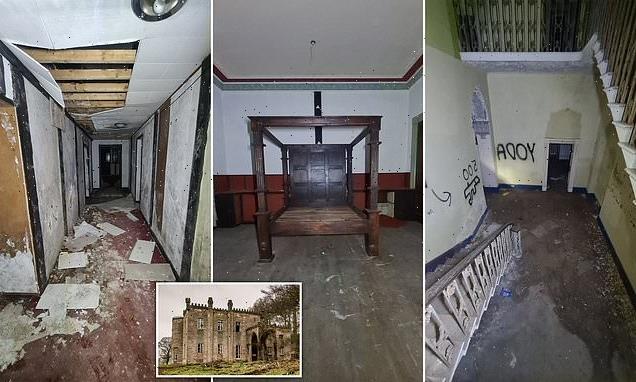 Eerie photos show the remains of a derelict castle which once held a treasure trove of rare collectors items before a criminal gang tied up the owner and raided the property.

Known as Cliffe Park Hall, the 19th century, Grade II listed mansion, which overlooks Rudyard Lake in north Staffordshire, has fallen into disrepair after a gang ransacked the property in 2013 and the owner died shortly afterwards.

The neo-Gothic-style building was built by John Haworth, the son of wealthy merchants, in 1811 at a cost of £25,000 and it passed to his cousin and lover Fanny Bostock when he died in 1831.

In the early 20th century, the estate was acquired by North Staffordshire Railway and was used as a golf course clubhouse. It was later leased to the Youth Hostels Association and turned into Rudyard Lake Hostel.

During its time as a youth hostel, author George Orwell stayed at Cliffe Park Hall. He visited Rudyard in 1936 while conducting research for the ‘Road to Wigan Pier’, which would document the bleak living conditions among the working class in the industrial north of England before WWII.

The Grade II listed building eventually passed into the private ownership of Brian Dalley, who, at age 79, was taped to a medieval chair, hooded and repeatedly beaten around his head as brutal criminals ransacked his home of 50 years on one September night in 2013.

During the seven-hour ordeal, the thieves stole hundreds of thousands of pounds worth of antiques, including a gold ceremonial sword studded with opals which once belonged to former Iraqi president Saddam Hussein. 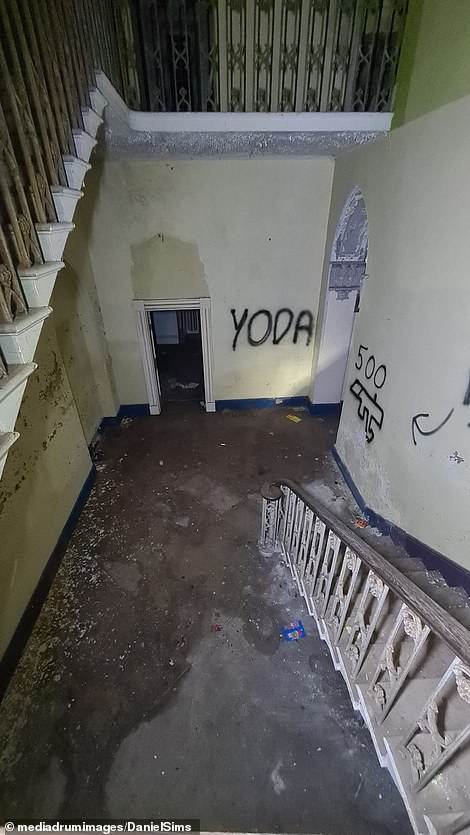 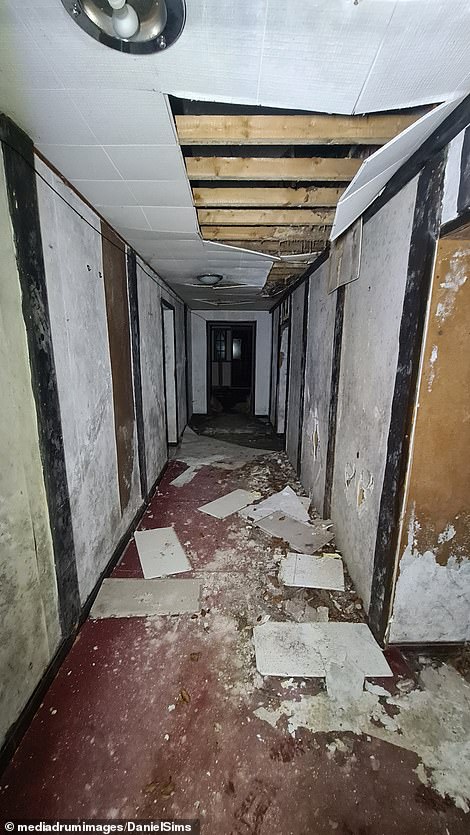 Photos show the derelict remains of Cliffe Park Hall, a 19th century, Grade II listed mansion in north Staffordshire which once held a treasure trove of rare collectors items before a criminal gang tied up the owner and raided the property 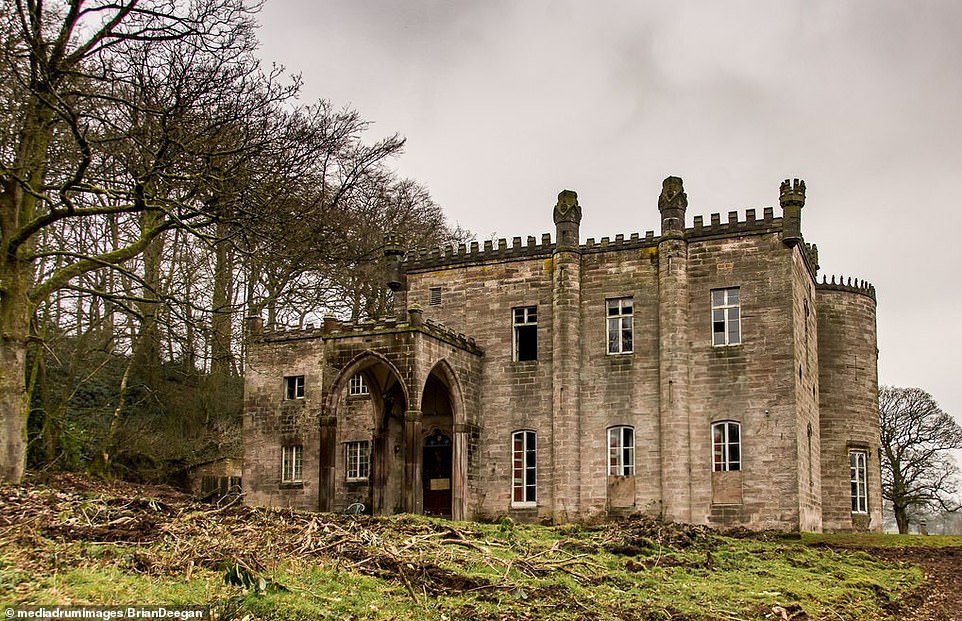 The abandoned fairytale castle, with its impressive stone turrets, gargoyles and arches, was built in 1811 by John Haworth at an estimated cost of £25,000 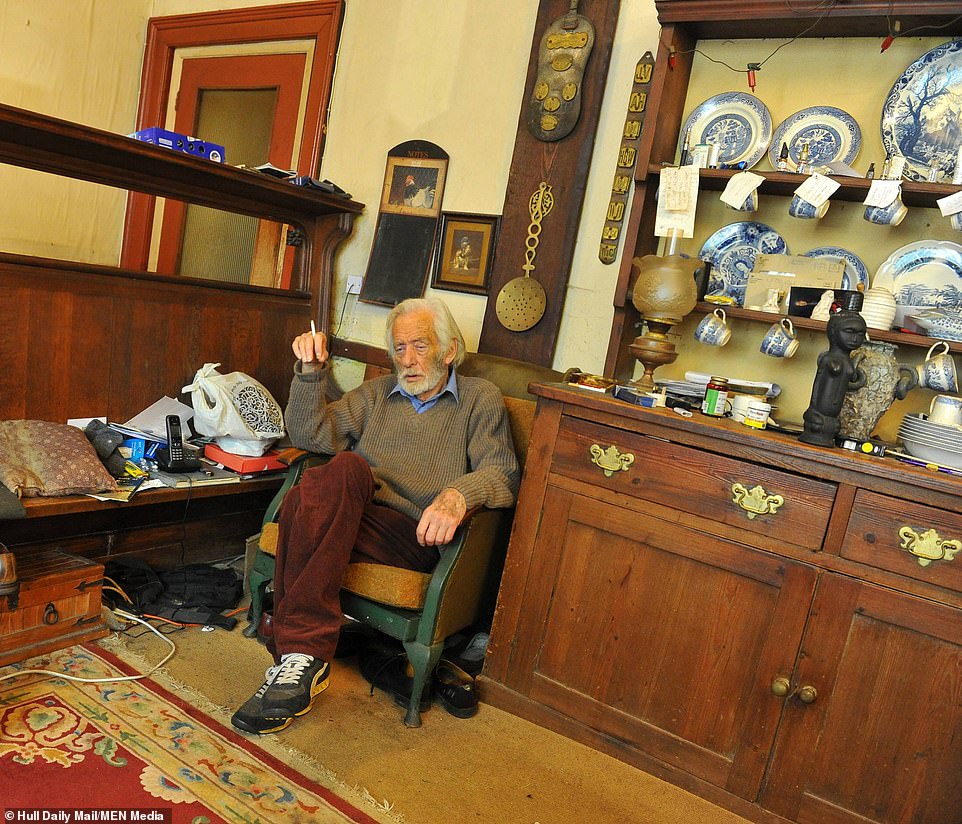 The Grade II listed building eventually passed into the private ownership of Brian Dalley (pictured), who, at age 79, was taped to a medieval chair, hooded and repeatedly beaten around his head as brutal criminals ransacked his home of 50 years on one September night in 2013 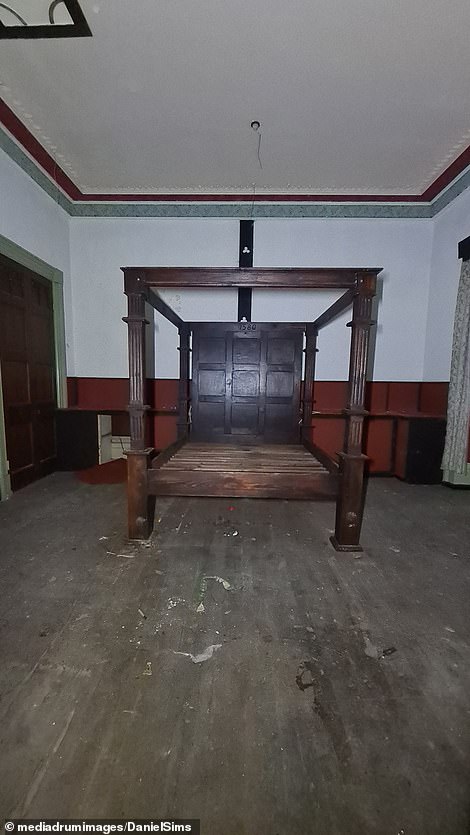 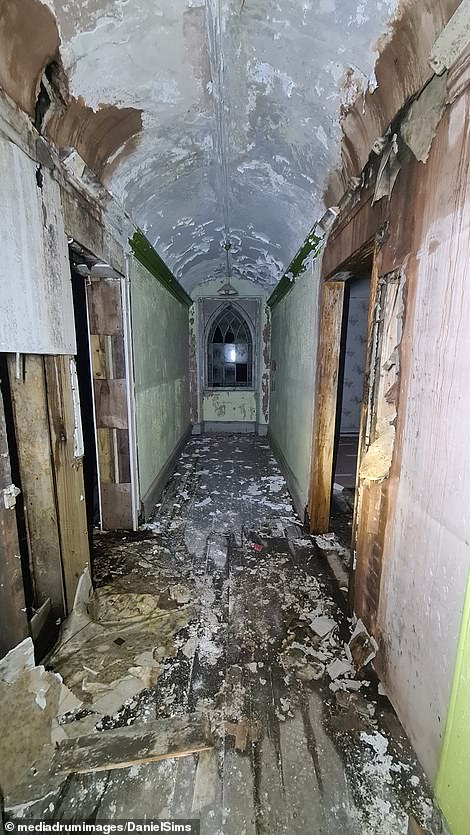 One image by urban explorer Daniel Sims shows a four-poster bed in the middle of a dilapidated room, while others show crumbling walls and falling-down ceilings

Two members of the gang – thought to have been an Eastern European organised crime network – grabbed the pensioner from behind as he returned to his secluded rural property at 8pm on September 27, 2013.

They punched their frail victim – who was recovering from a triple heart bypass – in the face before forcing him inside the house and tying him to a chair. They also attacked his German Shepherd Toby with a baseball bat.

A 17th century suit of armour, a Cromwellian spear and a centuries-old 14-foot elephant gun were among the historical artefacts stolen in the daring raid.

A chain mail vest and paintings of Oliver Cromwell and William Shakespeare were also reported missing, as well as several swords – including a gold and ruby plated broadsword.

The gang then sped away from the scene in a stolen Mercedes Sprinter van.

The elderly victim managed to free himself at 4.40am the following morning to raise the alarm and police rushed to the scene.

Remarkably, he was not hurt in the attack but was badly shaken by the terrifying ordeal. 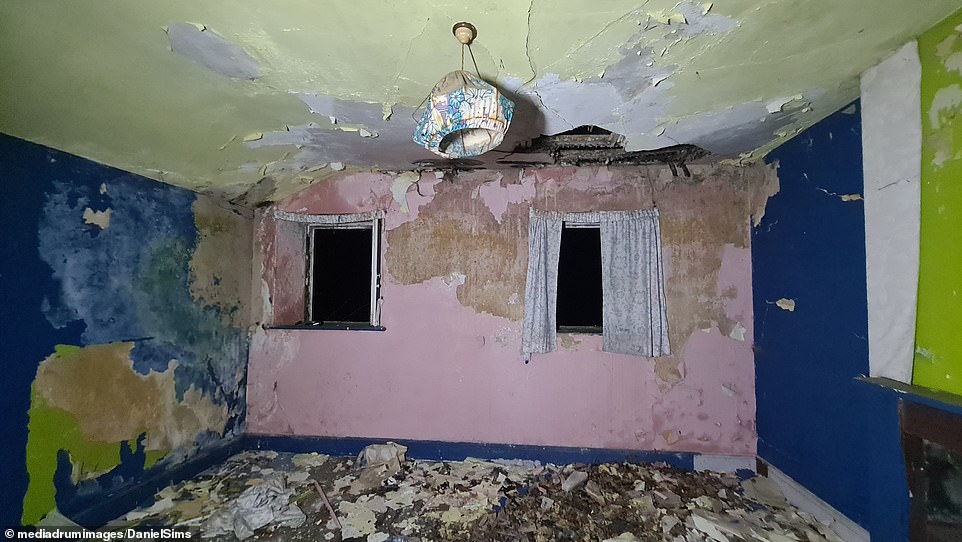 The house has fallen into a state of disrepair since the death of its former owner Brian Dalley, who passed away shortly after his terrifying experience with a gang of robbers 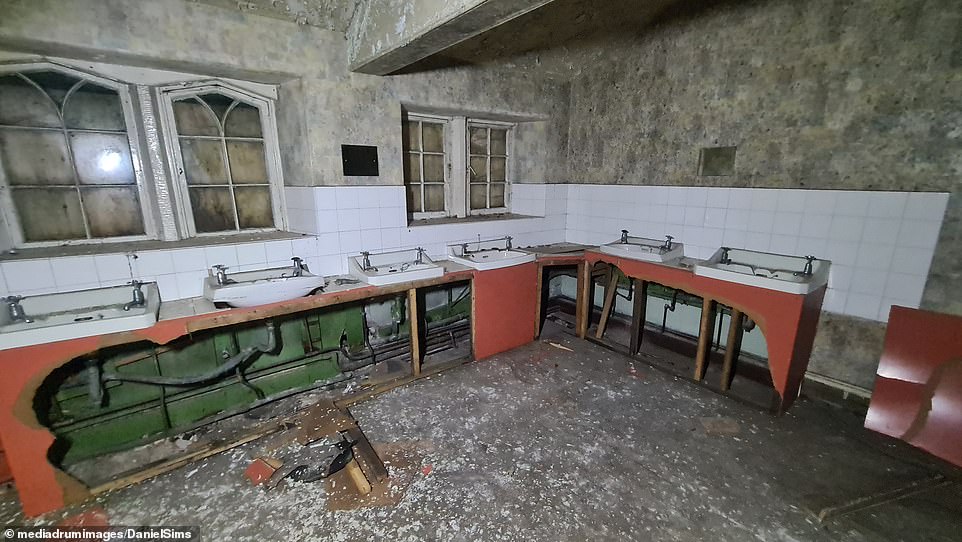 Remnants of a workers space can be seen in one image taken by Youtuber Daniel Sims, who explored the property in August 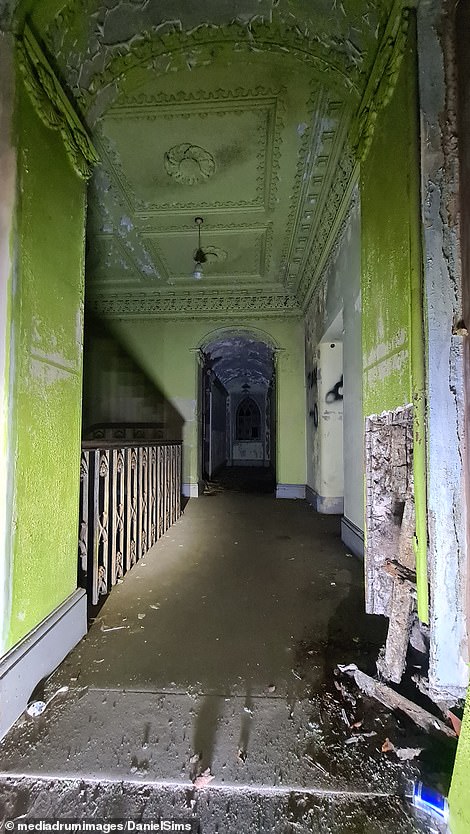 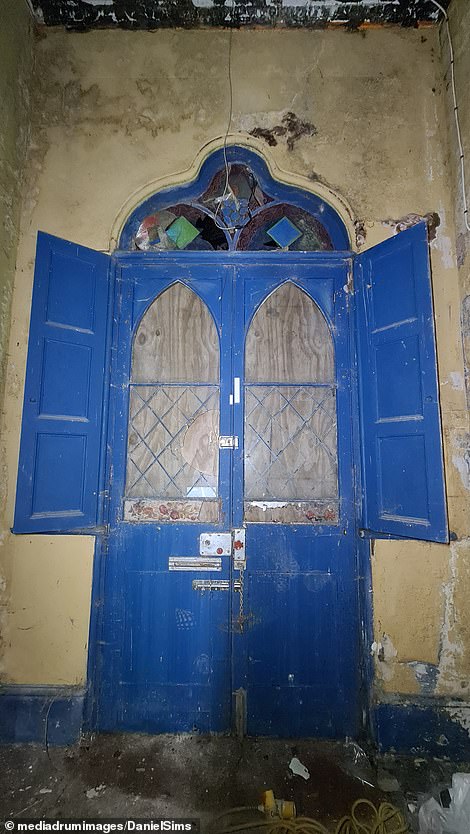 Some of the photos reveal the former opulence of the now dilapidated mansion. One hallway is bright lime green while a door is painted blue and has stained glass above it

The following year, half the stolen property was discovered after police planted a tracking device in a charity bag which led them to a lock-up in Hull. In August 2014, Humberside Police said one Lithuanian man had been jailed for seven years and three months for possessing firearms and handling the stolen goods which were found in the Hull lock-up.

MailOnline has contacted Humberside Police, asking them to confirm how many members of the gang were ultimately brought to justice but they have not yet responded.

Speaking at the time, the now deceased former owner Mr Dalley, a ex-actor and salesman, said he had been left feeling ‘anxious’ in his own home but was reluctant to sell it because there were ‘too many memories’.

In August Youtuber Daniel Simms, 33, better known as Bearded Reality, bravely explored the abandoned property, which is rumoured to be haunted, taking pictures of the crumbling rooms. 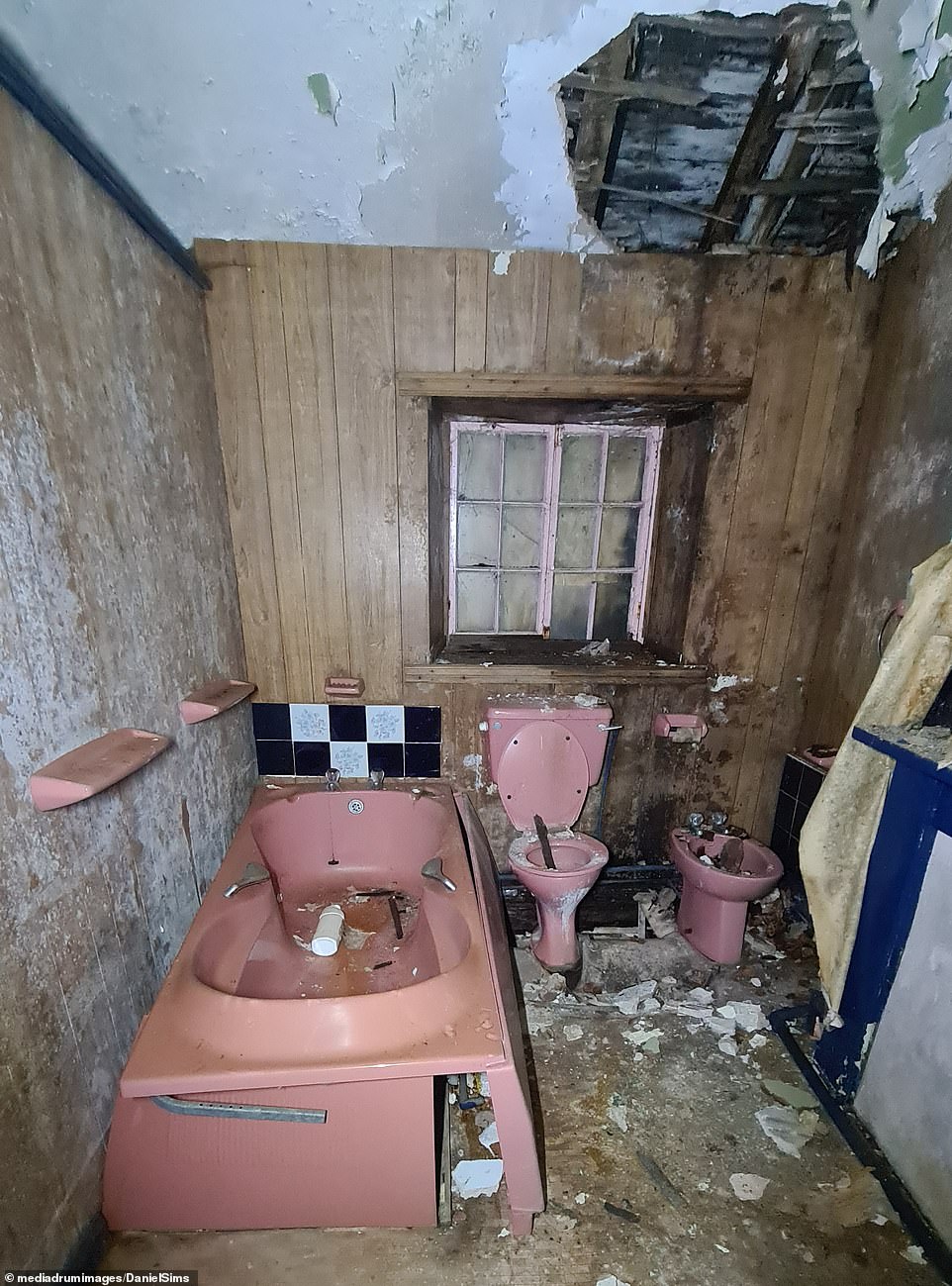 An eerie shot shows the remnants of a pink bathroom suite, now terribly damaged with broken plasterboard scattered across the floor 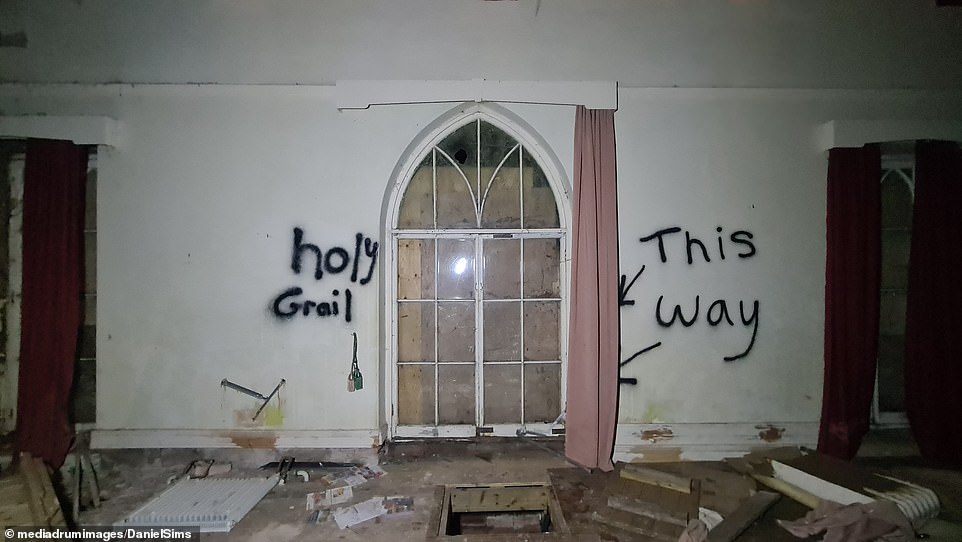 One of the photographs taken by Bearded Reality shows graffiti on the walls pointing to a glass door that states ‘holy grail, this way’ 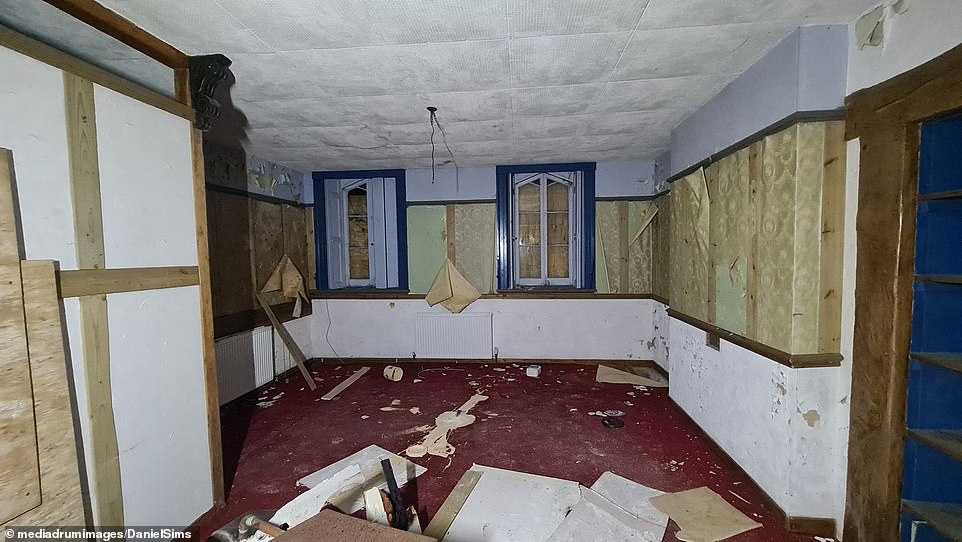 The property was sold for £480,000 in 2016 but it is not being occupied and has fallen into a state of disrepair

One image shows a four-poster bed in the middle of a dilapidated room, while another shows graffiti on the walls pointing to a glass door that states ‘holy grail, this way’.

Mr Sims has been an urban explorer since 2019 and documents his explorations on his YouTube channel. The history of this building definitely made it one of his most interesting explorations yet.

Sadly, it has fallen into disrepair but features include a cantilevered stone staircase rising from the Grand Hall with a glazed oculus above.

Covering a little under 10,000 square feet, there are a wealth of neo-Gothic and Georgian features inside, as well as 1.5 acres of land and a mooring on the lake.

Mr Sims claimed he had a supernatural encounter when he explored the abandoned house in August. 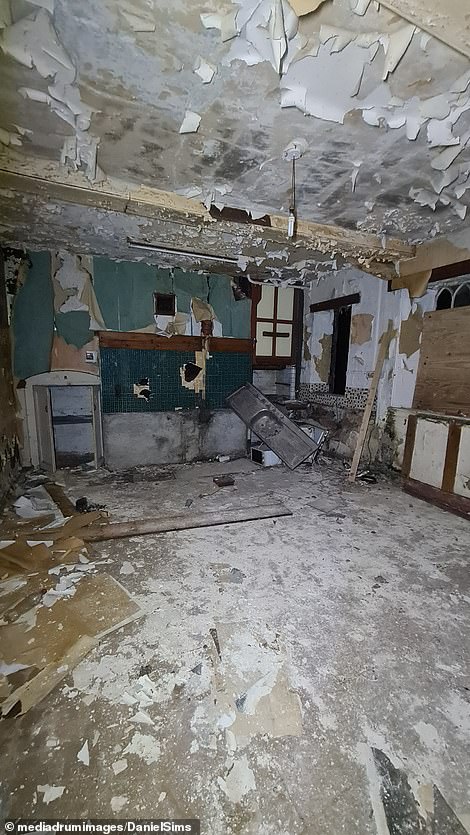 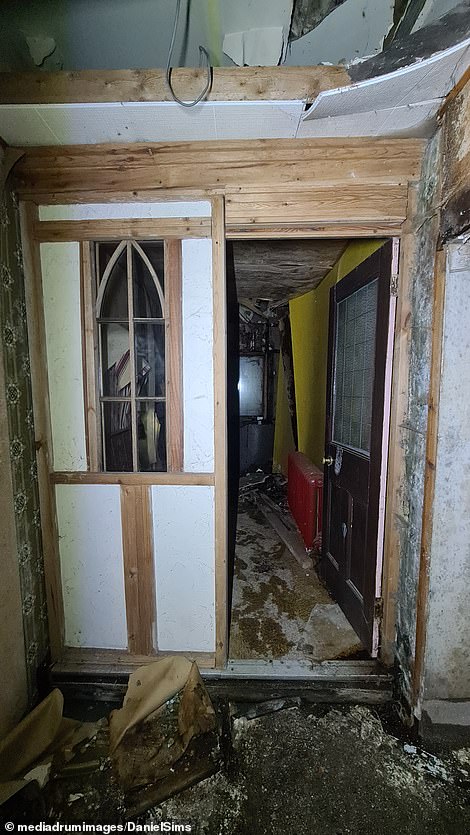 The degraded mansion used to be home to a huge collection of historical artefacts, including a gold ceremonial sword studded with opals that once belonged to Saddam Hussein 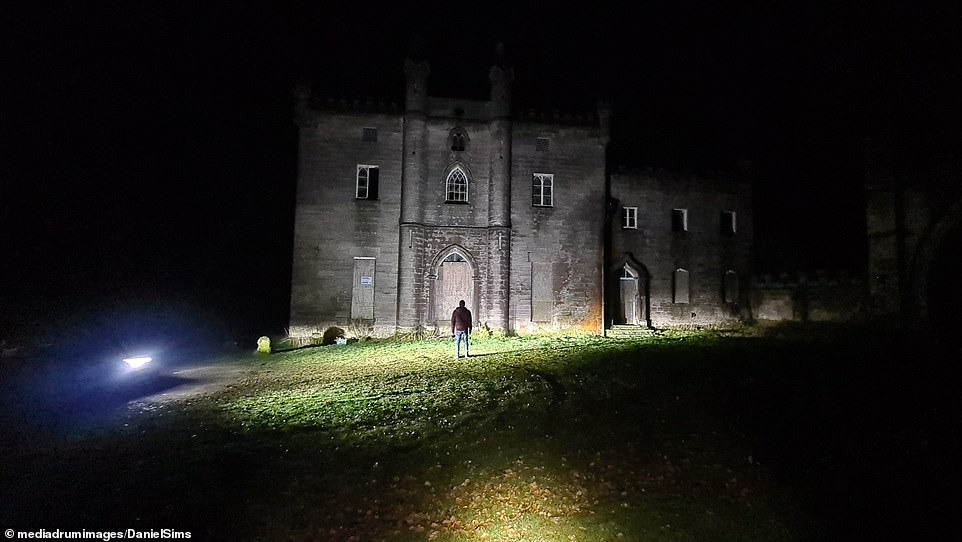 The Youtuber said: ‘We only spent about an hour on this exploration, it was quite a spooky building.

‘With the exploration we were quite nervous as the place itself is very old and creepy.

‘Now personally I do believe in supernatural occurrences however when I explore I try not to think about it as I find it quite scary.

‘Maybe I have seen too many horror films and heard and seen things on explores.

‘So with this I was standing in the middle of a room at the end of the explore taking photos and finishing up and I kid you not something barged past me and knocked into me but obviously there was nothing there so it definitely freaked me out.

‘After hearing about the place and history it makes you think the place could be haunted.

‘Definitely the old bed dating to the 15th century I think it was interesting and seems it had been converted at some point and the random hand dug tunnel was definitely surprising.’