Exhausted, yet full of hope: Colorized portraits bring to life the 19th century Gold Rush migrants who flooded to California in search of a life-changing fortune

These haunting color photographs bring the lives of the California Gold Rush migrants to life.

Matt Loughrey handed colored 13 daguerreotype images of the California Gold Rush from around the 1850, breathing fresh life into one of the turning pointing in the history of America.

The 40-year-old from the west coast of Ireland colorized the stunning images as part of the ‘My Colorful Past’ project, which aims to bridge a gap between history and art.

These pictures shed new light on the rush that ignited in January 1848 and sent 300,000 flooding to California in pursuit of their fortunes.

The images originally taken on daguerreotype – a tin-type processes on metal surfaces and later onto glass and paper – document the migration towards the West Coast, which lasted for seven years until 1855.

Loughrey used a technique called SMTM, which is an algorithm that understands the relationship between monochrome shades and equivalent hues of red, green and blue to color the images.

The technique is said to be accurate beyond 90 per cent, with the photographs took just over two weeks to bring to life and will be part of a larger visual documentary arriving early next year.

My Colorful Past project is also on Instagram with nearly 16,000 followers and includes colorized pictures throughout history. 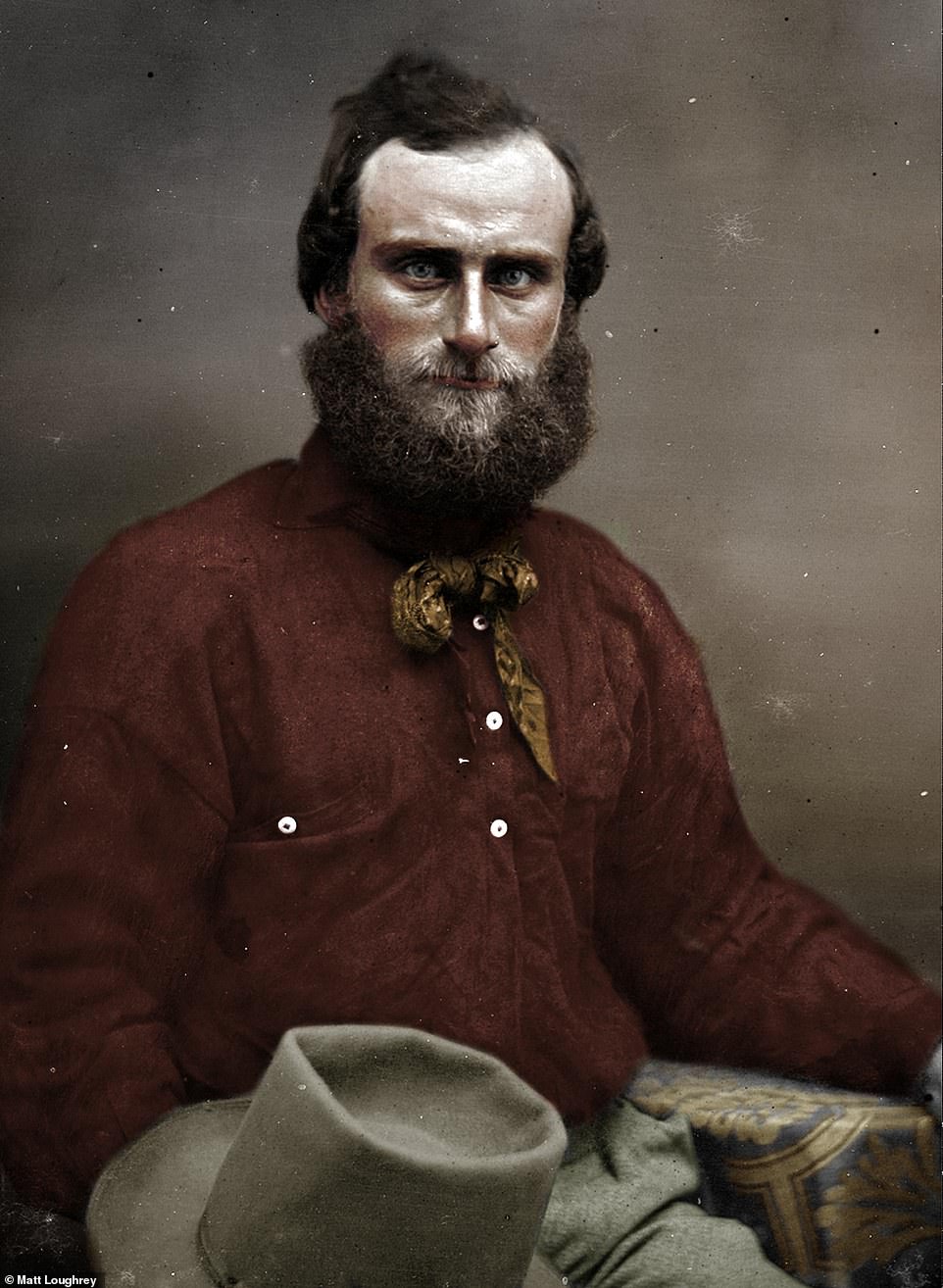 A daguerreotypes portrait of a Gold Rush prospector in 1850. The California Gold Rush began on January 24, 1848, when gold was found by James W. Marshall at Sutter’s Mill in Coloma, California and lasted until 1855 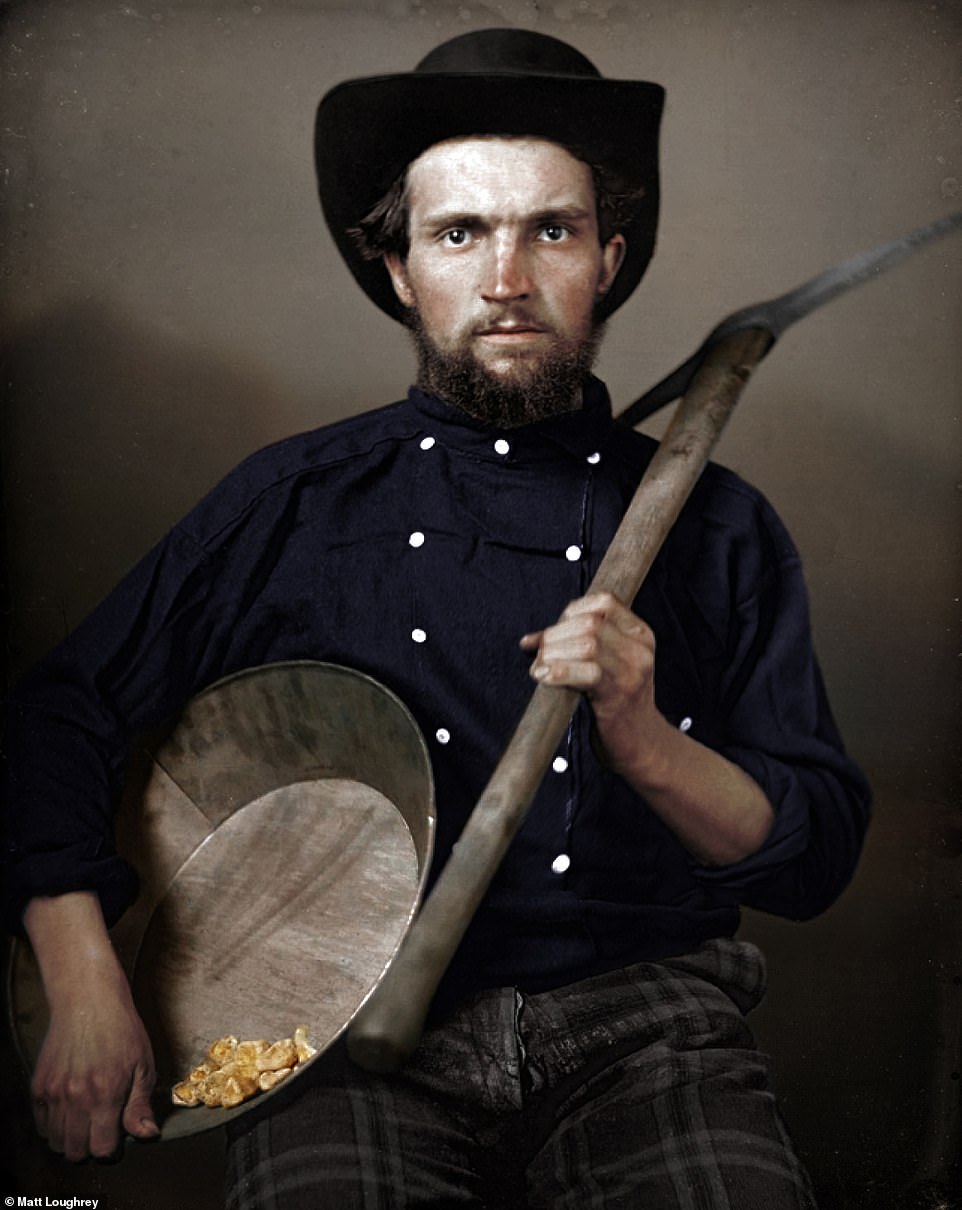 Portrait of an unknown gold miner posing with an axe and nuggets of gold in a pan in 1851. The news of gold discoveries brought around 300,000 people to California from the rest of the United States and around the world in the hunt for gold 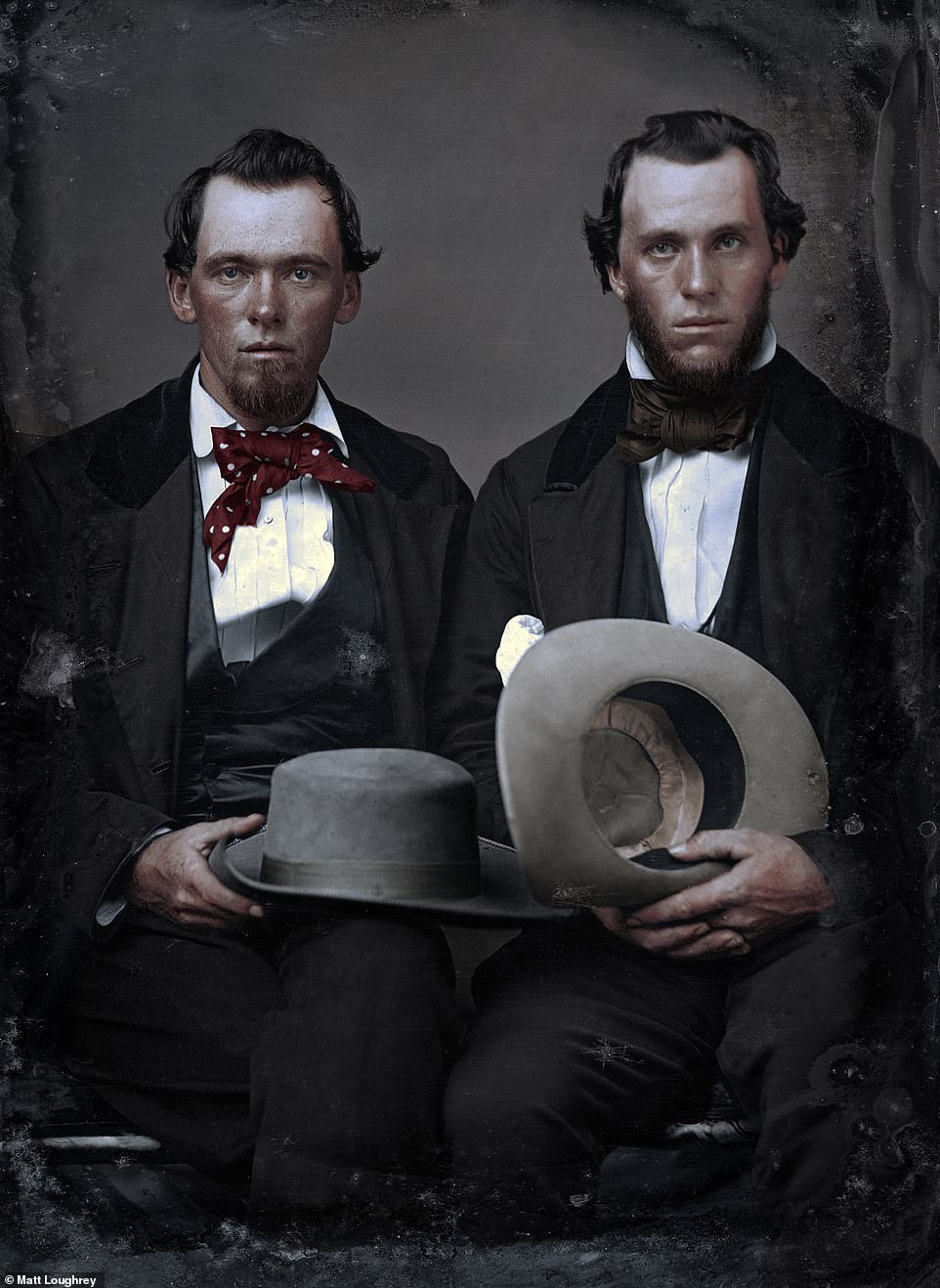 Unidentified brothers during the Gold Rush, circa 1850. California prospectors were referred to as ‘forty-niners’, as 1849 was the peak year for Gold Rush immigration to the state, with the San Francisco football team bearing their name in tribute to this day 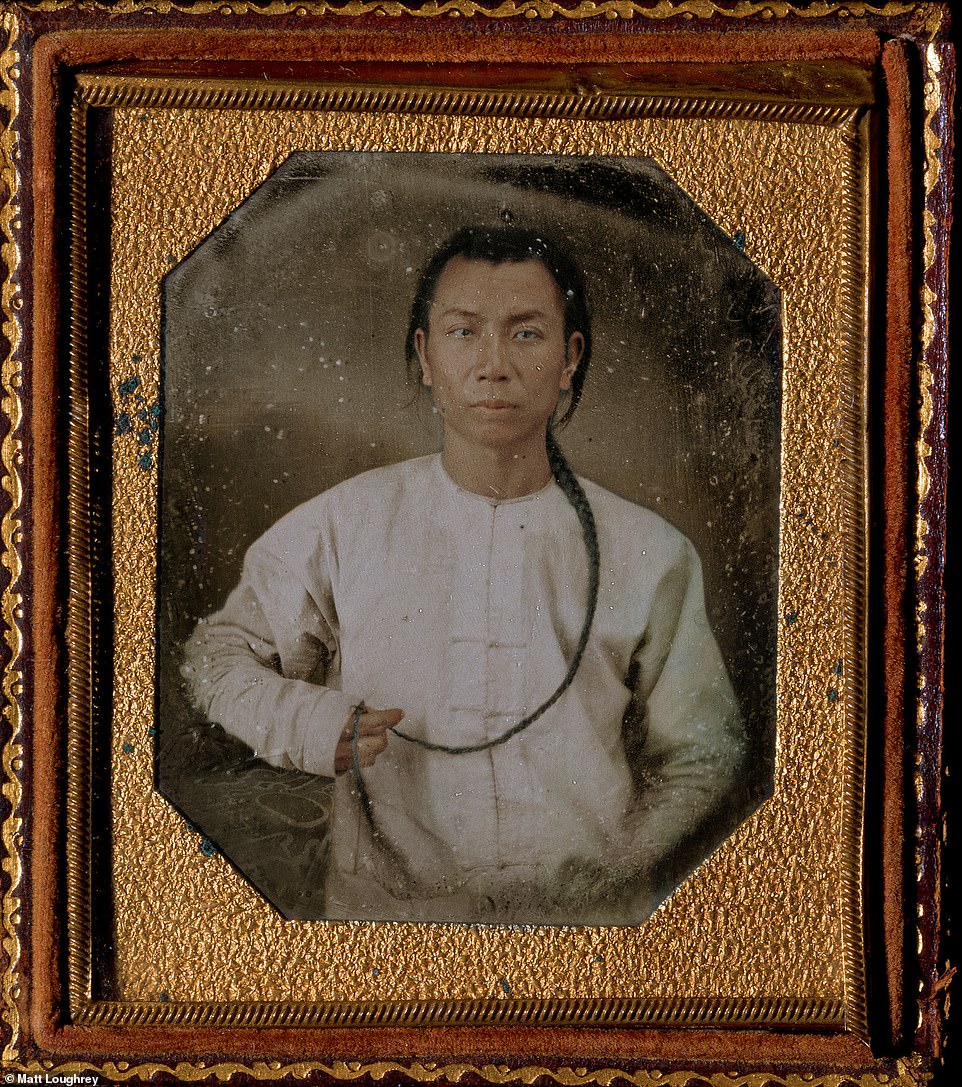 A portrait of a Chinese man in 1853. The gold rush attracted thousands of prospectors from Latin America, Europe, Australia, and China seeking their fortunes in the mines 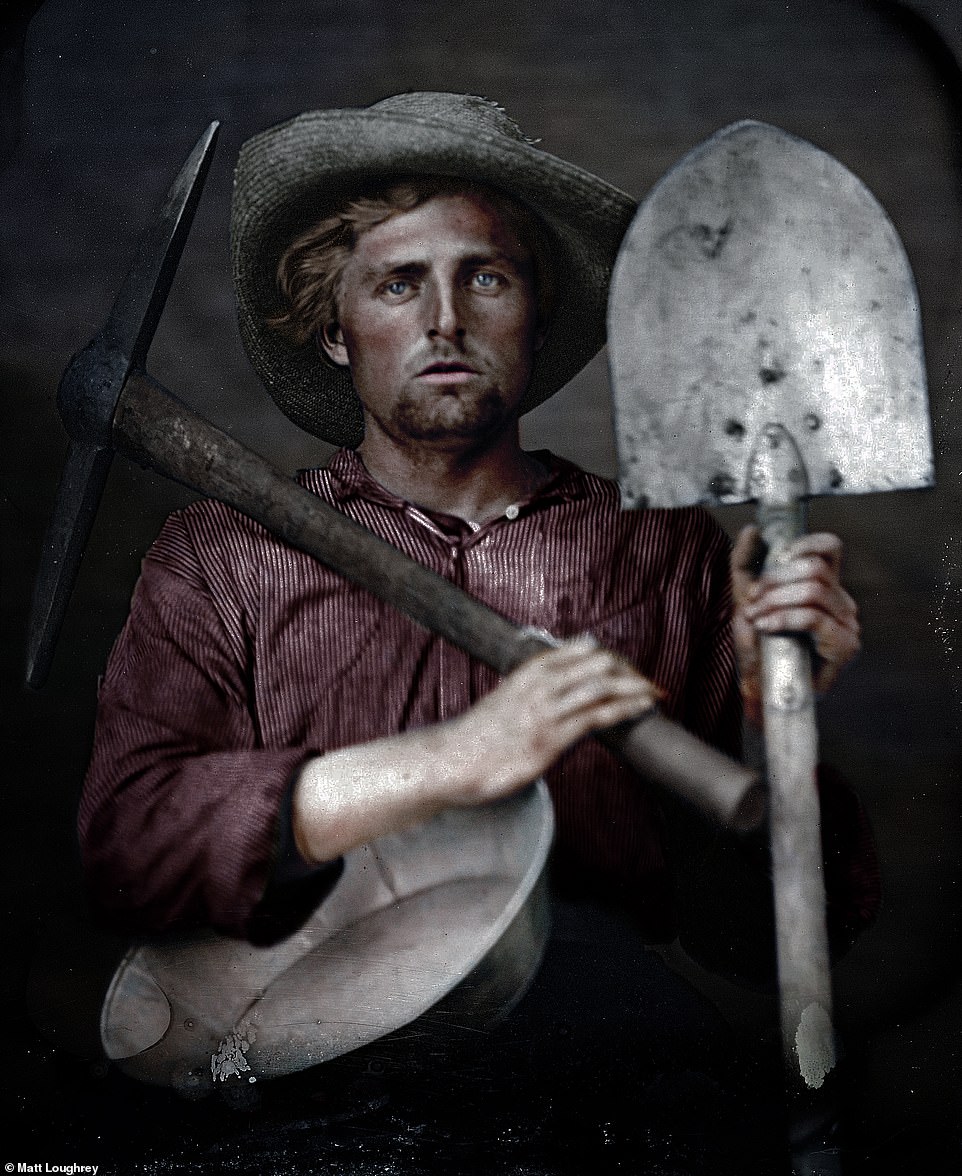 A Gold Rush miner posing with tools In 1851. The young miner looks at the camera, defying the conventions of portrait daguerreotype photography at the time, along with his shovels and sieve, the tools that discovered gold in the 1849 Gold Rush in California 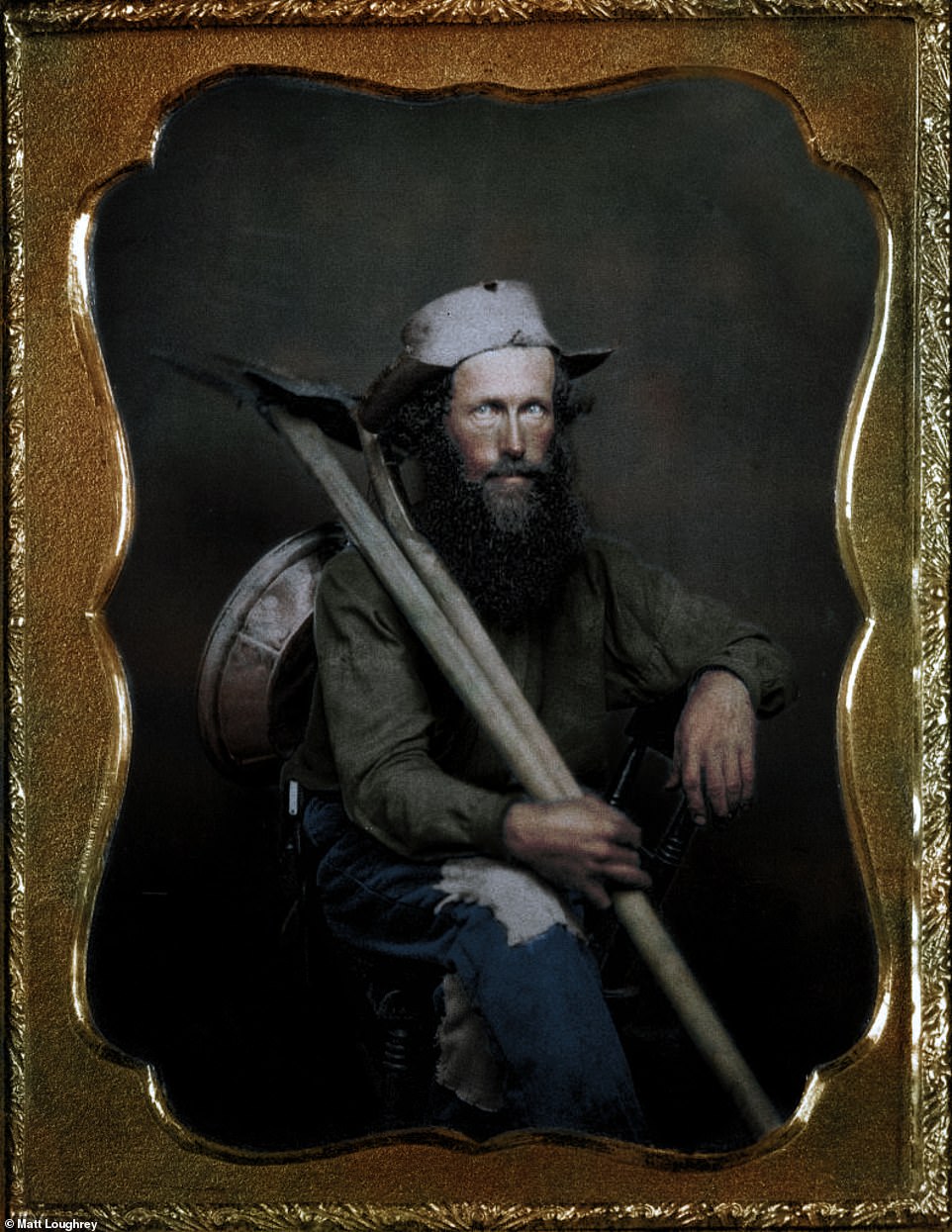 A gold miner and his tools. The California rush beckoned all kinds of people to the Western shores and lead to a boom for the American economy as gold flooded into the market 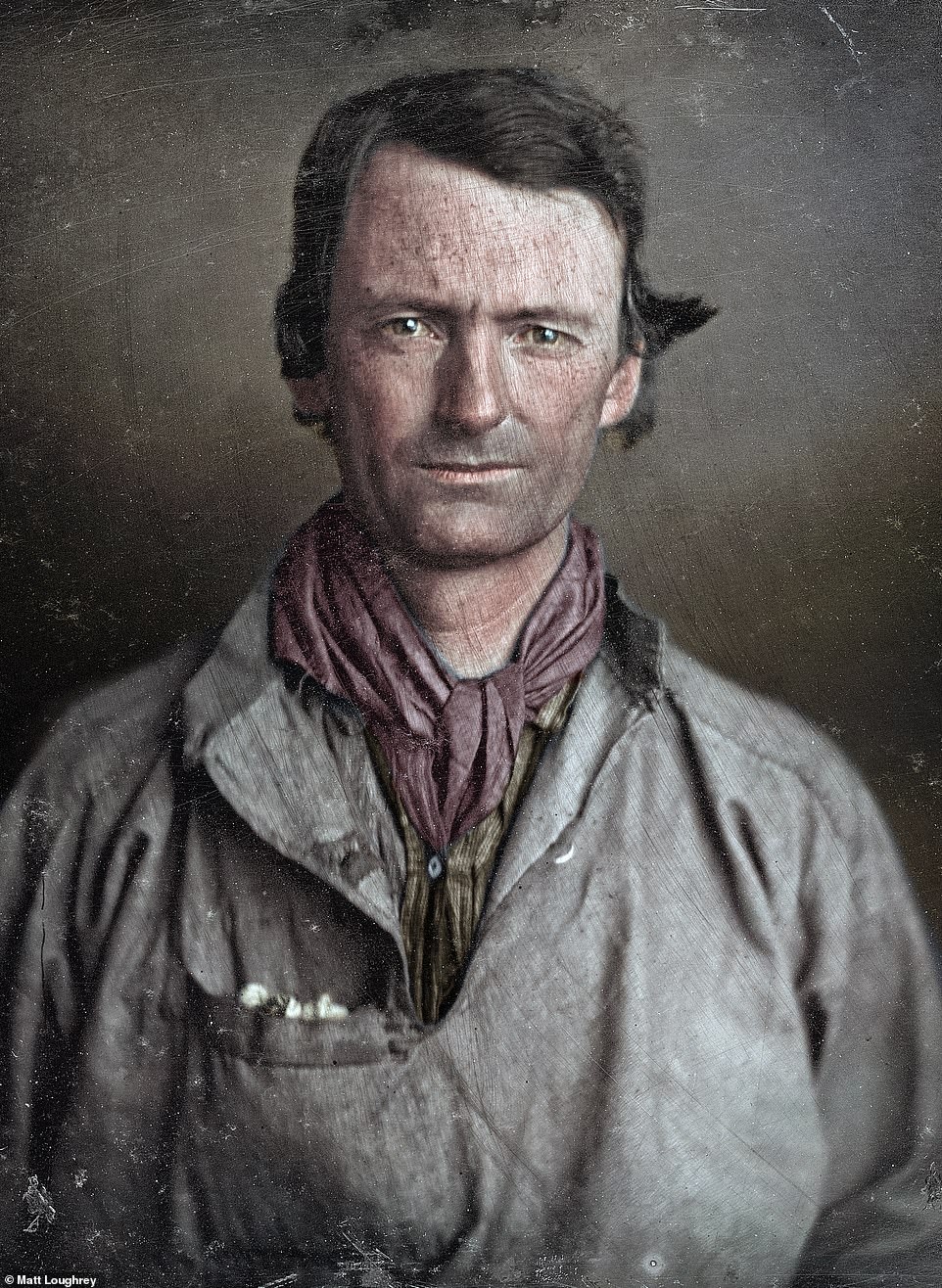 An unidentified California gold miner in 1850 (attributed to photographer Robert H. Vance). The daguerreotype portrait was the first publicly available photographic process and the most popular form of photography during the Gold Rush era and was created using a sheet of silver plated copper to a mirror finish 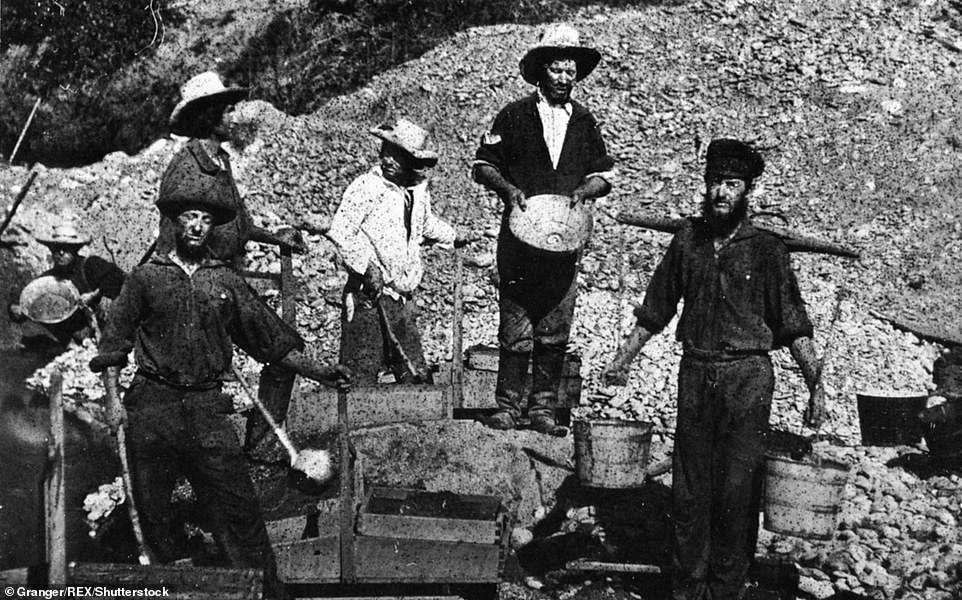 Placer miners taken on daguerreotype in around the early 1850s, California. The Gold Rush had severe effects on Native Californian population and resulted in a decline in numbers from disease, starvation and displacement from their lands 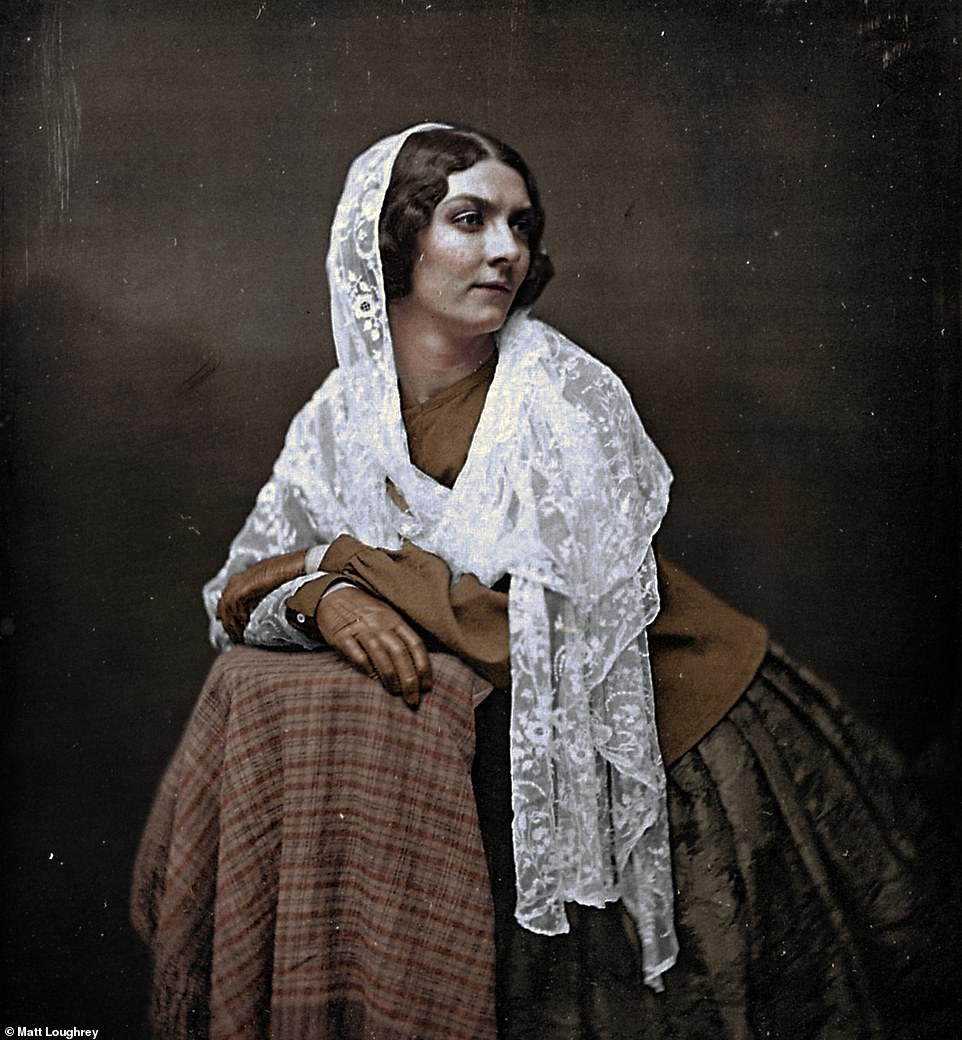 A woman posing in portrait in the 1850s. Loughrey said: ‘Reading about the [current] droughts in California and how they have ushered in a new wave of pioneers searching for gold, I thought it fitting to revisit the origins of the subject’ 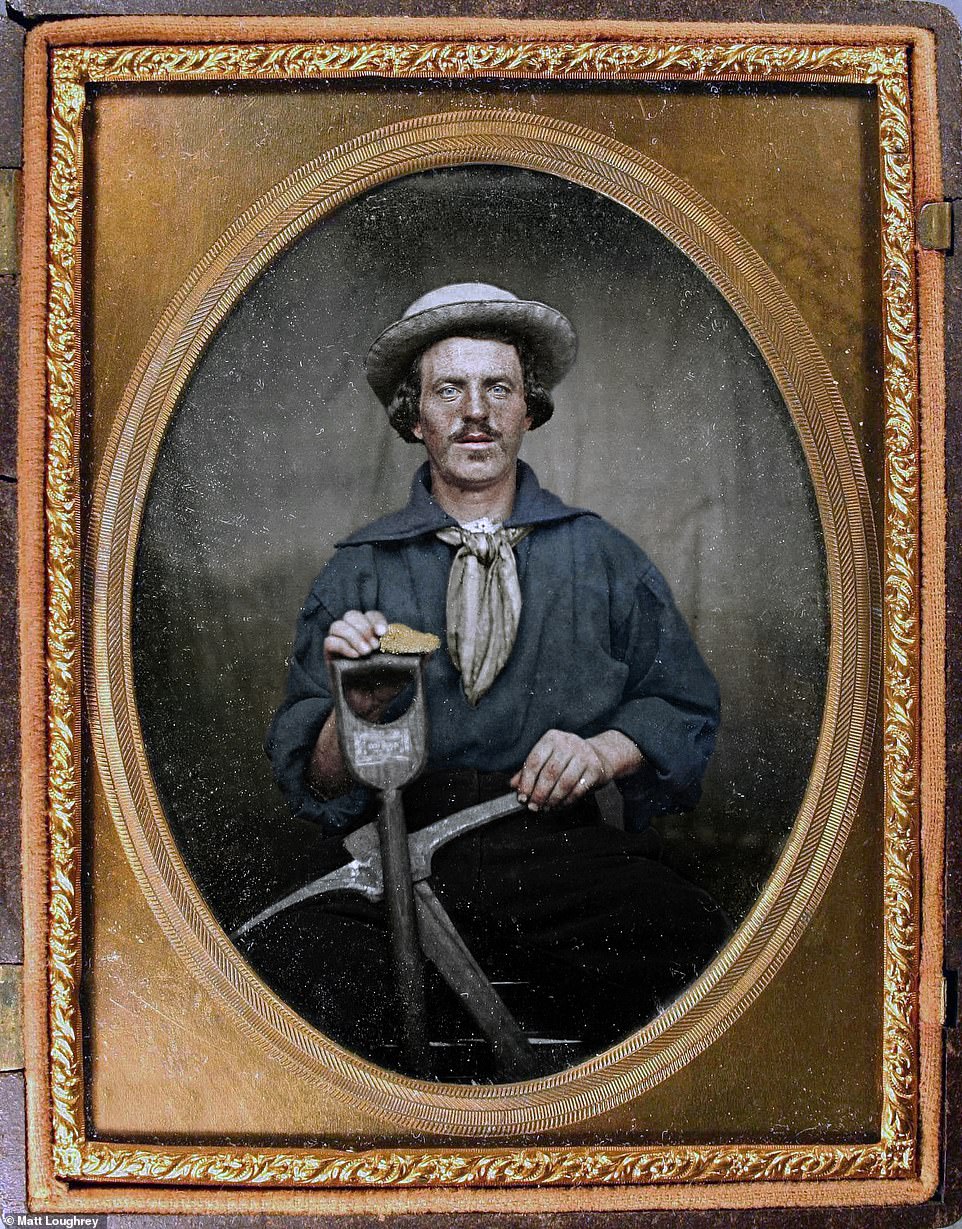 A portrait of Daniel J. Butler with gold and mining tools in 1850 by an unknown photographer. Around half of the Gold Rush migrants arrived by sea and half came overland on the California Trail and the Gila River trail 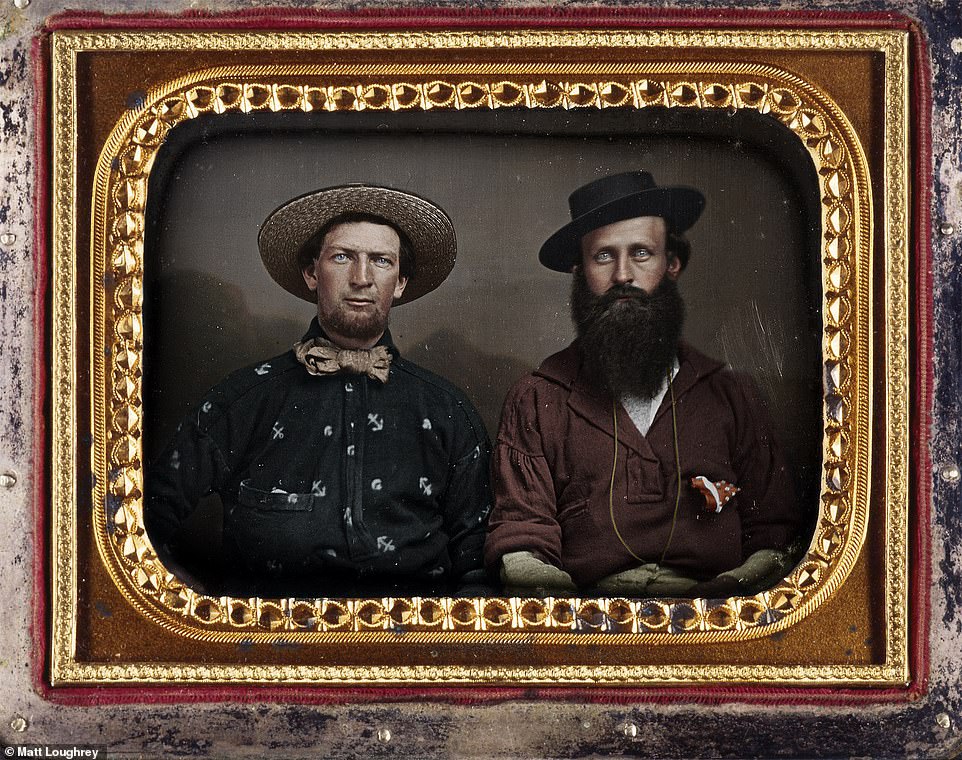 Portrait of two prospectors in the early 1850s. By the end of the gold rush in 1855, California had gone from a sparsely populated former Mexican territory, to having one of its first two U.S. Senators, John C. Frémont, selected to be the first presidential nominee for the new Republican Party, in 1856 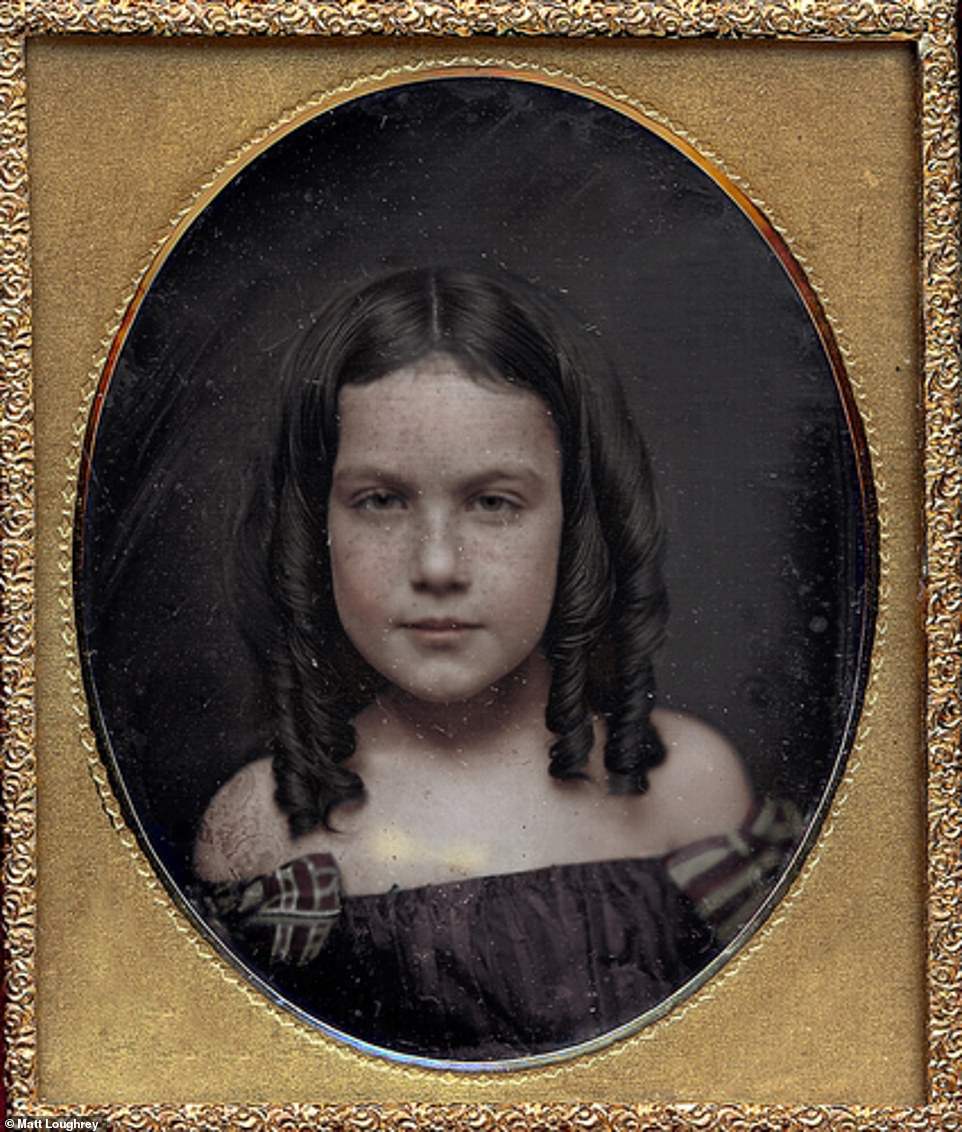 A young girl pictured during the Gold Rush (the pictures is attributable to photographer Robert H. Vannce). Loughrey said: ‘These daguerreotypes were found some time ago and have been in the back of mind to color ever since. The entertainment factor is all well and good, but the crux of the issue is making history more relatable to younger minds especially’ 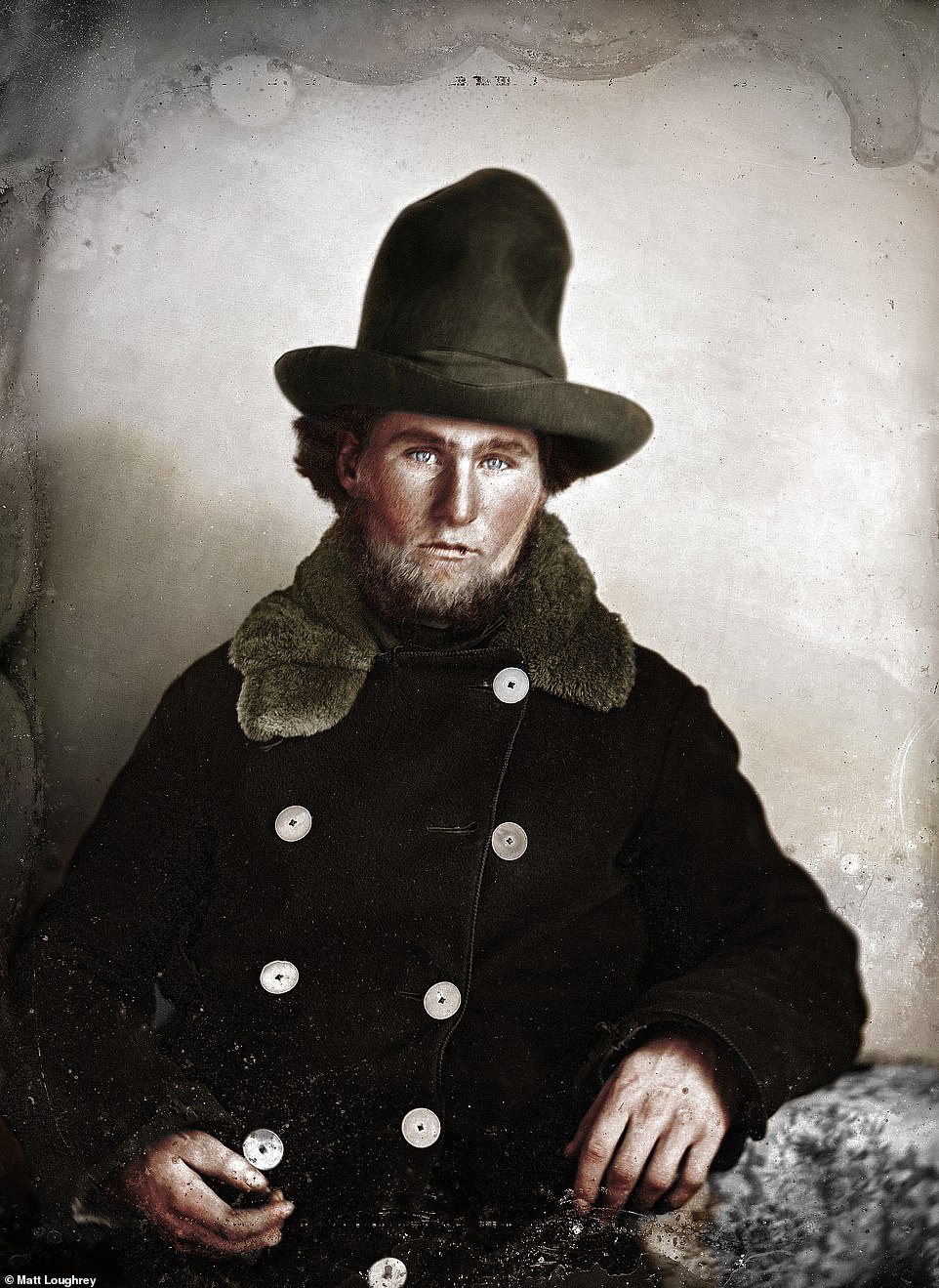 An unidentified California gold miner in 1852. San Francisco grew from a small settlement of about 200 residents in 1846 to a booming town of about 36,000 six years later in 1852, with new roads, churches, schools and other towns also built throughout the state as migrants flooded west 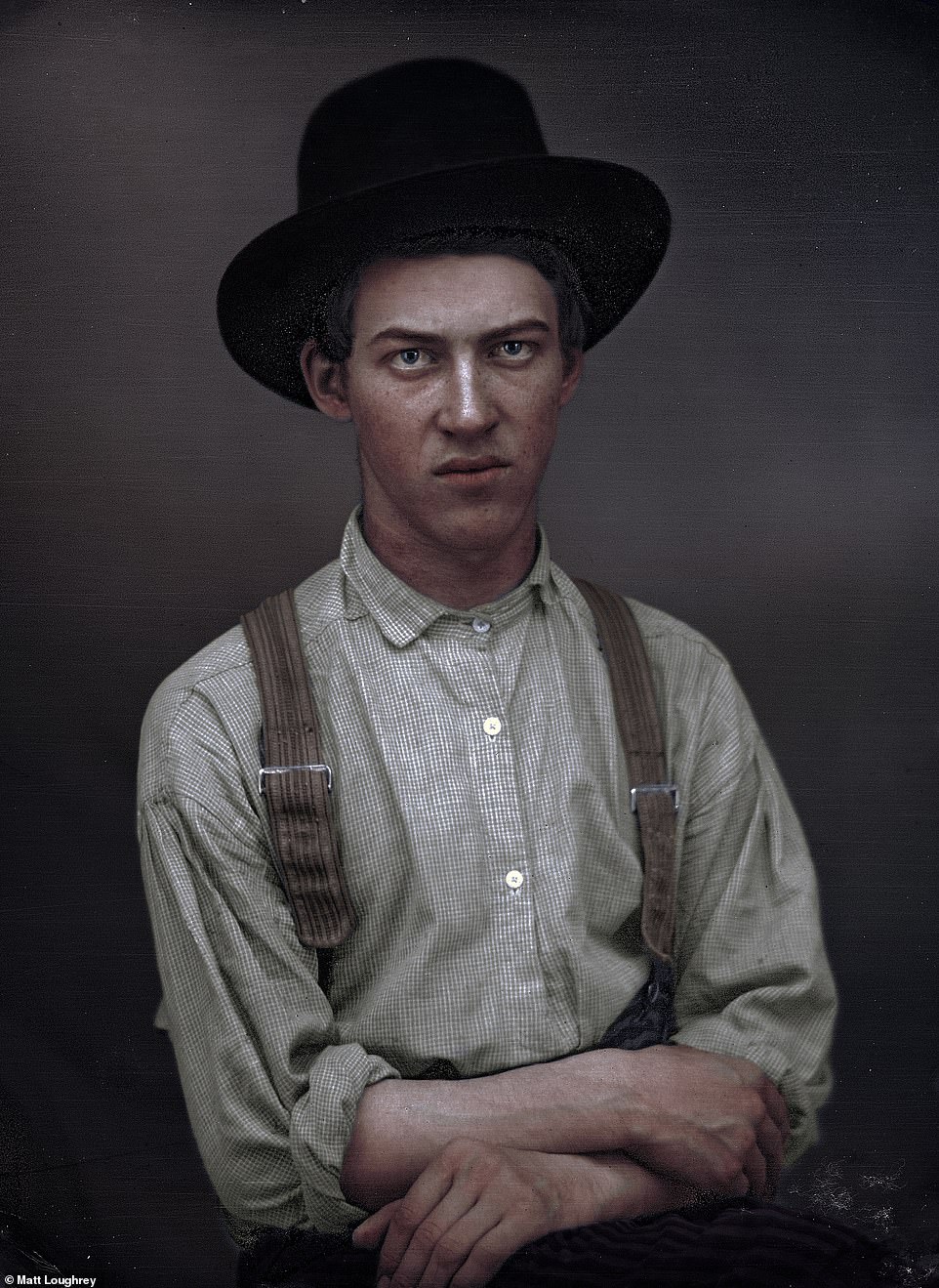 A California gold miner in 1850 (most likely photographed by Robert H. Vance). Loughrey added: ‘I am completely self-taught when it comes to colorization and as an educational tool I see it as very positive. I would urge any interested persons to take a look and see for themselves what’s possible, they’re guaranteed to see people in history in a far more relatable way’ 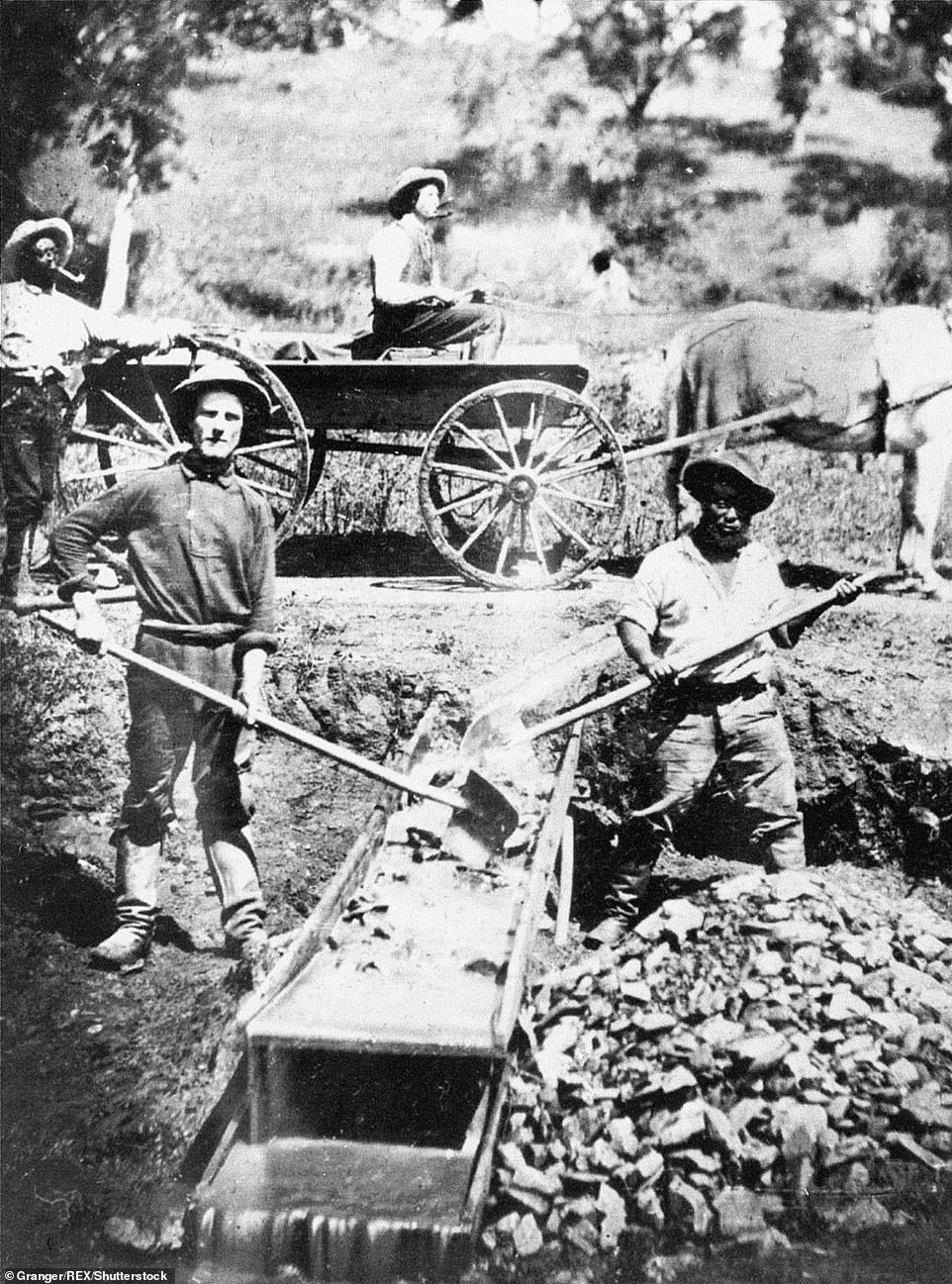 Gold Miners prospecting in Spanish Flat, California, in 1852. At the beginning of the Gold Rush there was no law regarding property rights in the goldfields and a system of ‘staking claims’ was developed, whereby prospectors retrieved gold from streams and riverbeds using simple techniques such as panning for the precious metals