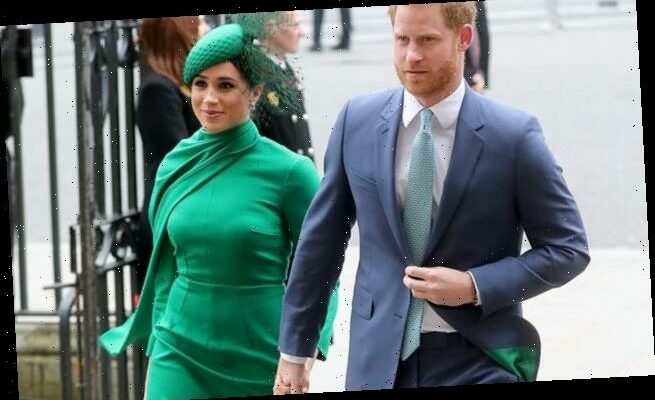 Prince Harry claims he and Meghan were subjected to the ‘mothership of harassment’ in a new interview where he says social media is to blame for the MAGA riot at the Capitol and the ‘destruction of the Amazon’ in a new interview, and that we are all part of a ‘human experiment’.

Harry was interviewed by Fast Company for an article published on Friday which is in a lengthy Q&A format.

It’s unclear when or how the internet took place but he gives long, intense answers where he talks about the ‘guiding principle’ of his life (the duty to truth and alleviation of suffering) and ‘the current consequences of the digital space’.

He also shared his views on how to reform it and says he and Meghan spent most of 2020 consulting experts about it.

Harry – who is now making millions through podcasts on Spotify and shows on Netflix after quitting royal life which would never have allowed him to rake in such money –  urged big tech not to be driven by money.

‘There has to be accountability to collective well being, not just financial incentive,’ he said.

He labeled big tech the ‘incredibly powerful and consolidated gatekeepers’ and says social media has become the root of violence and confusion because it plays host to so much disinformation.

Harry, in his interview, said he and ‘his wife’ had ‘no social media to quit’ and that it was fabricated by ‘a Rupert Murdoch newspaper’ but that they’ll return to it ‘when it’s right for us’.

Sources close to the pair said that they’d given it up as a tool for promoting their projects. Royal and branding experts have speculated the decision may be financially motivated because they become less accessible without it, and therefore more expensive.

In a new interview, Prince Harry complains that he and Meghan were subjected to ‘the mothership of harassment’ when they got married and that social media spreads hate. They are shown in a recent Zoom appearance from their California mansion

‘We will revisit social media when it feels right for us—perhaps when we see more meaningful commitments to change or reform—but right now we’ve thrown much of our energy into learning about this space and how we can help,’ Harry said.

‘I lean on the experts to help give guidance on how to reform the state of our digital world—how we make it better for our kids, of course, but also for ourselves—now.

‘The answer I’ve heard from experts in this space is that the common denominator starts with accountability.

‘There has to be accountability to collective wellbeing, not just financial incentive.

‘It’s hard for me to understand how the platforms themselves can eagerly take profit but shun responsibility.’

‘With these companies, in this model, we have a very small number of incredibly powerful and consolidated gatekeepers who have deployed hidden algorithms to pick the content billions see every day, and curate the information—or misinformation—everyone consumes. This radically alters how and why we inform opinions. It alters how we speak and what we decide to speak about. It alters how we think and how we react.’

‘Consider setting limits on the time you spend on social media, stop yourself from endlessly scrolling, fact-check the source and research the information you see, and commit to taking a more compassionate approach and tone when you post or comment.

He claims the pair experienced the nasty side of social media when they got married.

‘That false narrative became the mothership for all of the harassment you’re referring to.

‘It wouldn’t have even begun had our story just been told truthfully.’

Later, he attributed world events like the January 6 attack on the US Capitol and the destruction of the Amazonian rain forest to social media sites too.

‘There was a literal attack on democracy in the United States, organised on social media, which is an issue of violent extremism.

‘It is widely acknowledged that social media played a role in the genocide in Myanmar and was used as a vehicle to incite violence against the Rohingya people, which is a human rights issue.

‘And in Brazil, social media provided a conduit for misinformation which ultimately brought destruction to the Amazon, which is an environmental and global health issue.’

Harry claimed that he ‘from an early age’, was guided by the principle of ‘the duty to truth, the pursuit of compassion and the alleviation of suffering.’

‘My life has always been about trying to do my part to help those who need it most, and right now, we need this change—because it touches nearly every single thing we do or are exposed to.’

He did not name any of the social media sites he has issues with, but calls on people to spend less time online.

‘Consider setting limits on the time you spend on social media, stop yourself from endlessly scrolling, fact-check the source and research the information you see, and commit to taking a more compassionate approach and tone when you post or comment.

‘These might seem like little things, but they add up. There’s a responsibility to compassion that we each own.

‘Humans crave connection, social bonds, and a sense of belonging.

‘When we don’t have those, we end up fractured, and in the digital age that can unfortunately be a catalyst for finding connection in mass extremism movements or radicalisation.

‘We need to take better care of each other, especially in these times of isolation and vulnerability.’