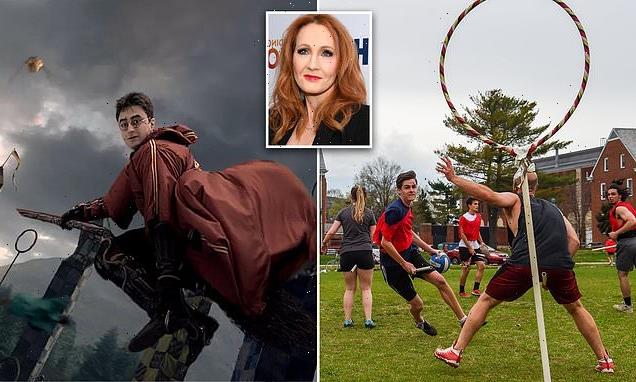 Now Quidditch ditches JK Rowling! Sport inspired by Harry Potter series will be renamed ‘Quadball’ to distance itself from author over her trans views

The name of the Wizarding World of ‘Harry Potter’ inspired sport, Quidditch, will be changed to quadball as the sport’s three governing bodies distance themselves from controversial author JK Rowling.

The Major League Quadball organization, formally known as the Major League Quidditch, announced the name change  on July 19, to distance themselves from Rowling who has made contentious comments on transgender issues, particularly against trans women.

‘We are confident in this step and we look forward to all the new opportunities quadball will bring,’ Chris Lau, chair of the IQA Board of Trustees, said. ‘This is an important moment in our sport’s history.’ 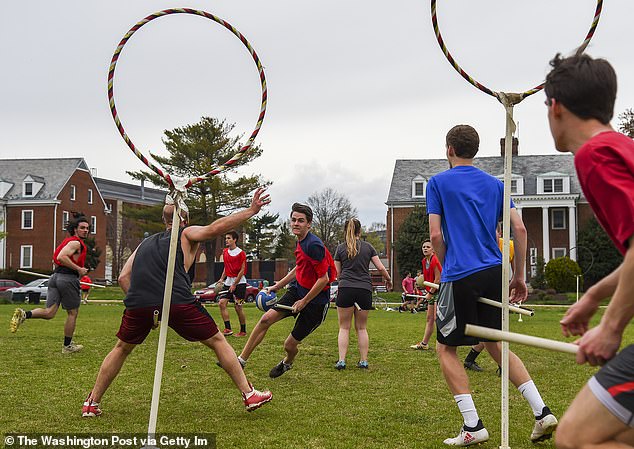 ‘Harry Potter’ inspired sport, Quidditch, to ditch it’s name to Quadball in effort to distance themselves from book author J.K. Rowling. The famous author responsible for the adaptation of the fictional game she made up in her novels has received backlash for her views on transgender people 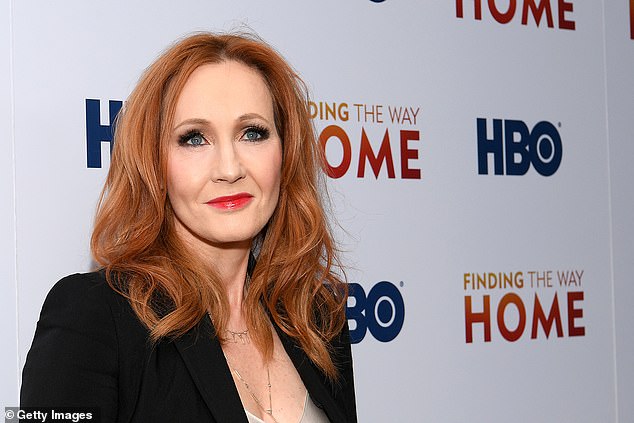 In addition to Rowling’s transgender views, the term ‘quidditch’ has been trademarked by Warner Brothers Studios, which produces the Harry Potter franchise, and ‘has limited the sport’s expansion, including but not limited to sponsorship and broadcast opportunities.’

The muggle-born organization that made the fictional game come to life, along with the U.S. Quidditch group, first announced the anticipated name change in December 2021 following the Rowling controversy.

The game was adapted to real life in 2005 after Rowling’s books inspired the game with two teams of seven plays running with broomsticks in a full contact sport. 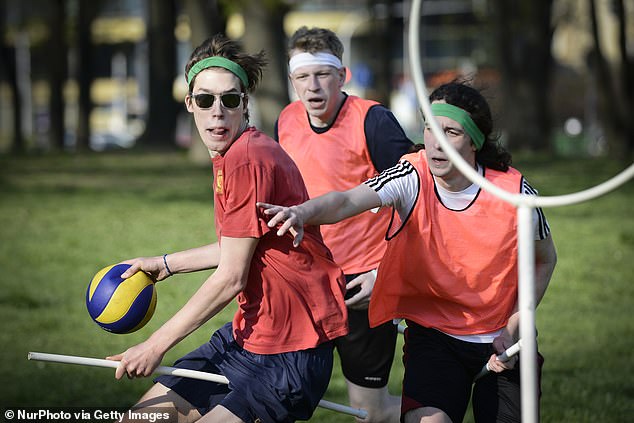 The real life version of Quidditch was adapted in 2005. Teams of seven gather to play the game while running around with broomsticks between their legs

The sport’s organization at the time claimed Rowling’s views on transgender topics limited the expansion of the sport brought to life by leagues.

Thousands of people play the fictional sport – minus the broomsticks – in 40 countries, according to the IQA.

Rowling, 56, received tremendous backlash and accusations of transphobia in June 2020 after voicing her views on trans women being granted access to female spaces and mocked an online article that used the words ‘people who menstruate’ instead of ‘women.’

Later in September 2020, she faced renewed calls of transphobia after it was revealed that the villain in her latest book, Troubled Blood – written under Rowling’s pseudonym Robert Galbraith – is a male serial killer who dresses as a woman to slay his victims.

The Daily Telegraph reviewed the 900-page novel and claimed the narrative ‘moral seems to be: never trust a man in a dress.’ This immediately led to online backlash for Rowling.

Actors from the ‘Harry Potter’ film have spoken out and slammed Rowling for her various remarks – including Daniel Radcliffe, Rupert Grint, and Emma Watson.

Last month, Warner Bros defended Rowling after Tom Felton, who plays Draco Malfoy in the beloved films, was prohibited from answering a question about Rowling in an interview.

Felton sat in silence when asked about Rowling’s absence on the 25th anniversary of Harry Potter and the Philosopher’s Stone.

A third-party PR team interrupted the silence saying, ‘next question please’ before later adding, ‘JK Rowling is not connected to Warner or Tom Felton, the team felt it was not relevant to the piece.’ 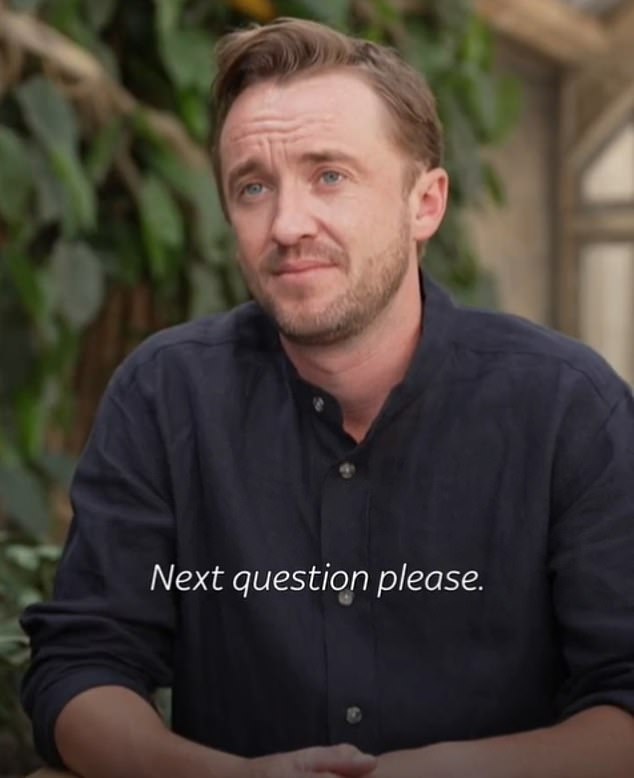 Harry Potter’s Tom Felton stared blankly after the reporter asked him to comment on JK Rowling’s absence during the anniversary celebrations. A third-party proceeded to ask for the next question 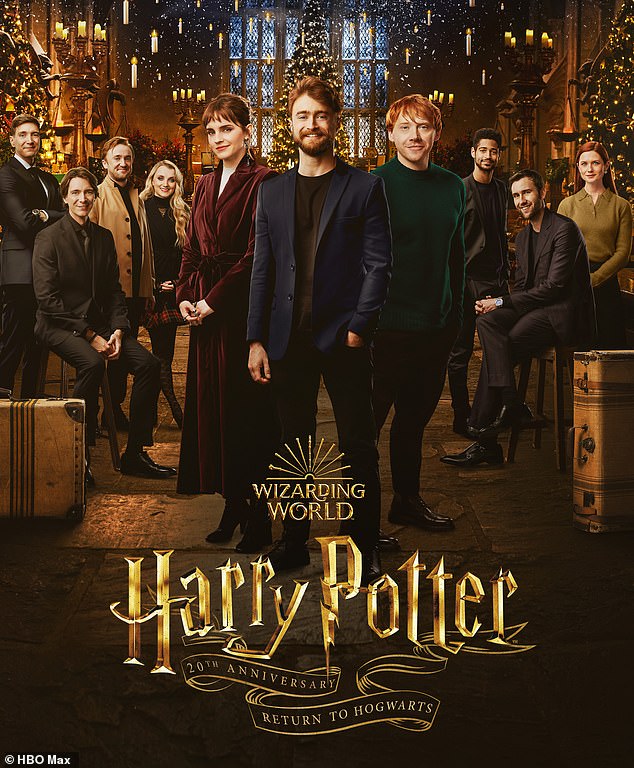 Warner Bros – who has worked with the author on the Harry Potter films and during the Fantastic Beasts franchise which recently had The Secrets of Dumbledore released and plans more films from the Wizarding World – was quick to defend Rowling.

Warner Bros previously told MailOnline it was ‘wholly wrong’ and said the studio is ‘proud’ of working with ‘one of the world’s most accomplished storytellers’ on both the Harry Potter and Fantastic Beasts series over the last 20 years.

The Warner Bros Studio Tour London also told MailOnline that ‘Warner Bros. has enjoyed a creative, productive, and fulfilling partnership with J.K. Rowling for the past 20 years.

‘She is one of the world’s most accomplished storytellers, and we are proud to be the studio to bring her vision, characters, and stories to life now – and for decades to come.

‘A statement was issued by a third-party media agency that appeared contrary to this view. The statement was wholly wrong, and Warner Bros. Studio Tour London regrets it happened as part of a media event that day.’